Home / Reviews / Gadgets / Oppo R9s and R9s Plus Review: Working within the safe and familiar

Oppo R9s and R9s Plus Review: Working within the safe and familiar 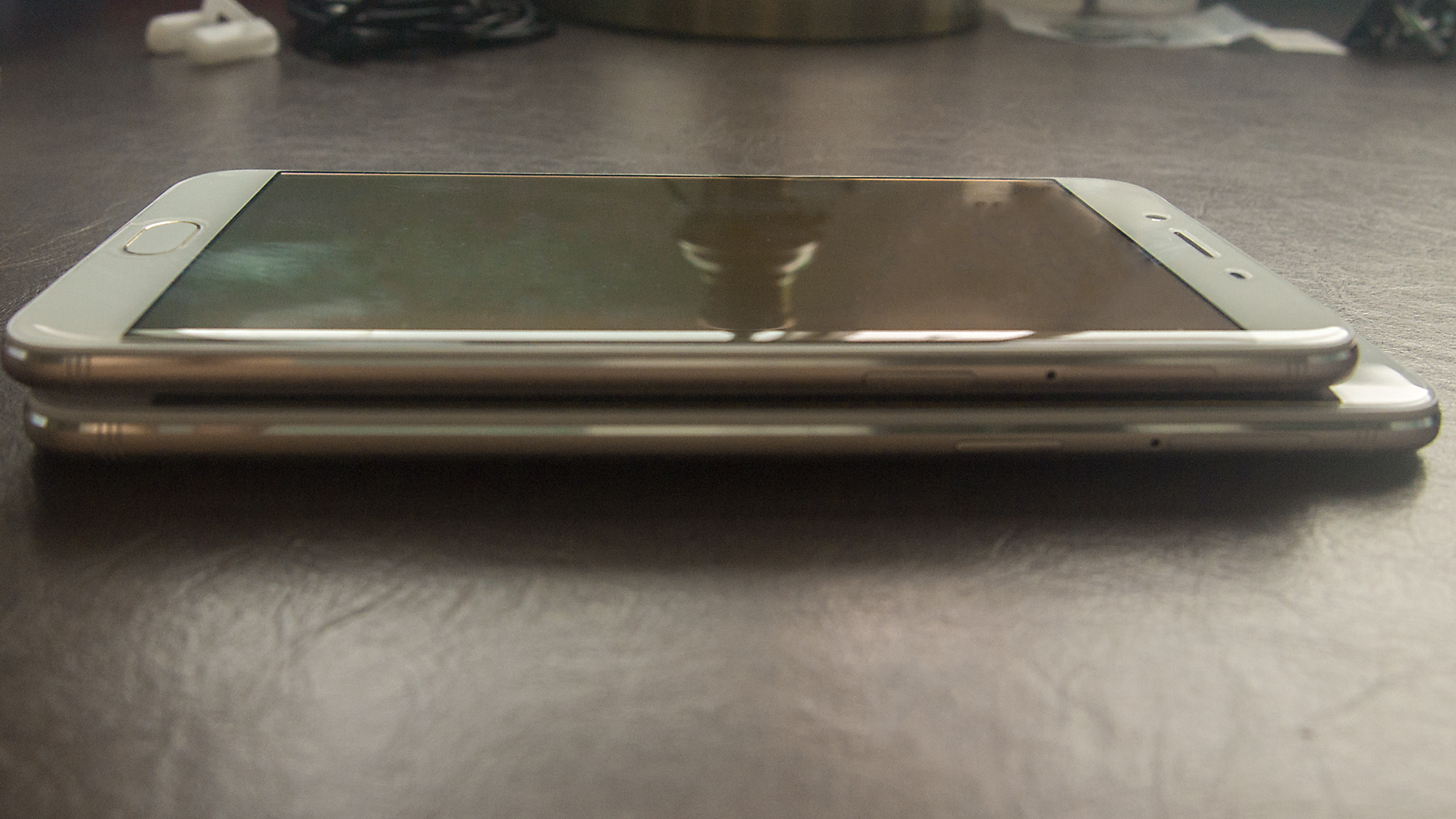 Oppo’s mobile phones may not hold the same consumer fixation as Apple or Samsung but they’re highly capable devices in their own right. Their latest offerings, the Oppo R9s and R9s Plus, are revisions of last year’s models. The changes aren’t minor nor superficial – other than price, there’s now little reason to pick up their predecessors. Even so, they’re not that expensive compared to other flagships, making them a good value proposition for anyone willing to break away from the crowd.

Feature-wise, there’s plenty to like in the 5.5-inch R9s or its larger 6-inch sibling. In fact, they make a great first impression due to the sleek design (it wouldn’t be out of place beside an iPhone or Galaxy Edge), and sublime fingerprint scanner. The phones wake with a light tap of the home button, which is now capacitive, and without fail. They’d be ready to go before I was, even when my thumb was tacky from our stubbornly humid weather. It’s a minor thing on paper but, in the same way SSDs have altered our expectations of PC speeds, it’s a perk most noticeable when returning to fussier, less sensitive scanners.

The other basic to consider are the 16-megapixel cameras on both the back and front, retaining Oppo’s reputation amongst the selfie crowd. The f2.0 front comes with Beauty mode once again to help smoothen complexions, while the rear-facing camera’s upgraded MP count makes it suitable for day-to-day use, boosted by its large f1.7 aperture for low-light and a dual phase detection autofocus to keep things fast and sharp. That being said, there are traces of shutter lag from time to time, something to keep in mind when shooting fast or twitchy subjects. As for video, the phones are capable of shooting 4K (2160p) or 1080p but locked at 30 fps – although the former is a plus point, don’t bank on it being the best around in consistency.

It’s all about entertainment over here, so our greater interest lies in the display, battery life, and overall performance of the R9s and R9s Plus.

Both phones sport a 1920 × 1080 display resolution brought to life by an AMOLED panel rather than LCD. There are pros and cons to each, with R&D always pushing things forward, but AMOLEDs are currently leading in terms of accuracy, color, contrast, and legibility. In sunny Singapore, that counts for plenty – watching videos (be it the latest K-drama, a downloaded Netflix episode, YouTube or whatever else you view on commutes) is a joy to do so on these Oppo phones. Squinting and awkwardly tilting the screen to check bus timings or GrabCar maps is now less of a daily struggle, and if you’re gaming, the vibrant colors are sure to be noticed. Needless to say, brightness is never an issue indoors, with a handy eye-saving filter tucked away in the pull-down settings drawer.

The visual treatment is paired with Oppo’s partnership with Dirac Technology to bring speaker optimizations and three-slider EQ in the sound department. I’m happy to report that the phones support FLAC for lossless playback and has a 3.5mm audio port for headphones. Discerning users won’t be using these models as digital audio players (sadly, I didn’t have the Oppo HA-2SE to pair it with) but there’s certainly nothing to complain about for non-music applications, offering good volume and clarity.

When it comes to battery life and performance, however, the two phones will vary fairly drastically due to their choice of hardware. The phones are responsive and snappy for the most part, though diving into more intensive tasks will quickly reveal their differences.

The R9s uses a 3,010 mAH battery to stunning degrees, aided by its power-efficient Snapdragon 625 chipset and a lower-spec Adreno 506 GPU. That doesn’t cripple the R9s per se but it does mean that you won’t get consistent or amazing performance you’d expect from a brand new phone, placing it more in line with mid-range expectations. It’s something to think about if you’re a heavy mobile gamer, especially if you’re going to tax it with loads of visual effects. On the flip side, the low-power components and Oppo’s ColorOS 3.0 battery saving functionalities make it a clear winner for folks only concerned about video or phone uptime, going as far as to eliminate the need for a portable power bank.

If it’s gaming you’re after then you’ll have to leap for the larger R9s Plus for the Snapdragon 653 and Adreno 510. It’ll handle many of the popular mobile games well even when inundated with plenty of 3D assets or VFX. Unsurprisingly, that comes at a cost to battery endurance. Despite the 4,000 mAH capacity you still won’t be close to the extraordinary runtimes of the smaller model, but that’s an absurdly high bar to begin with – in practice (a mix of texting, browsing, video, and games), the R9s Plus will get you through the day and a little extra just fine.

In either case, recharging is a breeze with Oppo’s proprietary VOOC Flash Charge technology (outfitted in micro USB), getting phones from zero to around 70% in under 30 minutes. We won’t delve into what’s different on an electrical level but what it does do is retain fast charging speeds even when the phone is in use. Typically, plugging in a phone while watching a video or gaming negates any fast charge benefits, yet VOOC manages to do so without your phone or hands burning up. I wouldn’t interpret that as approval to do so on a daily basis, purely out of battery health concerns, but it’s a feature that’s there when needed.

Unfortunately, all batteries degrade over time and we can only guess as to its durability after six months, a year, or longer.

In my eyes, choosing whether to pick the Oppo R9s or R9s Plus boils down to intended use: videos or games. The 5.5-inch R9s outshines the competition with its marathon-like battery endurance, providing enough juice to let you watch episodes or movies back-to-back on long flights and other stints – active National Service men, this one is for you.

That puts the 6-inch R9s Plus in a bit of a tough spot, as it doesn’t do anything particularly exciting. The series’ strengths are in implementing currently available features well (see: fingerprint scanning, a 16 MP front camera, fast charging) and the Plus stuffs it with respectable components. While that’s enough for practical old me, there’s an undeniable desire in chasing after the premium and exclusive. Oppo just isn’t quite there yet, though at this rate it’ll be sooner rather than later.

Also, depending on how integrated NFC is in your life, it’s worth pointing out that neither model supports it. Given the rise of contactless payments that may just be a deal breaker for some. Let’s hope they fix that – and find a phone design to call their own – with the next release.

Pro: Good balance between looks and performance
Con: Lacks a standout feature or trait associated with other flagships

Ade thinks there's nothing quite like a good game and a snug headcrab. He grew up with HIDEO KOJIMA's Metal Gear Solid, lives for RPGs, and is waiting for light guns to make their comeback.
Previous post Torment: Tides of Numenera (PS4) Review
Next post Ghost In The Shell: A step forward for Hollywood-Japanese adaptations