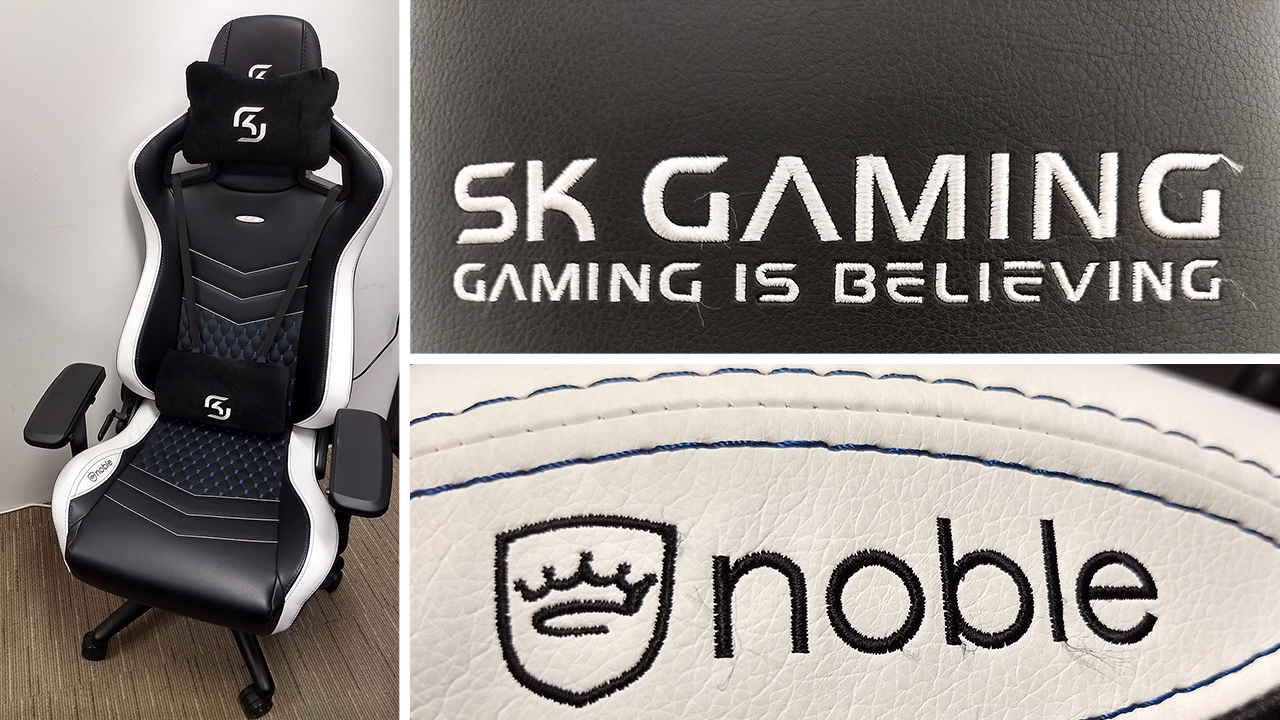 Chairs have grown into a hot business for gamers everywhere, their popularity propelled by esports and a tide of streamers vouching for their comfort. Where pioneering brands such as DXRacer once dominated the scene, the market has since exploded with new players from all over the world.

Germany-based noblechairs is one such company. Travelling all the way to our office is the special SK Gaming edition chair, dressed in black, white, and traces of blue. This esports tie-in is largely modeled after noblechairs’ EPIC line with its polyurethane leather, cold foam upholstery, and steel frames — the base series comes in a multitude of color options, something to consider if you’re not so hot on the black-white contrast or SK Gaming. Foregoing the special edition route also opens up premium options, such as swapping the faux leather with “precious real leather.”

Like it or not, bucket-style seats are attention-grabbing in any indoor setting, making aesthetics matter a little more than they ought to. With that said, noblechairs’ SK Gaming edition cuts a fine first impression, the whites limited to logos and a five-inch trim on either side of the backrest and seat. Everything else comes in matte black, so the only things catching the light are the zipper, the armrests’ extendable stem, and the slight sheen of the leather. It’s not as loud as some of the competition but, to be fair, if you’re buying a team-affiliated chair then you’d probably want to show off the fact.

Closer inspection reveals the blue-stitched diamond patterning on the seat and lower backrest. It’s not merely for visual interest, as noblechairs claims the pockets help to improve airflow to that region, typically the stuffiest part of a chair. Being Singaporean, we’re fairly resilient to heat, but the chair never grew uncomfortably warm after long sessions. Bear in mind, however, that we also used the chair exclusively in an air-conditioned office.

On the topic of heat regulation, noblechairs employs cold, open-cell foam for breathability. It’s not particularly unique given the rise of bucket seat gaming chairs, but it is a ticked checkbox on the list of expected features. Perceived firmness, on the other hand, tends to be a little more subjective between manufacturers. The foam on the SK Gaming model manages to deliver for both upright productivity and reclined gaming, and is certainly worth the price bracket it falls under. It takes some getting used to if you’re coming from sub-$300 chairs, but once you’ve settled in you’d be hard-pressed to go back, and especially not to the cheaper and softer options.

There’s much more to consider when it comes to comfort though, and chairs like these demand some familiarization and an initial set-up. Two velour pillows are provided for the lumbar and neck; while I don’t particularly care for the latter due to its thickness, pushing my head forward more than than I’d like, the lumbar pillow is one of the better ones sampled. It’s vertical position is adjusted by a pair of buckled straps, an important consideration since the whole point of it is to support your back’s natural curvature.

Oddly, the pillow winds up overlapping with the diamond-stitched pockets mentioned earlier, though my biggest wish was for there to be a quick-release of sorts — I may not always want a lumbar pillow around when I’m relaxing.

Thankfully, everything else is easy to tweak and adjust. An impressively sturdy lever to the right releases and locks the backrest, it’s position easily distinguishable from the height adjustment lever under the seat to prevent mix-ups. Three buttons dotted around the armrest lets you set their height, rotate them towards or away from your body, and slide them forward or back. They’re definitely a huge improvement over fixed armrests when it comes to typing or gaming with a controller.

Beyond that, noblechairs’ SK Gaming model relies on its racing contours for getting you comfortable. This is where things get a little tricky because, like clothes, either you fit the average dimensions or you don’t. This is even more apparent on a bucket seat, which are designed to keep you snug and secure with little to no movement. Our office — fairly similar in builds — didn’t have any trouble with it, though the seat was a little too deep for my liking, with the edge just about to graze the back of my knees. If that’s something you face fairly often then this is a chair you’ll definitely want to sample first, especially since there’s no seat pan adjustment (a feature only seen in pricier alternatives).

The company listing states that the chair can support up to 120kg.

It’s hard to speak about the chair’s construction and durability without putting it through a year’s worth of use, but it’s held up as expected in the weeks since we’ve had it. The cushions haven’t lost their firmness, there’s nothing amiss on the PU leather finish, and there’s no creaking or unwanted resistance from any of the levers and buttons. Yet there is some bad news if you’re lusting after the SK Gaming logos: the embroidery has started to fray. It’s not unraveling into a loose mess per se, just some noticeable threads that can be fixed with a quick snip or two.

At $339, noblechairs’ EPIC SK Gaming is a respectable entry into the world of premium chairs, letting its owners indulge in a slice of luxury while bringing some much-needed ergonomic improvements into the home office or gaming rooms. If we’re going to spend all this time by our desks, why not make the best of it?

A unit was provided for review.

Ade thinks there's nothing quite like a good game and a snug headcrab. He grew up with HIDEO KOJIMA's Metal Gear Solid, lives for RPGs, and is waiting for light guns to make their comeback.
Previous post Chapter Two of The Alchemist Code out on 21 Dec.
Next post World of Warcraft fans helped Make-A-Wish come true at local Winter Veil party