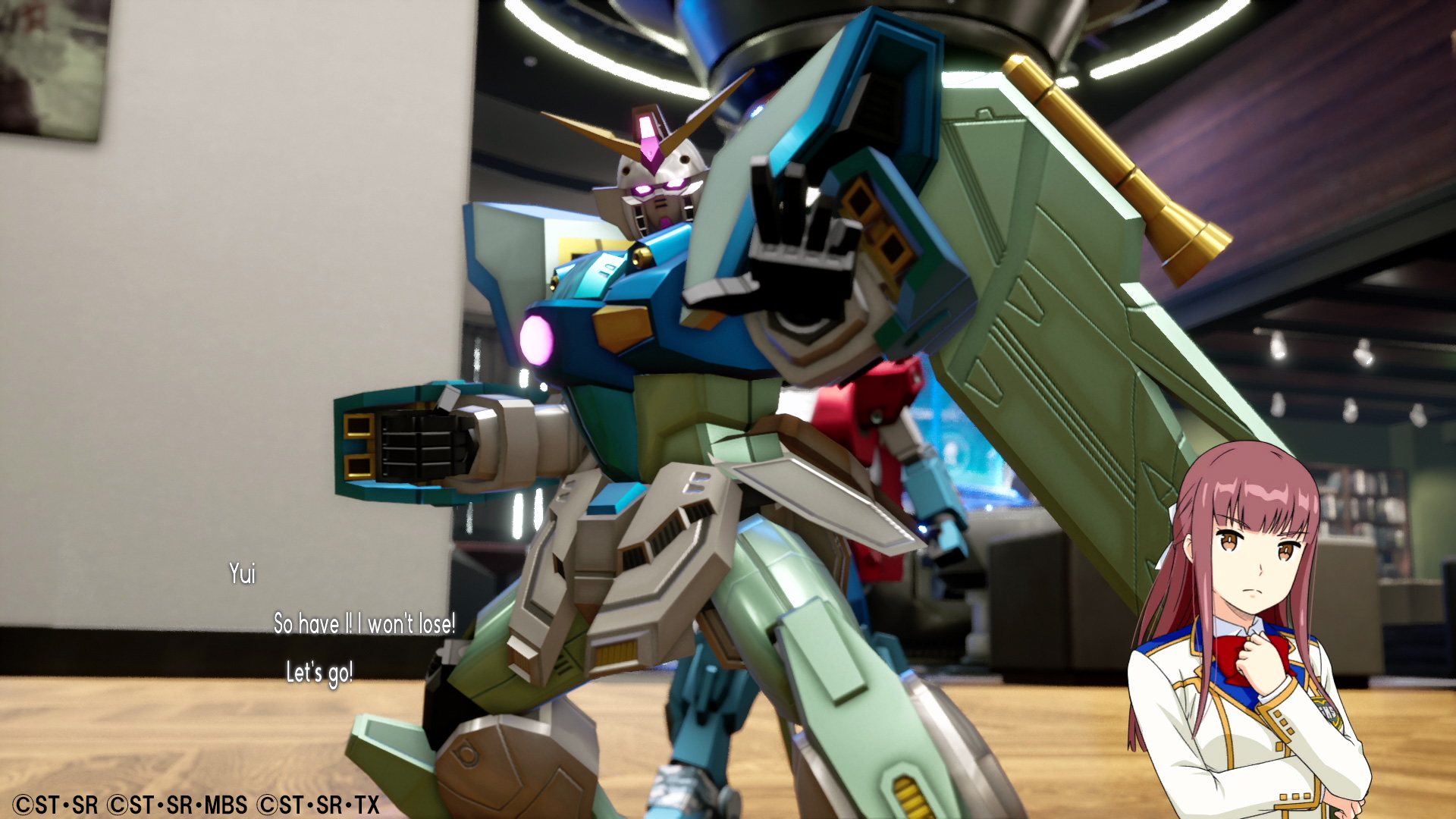 Right off the bat, there is a new campaign mode for those (like me) who felt that Gundam Breaker 3 needed a more cohesive plot. Set in Gunbre High School, where elite Gundam Build fighters enrol, the story revolves around Kyosuke and team’s efforts to stop to the notoriously corrupt student council.

The story is told like a visual novel, mainly to set-up the fight at the end of the chapter. These fights are arranged as a duo or 3-on-3, however New Gundam Breaker isn’t made up deathmatches. Rather, it’s a race to complete the mission while scoring the most points. Points are earned for completing sub-quests that randomly pop-up during the fight. One may involve killing a certain number of AI mechs, while some pits you against a special boss Gundam. The difficulty of the quest dictates how many points you’ll get, but the special Main Quests are necessary for completion.

To make things harder, the enemy team are also hunting for the same objectives you are. That makes it a hectic three-way with you, the enemy, and the quest mobs all fighting in the same space. It’s a radical departure from the stage-by-stage gameplay of the original Gundam Breaker games, and it’s much more fun for it. While the AI are pushovers in the beginning, they start putting up more of a fight as you progress further in the story.

While I love the quests system, some of the them can be rather unclear. The objectives aren’t highlighted on the HUD or the mini-map, so stumbling onto a target is sometimes a matter of luck than any actual planning. Speaking of which, the mini-map in horrendous. The icon depicting the player character is so nondescript that it pretty much blends in with the others during a busy battle, making an already hectic situation worse.

As before, parts and components may be broken off and salvaged for your own mech. You’ll need to actively go around scooping them up before depositing the loot in a Recovery box. I’m honestly divided on this.

It’s a great risk-reward system. Do you risk the mission by depositing your items, or do you keep on fighting knowing that you may not get to stow the acquired gear? Still, I often miss the old system where you get to keep everything that drops. There’s just something to be said about sorting through the massive piles of loot from a successful mission, rather than cherishing the handful of parts you managed to recover.

Luckily, you can also buy parts using the points you’ve earned from completing missions. These can be found in the Library mode, though Gundams must first be unlocked by encountering them in battle.

However, even with the three-way fights and the scramble for parts, the overall pace of combat now feels incredibly slow. You start off with the iconic RX-78-2 but it never feels as responsive as the earlier games, even after improving your parts and stats. Jumping and dodging in particular feels floaty, like you’re stuck underwater. There’s a lingering sense of awkwardness to the whole thing and it’s especially noticeable during melee combat.

There’s also an issue with the lock-on system against bigger targets like warships or Perfect Grade Gundams. Entering melee range will send the the camera panning upwards, making you lose sight of your own mech. This happens every time you face a huge boss or enemy, and it’s a major annoyance.

If there’s one upside to the battles, it’s that they do look satisfyingly nice and flashy. That’s in due part to the skills, which do a multitude of things such as direct part repairs to massively destructive attacks. Even the most mundane of skills look good, and while the quality isn’t as good as the anime it does leave a great visual impression.

Each part comes with its own special skill you can utilize in battle. It’s another plus to the game that there are tons of parts you can equip. They give your Gundam a totally unique look, which may be customized even further with paint jobs. Don’t forget to admire your hard work in the Gallery mode.

You can also customize the inner frame, which affects your base skills and what your Gundam specializes in. In short, if you want to go up close and personal then you’ll naturally want an inner frame that enhances melee skills. New Gundam Breaker definitely deserves credit for the amount of customization it offers, which in turn honors the entire Gundam-building premise of this particular universe.

Thankfully, the visual improvements apply to the stages too. No longer generic-looking stages, these battles now seem to take place within recreated locations in GunBre High School or from locales from the various series. My favorite has to be the teacher’s lounge, with its oversized monitors and furniture in the background. Sadly, you won’t be trashing the place as no environmental destruction is present. As a Gundam fan, it’s disappointing to see that New Gundam Breaker isn’t as good as it could be. The game nails the customization aspect of building a Gunpla, but it misses the boat bound for a fun, responsive combat system. With the game having such a strong focus on fighting, that feels like a massive misstep and a huge turn-off for fans expecting the fast-paced combat that the series was known for.

New Gundam Breaker is out now for PC and PlayStation 4.
Developed by Crafts & Meister. Published by Bandai Namco Entertainment.
A digital PS4 copy was provided for review. Sal's just your average hardcore gamer. He started gaming on the NES in the 80s and has been ever playing since. Sal doesn't care about which platforms games are on, only that he wants to play them all!
Previous post Netflix delivers big moments and surprises to Manila’s Asia Pop Comic Con
Next post Lenovo unleashes its Legion gaming brand with fresh new rigs