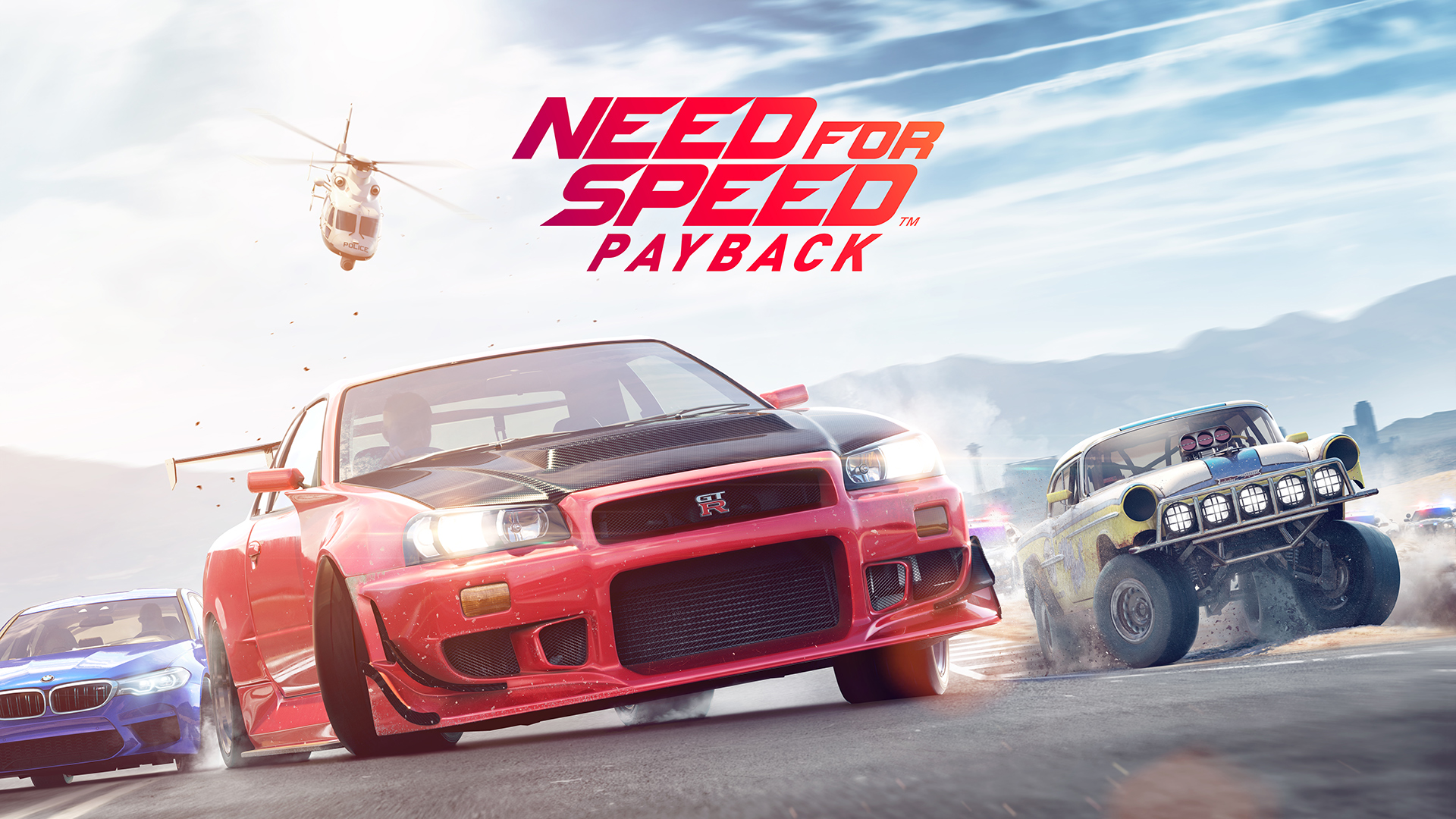 Born in the era of seminal arcade racers like Daytona USA and Ridge Racer, Need for Speed has successfully managed to stick around when all others have faded away. Like that friend in the background of every photo, the series seems to languish in its B-list status — never good enough to be top tier, yet good enough to warrant sequels. To nobody’s surprise, “good enough” pretty much describes Need for Speed Payback.

There’s nothing fundamentally wrong: the drifting is awesome, the cars are numerous, the visuals are good, and there’s a ton to do. However, in picking and choosing elements from other franchises, Need for Speed Payback starts to feel more like the Frankenstein of racers when it had the opportunity to be unique among recent releases.

Set in the Las Vegas-esque town of Fortune Valley, you’ll race across deserts, forests, and asphalt to chase after story missions and everything else in between. That story is front and foremost in the game, with even side missions tangentially connected to the main plot.

You can probably guess that revenge plays a major role. In short, you’re there to take down The House, the shadowy cartel that controls all of Fortune Valley, even the cops. After getting backstabbed by one of his own, street racer Tyler Morgan crawls out from the gutter to form a new crew, taking on all comers for his shot at payback.

This isn’t exactly War and Peace but, despite being a corny and hackneyed plot, the story eventually grew on me. It’s like watching a Fast and Furious movie — fast, loud, and incredibly stupid, but it scratches that itch for mindless entertainment. Plus, the campaign’s a novelty compared to all the other racing games and their career modes.

Pedal to the metal

Need for Speed Payback is arcade racing through and through, where over-the-top stunts and crashes are as much a part of the races as the cars are. Forget about racing lines, drafting, or the optimal speed to take a corner; here it’s all about speed, style, and aggression, with one finger on the accelerator nearly all the time. Managing nitrous and picking when to ram a rival is more important than anything else. Taking a leaf from Burnout, the crashes are glorified by slo-mo action shots of the wrecks you leave behind.

Yet no matter how aggressive you are, success is ultimately determined by your car levels. You upgrade your vehicles with Speed Cards, which can be acquired through events or the various in-game shops. These cards boost six different parts of your vehicle, from braking efficiency to turbo. Have a couple cards from the same manufacturer and you’ll even unlock set bonuses.

However, these also serve to hold you back artificially, with races and events all requiring higher and higher levels the further you progress. Skill takes an unfortunate backseat here, as no matter how great of a driver you are, you’ll never be able to beat the competition with an underpowered car.

While I wish there were more story missions, the meat of the game ultimately lies in all the side events. On top of the street races are speed traps, collectible icons, and other distractions peppered across the landscape. That talk about flashy driving isn’t just for show, either. There’s a risk-reward system that favors the fast and the furious, with police hot pursuits to truly up the stakes.

Sadly, most of the side missions are similar no matter where you go, making them all blend together after a while. What’s worse is the irony in having many of those events becoming trivial once you own souped-up cars; there’s a poor balance between driving challenge and race requirements.

Still, drifting is incredibly fun, especially in the wide, open areas of the game. In fact, some of the best entertainment to be had in Need for Speed Payback comes from all the drift challenges available. Trying to maintain the drift meter as you dodge traffic and walls can get Zen-like, requiring a state of focus and single-mindedness you’d never expect from a game like this.

Trouble under the hood

Driver AI is a tough nut to crack and in Need for Speed Payback, things swing drastically. One race it feels like you’re up against The Stig and, in the next, you’re sharing the road with a bunch of idiots. Cop AI isn’t much better; sure, they can keep up with you, but that’s mainly due to their constant respawning nearby rather than their driving ability.

Weirdly, for a game with “Speed” in its title, the cars don’t feel all that fast. The speedometer may show you zooming above 160KM/H but the car handles as if it were stationery. Even the requisite zoom-ins and copious use of motion blur once the N20 kicks in doesn’t seem to deliver the sense that you’re hurtling at breakneck speeds. Partly, that might be due to the poor frame rate, which often drops below 30FPS. After experiencing far smoother titles such as Forza and Driveclub, 30FPS racing, even on a PS4 Pro, just doesn’t cut it any more.

Visually, Need for Speed Payback looks pretty good. The varied environments provide a great backdrop and the open world certainly makes the overall gameplay feel connected, instead of a series of never-ending races. The cars are pretty but are still nowhere near the level of the models you’d see in a Forza or Gran Turismo entry. And considering how horrendous the crashes can be, the visual damage feels a little too sterile and dialed in.

The audio can be hit or miss, too. Although the cars sound good — you’ll definitely want to play with a pair of good headphones — the music and voice acting can be a mood killer. I’d say you’re better off using Spotify; racing while listening to Meatloaf’s “Bat Out of Hell” or Rammstein’s “Reise, Reise” elevates everything to a whole new level, which shows that the original soundtrack just wasn’t up to scratch in the first place.

What you’d expect from a modern Need for Speed

In a nutshell, Need for Speed Payback is good but not great, locking the franchise in its B-list status. There’s plenty to do, but being forced to kowtow to Speed Cards and car levels mean you’re forced to grind when it should simply hinge on skill, even if it’s an arcade racing game. May this be a reminder that poorly implemented progression systems can be devastating, especially for a genre that doesn’t even need one.

Need for Speed Payback is out now for PlayStation 4 (reviewed), Xbox One, and PC.
Developed by Ghost Games. Published by Electronic Arts.
A copy was provided for review.

Need for Speed Payback (PS4) was reviewed on the LG OLED C7 Television.

Sal's just your average hardcore gamer. He started gaming on the NES in the 80s and has been ever playing since. Sal doesn't care about which platforms games are on, only that he wants to play them all!
Previous post Nvidia introduces BFGD – a 4K 120Hz HDR display at a whopping 65 inches
Next post PS4 global sales hit 73.6M as of 31 Dec 2017