Home / Reviews / Movies / Ghost In The Shell: A step forward for Hollywood-Japanese adaptations

Ghost In The Shell: A step forward for Hollywood-Japanese adaptations 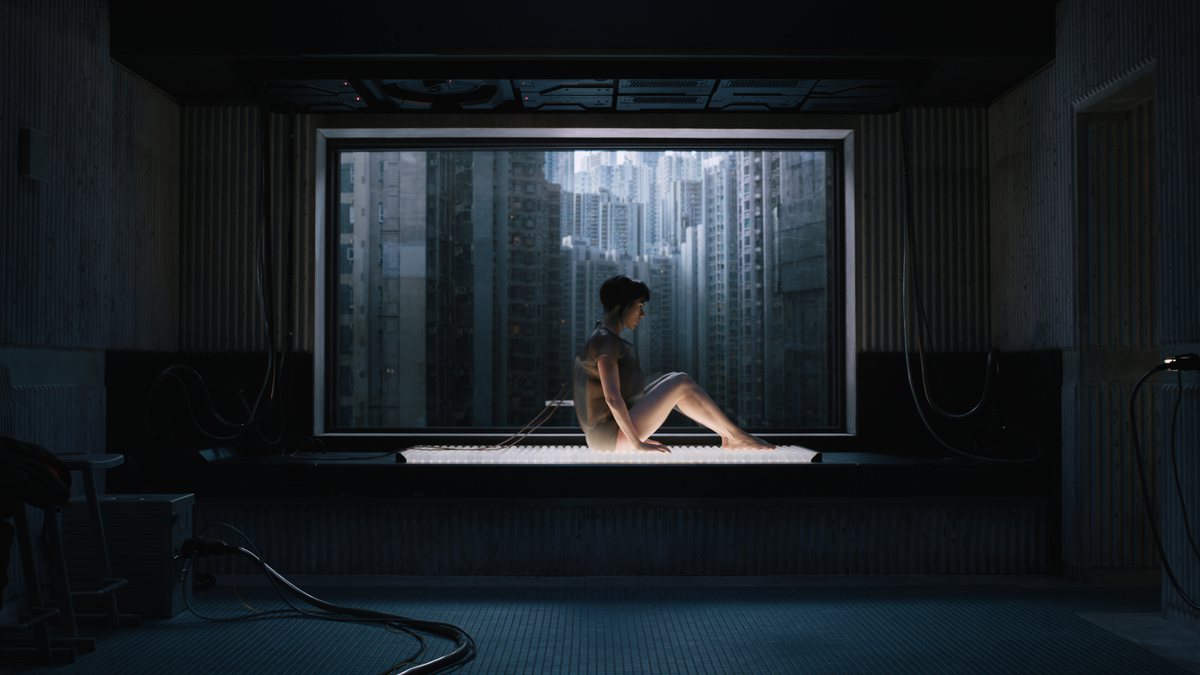 The first thing I do whenever a movie adapts another is to ask myself why. Was there something lacking in the original? Did it not age well? Is it going to make studios and license holders loads of money? Then I’m reminded of Martin Scorsese’s The Departed, a remake of the Hong Kong film Infernal Affairs. Both movies were spectacular, so why should this be any different?

While Rupert Sanders doesn’t soar to Scorcese’s directorial heights, it’s evident that a lot of passion went into Ghost in the Shell. It brings some of the best cyberpunk splendor we’ve seen on the big screen to date, the cityscape brimming with skyscrapers and holographic advertisements. The costume and set design is nothing short of phenomenal either, their decision to use practical effects via famed WETA Workshop telling in its quality. Yet where this live-action adaptation falls short is in the substance of its characters and story, making for an entertaining, if not shallow, copy of the source material.

To cover the basics, Ghost in the Shell is largely based on the similarly titled animated film by Mamoru Oshii (itself based on Masamune Shirow’s manga). It was a ground-breaking and influential release in 1995, presenting a thought-provoking narrative through a beautiful mix of hand-drawn and computer-generated animation, strung along by an evocative soundtrack from Kenji Kawai. Arguably, none of the movie and TV adaptations that followed could surpass it.

With that out of the way, let me tackle this from a movie-going perspective first. Is Ghost in the Shell entertaining? Hell yes.

Unlike the original, Sander’s version is decidedly an action flick than it is sci-fi. The opening hour kicks off on a strong note, the fight sequences and mystery surrounding our primary villain intermingled with Major’s (Scarlett Johansson) brief moments of introspection. She’s the first fully cybernetic human, a successful merger between human and machine, although things aren’t as rosy as they seem. Straddling the two worlds leaves her feeling different, alone, and just as she struggles to come to terms with her existence, suspicions behind her origins and past begin to emerge.

The Major is a tough act to live up to, a character that exudes toughness and severity but also an unnerving sense of detachment. With that being said, I have little complaints about Johansson’s acting. Her portrayal is a touch more human and hesitant at times – which I choose to see as a reminder of her “ghost” underneath the seemingly indestructible “shell” – though she manages to pull off the conflicted cyborg role rather well, expressing emotions mostly through her eyes. Her time as Black Widow in the Marvel movies paid off too, a point I was forcibly reminded of during a certain corridor scene.

Serving as Major’s confidante of sorts is Batou (Pilou Asbæk), her burly, white-haired colleague in the elite public security division, Section 9. He suits the role in terms of both looks and mannerisms, an anchor to Major’s mental turmoil; however, a couple of scenes do feel stilted in their delivery. Nothing worth recoiling over.

Everyone else has been stripped of depth.

Section leader Aramaki (“Beat” Takeshi Kitano) is relegated to merely admonishing Major for disobeying orders, his star power only shining through later in the film. Dr. Ouelet (Juliette Binoche), the lead behind Major’s cybernetic shell, follows a path so predictable it may as well have been a straight line. Main bad guy Kuze (Michael Pitt) improves matters somewhat but the way he explains and acts upon his motivations increasingly lean towards the cheesy as the movie marches on, making it hard to empathize with his desires.

Then there’s Cutter (Peter Ferdinando), CEO of Hanka Robotics, which just so happens to be the private company that made Major’s body. He’s your corporate villain – that much is plain as day – and while I appreciate the attempt to localize an antagonist to something more identifiable in the West, his character is painfully two-dimensional. By the final act I was wishing he’d disappear.

The setting, on the other hand, is gorgeous.

Ghost in the Shell is completely set within Japan, though that doesn’t mean the film is short on locales. The city itself presents two faces: at night it’s the spitting image of ‘80s cyberpunk, while in the day we’re treated to a Hong Kong-inspired aesthetic – cramped, cluttered, gritty, and a huge contradiction to the sharp, clean lines of the skyline after sunset. Away from the center, we get to visit the HDB-like estates and, further still, are lawless and burned out districts from an earlier war. The Major doesn’t exactly live in safe and peaceful times.

More impressive are its inhabitants, again reflecting the disparity in lifestyle the further we leave the city centre. One moment we’re looking at fairly disconcerting enhancements at play, such as fingers that segment into smaller mechanical tendrils for typing, and the next we have an Asian woman who might as well be your current neighbor. Small details, such as the way androids freeze and collapse to the ground, are also moments of geeky delight. And let’s not forget the thermo-optic camouflage, from the construction of the seamless, skin-like suit to the way it’s visually presented in action.

Even so, it’s a shadow of the original.

Most of the visually striking imagery you see are taken entirely from the animations, which includes the various media coming after the 1995 movie. So too are the key set pieces, and any creative reinterpretation was done to poor effect.

Cutter is a completely new construct and I’ve already touched on what a mistake he was. Major’s origins are different too, which not only diverges from the anime series but wasn’t even covered in Oshii’s movie. It has to do with themes, and while the live-action did endeavor to address the question of identity and life, it’s far too on-the-nose and conveniently wrapped up, complete with a feel-good hero monolog. I didn’t leave the theater pondering the definition of life, the ethics of A.I. and memory manipulation, or question the future of human evolution.

The thing is, that doesn’t bug me too much – again, this is an action flick, not a philosophical jaunt dressed in sci-fi. What does frustrate me is the way the supporting characters are handled. Aramaki isn’t the shrewd, political powerhouse that he is, keeping Major focused on the investigation. Togusa, the only non-augmented member of the team, isn’t given screen time to contrast with Major’s seeming lack of humanity. Even Kuze, our villain, doesn’t manage to present the Major with a more nuanced motive other than getting revenge, executing justice, and carving a place to call home.

The ending is the largest departure from the original, leaving me to wonder if they did so in hopes of producing a sequel. It’s not something I’d be opposed to, should they manage to string together a tighter plot.

This is the new bar adaptations should strive for.

Before long-time fans begin to gripe further, let me point out that this has been the best Western adaptation of an anime or manga that I’ve seen, while also being accessible. Mamoru Oshii’s films are undeniably tougher to sit through, demanding patience, focus, and repeat viewings – that just doesn’t sound enticing to studios and mass audiences.

This isn’t perfect – Sanders sticks too close to the original, forcing us to draw comparisons, rather than adapting key concepts for his own creative vision (after all, what’s the point of a live-action copy?). On the flip side, by playing it safe the characters and themes remain faithful for the most part, and we have to applaud the dedication to practical effects in an era of heavy CG.

As a fan, I’m also conscious of a critical point: that this Ghost in the Shell movie may serve as a gateway to the movies, TV series, and manga. If Berserk can do with a poorly received anime, then this live-action movie shouldn’t have too many problems at all.

Ade thinks there's nothing quite like a good game and a snug headcrab. He grew up with HIDEO KOJIMA's Metal Gear Solid, lives for RPGs, and is waiting for light guns to make their comeback.
Previous post Oppo R9s and R9s Plus Review: Working within the safe and familiar
Next post Destiny 2 releases on 8 Sep., includes PC version and timed PS4 exclusives