Review: Mortal Kombat 11 is an amazing fighter buried under a tedious grind 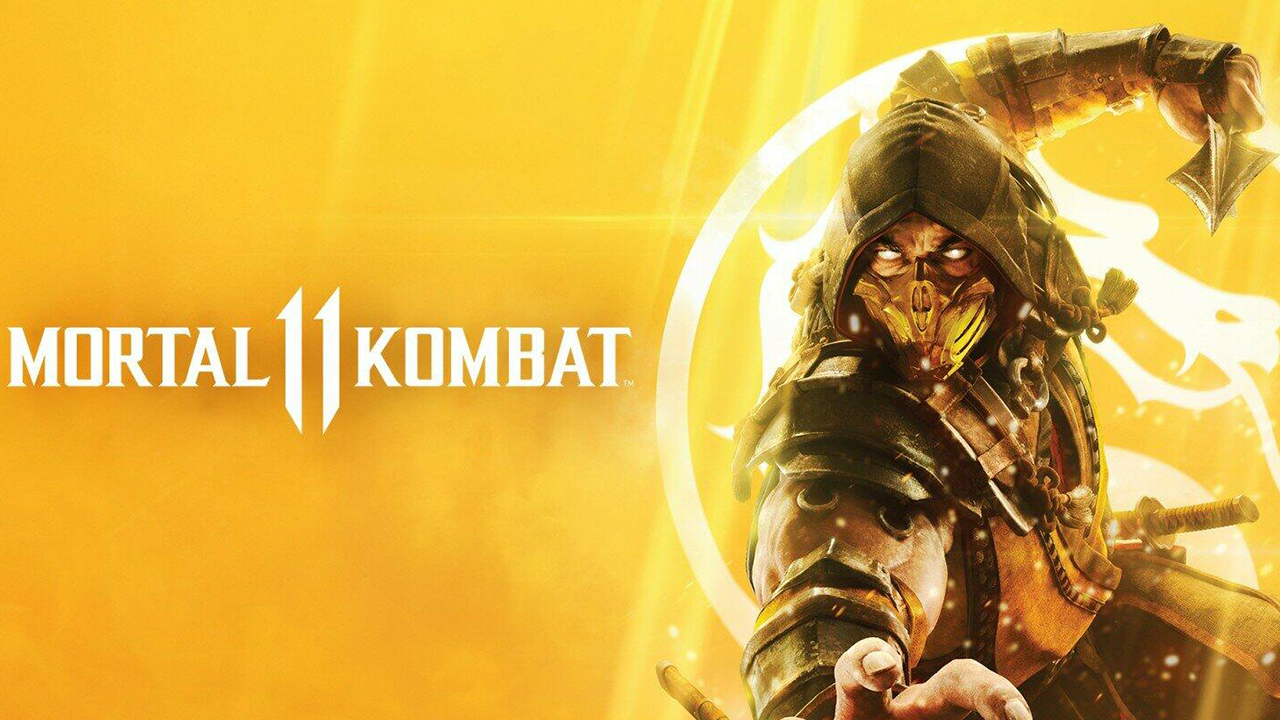 I never really got into the Mortal Kombat franchise. It’s not the violence, as I happily tore apart centaurs in God of War. It’s not that I dislike the series, either. I have a friend who’s really into the games, and I always can’t wait for him to play them. It’s just that I keep missing my seat on the hype train.

I finally got on board at the 11th station, and boy, I wish I’d been on it sooner. Mortal Kombat 11 is immense fun in anyone’s hands, whether they belong to longtime fans or newcomers alike. Combat is fast and fluid with a satisfyingly high skill ceiling, and the story mode is engaging with intensely high stakes. Unfortunately, the entire experience is marred by a bloated and unnecessarily grindy game economy that could hurt the game’s longevity.

Arenas in Mortal Kombat 11 are eye-catchingly detailed and vibrant, fitting the standard NetherRealm Studios have set with Injustice 2. The controls feel tight and deliberate but combat still feels a little janky. Combos and abilities can be awkward and difficult to pull off during battle, especially against human opponents. The important thing is to just focus on a handful of moves and get those right first; once you learn the basics, you’ll start to get the hang of everything else. 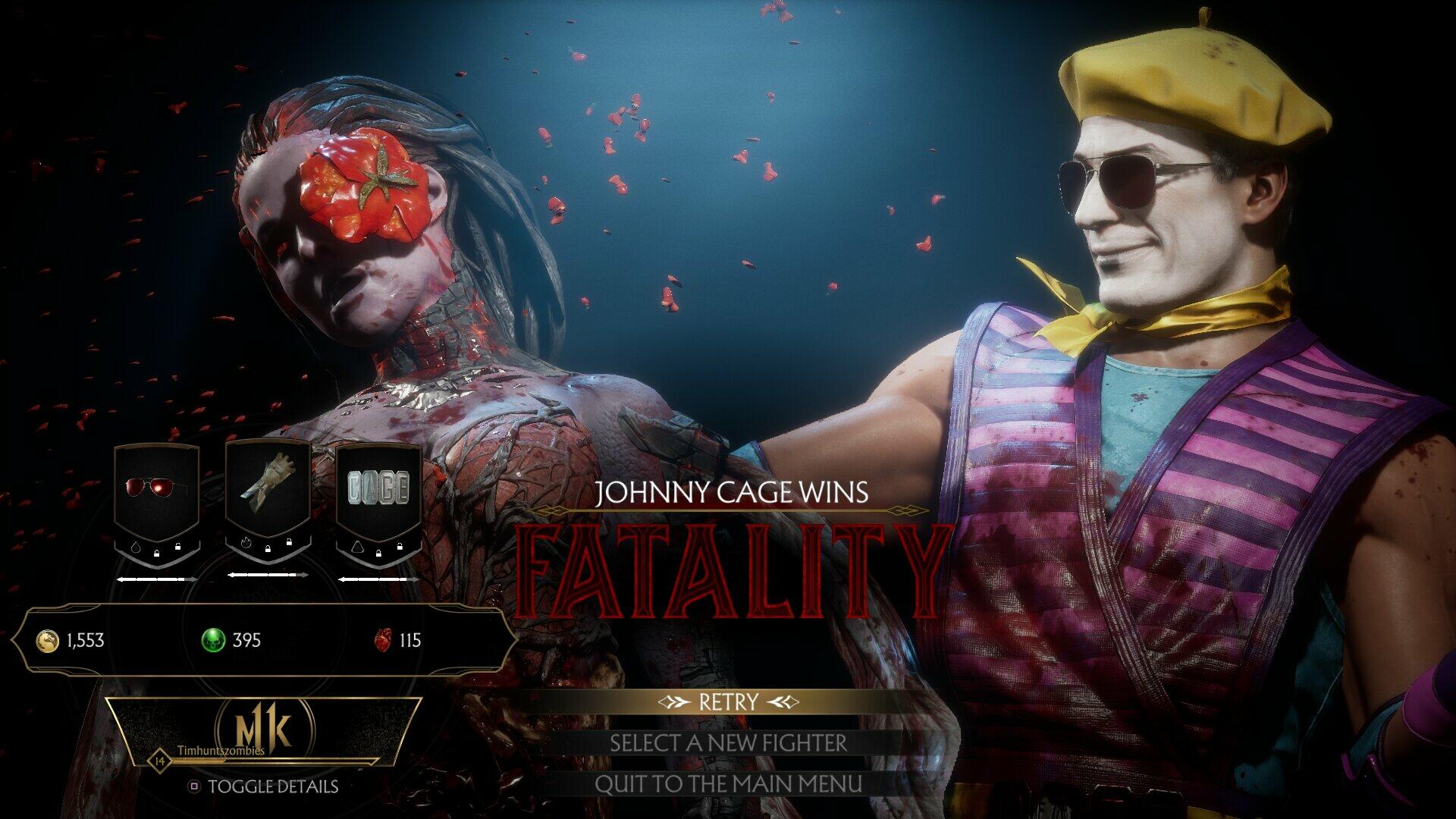 If this sounds daunting, never fear. A comprehensive tutorial mode goes through basics such as combo executions and abilities, to learning character-specific Fatalities (which are amazing) and other advanced techniques. I applaud NetherRealm for adding such a deep and extensive tutorial mode, probably the biggest I’ve played in a game yet.

Even character lessons are available, ensuring that players can pick up any character and master their fundamentals. Additionally, the game encourages players to complete these tutorials by rewarding them with some of the best character skins in the game. All in all, it’s worth taking the time to check the tutorials out — they’re fantastically done.

It didn’t take long for me to fall in love with Mortal Kombat 11’s roster of characters. How couldn’t you? It’s such a diverse, colourful group of Elder Gods, Shaolin monks, cowboys, movie stars and sentient insects. The sheer breadth of unique characters here means that literally anyone can pick up the game and find themselves loving at least a sizable handful of the cast. 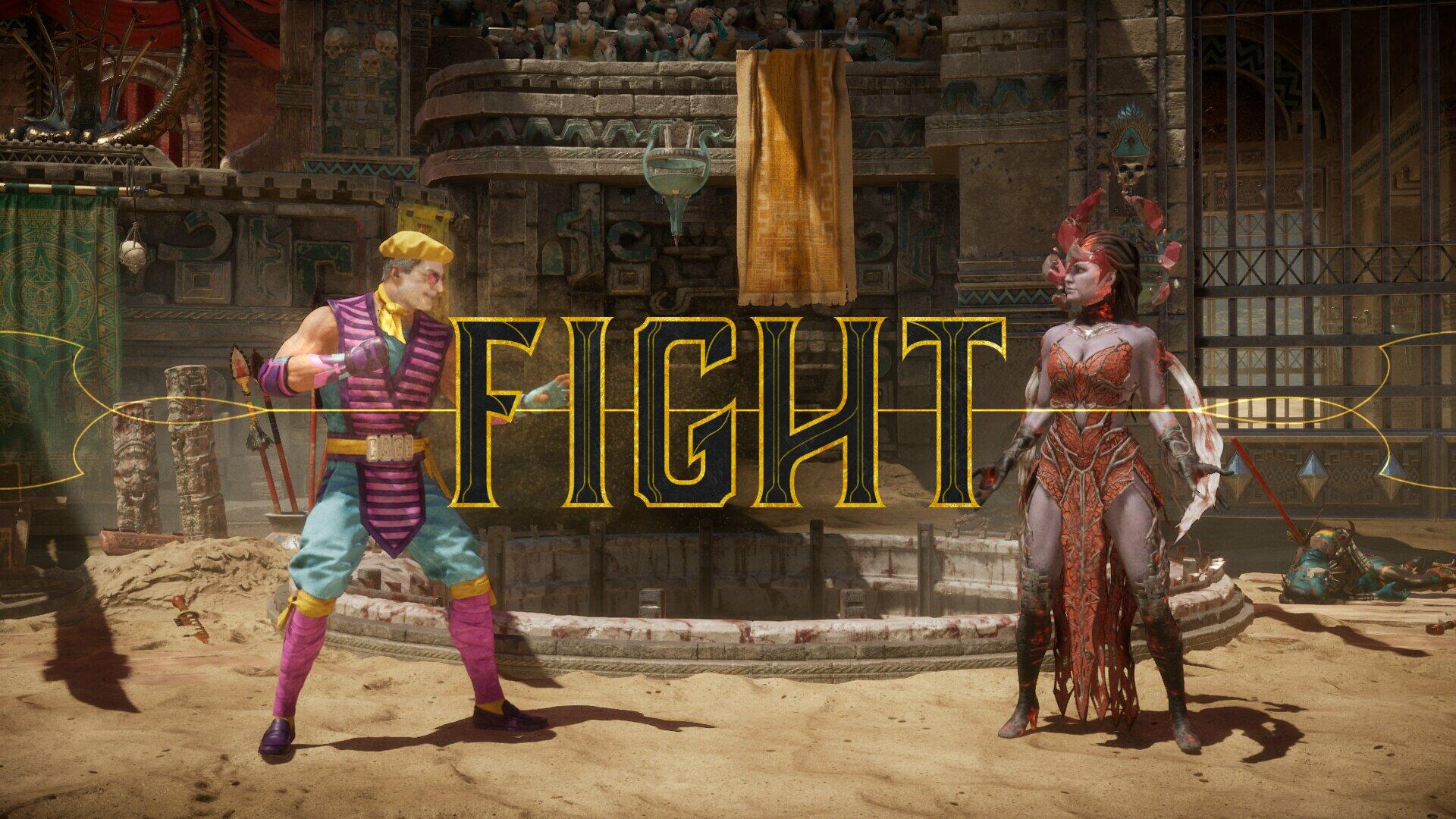 Johnny Cage snazzing it up.

Plus, they all have distinctive personalities and playstyles to dig into. If you’re like me, you’re going to find yourself falling in love with Johnny Cage almost instantly for his goofiness and general A-holery. Character designs help with that. Each character is so distinct from each other, but all are aesthetically pleasing to look at.

With these quirky characters come an almost overwhelming amount of customisation options. Every character comes with three costume pieces, and these can all be customised, from their guns to their belts à la Injustice 2. Character specific abilities can also be swapped out as the player sees fit, along with skins and intro/victory cinematics. NetherRealm have clearly put a lot of thought and polish into these cosmetics, because they’re all fantastic.

Keeping in mind that the only characters I recognised going into this game were Sub Zero and Scorpion, I was fairly sceptical about its story; I thought the world of Mortal Kombat had to be really silly to include such strange characters. Now that I’ve finished it, I can say with utmost certainty that Mortal Kombat 11’s story is really silly. It’s also so, so good. 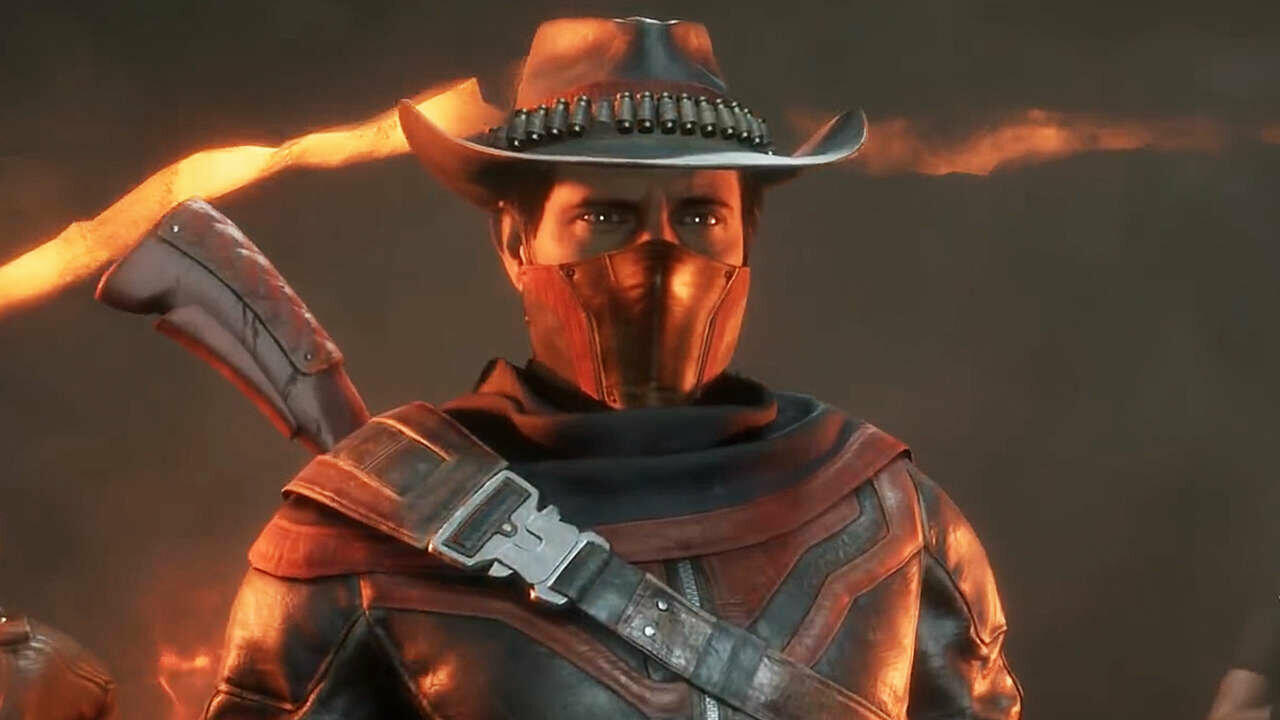 You know what time it is.

It revolves around the villainous Kronika, a new character to Mortal Kombat. She believes that all the Realms have collapsed into chaos, and so wants to rewrite all of time and history to preserve the balance between darkness and light. Predictably, her meddling with time doesn’t end well. Past and present timelines clash, bringing many of the main cast face-to-face with their past selves.

Having just gotten acquainted with these characters over the course of the story’s roughly 10-hour runtime, I can safely say that Mortal Kombat 11’s story mode is enthralling, pulling players into the rich, lore-filled worlds its characters inhabit with little effort. Don’t get me wrong, it certainly has its flaws. Weirdly directed cutscenes and editing issues stood out to me while playing, but it’s otherwise outstanding for a fighting game.

Almost every character gets their time in the spotlight; the only ones left out are the newcomers, strangely enough. The Kollektor, Geras and Cetrion have a lot to prove in such a wide roster of returning characters, but they’re not given a lot to work with.

The story is still fantastic despite this, with huge ramifications for the in-game universe going forward. That makes this an unmissable entry for older fans of the series, though I’m living proof that newcomers will enjoy it just the same.

The Kruel Towers of Time

Mortal Kombat 11 features Towers in two different modes. One is the classic version, wherein players fight waves of enemies in several basic Towers, some of which reward individual character endings. Set after the main story, these serve as a non-canonical final blow for the characters. 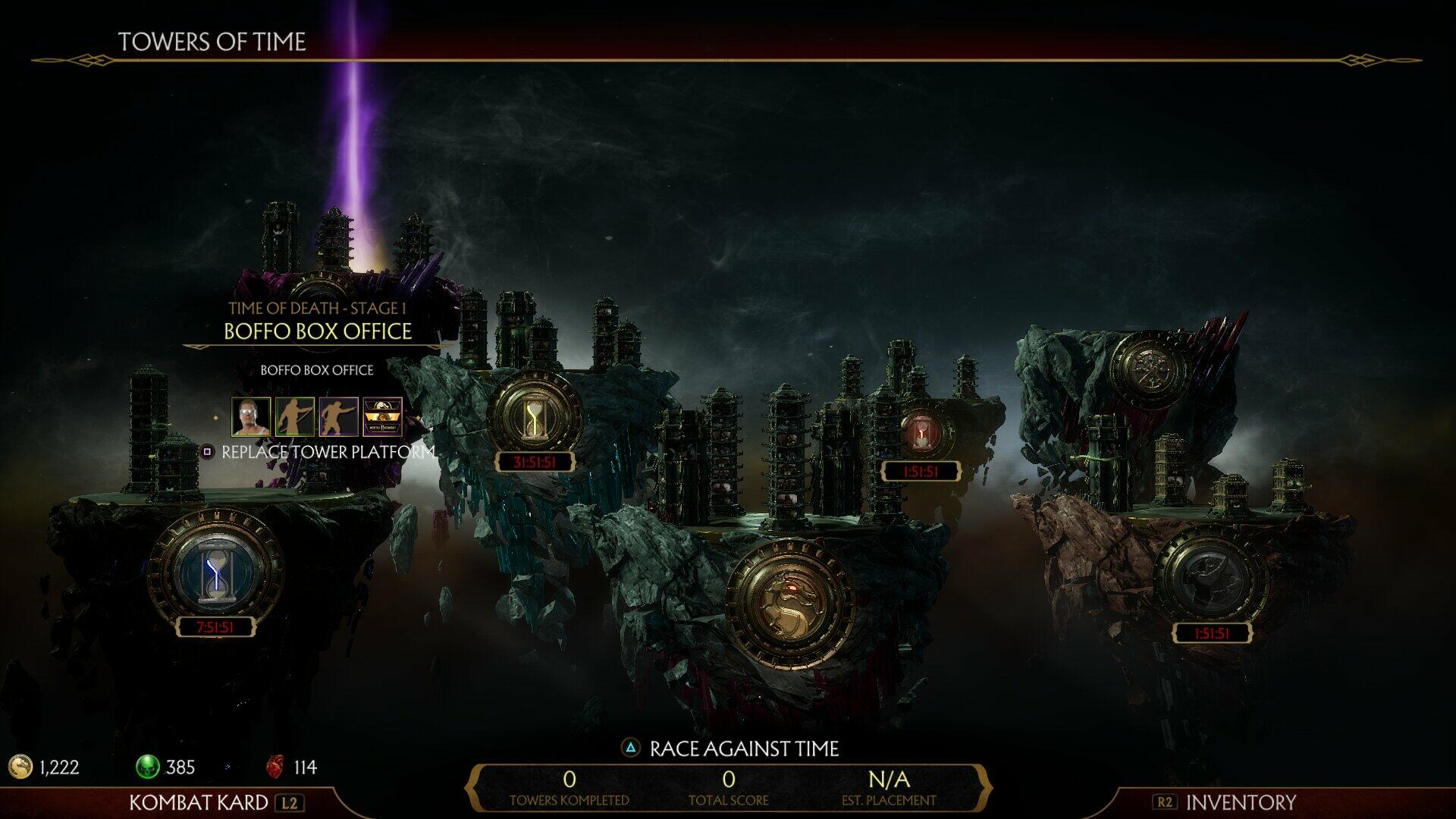 Towers of Time? More like Towers of GRIND. Oh come on, that was funny.

The other, newer mode is called Towers of Time, and it is truly a headache to play through at launch. It has four different kinds of Towers, and they’re the best source of currency in the game. Unfortunately, they also contain insane difficulty spikes modifiable only through certain consumable items.

Without these consumables, it can be impossible to progress. The fights are brutal, with boss fights, difficulty modifiers and stage hazards all working against you and in the opponent’s favour. Consumables are a necessity, but they’re always in limited supply and require grinding to obtain. I can’t fathom how the entire mode even made it through playtesting this way.

This becomes especially frustrating when it comes to Character Towers, as they are your best bet at unlocking corresponding gear and skins. In addition to their enormous difficulty, however, Character Towers cost 25,000 koins each to unlock! For comparison, an in-game battle usually awards me around 400 koins. and come in five difficult tiers. Once completed, it costs 50,000 koins for more tower tiers. 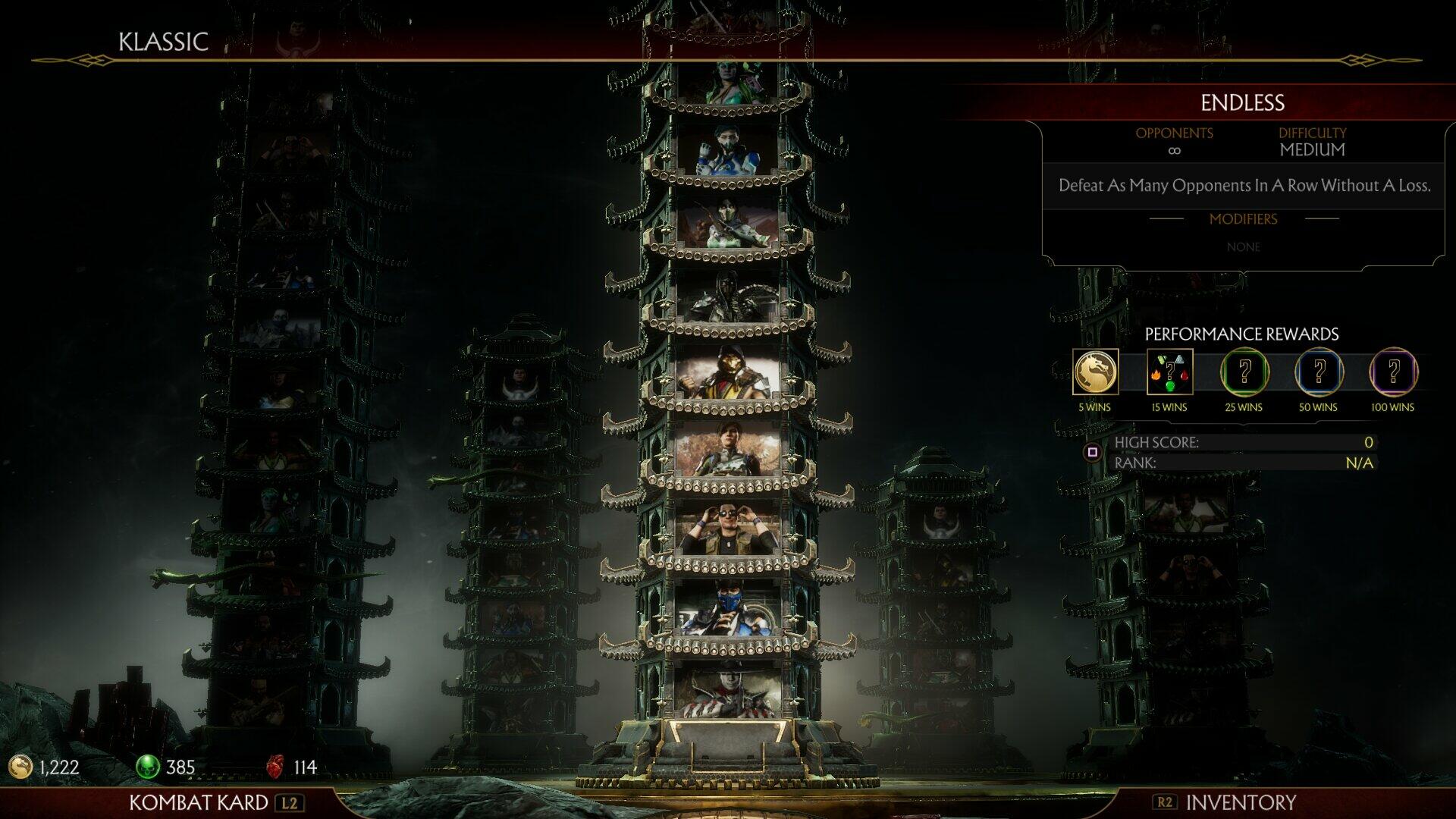 After every fight, the game has the nerve to remind you that you can use ‘skip fight’ tokens to bypass a particularly difficult battle. Personally, I think any game that encourages players to skip its own content is just fundamentally flawed. These Towers just aren’t worth the effort for now.

This Krypt mode is the biggest mixed bag for me thus far. It’s a returning semi-adventure mode from previous games, this time taking place on Shang Tsung’s island. From a third-person perspective, you control a visiting traveller, looting the island of its chests and secrets. Shang Tsung guides you throughout your journey as you pick up various key items and solve some small puzzles. 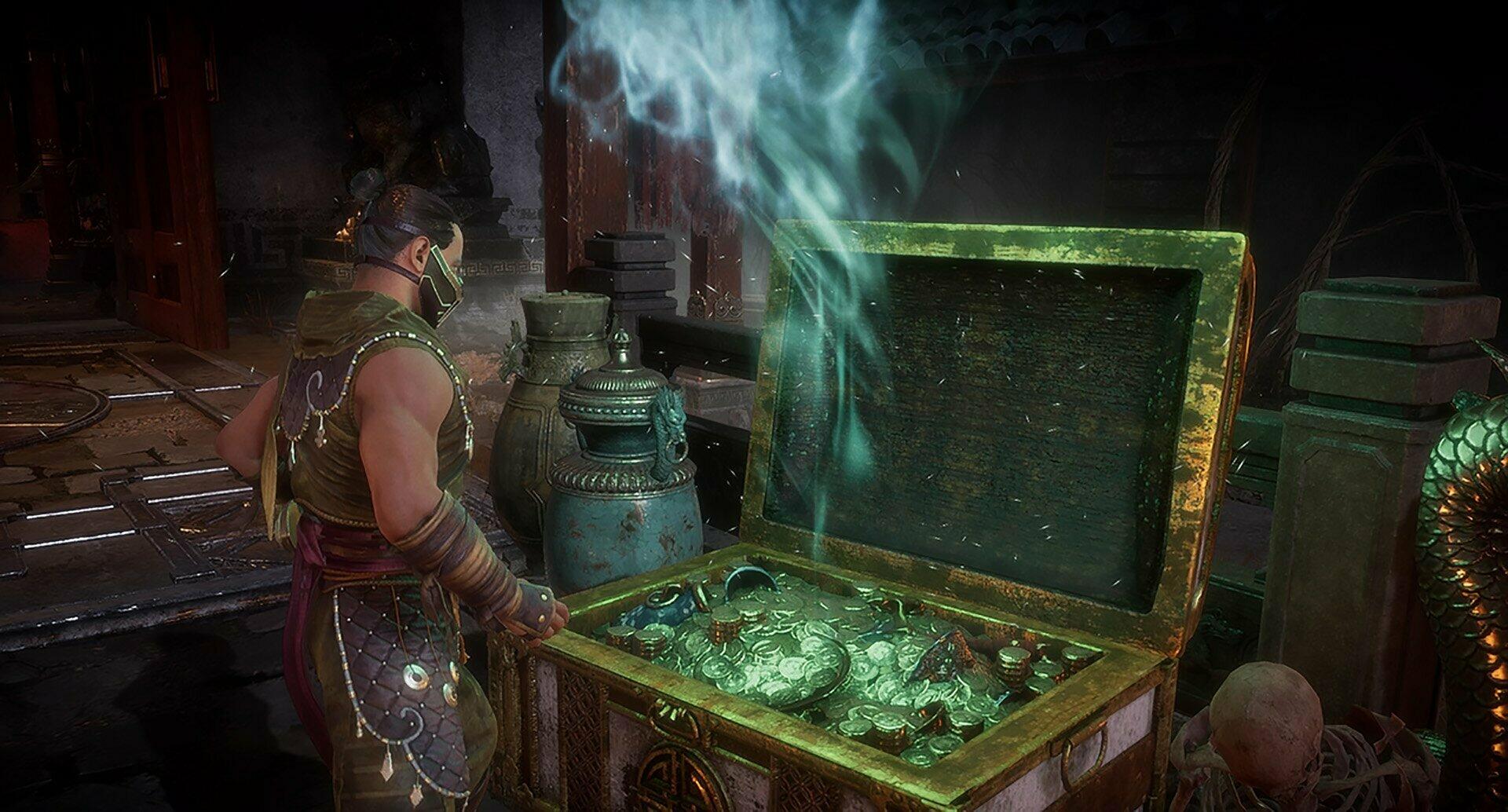 Right, I’m going to take one consumable and leave all this gold behind.

Overall, the innate concept of exploring the island is very well executed. Environments and textures look gorgeous, yet hang with a grim atmosphere dripping with dread. Shang Tsung was not exactly a role model in his time on the island, and so you will find many a tortured body hanging from tall poles as you explore – not counting the pools of blood and angry spirits. It’s a deep and interesting place, filled with lots of secrets and lore to uncover.

However, the larger purpose of exploring the Krypt is not to explore and solve puzzles. Those are all means to an end, that end being chests scattered around the island. That might sound like great piles of treasure, but it’s really where fun goes to die.

I’ll try to explain as succinctly as I can. All issues with grind stem from the ridiculous amount of currency types. There are about 7 in total. You have koins, soul fragments, time crystals, ‘skip fight’ tokens, easy fatality tokens, gear level up tokens and hearts. Each of these have their own specific uses, but they can all be found in the Krypt. 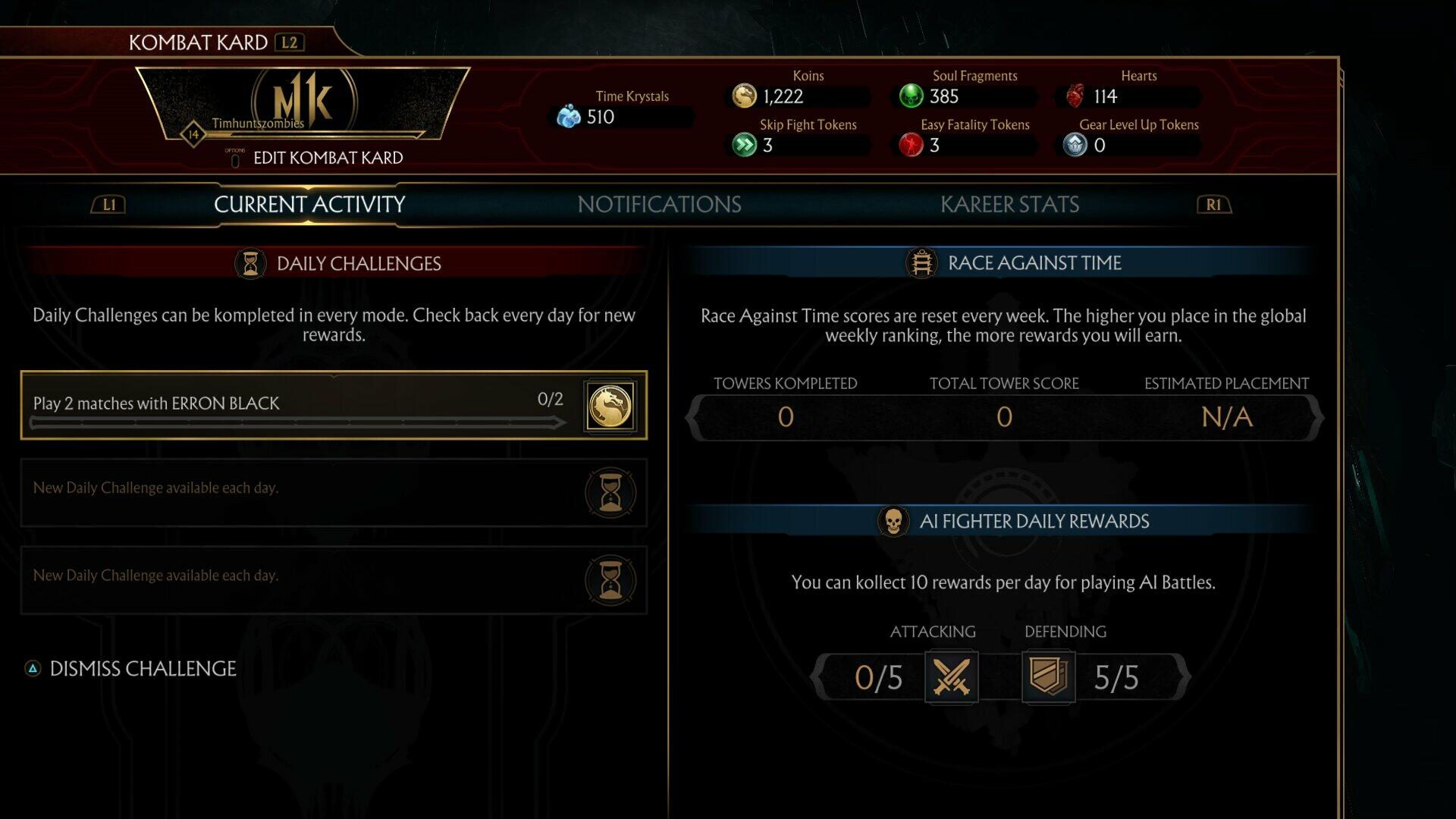 The ridikulous amount of currency types.

Unfortunately, that means that chests in the Krypt are heavily padded with an insane amount of items. These items include (but are certainly not limited to) currency, forge ingredients, character cosmetics, augments, concept art, music tracks, brutalities, fatalities and Krypt key items. If that already sounds exhausting then I have more bad news for you.

Chests can cost anywhere up to 18,000 koins to open, and there’s no telling what’s actually inside! Chests also contain around 1-4 items each. So, if I opened just 15 chests to get some brutalities for my favourite characters, that would set me back by around 225,000 koins.

I have opened more than 25 chests in my time with this game, and I still have not come remotely close to getting everything available in the Krypt, let alone the few brutalities and fatalities I want. There are an obscene number of chests, and it would take an obscene amount of koins to open them all.

You just must grind.

Mortal Kombat 11 is a truly fantastic fighting game at its core. It has enormously complex and fun gameplay, mixed with a great story mode and customisation system, that easily make this a game worth checking out. However, all of this is hampered by its awfully bloated and grindy economy, demanding too much of the player and rewarding them with so little. 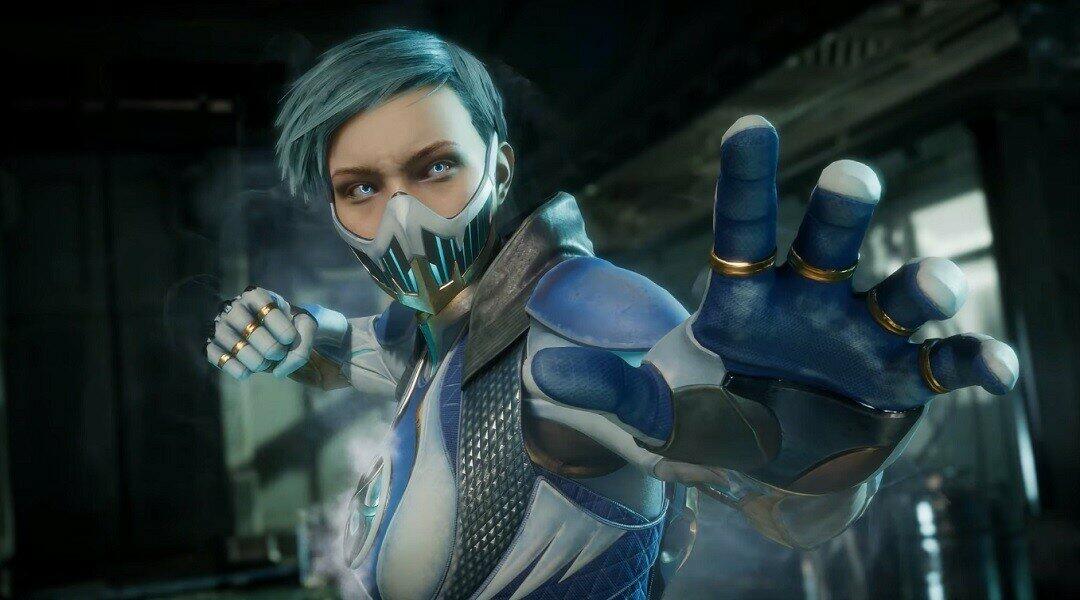 Almost great, if not for needless grinding.

NetherRealm has promised a patch that will tweak some of these issues and give players free currency for their woes, but I fear the game’s economic problems run too deep to be fixed in just one patch. Players who are only interested in the story and combat modes need not worry, as these grinding issues won’t really affect them. Players who want to experience everything the game has to offer, however, will be severely disappointed. I’d recommend waiting a month or two to see what happens.

Mortal Kombat 11 is out now for PC, PlayStation 4, Xbox One, and Nintendo Switch.
Developed by NetherRealm Studios. Published by Warner Bros. Interactive Entertainment.
A copy was provided for review.