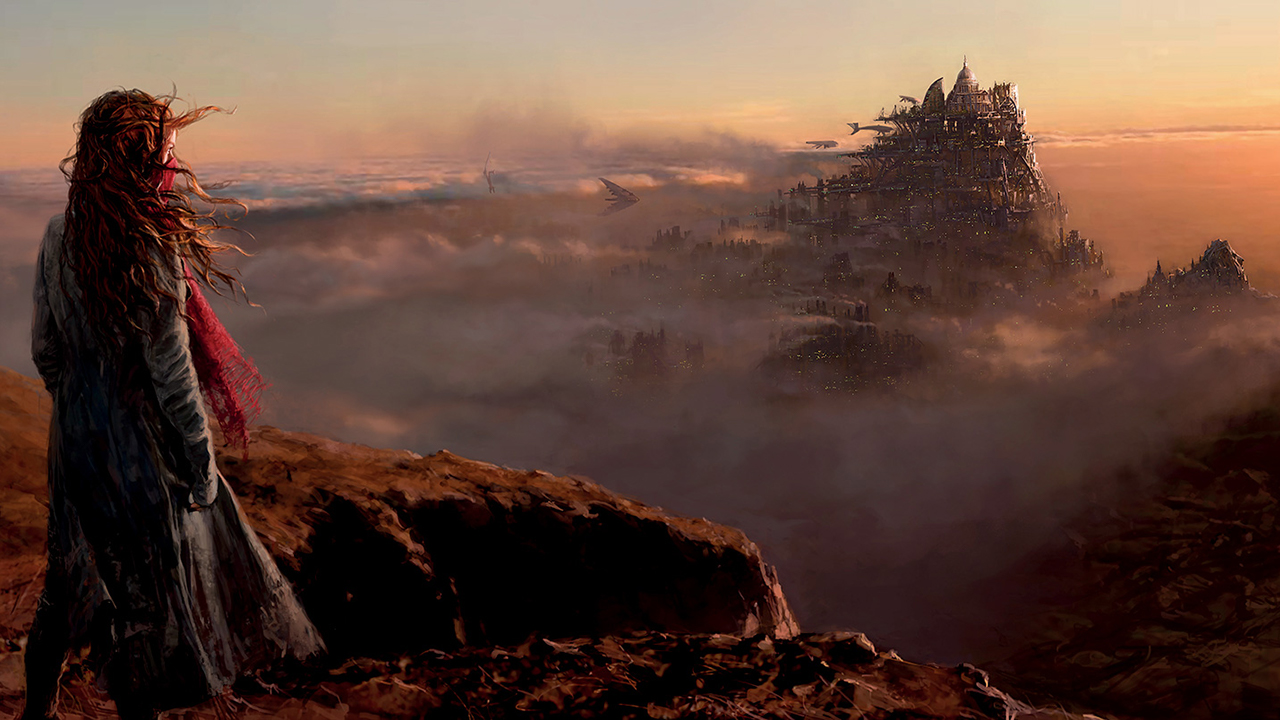 Like Hugo Weaving’s Thaddeus Valentine, a manic rush to the finish sees Mortal Engines sputtering and spewing long before it has the chance to shine.

Adapted from Philip Reeve’s similarly-titled novel, Peter Jackson’s 128-minute adventure lays plenty of gorgeous hooks to reel viewers in, especially the geeky among us. Ravaged after a Sixty Minute War, earth has now turned into a post-apocalyptic wasteland churned by the gigantic tracks of cities. Chief among them is London, a massive English tank-diorama topped by St. Paul’s Cathedral.

And how does such a massive, populated monument sustain itself? Why, by consuming others, of course. In this city-eat-city world, London chews up static settlements and lesser traction cities to harvest energy and resources, cutting and dismantling with large razor discs and thrumming cranes. And in this dark age of technology, historians plunder through the wreckage to find treasures lost to war and time. Like, say, a toaster.

It’s ridiculous, it’s excessive, and it’s oh so gratifying; in almost the same way that Warhammer 40,000 embraces its own silly lore (fans should be able to spot a few fun comparisons). Yet for all of its wonderful set and costume design, for all of its visual magic and artistry, this sci-fi turned steampunk universe is ultimately let down by a story that simply fails to enthrall.

The stars of our show are Tom Natsworthy (Robert Sheehan) and Hester Shaw (Hera Hilmar), a duo forced together by circumstance. Cinema’s crush for strong leading ladies continues here and, for a moment, that holds true. Hestar’s brooding persona is ultimately softened by the amiable and chatty Tom, a fresh-faced Londoner now out of his element, and before long the two share the common goal of stopping Thaddeus.

They’re joined by an eclectic cast of (throwaway) side characters, but for all their acting chops and cool style they just aren’t memorable. Moments calling for empathy are handled with all the grace and finesse of a bulldozer, coming across forced and contrived. Villains are eventually beaten down into straight up movie tropes, making decisions that seem counter to how they were initially portrayed. In fact, most of the major plot points were by and large predictable to anyone paying attention.

Perhaps we’re meant to just sit and enjoy the ride, seeing how this is a movie about giant cities on wheels. Here’s a huge metaphor for industrial imperial powers seeking to exploit the untouched lands of the east. Here’s a lumbering machine of death, the last of his kind, keen on redefining life. And here’s a man kicking off a loose railing minutes after running around a facility with a bleeding stab wound.

Perhaps it’s meant to be entertaining in it’s own, schlocky way, but by the time the credits rolled it all felt rather safe, sterile and, dare I say it, bland. Imagine that. I have the gnawing feeling that the movie was rushed to tell a complete story, rather than risk building a trilogy that might fail at the box office. I suspect fellow newcomers would enjoy the novels far better, for the real head-turner here was Reeve’s universe itself. And I’m confident that viewers would file out the theater trying to recount all the blatant Star Wars references.

Mortal Engines should be treated as the bit of entertainment that it is — enjoyed in the moment, discussed in the space after, and left to be forgotten. This isn’t going to engage you in the way that Bad Times at the El Royale did, nor will it evoke all-ages laughs like Ralph Breaks The Internet, but for two hours at the theater it sure didn’t hurt. Best bring a friend.

Ade thinks there's nothing quite like a good game and a snug headcrab. He grew up with HIDEO KOJIMA's Metal Gear Solid, lives for RPGs, and is waiting for light guns to make their comeback.
Previous post GAX Shootout: Huawei Nova 3i vs Honor Play
Next post The Game Awards 2018: God of War seizes Game of the Year, Red Dead Redemption 2 wins four awards