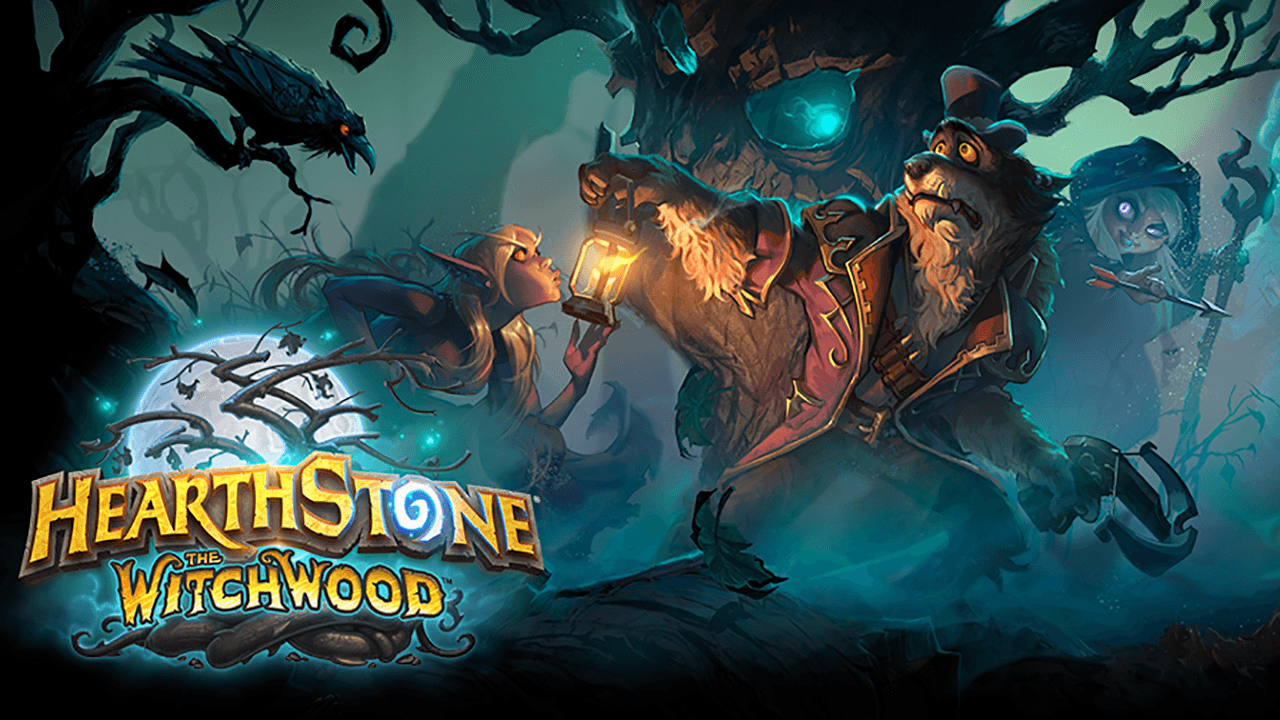 I pumped my fist in the air when I finally defeated Hagatha the Witch. I succeeded on my 10th attempt – but I had earlier spent another 100 hours just to unlock this final boss battle.

The new single-player Monster Hunt mode is my highlight for The Witchwood, the eighth expansion to Blizzard Entertainment’s CCG Hearthstone. Monster Hunt required me to play as one of four heroes – Tess Greymane the Tracker, Darius Crowley the Cannoneer, Houndmaster Shaw, and Toki the Time-Tinker –  each with his or her own pre-built deck and unique hero powers. Tess, for instance, is a rogue/hunter hybrid whose power is to discover all spells that have been cast in battle. Monster Hunt is an eight-part “dungeon run” against increasingly challenging mini-bosses. You start with 10 pre-selected cards, and winning a round earns you a bucket of three extra cards. Sometimes, you will also gain additional passive powers and special cards, depending on which round it is. Winning always offers you three random-choice rewards but lose once and you restart the mode from scratch.

Victory is not easy. To unlock the fight against Hagatha, you need to win at least four dungeon runs, each with a different hero. Hagatha is tough too, with crazy spells such as ‘Amalgamate’ (“Destroy all minions. Summon an Amalgamation with the combined Attack and Health.”) at her disposal. It doesn’t help that she earns a free spell every time she summons a minion. It seems impossible with the odds stacked so heavily against you, were it not for a mega challenge where you call upon the powers of all four heroes.

Defeating Hagatha was pure ecstasy, but that almost immediately turned to despair once I discovered that my month-long, Herculean finger-swiping labours were rewarded with just one cosmetic card back. No legendary cards, no gold nor crystals, no free decks, not even one bloody common card. Just bragging rights. Blizzard deserves full kudos for creating the best PvE experience in their four-year-old game, but it does seem that one of my favourite game publishers of all time is making it harder for free-to-play players to succeed in competitive PvP. Previously, we could pay to unlock PvE Adventures such as Curse of Naxxramas and One Night in Karazhan. Completing these adventures would unlock a set of powerful cards, which the player could then use for PvP fights.

With the developer planning to launch three expansions in a year, it just seems hard for F2P players to catch up. There are daily quests to help us earn virtual gold to buy card packs, but it takes plenty of time and luck to get the cards you need. Before you can even complete an expansion the next one launches, bringing another 130-145 cards to unlock.

To make things worse, there are now two modes of play. Standard mode – used in official competitions – only accepts cards that have been released over the last two years, making a lot of the older cards (many of which I have spent time and money to acquire) worthless. You can “dust” them for crafting crystals, but you only get 1/4 of the card’s original value. There’s Wild mode which has no restrictions, but there are just too many available cards to make it meaningful.

With the Witchwood expansion, several new card mechanics have been introduced. A minion with the ‘Rush’ trait can attack on its first turn, just like ‘Charge’, except Rush minions can only do so against other minions. The ‘Echo’ spell lets you recast the same card multiple times on the same turn, so long as you have enough mana. So when you have the full 10 mana, you can summon five 2-mana Hunting Mastiffs (which has Echo and Rush) with just one card, overwhelming your enemy with an army of dogs. 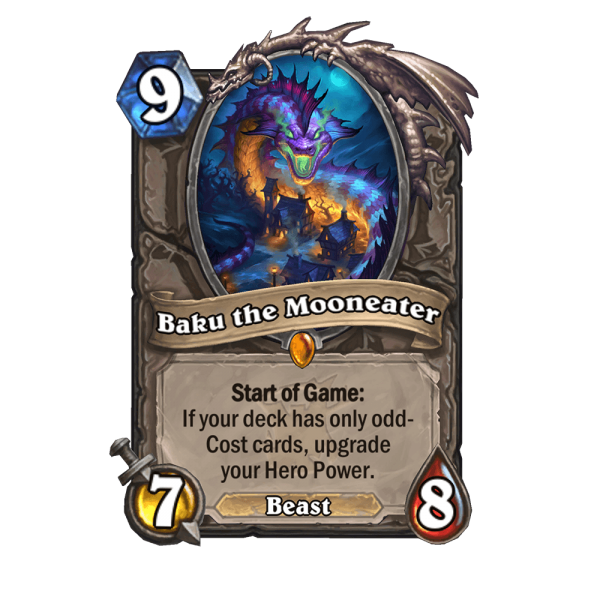 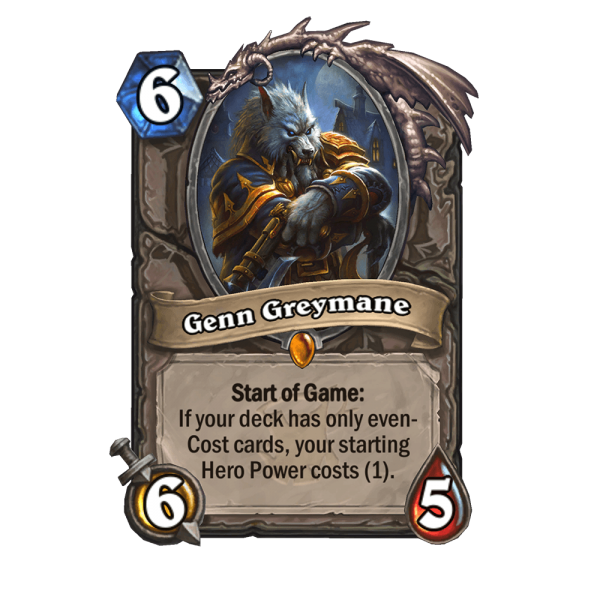 The two new legendary cards offer players a whole new dimension to play with. Baku the Mooneater upgrades your hero power at the start of the game, but only if you have odd-cost cards in your starting deck. This means that you have less cards to choose from, but a rogue with a 2/2 weapon or a warrior adding 4 armour per turn is a huge advantage that is hard to resist. I was lucky to get Baku early, so I could play around with a lot of these new combinations. Doubling the hero’s power is not a new mechanic, but you previously needed a specific minion called Justicar Trueheart (which I used generously with my old Control Warrior deck), one that is typically only summoned in the mid-game.

Another minion with the ‘Start with Game’ mechanic is Genn Greymane. He halves the cost of your hero power to 1 mana, but only if you have even-cost cards in your deck. A lot of new decks have been formed using either of these cards. An “odd Warrior” with Baku would be focused on building up Armour for defence and then taking out enemies with ‘Shield Slam’ and ‘Reckless Flurry’, spells that deal your Armour value as damage. On the other hand, an “even Warrior” would be more aggressive, making use of the 2-mana Execute spell to remove powerful Charge minions like Kokron Elite and Grommash Hellscream to mop up the enemy hero. I have been a fan of Hearthstone since the game launched, which means I have continually debated over whether I should spend real moolah on a bunch of card packs to “start” a new expansion. This time round I decided that I won’t pay anymore (and instead decide to get a bundle of free packs in exchange for writing this review).

The Witchwood expansion offers a top-notch PvE campaign with an average set of new cards and PvP strategies. However, I am also finding it harder and harder to stay competitive without spending money or exhausting all of my free time.

Hearthstone is out now for PC (Windows, MacOS), Android, and iOS.
Developed and published by Blizzard Entertainment.
A code for Hearthstone: The Witchwood card packs was provided for review.

We are Team GameAxis. And we will play games for food.
Previous post NVIDIA and ASUS are running a PUBG-themed promotion till July 2018
Next post The Alchemist Code gets Final Fantasy XV stars in next event