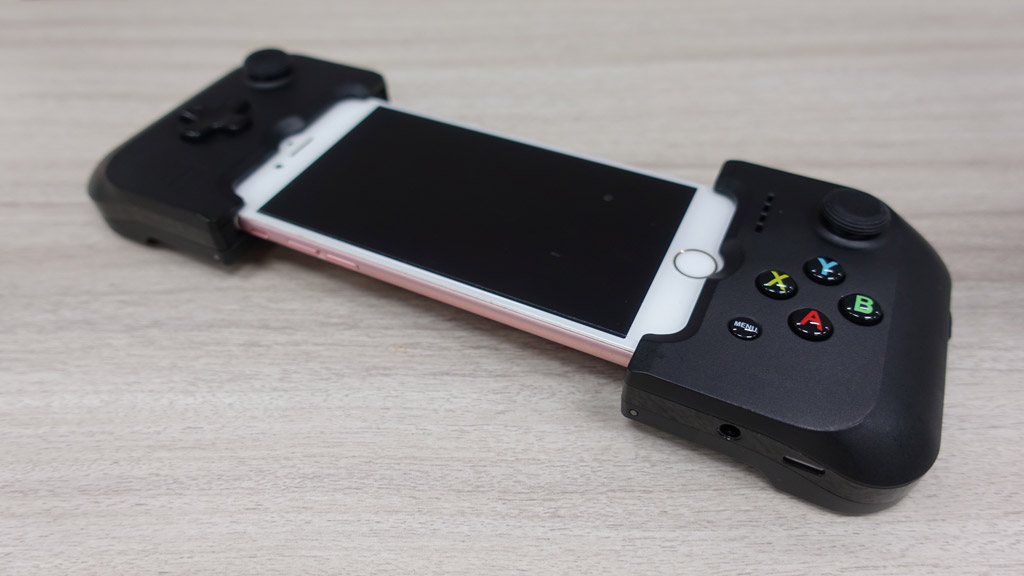 Ever wanted to have more accurate controls over your games in your iPhone? The Gamevice accessory might just be your answer.

Setting up the Gamevice with your iPhone is simple. With my iPhone X, I had to remove the phone out of its protective case to plug it into the Gamevice’s Lightning port. A slider tightens the back of the controller to keep everything fairly snug. It also supports Plus-size iPhones, and in fact looks better with those phones. But iPhone owners with thick glass-type screen protectors may not be able to fit their phones into the Gamevice – a potential deal breaker.

I was hoping for the Gamevice to act as a power bank for my iPhone as well, but it doesn’t. In fact, it draws power from your iPhone, reportedly at about the same rate as a pair of headphones. By excluding a built-in battery unit however, the controller is very light and could slip into a small bag unnoticed. The Gamevice smartly folds up when not in use.

You do, however, get a pass-through Lightning port, for when your iPhone is low on power juice, and surprise surprise, a standard headphone port. The Lightning port is even smartly positioned at the bottom of the Gamevice controller – ensuring you’ll never be encumbered by the cable during intense battles. But oddly, the left side of the controller flexes a fair but and doesn’t hold the top end of the iPhone as securely. The two halves of the unit also snaps together magnetically when unused, making it nice and compact for traveling.

Playing it with PUBG and Mobile Legends

In use, the Gamevice controller works as it should. The triggers are solid and have a good travel, the analogue sticks work very well but the D-pad leaves a little much to be desired – it gets unresponsive at times, as with the four XYAB buttons, and has caused a few griefs for me in the few PUBG and Mobile Legends matches I’ve played on. A word of fair warning; avoid ranked matches in Mobile Legends.

A fastener ensures any iPhone 7, 8 or X or even Plus-type can fit into the Gamevice.

The way the controller is designed also meant that it is only suitable for land-scape format games – no luck for games like Mario Run. The iPhone version also has a price-tag of $109, and while I personally do not consider that as a deal breaker, some of you might (in context, a standard PS4 or Xbox One controller cost anywhere between S$70-$80). More importantly, there’s also the question of how the form factor of future iPhones can wreck the controller compatibility with it. For instance, slimmer iPhones are bound to feel flimsy when attached to it since it won’t fit snugly onto both ends of the Gamevice.

The Gamevice is a well-designed controller that turns an iPhone into a Switch-like handheld console. Despite the flaws mentioned above, I do give it a guarded recommendation for iPhone gamers who are looking for physical controls. For better or worse, it is the only good controller accessory for the iPhone out there.

Aaron Yip is an industry veteran with more than 15 years of experience. When not spending time on his gaming PC and consoles, he can be found in Hyrule solving ungodly puzzles and collecting gems.
Previous post Watch Blizzard’s latest Battle for Azeroth “Old Soldier” cinematic
Next post Expect Steam’s Flash Sales to make a comeback