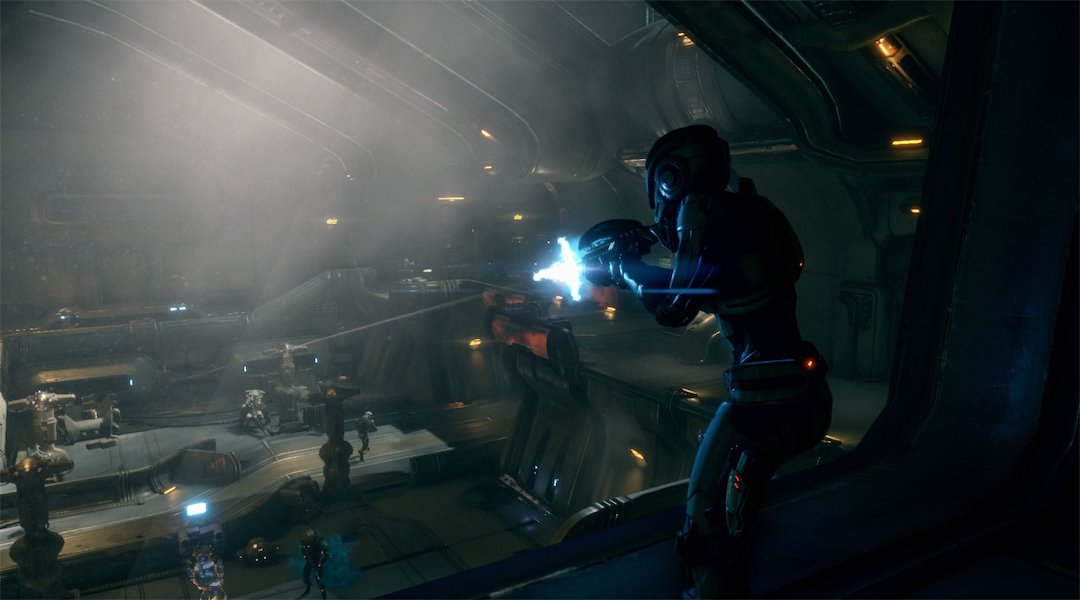 By now, most of you reading this will probably know that Mass Effect Andromeda’s single player is fun but very, very flawed. That’s sad, but very true. What’s sadder though is that the multiplayer is worse.

Let’s get to good parts first. It’s no longer a dependent on your single-player game, like in Mass Effect 3. It’s also chock full of distinctive character classes and exotic weapons, all of which are unlocked by opening card packs. If you’re into that sort of thing (like most of us are), the cycle of playing matches for credits to get enough to buy one of the more expensive packs is enough to last for a while.

In fact, multiplayer is incredibly like single-player. Except you’re not given free rein to customize your skills. Instead, skills are dependent on what characters you use. Some are Biotic specialists, some are hardier than others…that sort of thing. There are even rare characters that pack the more powerful skills into one handy package.

On top of that, playing as different characters will net you XP that accumulates in a shared pool. Depending on what character you use, you get different XP types, all of which unlock different bonus stats like extra health or faster recharge speeds that are applied to all your characters once unlocked. Yet another incentive to keep you playing for a long, long time.

When it works, multiplayer in Andromeda is a blast. Multiplayer is purely co-op, with you and three other players going up against hordes of enemies. They’re either the Remnant, the Kett or the Outlaws and each faction has different strategies and units you need to account for.

Since Andromeda doesn’t have a dedicated server, finding a playable game with low lag can be a problem, especially if you don’t have friends to play with. For the first few days after launch, I was thrown into games after games with horrible lag.

It got so bad that enemies on my screen would show their health bars to be empty, but would still come after and shoot at me. When the connection is bad, the game is completely unplayable. However, when you do manage to get into a good game, the multiplayer is as fun as it gets, even teaming up with random strangers.

On top of the allure of getting better gear, Andromeda’s multiplayer also has challenges you can complete for rewards. They usually reward with credits, cosmetic items and some even give you free booster packs. There are a lot of them to complete, though most of them will require a significant time investment to do so.

The maps are big enough to encourage vertical movement (thanks to the massive jumps and boosts characters can do now) so that you are never trapped by the hordes of enemies that come for you. In fact, combat in multiplayer is much more intense than in single player, mainly due to the sheer number of enemies the game throws at you. Teamwork is essential to take them down, especially if you’re playing on the Silver or Gold difficulties (which in turn give better rewards).

Sadly, the maps are often the same in layout. They are all squarish arenas with a mix of indoor and outdoor areas. Combine that with boring objectives and multiplayer becomes dreary soon enough. If not for the drive to get better gear, complete challenges or level up, I suspect many players will give up after just a few hours of play.

Framerate problems still plague the multiplayer and can be worse than in single-player due to the amount of chaos that can be happening at once. Even playing on a PS4 Pro, the dips in framerate and loss of responsiveness is quite noticeable. If you’re playing on a normal PS4, expect the same if not worse.

At the end of the day, Mass Effect Andromeda remains the weakest link in the Mass Effect series. While the multiplayer is fun, with hooks meant to keep you playing, it’s still shallow and repetitive. There’s no plot behind it, no narrative to drive you onwards like the single-player campaign. You’re playing only for the promise of better loot and gear. Also, while the Strike Team feature is a great way for those with a PS Plus subscription to get some rewards, it’s incredibly basic and barebones in features and feels more like an afterthought than a worthwhile alternative to multiplayer.

It remains to be seen if EA plans to improve the multiplayer in any way in the future but as it stands, the mode is nothing more than a minor distraction. It’s a pity though, for if the lag and technical problems are fixed and gameplay is improved, Andromeda’s multiplayer could’ve been something special. As it stands, it can be succinctly described (as Andromeda as a whole can be) as a disappointment and a tame tease of what could’ve have been.

Sal's just your average hardcore gamer. He started gaming on the NES in the 80s and has been ever playing since. Sal doesn't care about which platforms games are on, only that he wants to play them all!
Previous post The ultimate Marvel TV binge
Next post Earn rewards for playing PC games through Razer Cortex