Review – Little Witch Academia: Chamber of Time does justice to the source material 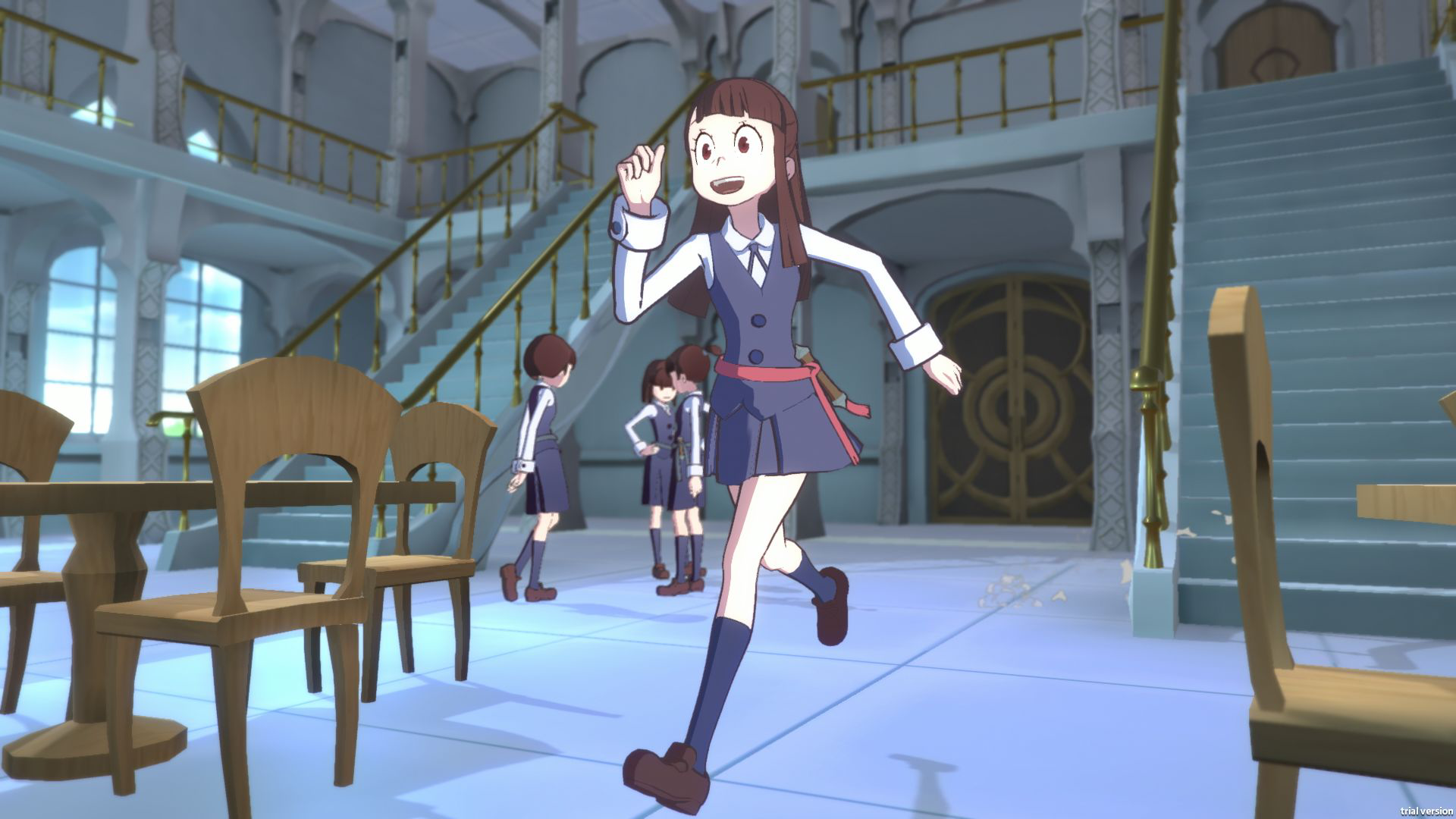 Since I had zero idea about the series, I figured watching a few episodes would help familiarize myself with the universe. Instead of the boring kiddie anime I expected, what I found was a series full of charm and heart. And while that does carry over to Chamber of Time in droves, there’s one missing element crucial for any game: fun. Little Witch Academia: Chamber of Time is broken into two distinctive parts: a school exploration that plays out like a visual novel, and a side-scrolling beat-em-up. In a nutshell, the game is let down by its average action-RPG parts, though it does redeem itself during the school exploration segments.

As Akko, you’ll experience all that the Luna Nova Magical Academy has to offer. Fans of the anime and movies will have a great time exploring the school’s grounds, visiting some of the famous locales as well as participating in various events. It’s great fanservice and I honestly would’ve preferred if most of Chamber of Time was made up of these visual novel moments.

Akko’s joined by school friends Sucy and Lotte, who join you right before the tutorial dungeon. The rest of the cast, such as Diana, Amanda, Constanze, and Jasminka, all join a little further down the road. Their involvement only begins once you find the hidden Horologium Chamber, center to the game’s plot. Chamber of Time isn’t an anime adaptation, but an entirely new story that sits well among the series (the show’s creators, Studio Trigger, animated the game’s cutscenes). Akko’s usual negligence has her sorting library books as punishment, but what should have been a dull task turns into a magical disaster when she stumbles upon a hidden door. Opening this door inadvertently breaks time, and what follows is a Groundhog’s Day sort of adventure where the day resets at midnight. Needless to say, Akko and friends have to set time back on course so that they can finally get to important student matters: their first summer vacation.

Like most visual novels, time progresses whenever you initiate events. While it doesn’t affect the dungeon crawling aspects of the game, time influences events that can only be started and completed at their required timings.

Mending time involves delving into the magical dungeons that the Horologium Chamber opens. Advancing the story gets you more magical keys, which represent the different dungeons you can dive into. These dungeons are all in a 2.5D side-scrolling style, where Akko and two others move from left-to-right with beat-‘em-up-style combos and enemies. Sadly, the fighting isn’t as fun as it should be. While the friendly AI is decent at supporting and keeping you covered, the enemy AI could use a bit more toughening up. They seem to stand around waiting to get hit for the most part, but maybe that’s because you’ll have trouble hitting them in the first place.

The stiff and awkward combat makes positioning Akko a pain in the ass. You can do multiple regular attacks (the strength depends on which button is pressed) but trying to line her character up is an exercise in frustration due to the slow attack recovery. This affects spells too, as most of them are executed in a linear fashion.

The combos and fights are very basic, and honestly there’s nothing interesting or innovative about the system. On top of that, the screen can sometimes get so chaotic with enemies and spell effects that it’s hard to pick out where Akko and her friends are. The UI is just as problematic, placing the character’s HP and MP bars in the upper-left corner when most of the action takes place in the lower half of the screen.

This frustration extends to the rest of the gameplay systems. You gain Magnitude Points as you level up, which are used to learn spells in the Horoscope section. However, the section is rather dense and unintuitive with its multiple pages, which makes learning new spells or improving older ones a hassle. There’s not much customization, either. While you can assign equipment, the changes are only in the background stats and not, for such a visually-heavy game, in the character’s looks.

As much as I’m griping over the battle system, my bigger issue with Chamber of Time is with the incredibly unhelpful map. For one, it doesn’t show which direction you’re looking at or where exactly Akko is – all it does is highlight your general area. Since the camera is fixed, it’s a major hassle trying to find your way around the school. It leads to plenty of wasted time, and a quick travel option would’ve been a very welcome addition. The lengthy load times between areas only makes getting lost worst, which is a bit puzzling when the areas aren’t that big or detailed.

Luckily, the characters all look pretty good. Though I wished for a few more frames of animation here and there, Akko and friends look incredibly similar to their 2D anime versions. Couple that with the same Japanese voice actors reprising their roles, and what you get is practically a bonus episode in interactive form – though it does take certain liberties for gameplay’s sake. I would’ve preferred for more character development, but since Chamber of Time is supposed to be set early in the 24-episode anime, I can understand why they kept things simple.

The score is noteworthy for its cheery, upbeat nature and hum-along tunes. There’s even a short musical intro when you start the game (not the anime’s theme), which makes the game feel even more like an OVA of the anime.

I’ll be the first to admit that Little Witch Academia: Chamber of Time has more than its fair share of problems. However, if you’re a fan of the anime I cannot emphasize enough how much you should play it, simply for all the magical goodness that Akko and company brings. It’s a charming game that does justice to the source material, and seeing Luna Nova up close is a definite plus. If you’re not already a fan though, then the game isn’t going to be noteworthy enough for a purchase; perhaps you’ll want to load up Netflix and see what the show is all about instead.

Little Witch Academia: Chamber of Time is out now for PC and PlayStation 4.
Developed by A+ Games. Published by Bandai Namco Entertainment.
A PS4 digital copy was provided for review. Sal's just your average hardcore gamer. He started gaming on the NES in the 80s and has been ever playing since. Sal doesn't care about which platforms games are on, only that he wants to play them all!
Previous post Steam’s Summer Sale takes off, has a new browser game
Next post Jump (back) into World of Warcraft for free this weekend