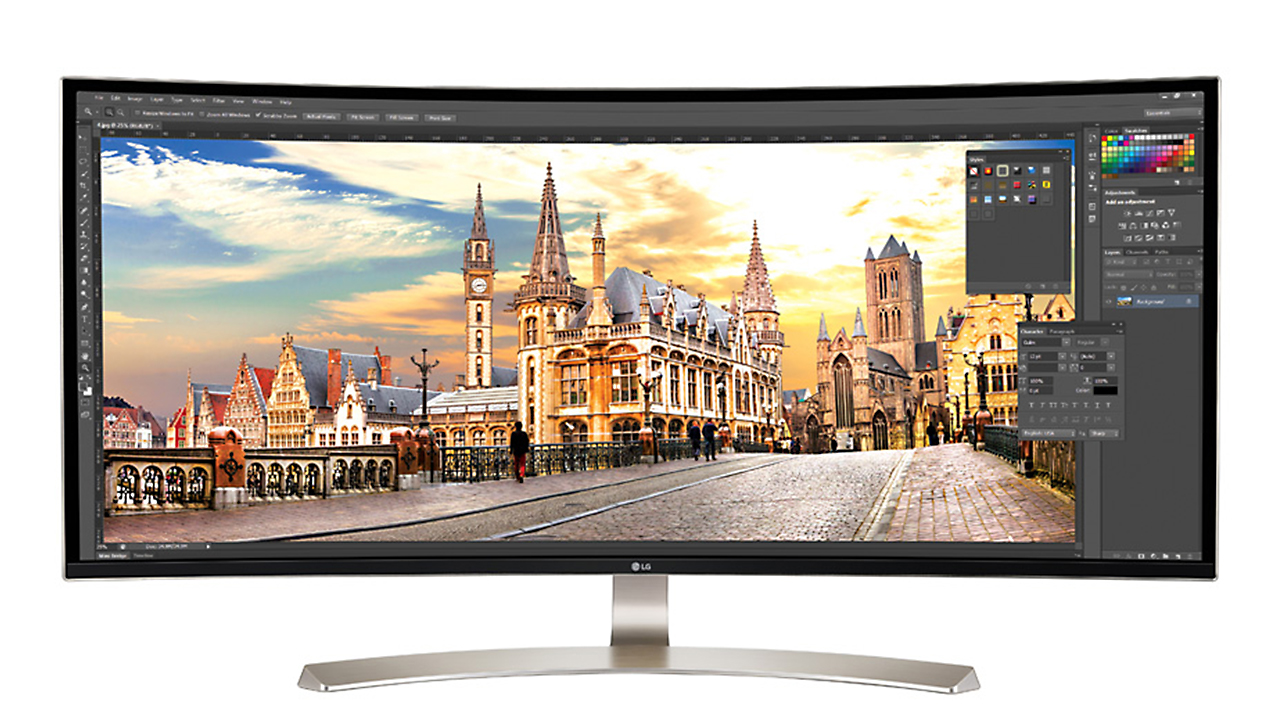 Like mice and keyboards, monitors are a highly personal choice. Other than space and budget constraints, there are questions on resolution, panel types, refresh rates, and so much more. It’s why we have so many options, and where the LG 38UC99 is concerned, that option reads: “Go big.”

As a 37.5-inch 3840×1600 IPS curved monitor, the LG 38UC99 is targeted at users for whom size does matter. It conforms to the common 21:9 aspect ratio for compatibility, yet ekes out the 34-inch crowd when it comes to selling the perks of ultrawide: roomier content creation, easier multi-tasking, and better immersion. That it was the first to package a curved IPS helps boost its appeal among photographers, designers, and other creatives. Interestingly, the inclusion of AMD FreeSync support, 1ms motion blur reduction, and a refresh rate that tops out at 75Hz suggests some gaming aspirations too. Let’s start, as we normally do, with construction. Sitting atop a sleek, curved stand is an attractive, minimalist screen enclosed in white plastic and silver trimmings. That glossy white is limited only to the back, allowing the massive 37.5-inch panel to dominate the front. The silver trims found along the top and sides are kept to a bare minimum, transitioning to a black border under a centimeter thick before the actual display begins. Only a slim black bezel traces along the bottom, adorned with the LG logo.

It’s an aesthetically pleasing monitor, in line with LG’s high-end offerings, although matching it with most gaming hardware may prove challenging since white isn’t common. To alleviate that, you may take advantage of the VESA mounts to plant it on a wall. Regardless of it being mounted or on its stand, just be mindful of how large and heavy the monitor is as it does exhibit wobble under physical contact. While I’m confident that it’s secure, I wouldn’t want to put any unnecessary stress on the joints. As for adjustments, we’re only looking at height and tilt.

For connectivity there’s DisplayPort 1.2, a pair of HDMI 2.0, USB-C, and a headphone jack. The LG 38UC99 also comes with a pair of USB 3.0 ports, one of which is equipped with Quick Charge – a nice bonus, but they’re lumped in the back together with the video and power inputs so they’re not as accessible as they could have been. Hidden from sight is Bluetooth audio support, channeled through a pair of integrated 10-watt speakers that perform decently. When unpacking the LG 38UC99, you’ll find a slip of paper that’ll easily stand out from the rest of the documentation. It’s a Display Quality Assurance Report, noting your unit’s serial number and measurements for gamma, color temperature variation, and color difference. The monitor is factory calibrated for a color temperature standard of 6500K and color gamut over 99% sRGB. It’s free from obvious viewing angle color shifts, except towards the extreme ends of the curves — they didn’t bother me but those doing color-sensitive work should double-check how their own display turns out.

Speaking of which, the curvature is pleasant and does a great job at enveloping one’s vision. The image looks natural whether it’s browsing the web, working on documents, or indulging in some entertainment, and while it is big it doesn’t take long to get accustomed to. Unfortunately, the monitor does suffer from an IPS weakness: backlight bleed. To be fair, I was hunting for it and ultimately found them during dark movie scenes and at black loading screens, although it wasn’t as distracting as I thought it would be; during regular use, the bleed may as well be non-existent.

There isn’t much to say about image adjustments because we didn’t have to do much out of the box, merely lowering the brightness by a few points and then exploring the rest of the on-screen display menu.  There’s the usual spread of preset and custom picture modes, as well as a black stabilizer slider and response time overdrive. LG’s ‘1ms Motion Blur Reduction’ is also present, which helps to reduce perceived motion blur so long as the monitor is running at 75Hz via DP – it does make for sharper images, though given the ghost-free capabilities of today’s super-fast TN panels it wasn’t much of a wow factor. Instead, I’d like to highlight the dual link functionality and aspect ratio options, both usability features that would see plenty of use. The former is basically a 50:50 split to display two separate sources, say the PC and a console or a Mac; single-source split-screen options do exist within the OSD. And while the monitor’s default setting is to retain the original aspect ratio, the LG 38UC99 can also go full wide, use 1:1 pixel mapping, or adopt different 21:9 cinematic modes to cater to different needs.

As popular as the 21:9 format is, not all content is ultrawide-friendly. While windows can be easily snapped and resized around the spacious virtual desktop – you can easily fit three or more browser pages at any one time – it’s the fullscreen experiences such as games and movies that will take you for a loop. The pillarboxing, and sometimes even windowboxing, is a mild annoyance for video games but it can be a bigger problem when it comes to movies. Since the unused portions aren’t completely black thanks to the backlighting, they can prove distracting for high-contrast or low-lit films. There’s also that nagging sense that the space you dearly paid extra for isn’t being put to use.

All that said, when a game does make use of the full 3840×1600 resolution – Sid Meier’s Civilization VI, Ashes of the Singularity, and Pillars of Eternity to name a few – the end-result is nothing short of spectacular. The wide field-of-view lends a level of immersion quite unlike virtual reality experiences, where one’s peripheral vision is obscured by the headset. I’m not saying that it’s comparable to an IMAX theater in terms of sheer visual presence (and TVs aren’t a comparison due to viewing distance) but LG have hit on something special here. 34-inch monitors are impressive, but a 37.5-incher makes you stop and admire. Let’s not forget that LG are no stranger to world-firsts, for they introduce the ultrawide back in 2012. As a daily driver for productivity, the massive amount of desktop space this ultrawide provides is simply hard to beat, with a respectable image quality that would satisfy most users. For recreational purposes, however, the situation is a little less clear-cut. Hardcore enthusiasts are likely waiting for the new breed of HDR-compatible gaming monitors, while the 60-75Hz cap is going to dissuade players accustomed to 120Hz and higher. There being no NVIDIA G-Sync version also excludes a sizeable number of potential buyers, in addition to those looking to get into the 4K resolution space.

Yet the monitor isn’t entirely devoid of gaming chops, making a strong case for itself among strategy and CRPG fans where scale has a difference. There’s also the fact that getting games to perform well on this monitor doesn’t require an expensive PC rig, so single-player shooters and cockpit-view games stand to benefit from the wide, seamless view. It’s just that at S$2,299 you need to be sure of what you’re locking yourself into as 4K HDR gaming grows.

Among the nicer and pricier monitors we’ve encountered, the LG 38UC99 is certainly a memorable and attractive all-rounder. It’s an upgrade worth seriously mulling over, especially if you work just as much as you game on your computer; the freedom that comes with all that extra virtual space cannot be understated. If nothing else, we were genuinely downtrodden after repacking our review unit – things just don’t feel the same.

Ade thinks there's nothing quite like a good game and a snug headcrab. He grew up with HIDEO KOJIMA's Metal Gear Solid, lives for RPGs, and is waiting for light guns to make their comeback.
Previous post Review – Call of Duty: WWII (PS4) multiplayer could have easily been a disaster
Next post PS Plus Nov ’17: Wasteland 2, Until Dawn: Rush of Blood, and more