Review: Get gender bent in the Three Kingdoms with Koihime Enbu RyoRaiRai 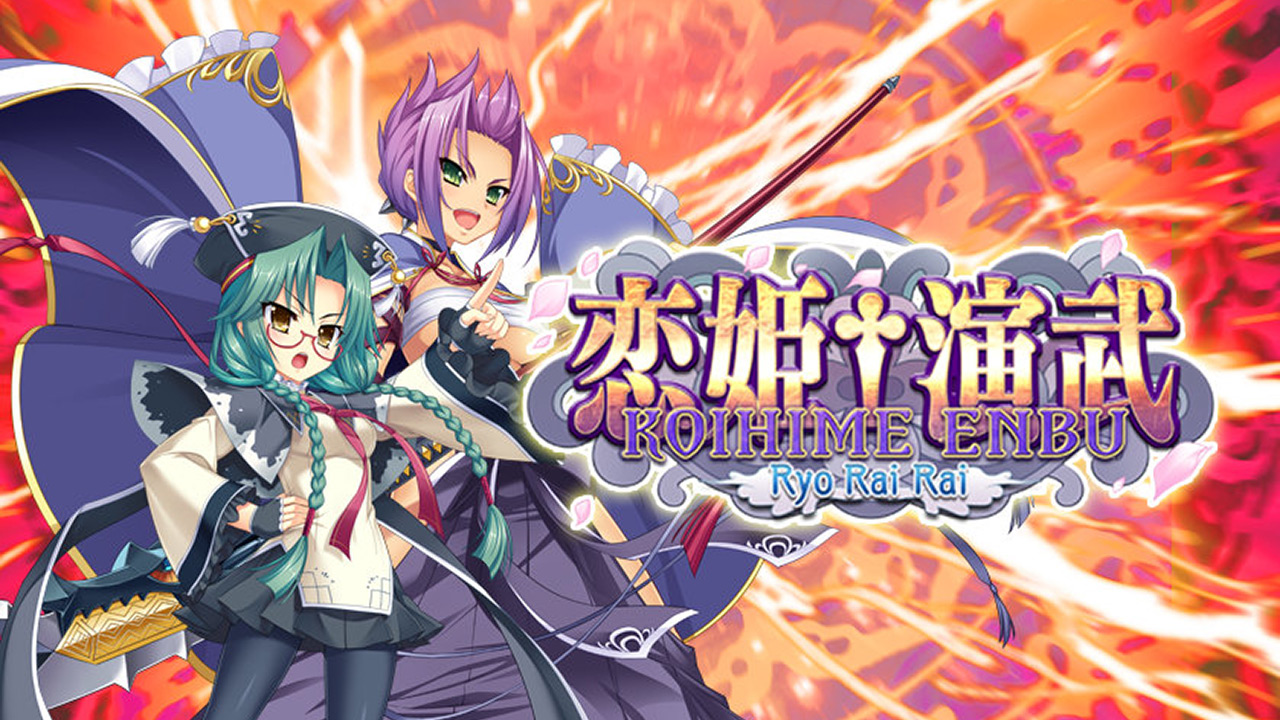 There are some weird games and anime from Japan but, for the life of me, I’ve never heard of a gender bent version of the Romance of the Three Kingdoms. I know better now after playing Koihime Enbu RyoRaiRai, a surprising discovery that turned out to be a pretty decent fighting game.

If you’re an old-school fighting game fan then you might say that Koihime Enbu somewhat resembles SNK’s awesome Last Blade and Samurai Shodown games, since they all have weapons-based fighting styles. Each character is unique and surprisingly fun to play; I’m pretty partial to Gakushin’s devastating unarmed combos and to Sonken’s offensive sword rushes.

All 14 playable characters are based off Romance of the Three Kingdoms, the historic Chinese novel that inspired Dynasty Warriors and so many others. Unless you’re really familiar with the characters it’s a bit hard to pinpoint who they all are. I’m guessing Kakoton is Xiahou Dun because of his eyepatch, and that Bacho is supposed to be Zhao Yun, but there are wikis you can look up online if you’re curious. 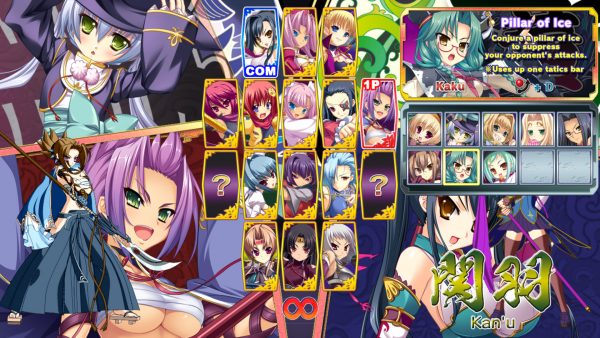 After choosing your character, you’ll need to pick a support with the right set of skills to complement yours. Fighting in the game is heavily reliant on solid hits, kind of like Street Fighter II or Samurai Shodown. Combos are present but they take a backseat to other aspects of the gameplay system: spacing, zoning and timing have more emphasis, though the combat’s fast-paced nature does make for some interesting matches.

The fights are definitely more “grounded” than most other fighters due to the huge amount of anti-air attacks available. Jump-ins are rarely safe, which makes ground combat the main method of engagement.

Then there are the Hougeki moves, a risk-reward ability accessible by everyone. Hitting an opponent with a Hougeki stuns them, allowing you to do combos, knock backs and other cool moves. If it misses, you’re left wide open to a counter-attack. 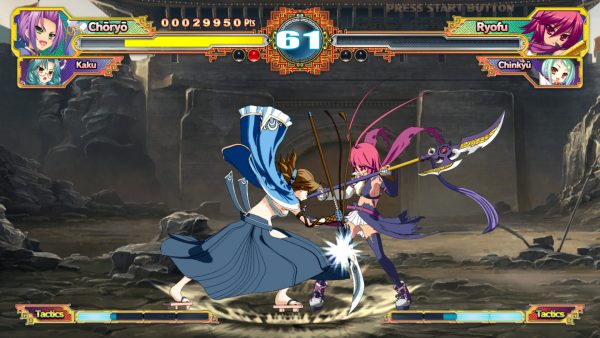 It probably won’t be surprising to learn that Koihime Enbu started as an adult PC eroge. It’s since moved on to be more mainstream but the buxom designs have stayed. I honestly think it’s a bit over the top and detrimental to the game’s success. People might overlook or shortchange it just because of how it looks, which is a damn shame as the underlying fighting mechanics are pretty solid, if a bit simple.

That’s pretty much the best way to describe the game. While there are some good ideas, their implementation as a whole feels rather basic and bare-bones. Take for example the lack of a tutorial, which is a rather glaring oversight for a fighting game. There are also no modes for Story, Team Battle or Survival, which are prevalent in other fighters. All you get is an Arcade Mode, offline and online Versus modes, and a Training mode.

The visuals in Koihime Enbu are surprisingly good for a budget release. It’s all in 2D but the art is high resolution, like the character models in BlazBlue. They animate smoothly (I love some of the standby animations) with tons of flashy moves and effects that are on par with modern fighters. While it doesn’t hold a candle to Dragon Ball FighterZ’s presentation it certainly isn’t that bad either. 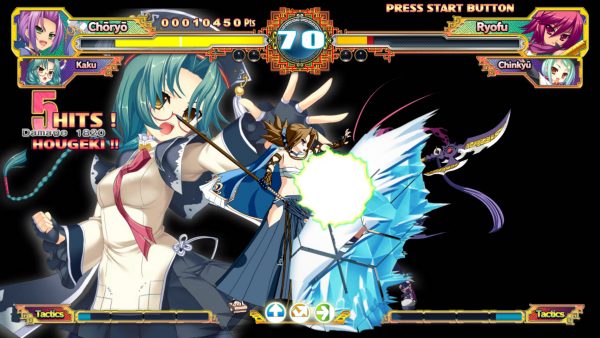 The backgrounds are pretty decent too, evoking a Samurai Shodown feel. A huge plus of the Romance of the Three Kingdoms setting is that you get to see locations such as the Red Cliffs of Chibi, which should be exciting for fans familiar with the epic.

While I’m receptive to the visuals and don’t really mind the racy character designs, I’m definitely not a fan of the voices. They’re a a good example of stereotypical anime girls, which usually means high and shrill or deep and masculine. The latter gets a pass but I find the former incredibly annoying after a while.

It’s the same with Koihime Enbu’s music. It’s a mixture of techno, synth and rock like Guilty Gear, but unlike Daisuke Ishiwari’s ‘Midnight Carnival’ and ‘Awe of She’ the songs in this game don’t really do it for me. They sound rather generic are likely to be forgotten as soon as you stop playing. 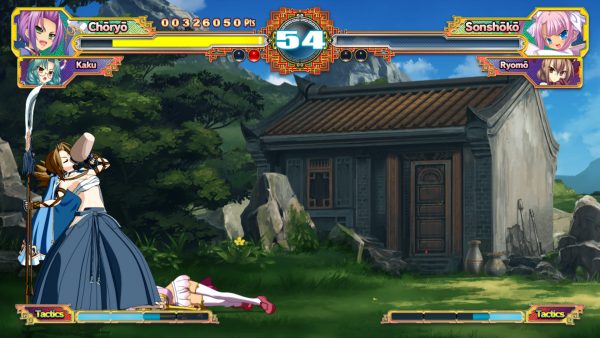 Koihime Enbu RyoRaiRai won’t unseat the Tekkens and Street Fighters of the world but it’s definitely a gem in the rough. It brings solid gameplay and an interesting cast of characters, and you certainly could do much worse in trying to scratch that fighting game itch. I just wish there was more meat to it.

Koihime Enbu RyoRaiRai is out now for PC and PS4.
Developed by Unknown Games. Published by Degica.
A PS4 copy was provided for review. 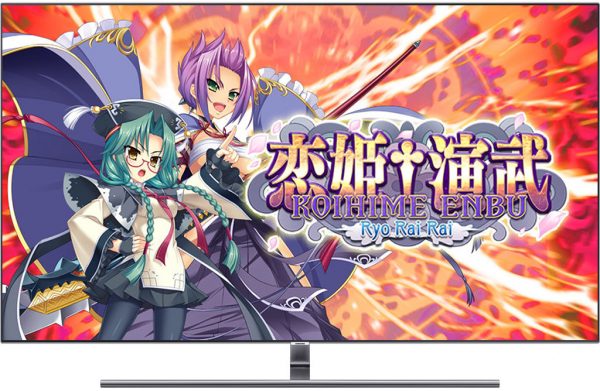 Sal's just your average hardcore gamer. He started gaming on the NES in the 80s and has been ever playing since. Sal doesn't care about which platforms games are on, only that he wants to play them all!
Previous post Command & Conquer series to get remastered by original developers
Next post Sony will not be at E3 2019