Home / Breaking News / Review: Kingdom Hearts III feels stifling when it should have been full of whimsy and magic

Review: Kingdom Hearts III feels stifling when it should have been full of whimsy and magic 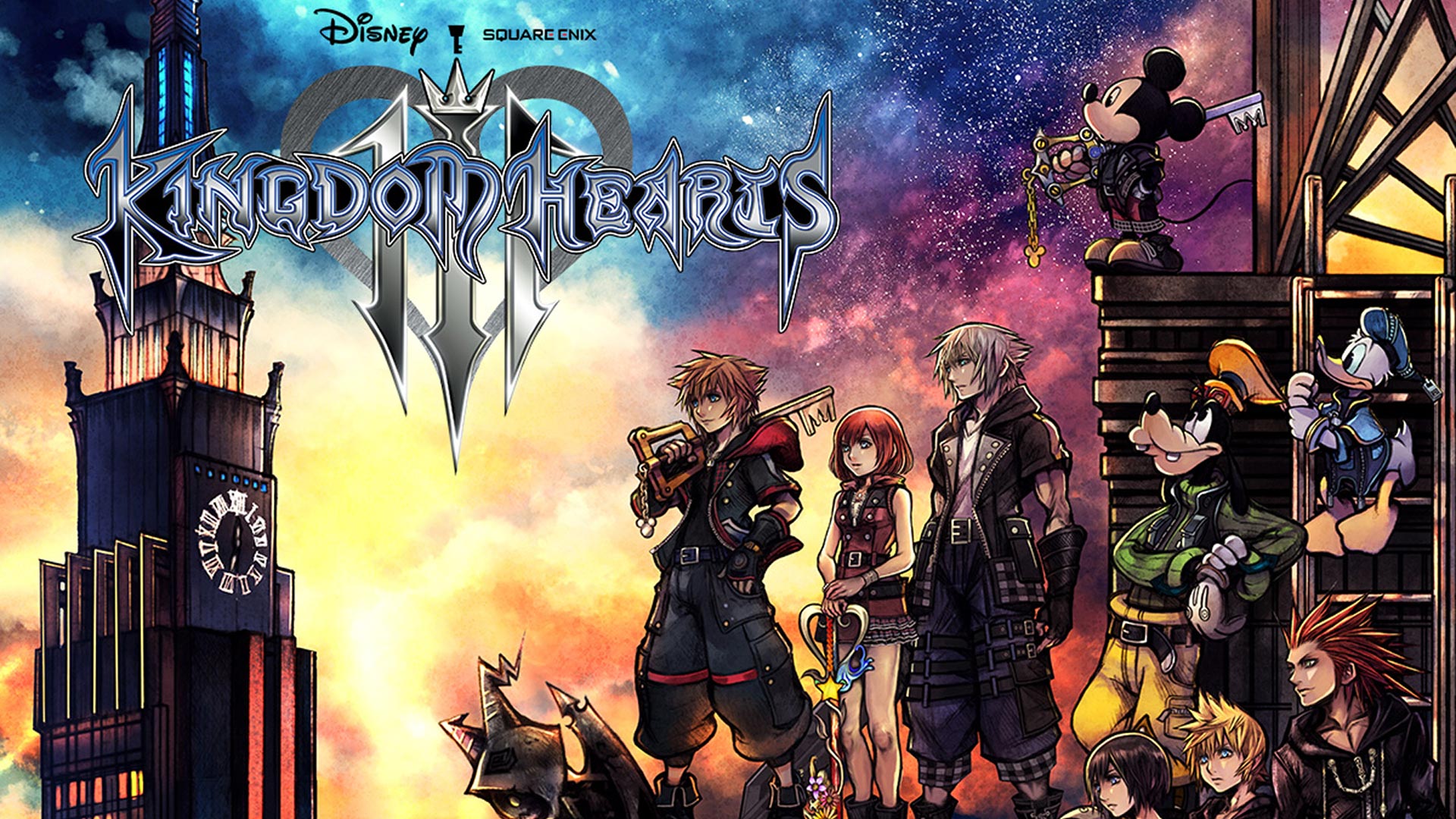 It has taken Square Enix about 13 years to come up with a numbered sequel to 2005’s Kingdom Hearts II. Entire franchises have come and gone in that time (we still miss you, Dead Space), and maybe that’s why Kingdom Hearts III feels like a relic from a bygone age.

There have been a ton of side stories and prequels released since then, and all of them are connected in some way to Kingdom Hearts III. That’s the first strike. The story is incredibly dense and complex, alienating practically anyone who hasn’t played the earlier games. 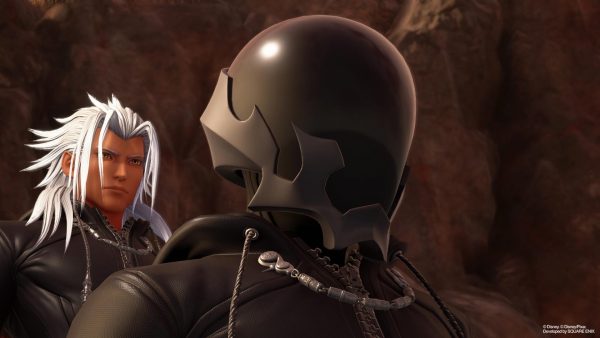 There is a handy recap mode but the episodes are too abbreviated; they miss all the nuance and detail that someone playing the games would have picked up on. Also, the series is filled with time travel, weird terminologies, and twists, so there’s no way short summaries can do the story justice. It certainly doesn’t help matters when the game then constantly references past events, whether you know them or not.

As for the allure of surprise and discovery, of seeing which world Disney world Sora ends up on, Kingdom Heart III also disappoints. It seems as if all the included worlds are either repeats from past games or based on recent films. There are Pixar worlds like Toy Story now, but where are Disney’s big guns such as Star Wars or Marvel? Imagine getting to dress up in Jedi robes or Spidey’s suit. It feels like a tremendously missed opportunity when the only representation is Marvel’s Big Hero 6. 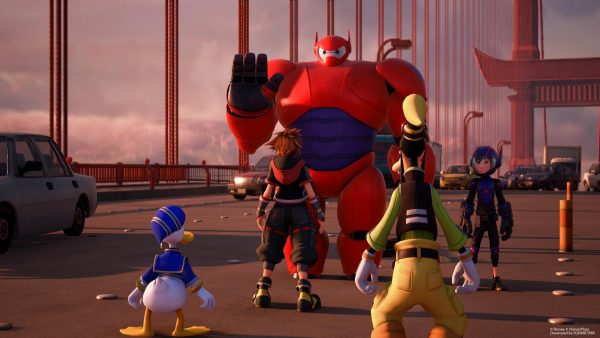 I’d also love to know what happened to all the Square Enix characters that used to appear in previous games. Most of them are missing in action, making this installment lean even more towards being a Disney promotion, rather than a star-studded collaboration between two giants.

With all the preference for newer material dominating Kingdom Hearts III, you would then expect that combat would be in line with modern games. However, that’s not the case as they’ve stuck close to the Kingdom Hearts II formula. That also means that old issues have carried over. 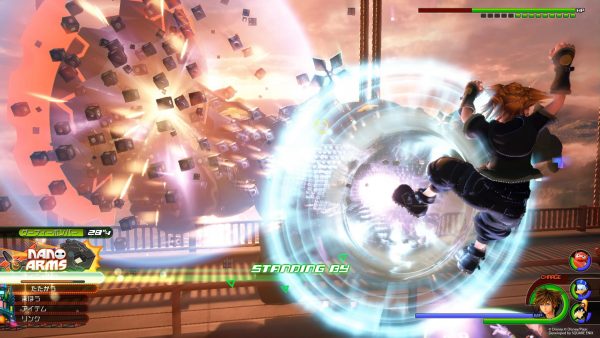 The camera work is still atrocious, the combat system is still shallow despite the tweaks, and the friendly AI could still use more work. Battles that should have felt epic end up being clumsy, button-mashing affairs that require little skill. Just press the attack button until you can call in a summon.

It’s a damn shame when the combat can get massive in scale, like the early battles against the Titans from Hercules. Instead of a challenging, memorable showdown, all I get is a protracted fight about multiple enemy health bars, against foes with few attack patterns. Yawn. 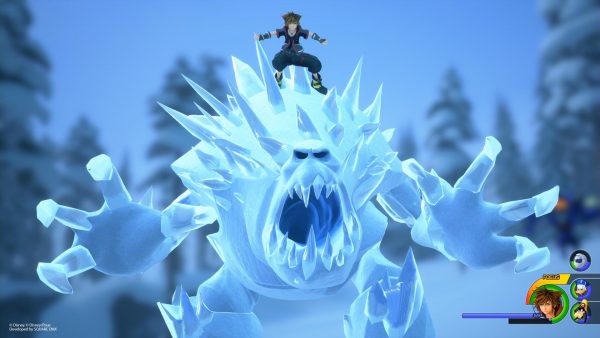 The only major addition is the ability to change into different forms based on which Keyblade you equip. Sometimes you can summon rides from Disney theme parks to devastate your enemies. You can also summon Disney characters to help you, but the selection is paltry considering the legion of characters Disney has. What I would pay to have Darkwing Duck as a summon!

Despite the small number, I like most of the summons: they’re astoundingly flashy and reward you with tons of damage. The Disney rides I’m not a fan of as they feel incredibly forced; even in a game that’s essentially an amalgam of cartoons and movies. 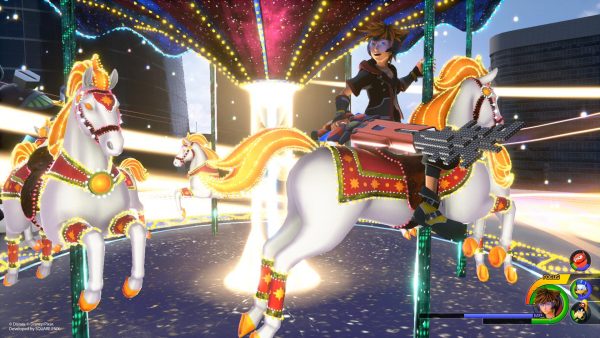 Sadly, the flashy nature of those summons belies the rather plain graphics of Kingdom Hearts III. The environments are simple and bare, while the character models look straight out of 2005, only with sharper textures.  I guess it’s due to the cartoony nature of the Disney worlds, but I feel like they could have done more. This might be a blessing, though, as the unlocked frame rate makes the game an incredibly smooth and responsive experience.

Unfortunately, the audio side doesn’t fare as well. The entire game is fully voiced now but some of the characters are pretty bland, apart from Disney stalwarts like Mickey, Donald, and Goofy. Sora, in particular, can come off as pretty irritating, which can be tough to deal with when he’s the protagonist. The music feels a bit hit or miss too, with the only strong moments being the recognizable Disney tunes. 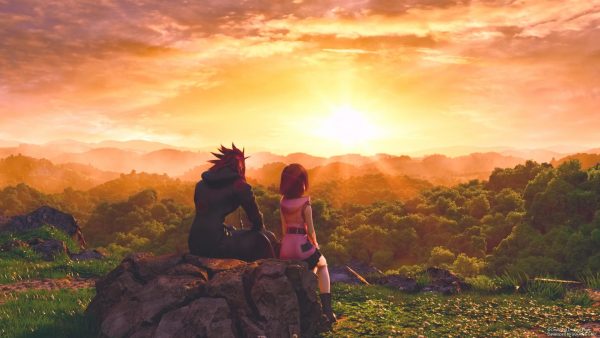 Kingdom Hearts III is the epitome of a series so mired in its own lore that it winds up suffering for it. Yet it also gets dragged down by archaic systems that don’t quite feel at home among modern games. Playing it feels stifling when it should be full of whimsy and magic, the only jaw dropping moments reserved for the few summons available.

If you’ve been with the series since the start then you’re definitely in for some major payoffs, as Sora and crew’s struggles against Xehanort and the Organization heads to a long-awaited resolution. It’s a fun game for returning fans, and no other series has managed what Kingdom Hearts attempts. But if you have no idea who or what they are, then I think you’re better off skipping the series entirely or picking up the earlier re-releases instead. Let’s hope the next installment, if it does come, won’t have to deal with all the baggage of the past decade.

Kingdom Hearts III is out now for PlayStation 4 and Xbox One.
Developed and published by Square Enix.
A PS4 copy was provided for review.

Sal's just your average hardcore gamer. He started gaming on the NES in the 80s and has been ever playing since. Sal doesn't care about which platforms games are on, only that he wants to play them all!
Previous post Review: The wait for the Resident Evil 2 remake has been worth it
Next post PUBG Lite’s Beta Test will include four more countries, including Singapore!