Review – Kamen Rider: Climax Fighters (PS4) is one for the fans 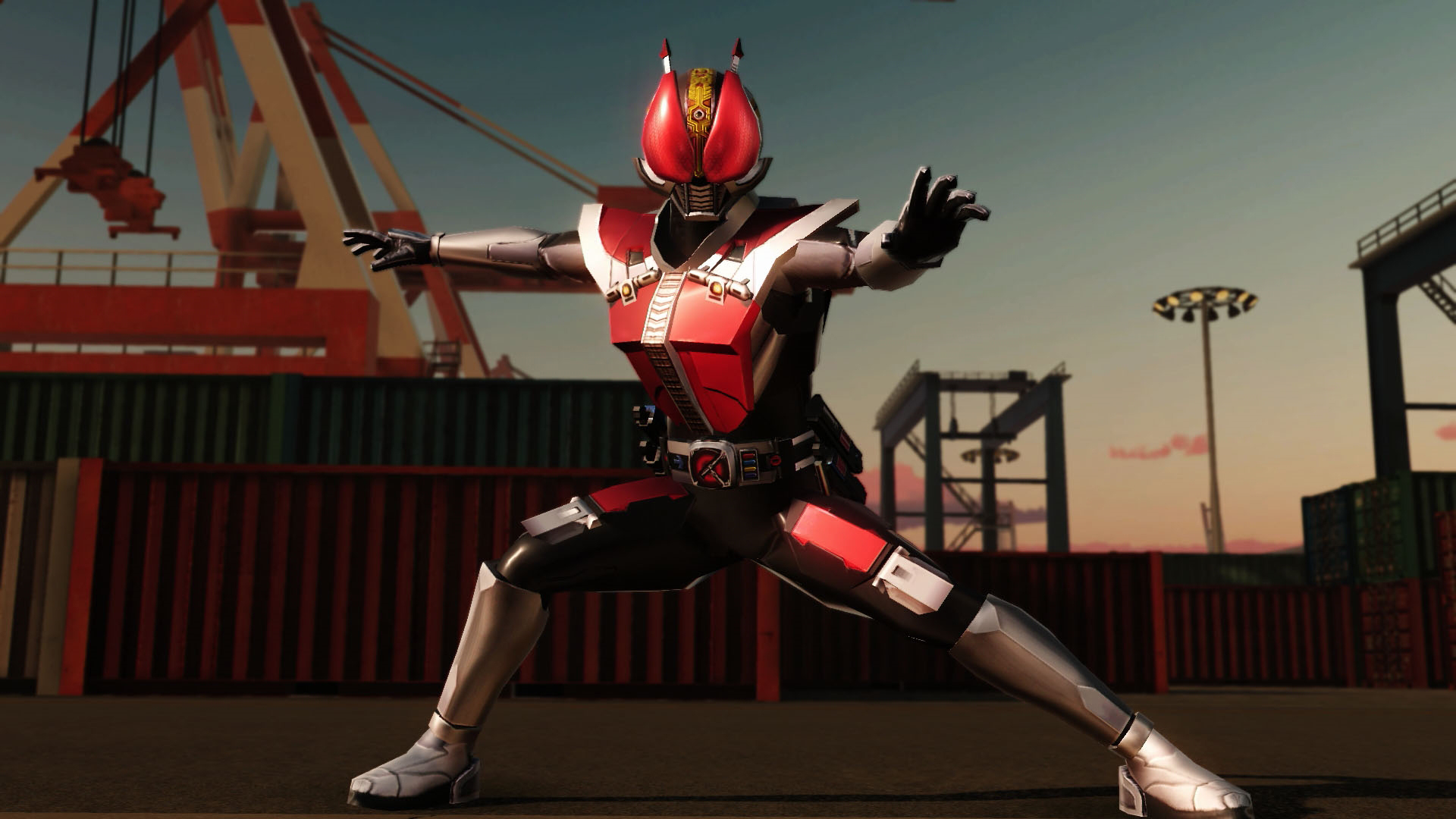 Confession time: I’ve not seen a Kamen Rider episode since I was a kid in the ‘80s. It was the Malaysian version, which I highly doubt was accurate, and all I remember at this point are Kamen Rider Black’s fiery punch and his flying kick.  In other words, I’m a noob. I went into Kamen Rider: Climax Fighters expecting nothing, and left honestly surprised at how decent it actually is.

There are 28 Riders in the game, and fans of the series will probably recognize heroes such as Faiz, Drive, Mach, or Kabuto. It’s a neat touch how they all feel distinct enough from each other. Black is exactly like I remembered with his high-flying martial arts, yet Hibiki (one of my new favorites) plays completely differently. While his taiko drum pounding moves are weaker, they can do massive damage when charged. I also just love how it looks.

If you’ve played the recent Gundam Versus then Climax Fighters will feel very familiar. Swap out the mobile suits with masked heroes, reduce the fights to smaller duels, and you pretty much have the game. Even the combat system is the same, once you try out the lock-on and blocking mechanics. However, the Kamen Rider version works better simply because it’s a much more focused affair.

Although the arenas can be multi-leveled, their small size means the action is never far. And while the fighters all use the same basic button combos, their moves are all different. In a sense, it’s like Nintendo’s Super Smash Bros. series, where directional input and face buttons determine which attacks or combos are executed.

The game’s tutorial will explain everything you need to know. It’s really in-depth, and you can even browse the tips section under the options menu if you find yourself forgetting anything.

There’s a pretty basic fighting system, where you can cancel moves into dashes or dodges, but it doesn’t get more complicated than that. It’s easy to get a hang of, so it’s perfect if you’re introducing somebody to gaming. However, once you’re familiar with those there’s not much left to master.

Knockdowns and wall hits take a weirdly long time to recover from, and are pretty much unavoidable if you’re caught in a combo. You can do a quick recover, but only during specific times. Blocking can also feel imprecise, as there’s a bit of a delay from when you hit the button to when the animation executes. The alternative would be to dodge (double-tapping a directional button) but it’s unreliable, as the game doesn’t seem to register it at times. Due to all these, Riders tend to keep a safe distance, constantly running away until somebody makes a mistake to capitalize on.

Thankfully the fights don’t degenerate into staring matches. Kamen Rider: Climax Fighters has a Hero Voltage system that penalizes you being overly defensive. Stay out of the action for too long and you’ll enter Low Voltage, where you’ll take increased damage. Play aggressively and High Voltage will boost your attack and defense. It’s a nice balancing system to prevent excessive turtling, but it can also feel a bit unfair when you’re caught in a relentless pummeling.

Apart from the basic hits, all Riders have special Skill and Evolution attacks. Skill attacks are unique — some Riders gain new forms, others unleash a completely new set of moves. Pretty straightforward.

The Evolution gauge, on the other hand, is different. Once it’s filled, you can change into a faster, stronger, and tougher Rider form until the meter runs out. It’s not a push-to-win button, though, as this form locks away the ultimate Super Rider Arts attacks. You can only use these once per match but, if you manage to land those hits, it’s devastating.

Evolution Burst comes with other,  additional benefits. Trigger it while you’re hammering away at an opponent and it’ll freeze them in place, leaving them utterly at your mercy. Trigger it when you’re on the receiving end and it serves as an uninterruptible knockback, pushing your assailant away.

Like the combat system, there’s not much meat to the Kamen Rider: Climax Fighters as a whole. Apart from Free Battle, where you can customize fights and set your own rules, there’s only Mission and Online Play.

The Mission mode is a fun diversion, letting you go a self-contained adventure with its own plot. Unfortunately, the AI is pretty stupid even on Hard difficulty. You can spam an attack, such as Rider Build’s “Hawk Gatlinger”, and the enemy AI will mindlessly eat it over and over. If you decide to not cheese it and fight fair, they become somewhat passable.

Completing these stages for the first time unlocks some avatars. However, there aren’t a lot of missions in the first place, and replaying them doesn’t award anything new. Once that’s done you’re pretty much stuck with Free Battle.

Don’t expect much from Online Play, either. I hopped on during launch week, on a Saturday afternoon, and spent more than an hour just sitting in the matchmaking queue, waiting for somebody to show up. It’s not my settings either, as I’ve set it to accept any condition. I eventually found one Ranked 2v2 match, after waiting nearly two whole hours. Either there’s literally nobody playing online, or the matchmaking is broken.

It’s nice that you can customize your avatar with the masks and belts of the various Riders, but the insanely long queue times makes it all pointless. Player Match isn’t much better, since trying to find a room is like finding a needle in a haystack. I spent 30 minutes searching and reading “Room Not Found” error messages. Again, either matchmaking is borked, or nobody is playing. Not the best looking game around

One of the biggest disappointments in Kamen Rider: Climax Fighters are the visuals. The game honestly looks like it belongs on the PS3. Rider models are laughably basic and the texture work can be pretty bad. Take no further look than Black’s arms, with their low resolution textures of the wires or whatever they’re supposed to be. It’s not like the game’s stages are expansive or visually demanding, either. They’re small, pretty open, and devoid of any environmental interaction. Apart from the rooftop stage, none of them even have any weather effects, so I’m wondering what’s holding the graphics team back.

Even the flashy Super Rider Arts cinematics look bland, and they’re supposed to represent the ultimate move a Rider is capable off. Presentation is everything for a Tokusatsu series (it literally means “special effects”), and it’s sad that the game doesn’t live up to genre expectations. I can’t really judge the voice acting and music since I’m not familiar with Kamen Rider, but they serve their purpose and are nothing to shout about.

Kamen Rider: Climax Fighters isn’t a top-tier game like the Soul Calibur or Street Fighter series. However, as game made for the fans it does accomplish what it sought out to do: to create a fun fighting experience that pits generations of Riders against one another. It might not impress with its dated visuals and basic mechanics, but if you’ve always wanted to see Riders Mach and Forze duke it out then Climax Fighters is definitely your game.

Kamen Rider: Climax Fighters is out now for PlayStation 4.
Developed by Eighting. Published by Bandai Namco Entertainment.
A copy was provided for review.

Sal's just your average hardcore gamer. He started gaming on the NES in the 80s and has been ever playing since. Sal doesn't care about which platforms games are on, only that he wants to play them all!
Previous post Doors open for PlayerUnknown’s Battlegrounds on Xbox One
Next post You can now play The Last Guardian (PS4) in VR mode for free