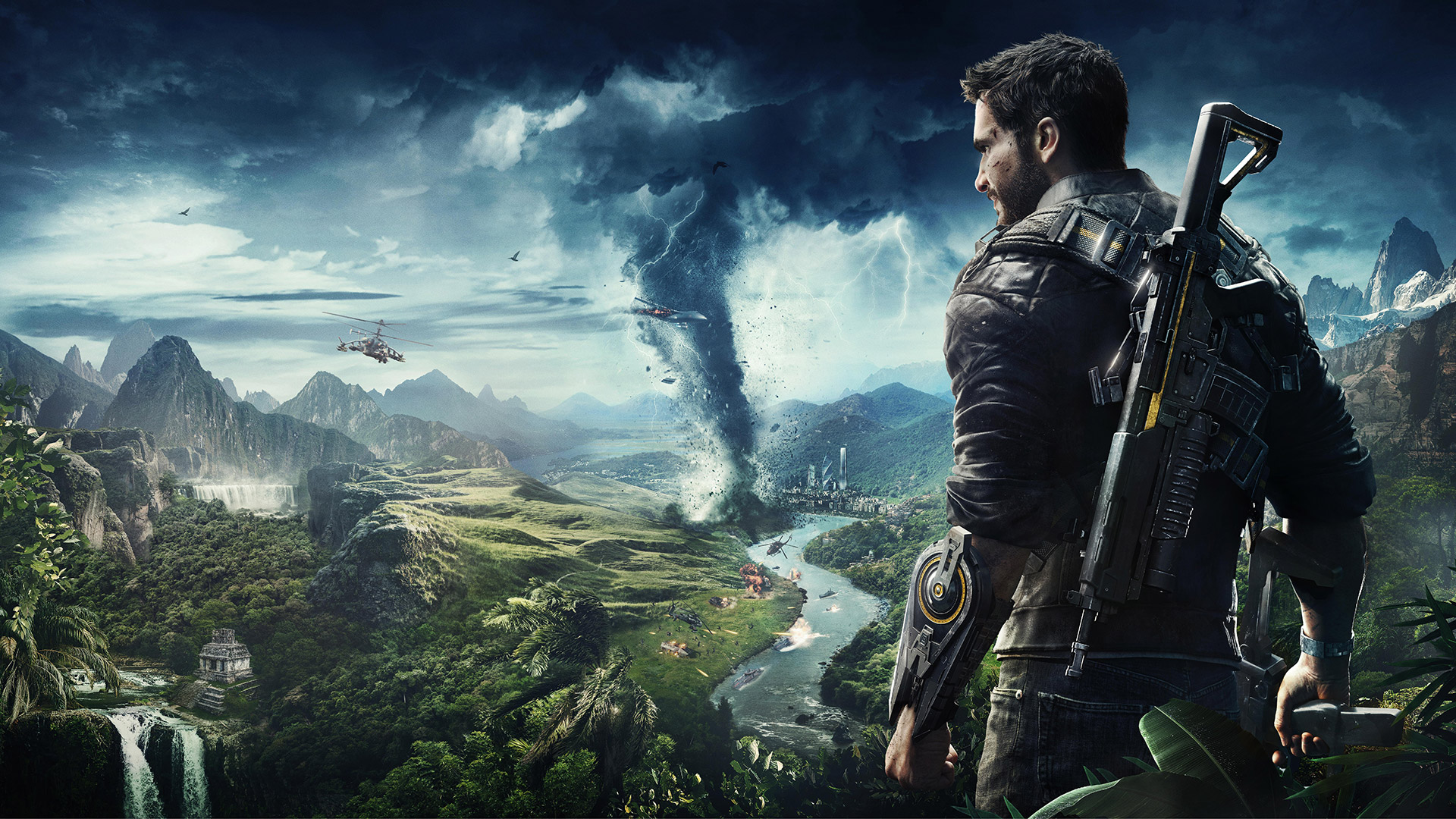 Despite its rocky launch and tremendous technical issues, Just Cause 3 ended up being one of my favourite games of the last few years; it’s safe to say I was really looking forward to even bigger mayhem in Just Cause 4. Sadly, the game simply trades in the old technical issues for a whole boatload of new ones, without ever rising to become anything more than above average.

After liberating his homeland of Medici, series protagonist Rico is back to take down another threat. This time, he’s off to the fictional South American country of Solis to tackle the Black Hand directly. You might remember these guys as the hired goons from Just Cause and especially Just Cause 3, as their survival always felt like one of the worst unresolved threads from that game.  It seems that developers Avalanche wanted to save that showdown for a sequel, and they’ve even added a personal twist too. To keep it short, Rico comes across rumors that his father had worked on secret weapons for the Black Hand at some point, so he goes digging for the truth in-between bouts of blowing everything up. 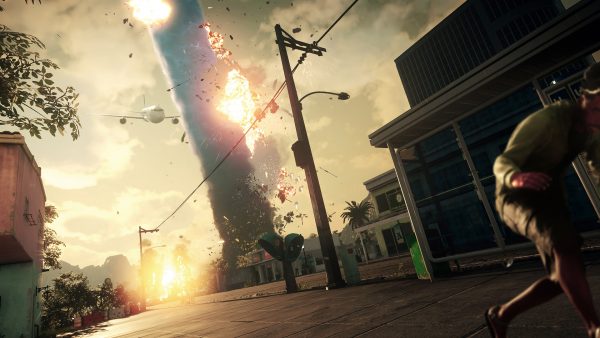 The blowing things up portion should be familiar to old fans, as Just Cause 4 is pretty similar to the previous game in nearly every aspect. The big exception is that we now have multiple environments with extreme weather: tornadoes, thunderstorms, sandstorms… they’re all there. The missions that feature these are some of the game’s best, showing off the crazy environmental effects and destruction the game is capable of.

Other than that, you’ll be liberating the many different regions as before. As mentioned, there are a ton of new environments now so you’ll go from forests to deserts to even snowy mountains. It takes quite a while to travel the whole map though there is a quick travel option you can unlock. However, it has a cooldown and I personally like to fly with the wingsuit everywhere instead. Sure, it’s slower, but what’s the rush?

To liberate a region you’ll need to spend Squad Reserves, an in-game currency you get from unleashing destruction. It’s definitely a smart way to get you wrecking no matter what you do, though the meter fills up a bit too slowly for my taste. Each region has its own cost, with some only requiring a single Squad Reserve unit while others needing more. It’s only after you’ve liberated a region and moved to its frontlines, shown on the map,  that it’s missions will unlock. 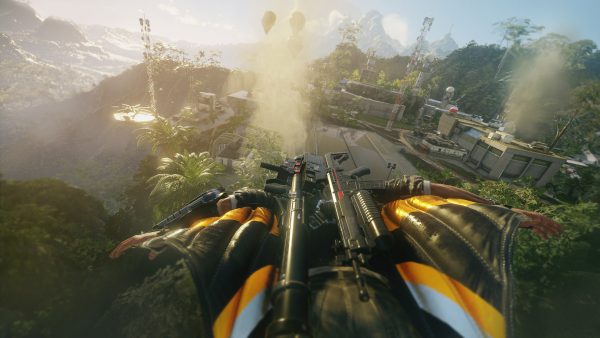 Story missions feature prominently on the map but the cinematics and plot seem much thinner when compared to Just Cause 3. There’s not a lot of time spent on setting up the story or set pieces, just some quick cutscenes and you’re off. While the missions themselves are pretty bombastic, they don’t feel as impactful as before. That goes for the general story too, as Rico’s personal stakes didn’t feel as significant as his previous desire to liberate Medici.

The issue lies in the boring filler missions you must complete to access to the story missions. They’re bland with similar, repetitive objectives that don’t have any bearing on the plot. Find and destroy generators, hack an objective, that sort of thing. The only thing going for these filler missions is their open-ended approach, as you’re free to be spontaneous or creative with how you accomplish them. Don’t want to shoot down an enemy chopper? Use the grapple and smash it to earth. Enemies have heavy armor? Use the grapple and send them floating away with helium balloons.

Yup, the grappling hook now comes with three new attachments: the Retractor drags a target to its anchor point, the Air Lifter lifts almost anything you fire it at, and the Booster attaches a reusable rocket booster to its target. On top of that, each has individual mods you can unlock to influence their behaviour. The customization options aren’t as robust as Just Cause 3 but Avalanche being more focused on the grappling hook is very much welcome. 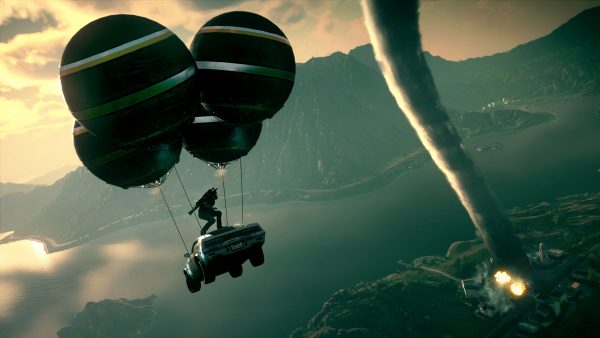 Rico also gets a jetpack and missile launcher, similar to the one from a Just Cause 3 DLC. Both can be upgraded by completing various tasks scattered throughout the island, though these upgrades are nowhere near as eclectic as the grappling hook’s. Still, the addition of the jetpack tremendously changes the game, giving Rico much more maneuverability in the air. It’s just so satisfying to cruise around an enemy base and strafe it with unlimited missiles.

It’s great that Rico has these awesome traversal options now as the vehicles still control like crap. Cars either feel too sluggish or too slippery, making them a chore in missions. Aerial vehicles are much better but they’re not readily available until you have access to airdrops. It’s weird that Avalanche tweaked everything else about the game but left the vehicle handling as bad as it is. Luckily, the pew pew bits make up for the vehicular shortcomings.

Gunplay actually feels great in Just Cause 4, which is something the series has lacked. The guns finally feel weighty and deadly, and nearly every single one of them has an alternate firing mode. Some are basic, like launching grenades, but a few are truly fun. There’s a heavy machine gun that transforms into a manned turret and an assault rifle with homing bullets, but all pale in comparison to the glorious Cow Gun. Yes, it turns people into cows. 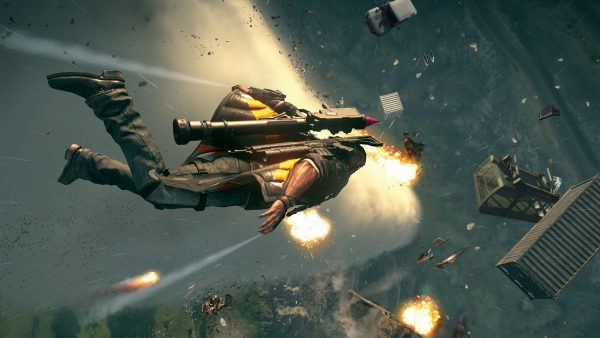 But as fun as Just Cause 4 is, there’s always this niggling feeling scratching away at the back of my mind — that all this feels terrible familiar. There’s really not much different from Just Cause 3, and if you want to nitpick then optional side events, like the chop shops ones, are completely missing in action. Despite the new locations and extreme weather gimmick, it doesn’t feel like a brand new game.

Then there is the disappointingly dumb AI. Enemies will stand in the open and fire at you or just run up to you to get blasted, while your allies also suffer from similarly dumb moments. Pathfinding can be a major issue sometimes, making escort missions particularly frustrating as you watch them charge heedlessly into heavy enemy fire to reach the objective. I know you’re supposed to escort the guy but come on! Is it too much to ask for the AI to look before it leaps?

Speaking of looks, Just Cause 4 has plenty of object, texture, and shadow pop-in. No matter if you’re flying high up in the air (which is when it gets really bad) or driving down on the ground, that pop-in is inescapable. Shrubs, trees, and other ancillary objects will suddenly appear as you move, and the scenery is constantly flickering as shadows are rendered in. At least there’s an upside to all this: there’s not a ton of noticeable slowdown in the action. 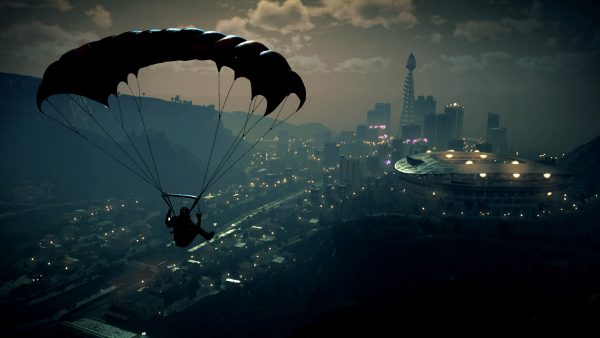 If you’ve played Just Cause 3 then a smoother framerate was probably your most wanted request. There’s still a bit of stuttering here and there but it doesn’t impact gameplay too much. Plus, the explosions look much better this time around, with a cool bloom effect and tons of particles flying everywhere. It’s almost impressive enough to cover up the horrendous pop-in issues.

Those explosions sound good too, with a nice throaty rumble to them while guns, especially shotguns, sound magnificently deadly. My favorite part of of the game’s audio has to be the radio stations, as there are tons of Spanish music from nearly every genre. There are some awesome gems in there, but it’s just sad that you can’t listen to them when not in a vehicle — Rico really needs to invest in some wireless headphones.

However, what probably was’t a major request are the character design changes. I don’t know why but somebody at Avalanche apparently decided that Tom Sheldon needed a makeover, and the changes are so much more drastic than the last time that he looks like a completely new man. Even Rico looks different, though at least he’s still recognizable .

More a clunky expansion than a full-fledged sequel 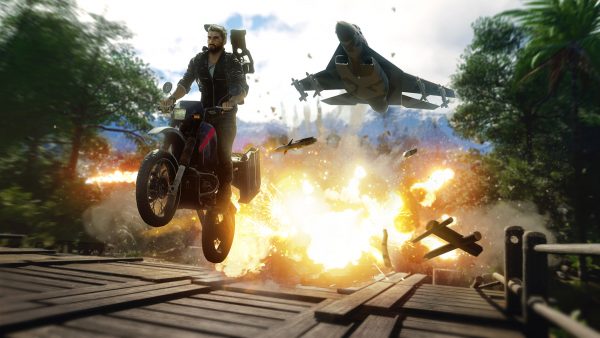 I’m a tad disappointed with Just Cause 4. I expected an experience that built upon Just Cause 3 and its DLCs, yet what I got instead feels more like an expansion. The new toys and weather effects are nice but it all just feels a bit too familiar. Still, I’m cautiously optimistic and hoping that future content will flesh out the game more, just like what happened with Just Cause 3.

It’s a bit clunky and could use some more tweaking, but Just Cause 4 is a pretty above average experience to fill in the gap between other AAA titles. But if you’re new to the series then consider picking this up, because it will feel like a refreshing breath of hot, explosive air compared to most open-world games.

Just Cause 4 is out now for PC, PlayStation 4, and Xbox One.
Developed by Avalanche Studios. Published by Square Enix.
A copy was provided for review.

Sal's just your average hardcore gamer. He started gaming on the NES in the 80s and has been ever playing since. Sal doesn't care about which platforms games are on, only that he wants to play them all!
Previous post Lenovo announces Legion of Champions III Grand Finals
Next post Verdun developer M2H will plant 2,500 real-life trees to commemorate the Christmas Truce