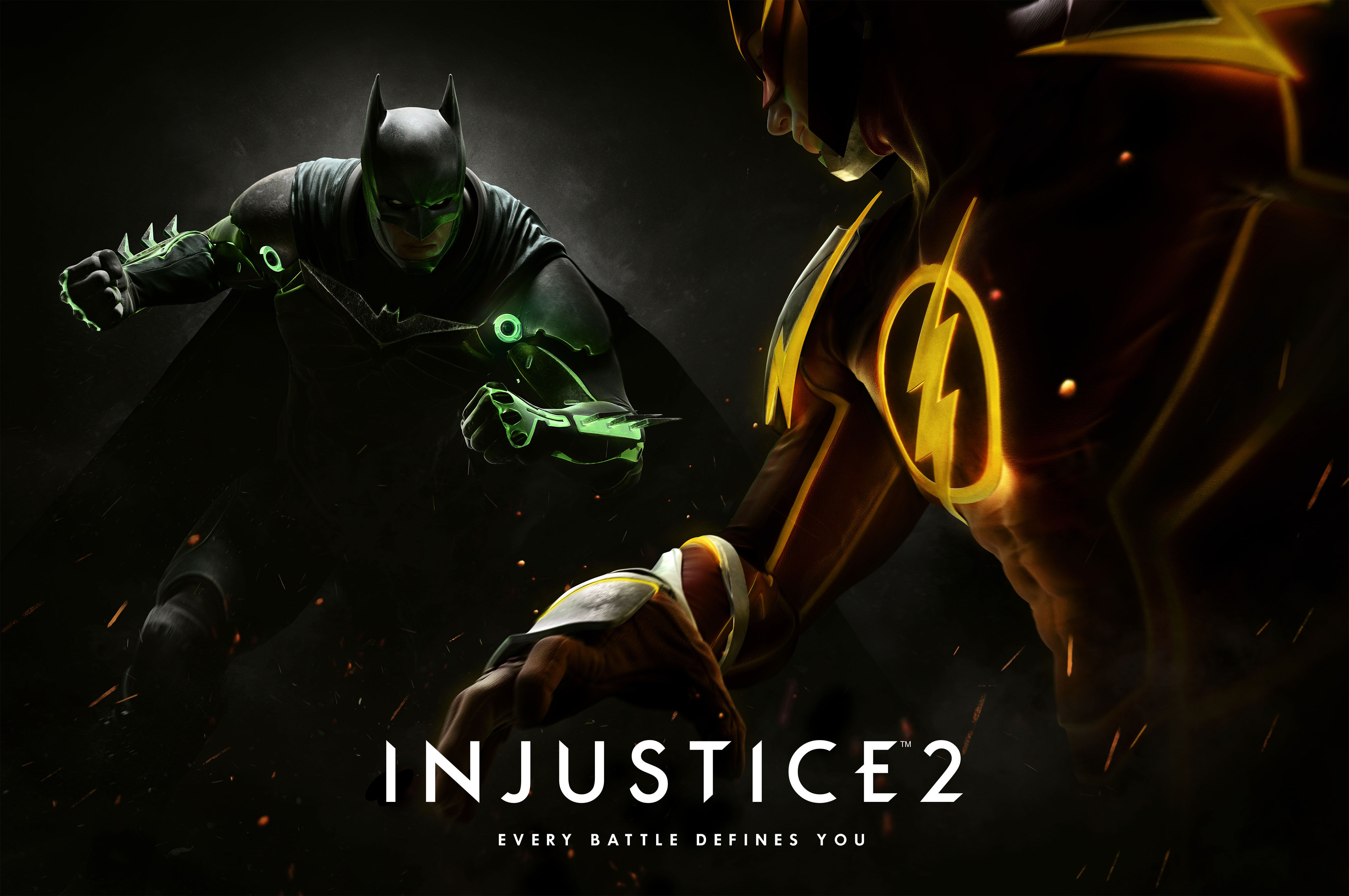 After the success of Mortal Kombat X, NetherRealm Studios turned their attentions back to the DC Comics roster with Injustice 2. Its predecessor had the benefit of being a surprise hit, wowing us with an original story that respects the source material, while also being a great, accessible game. The bar now raised, we went in expecting more fine work from the Warner Brothers subsidiary; what we didn’t expect was for them to set an all-new benchmark for a fighting game package.

Story-wise, I had some concerns that the sequel would leave newcomers scratching their head – after all, the first game is only available on last-generation consoles. This worry persisted for the game’s opening moments, which starts with the invasion of Krypton, fast-forwarding to the present, and then cutting to a different flashback. While returning players and DC fans would have little trouble picking up on what’s happening, all that jumping isn’t exactly friendly to someone wading in for the first time. Granted, Netherealm did a great job at providing context for the war between Batman and Superman, though an optional recap of events would have been appreciated.

As a casual fighting game player, the single-player mode took me just over five hours to complete on Medium difficulty. That may sound short but, in practice, the duration felt perfect. The story is succinct and action-packed, smoothly transitioning between combat and cutscene, yet it also knows when to give you a breather. The writing and dialogue for the characters are on-point, at least within the Injustice setting, and there’s a good balance between drama and humor. Honestly, thinking about it makes me want to replay it all again. And although this is unlikely, I’d love to see story-driven DLC missions featuring the side characters from either side – they’re just that good.

A huge reason for that is the staggering production work that went into them. Simply put, Injustice 2 is one hell of a looker. It’s a collection of amazing character modeling, facial animation, and texture work, so much so that some scenes could very well be in a CG live-action movie. If you have an HDR compatible set-up then this is one title not to miss. It all sounds the part too, thanks to the voice acting work and casting. Netherealms have certainly outdone themselves.

Given the brief length I won’t touch on the story further, though I will state that it’s a single, complete arc with an entertaining, if not predictable, ending. The game thrusts different characters into my hands at every chapter, on top of some decision-making that may lead to an alternate ending. The extra time spent in single-player won’t be wasted, however, since the characters and your profile do get to level up and unlock gear. More on that later.

For now, let’s get to the fighting. Again, I’ll have to stress that I come from a casual fighting game background, in the sense that I’ve played many but never specialized in any. Like any casual scrub, I turn to light button mashing when in a panic. If that sounds like you then boy have I got news: Injustice 2 is a blast to play.

It boils down to largely universal button inputs, easily triggered specials, and a returning Clash mechanic that spells the difference between a loss and a desperate comeback. I’m not implying dumbed down gameplay since there are plenty of online players who can hammer home the fact that skill matters (usually through a series of juggle combos) – it’s just easier to get your foot in the door and to start having fun. It’s not quite Naruto Ultimate Ninja levels of accessibility but it won’t leave you staring at fully charged meters and wondering what the hell to do.

A thorough tutorial covers all the necessities, showing the ropes to combat, abilities, and environmental interaction. I mentioned Clash earlier, which is only accessible when a character is down to their second health bar. When activated, both combatants get to wager their available ability bars meter, with whoever betting the highest wins. An attacker gets an offensive bonus while the defender — and this is the important bit – gets to regenerate a portion of their health. The exact percentage is proportional to the gap between the bids, both of which are consumed either way. It may get tiresome since you can’t skip the Clash cinematics but that’s probably a good sign you’ve been playing for too long, anyway. Because the ability bar is shared between skills, specials, Clashes, and escapes, it becomes a complex game of risk-reward management that’ll constantly leave you planning, predicting, or outright guessing.

The best part about it all is that Injustice 2 has plenty of solo content to chew through while one’s skills develop. There’s plenty to learn here, from the various character move sets to core concepts such as zoning, juggling, counters, and cancels. Rather than being in practice mode all the time, players can hop into the new Multiverse mode to tackle a series of challenges. Essentially, it pits you against alternately-skinned characters in a series of matches, with varying levels of difficulty, fighting conditions, and challenges. It’s a constantly updated list, each Multiverse destination tied to a countdown timer, some of which are longer than others. The proposition here is that it serves as an endless, dynamic extension of single-player, playable offline and sweetened by the allure of Gear and character-specific endings.

Gear is the other new addition to Injustice 2, providing equipment drops and unlocks to customize and augment the characters. These are readily acquired via regular play across the different modes, each item tied to a rarity level. From a cosmetic perspective, the Gear system is a wonderful alternative to predefined skins, allowing players to mix-and-match cowls, gauntlets, boots and more into multiple loadout slots. The other aspect to the Gear system lies in passive bonuses, such as a statistic or ability boosts. Predictably, the rarer the item, the better these upgrades are, as long as you meet the character level requirements. You’re free to disable these boosts in multiplayer matches for a fair playing field, leaving only the cosmetic changes.

It isn’t perfect — opening these mother boxes (a.k.a. loot boxes) are a huge pain, requiring manual button presses for each one; an annoyance further compounded by the long animations, snowballing into a huge time waster. The random drops also wind up feeling unsatisfying as they pull Gear from the entire pool of characters. That works fine in a loot box scenario where multiple items are on the table, lessening the sting of duplicates. Wouldn’t it be better to narrow the loot table, to reward a player’s continued use of certain characters?

Where multiplayer is concerned, things are similar to the first game. Latency wasn’t an issue most of the time; you’ll get to see an opponent’s ping before agreeing to a match but like most peer-to-peer games it’ll ultimately depend on the time and day that you play, subject to network spikes on either end.  While the overall online experience was positive, I see myself jumping into the Multiverse or a local multiplayer match far more often instead.

NetherRealm Studios went above and beyond with Injustice 2, packaging a highly competent and enjoyable fighting game with a spectacular single-player campaign. It makes the recent DC movies seem like a snooze-fest by comparison, bucking the long-held notion that video game adaptations are simply rushed cash-grabs. The Multiverse also grants the game plenty of added longevity for solo or offline play, making for an excellent launch title in terms of quality and value. If you’re looking to scratch that fighter itch then this certainly won’t disappoint.

Injustice 2 is developed by NetherRealm Studios and published by Warner Brothers Interactive Entertainment. The fighting game is out now for PlayStation 4 and Xbox One. A copy was provided for this review.

Ade thinks there's nothing quite like a good game and a snug headcrab. He grew up with HIDEO KOJIMA's Metal Gear Solid, lives for RPGs, and is waiting for light guns to make their comeback.
Previous post Computex 2017: Gigabyte unveils its X299 AORUS gaming motherboards
Next post This Aftershock PC and Secretlab Collaboration might be the deal you are looking for