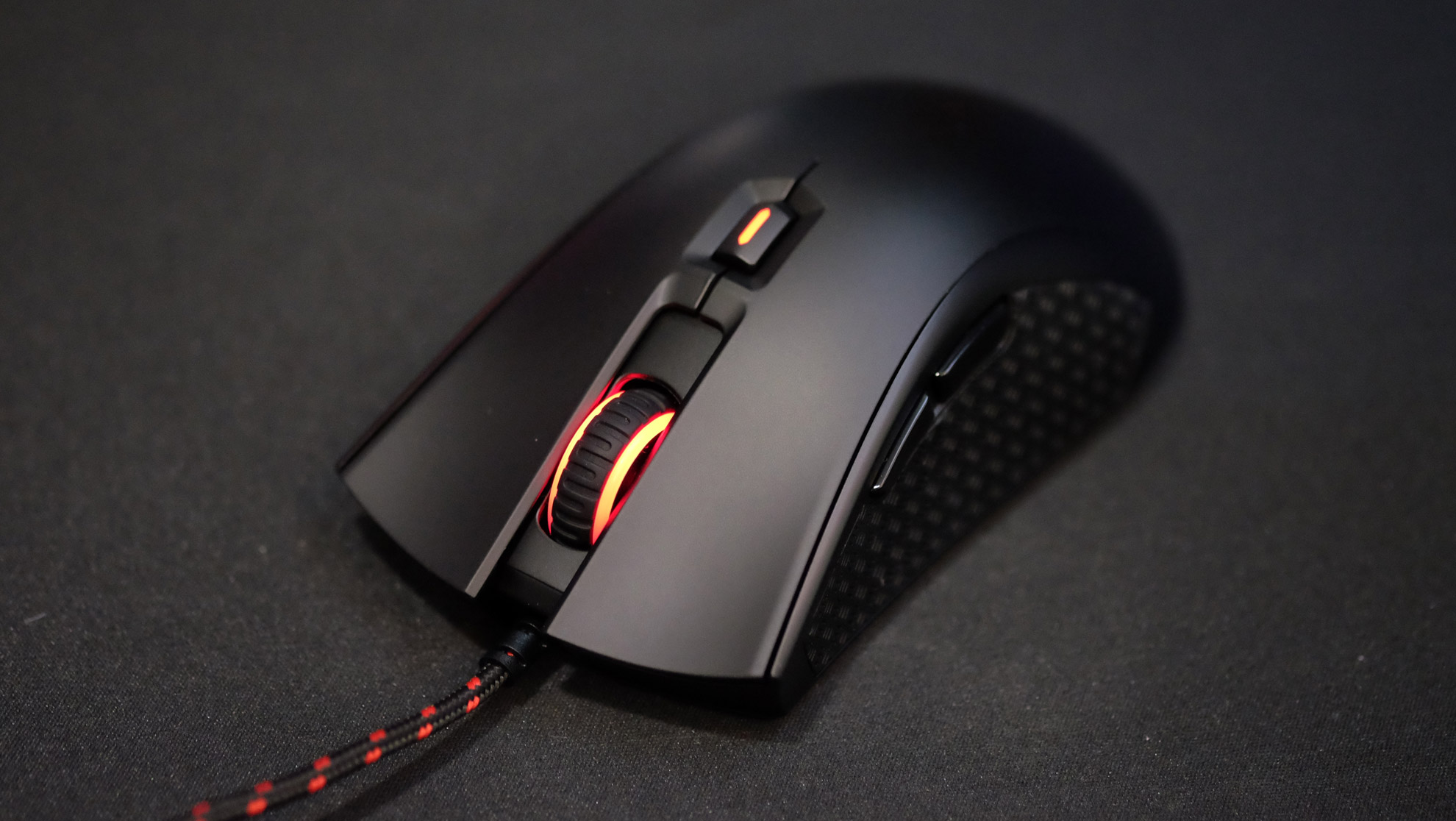 Kingston’s HyperX brand of gaming peripherals is growing. In addition to two new HyperX keyboards, the company now has its first ever gaming mouse in the HyperX Pulsefire FPS.

It shares the FPS moniker with the HyperX Alloy FPS, but there’s really no reason why either of them should be limited to just FPS gamers.

The Pulsefire mouse doesn’t feature hallmarks of an MMO gaming mouse like having a ton of side buttons, but you can definitely make it work if you’re looking for an affordable and capable mouse.

It costs just S$65, so it is quite an easy proposition to swallow. The Pulsefire FPS bears a striking resemblance to the Razer Deathadder, what with its high arch and contours that flare outwards.

Let’s get one thing out of the way first. The Pulsefire is a large mouse, and you’re really better looking out for a different mouse if you’ve got really small mitts. It measures 127.54 x 41.91 x 71.07mm, and feels a bit larger in the hand than the Deathadder, even though the two share very similar dimensions.

The good thing is that this is quite a light mouse for its size, weighing just 95g. This means that you’ll have an easier time navigating your mouse pad and staving off fatigue during long gaming sessions. We’ve used heavy mice like the 135g SteelSeries Rival 700 before, and trust us when we say that they are an absolute chore to get used to.

However, while HyperX claims that the mouse is suitable for both palm and claw grips, it’s really more comfortable for the former because of the high arch and its size. Your experience may differ, especially if you’ve larger hands, but the shape of the mouse is such that a palm grip feels more natural.

This is an ergonomic, right-handed mouse, and the inward curve where your thumb rests on the left edge is absent on the right. That said, we’d have preferred if the mouse had a symmetrical shape, because that would make it slightly narrower and easier to grip.

Despite its S$65 price tag, HyperX hasn’t skimped too much on build quality. Both sides are covered with a textured rubber grip that feels like it should stand up under long hours of use. It also helps resist the grime that can build up over time, so you won’t have to keep wiping the mouse down.

The two side buttons have a glossy plastic finish, but they offer a nice amount of travel and feedback. Similarly, the Omron mouse switches offer satisfying clicks and do not feel mushy. Overall, this is quite a well-built mouse that feels like a quality product.

There of course certain trade-offs at this price, and HyperX has opted for driver-less operation much like on the HyperX Alloy FPS mechanical keyboard. This allows for truly hassle-free plug-and-play use, but it also means almost no customization options in terms of lighting options, mouse sensitivity, and the remapping of buttons.

Both the scroll wheel and the HyperX logo on the mouse glow a fierce red, and there’s no way to change the color. The DPI button below the scroll wheel lets you select the sensitivity you want, but you’re limited to stages of 400, 800, 1,600, and 3,200DPI. The button’s illumination helpfully indicates the sensitivity, so you get white for 400DPI, red for 800DPI, blue for 1,600DPI, and finally yellow for 3,200DPI.

It helps that these sensitivity steps are among the most commonly used, but if it so happens that you’re regular setting isn’t here, you’ll have no choice but to pick one and adjust your in-game sensitivity accordingly.

The PixArt 3310 optical sensor on board is the same as that used in the excellent Zowie ZA-series mice, so tracking felt impeccable, with no perceivable acceleration or jitter. The PMW 3360 is the more technically capable sensor, but it’s really difficult to find fault with the 3310.

The finishing touches on the mouse include large generous feet on the bottom and a nice black and red braided cable that adds visual flair to the overall design and impression of the mouse.

Ultimately, the Pulsefire FPS is a decent pick, but only if you have larger hands. It packs a good sensor and robust build quality, but its size and shape aren’t for everyone. Still, if you like the Razer Deathadder, chances are you’ll be happy with what is sort of a cheaper and lighter take on a similar shape.

HyperX designed the mouse with just the essentials in mind, so you’ll need to make sure that you can make do without luxuries like RGB lighting or software adjustments before making the leap.

Squee delights in trash talking on Overwatch and sleeping till 5pm on weekends. Few other things matter, except perhaps the next episode of Game of Thrones.
Previous post Review – Play Accel World VS Sword Art Online (PS4) if you a fan of these anime
Next post Prepare to go Legendary in Pokémon Go