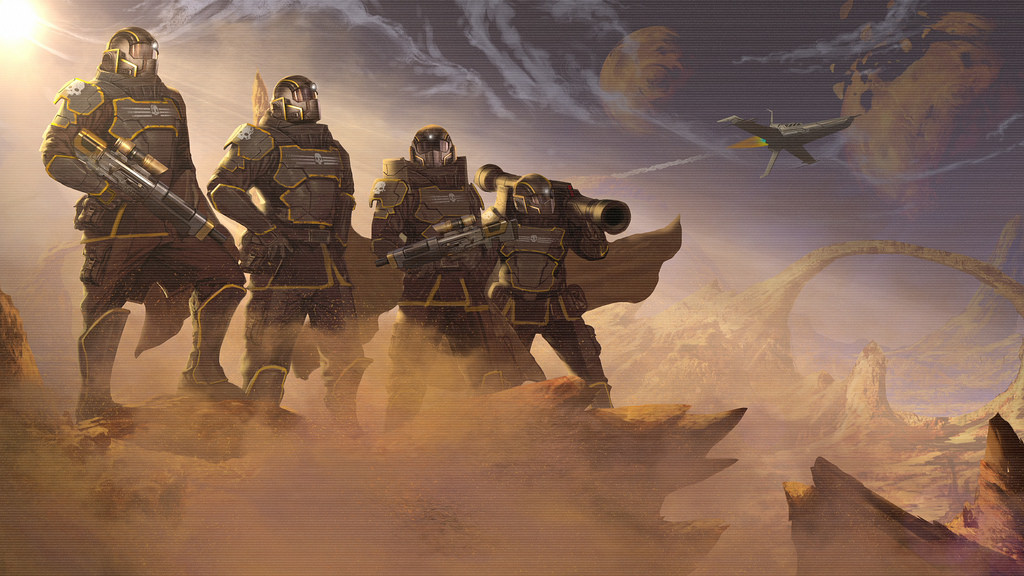 What do you get if you take a co-op shooter, mix in some RPG levelling, the over-the-top campy militaristic jingoism of Starship Troopers and removed friendly fire? You’d get Helldivers!

The Helldivers are tasked by the Super Earth military to spread ‘managed’ democracy throughout the galaxy. What it means is that they pretty much kill anybody in their way. You do that by participating in the galactic war. It’s a live hub that continuously updates, where you can see the fronts the Helldivers are fighting on. One goes against the bugs, one more against cyborgs and the last against the ‘Illuminate’. The bugs are pretty much bug-like aliens, like those you get from Starship Troopers. They are also the most fun to fight. The Cyborgs are like their namesake, Cyborgs that look like a cross between the Brotherhood of Nod (Command & Conquer) and the Cybran Nation (Supreme Commander). Their red and black color scheme only cements the similarities. The Illuminates are a race of ultra-advanced aliens that look a bit like machines (Protoss?)

The Galactic map is the base of every incursion into the war that is the crux of Helldivers. Super Earth fights on three fronts and the missions you complete in each front gets tallied up and added to the total score. If the game’s community completes enough missions, a sector of the front is considered won and more worlds open up. On the flipside, if the community fails the targets, the sector is lost and whoever is in charge of the sector makes it one step closer to Super Earth. The goal is to eliminate the home world of each of the three different races, which is easier said than done.

Once you’ve chosen a sector to fight in, you’ll warp into the sector’s system. Depending on your level, you’ll have access to a handful of planets. Each planet has its own difficulty, missions (though they are repeated throughout) and rewards for completion. All of the levels in Helldivers are randomly generated, which means although you might get the same planet as your friend, the terrain and objectives (and even the rewards) might be vastly different between the two of you.

As you complete missions, you gain experience, which not only increases your rank, but also the gears you have access to. The level system is a bit strict in that you only get experience from mission scores, while enemy kills don’t matter much. If there’s a downside to the game, it’s this. Since kills are irrelevant, you’ll be running away from enemies unless you’re forced to fight, which can make for boring gameplay. Thankfully, the array of unlocks you can get makes up for it. While you get guns for ranking up, you can get a boatload of different support options – ranging from railgun turrets to mech suits. You’ll want to keep on playing just to see what stuff you can get.

Helldivers’ reliance on the missions is a double edge sword. While random mission generation gives great replay value, the levels themselves aren’t interesting. There are only a handful of different mission options, which makes for a rather repetitive experience, even if the stages are different.

You can play Helldivers solo or with a group of up to four people. Solo play, while possible, is extremely discouraged as the number of enemies in later difficulties make it frustrating to complete objectives, especially ones that require you to capture points. Playing Helldivers in multiplayer is clearly what the game was designed for. Not only is it more fun, it’s also more chaotic as you not only have to worry about enemies, but your friends too. Since friendly fire is enabled by default, you always need to be on top of your game so that you don’t shoot friends in the back. Of course, unintentional friendly fire and accidental killings will happen and adds some cruel charms to Helldivers. I’ve personally tried to have a partner crushed by a dropship only to be squashed instead by his drop pod as it veered off course to avoid the dropship. It is moments like these that have you grinning ear to ear at how absurd the game can be.

While the game itself is fun, the lack of story and sense of progression can be a tad disappointing. There’s not much going for the game visually too. While the framerate remains constant no matter how chaotic it gets, the repetitive environments get boring fast. Although the game is procedurally generated, you can only play so many times on a planet with the same ice and snow textures before you go AWOL.

Those are small niggling issue though. No matter how you cut it, the game is one of the best shooters out on the PS4 right now. It might not be perfect but as a budget PSN title, it hits enough of the right notes to be a great value for money.

Aaron Yip is an industry veteran with more than 15 years of experience. When not spending time on his gaming PC and consoles, he can be found in Hyrule solving ungodly puzzles and collecting gems.
Previous post The Order: 1886 (PS4) Review
Next post Dragon Age: Inquisition DLC ‘Jaws of Hakkon’ Out Tomorrow