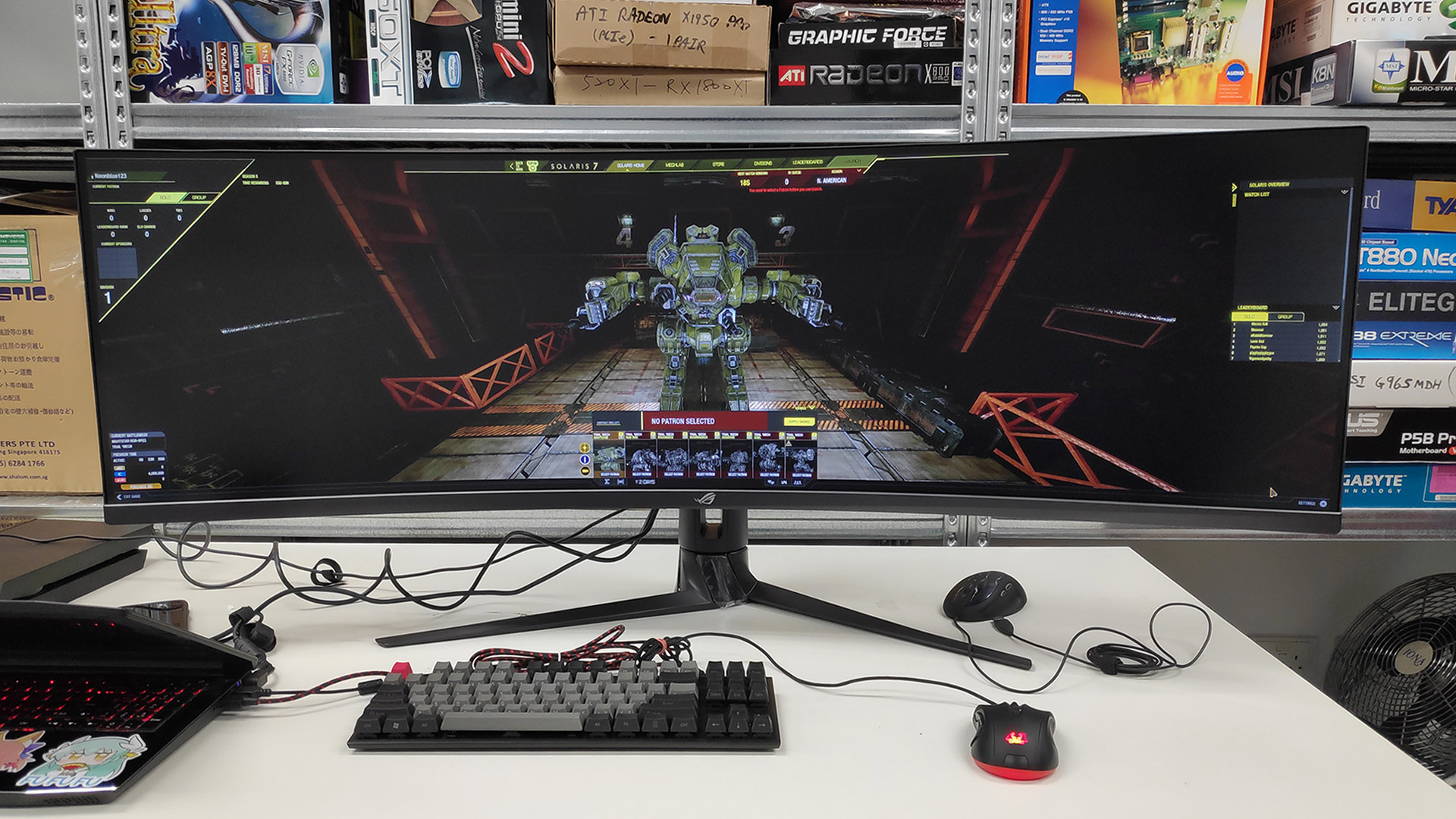 ASUS ROG are known to be indulgent at times, and nothing says ‘glorious’ quite like a monster 49-inch monitor. The ROG Strix XG49VQ, announced earlier this year, landed on our office desks with just as much statement as a UFO landing: with plenty of incredulity and awe. It packs an eye-poppingly wide 3840 x 1080 (32:9) resolution with all the bells and whistles of a gaming monitor, including a 144Hz refresh rate and HDR, for a good $1,639. Is it worth the splurge? Here’s what we think.

Ade Putra: This isn’t the first ultrawide monitor out there but it certainly is the first gaming model to reach our hands. We’ve seen the 49-inch barrier breached by brands such as LG and Samsung (no doubt thanks to their TV R&D) but this wide boy hails from a more gaming-minded house. ASUS ROG have built a solid reputation for their gaming displays so I’m pretty excited at what we’re about to see.

BattleMech cockpits! Shooters! Multiple Excel sheets side-by-side! (Okay not so much that last one.) However, were there any compromises to get here, and just how practical would something this large be on a desk, anyway? 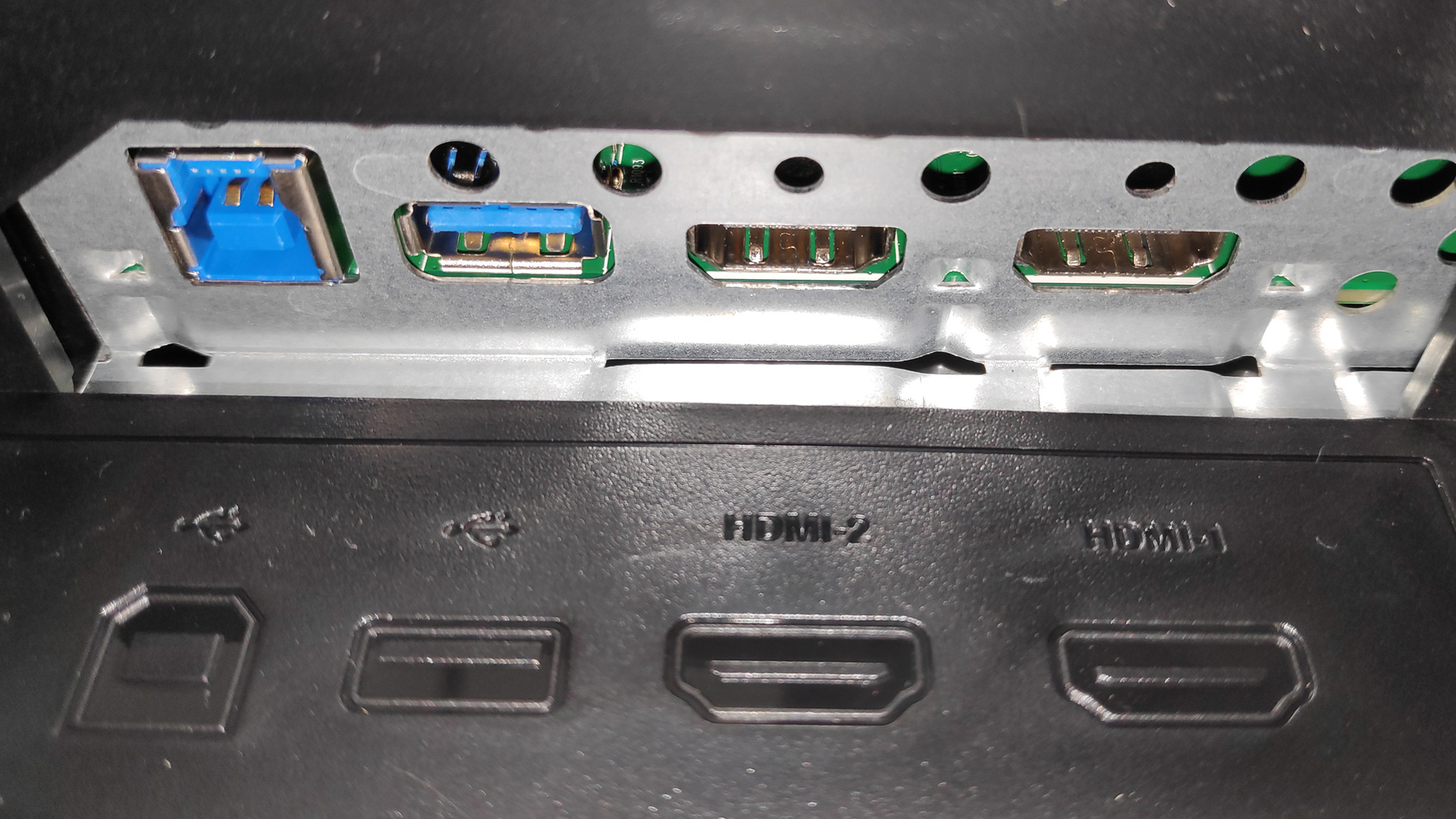 Kenneth Ang: Let’s face it. When you tell people you have a new gaming monitor, nobody bats an eye. At most they’ll ask what brand it is. But mention that it’s a 49-inch curved screen and suddenly it’s the coolest thing on the block. I had the same reaction — going from “Okay” to “I want one!” in a second.

Quite naturally, the first question that popped into my head was: “Which of my games would look great on that?” First-person shooters like Borderlands 2 were the main attraction, though Fate/Extella Link did cross my mind too. After all, having a wider field of view would mean much more immersive gameplay. I did take other genres into consideration, but I’m really keen on those two titles in particular.

Wei Song: It’s only natural to be blown away and excited when one finds they have a brand new 49-inch curved gaming monitor. However, the 32:9 image ratio did give me pause. I’m a practical person, so my first thought was: “Were there any games that can fully utilise it?” A close second was: “Do we have the desk real estate for it?”

That said, as with most curved monitors, I fully expect it to give me a more immersive experience in first-person games.

AP: Wow, can this be a pain to set-up. You’ll want plenty of room to extract this monitor from its box, and preferably a big clear table to piece it together. A second pair of hands wouldn’t hurt, either — it’s not heavy but you’d want to be a little more careful with a curved monitor. Assembly is tool-less and there are some snap-on plates to keep in mind. Get past that unboxing hurdle and… well, this monitor certainly is big.

Perhaps too big. I found myself moving back further than usual to account for this huge slab of light pummeling my eyes, immediately wondering how quickly eye fatigue would set in. The screen’s curvature is definitely noticeable but not unpleasantly so, and the images look sharp at their native 3840 x 1080. I think the biggest worry here would be desk space, as you’ll have to sacrifice quite a bit to its fully adjustable stand; I’d get an arm or wall-mount instead. 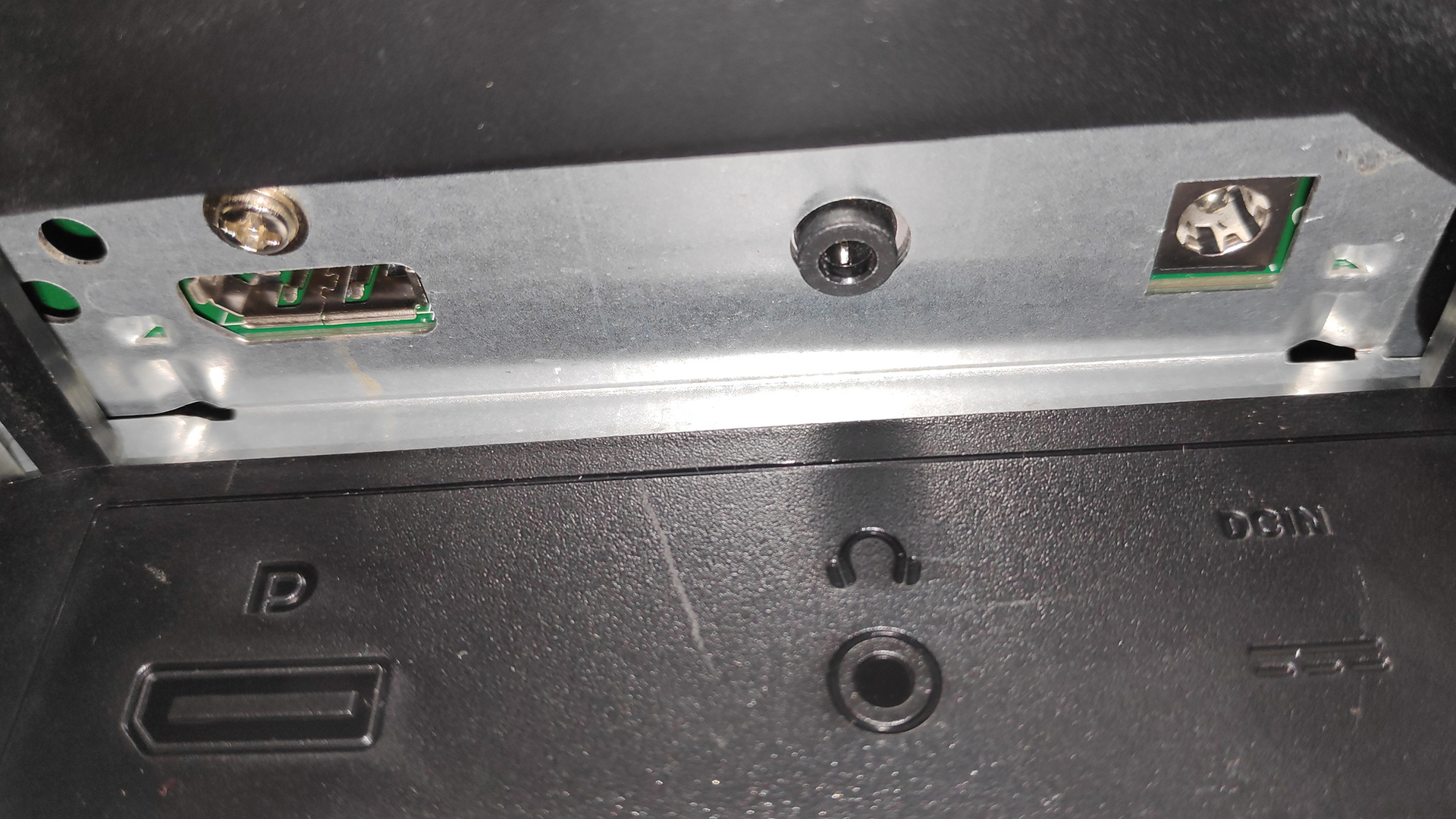 You also get DisplayPort and headphones on the rear.

KA: Well, I was expecting it to be a lot more… versatile, and that’s probably the most fitting word in my vocabulary. A 49-inch curved gaming monitor sounds impressive no matter how you slice it, but in reality it’s like the recent Game of Thrones finale: something that looks way better on paper and remains so.

For one thing, it’s not the easiest object to accommodate. It isn’t as heavy as it looks, but weight isn’t the primary concern when it comes to a monitor. Long story short, it’s like keeping a houseplant in your bedroom: it may look nice, but may not be the most practical option.

WS: If you’ve seen the Sakeru Gummy commercial that went viral last year, the ‘Long Long Man’ theme song was pretty much playing inside my head. It was as slick as I’ve come to expect from ROG monitors. It was also lighter than I expected, which was a pleasant surprise.

It did feel a bit excessive to me, however, and I had no idea where I should look when it first came on. Compared to a TV, I had to sit much closer to the monitor in this case.

AP: That 32:9 aspect ratio is going to temper some excitement. Blizzard’s Overwatch doesn’t support it, leaving us with black pillar boxing on either side. You can’t get around that by using the picture-by-picture (PbP) mode to fill in the space with a map layout or a separate app, since PbP forcibly turns off HDR and lowers the refresh rate to 60Hz and below — fine for productivity work and relaxing jaunts like MMO grinding while watching a show, but not exactly ideal for competitive games. That’s going to be a reality for full-screen videos as well, and those black sections are likely going to put some people off. (You can run games in windowless mode if you really want to multitask.)

Games that work great on multi-monitor setups unsurprisingly perform better on the ROG Strix XG49VQ. Images were sharp and those HDR colors popped, with frame rates generally smooth unless the PC itself struggled. There’s less monitor variation to worry about (color, brightness and so on) and, critically, no borders breaking up the image. We’re blessed with a number of thin bezel monitors these days, but even those can’t hold a candle next to a seamless ultrawide. I joked about it but the screen real estate is going to be a godsend for productivity too, be it the mathematical or creative side of the coin. Whether you’re working with spreadsheets and reports or canvases and timelines, you’d be glad you made this investment and “opened up” your view. 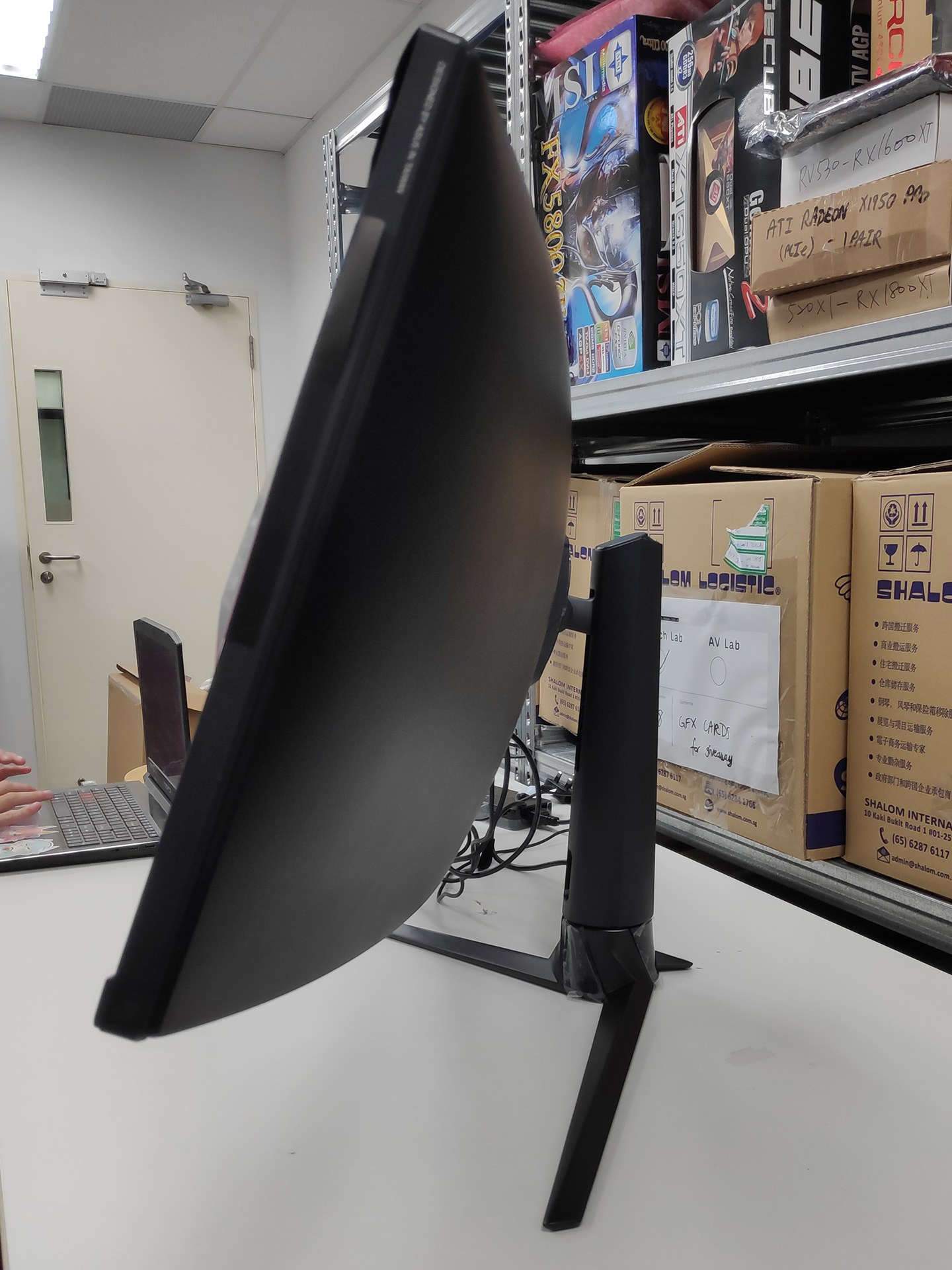 The stand is fully adjustable and very stable on the desk.

KA: I won’t deny that the monitor helps when you need to monitor multiple applications simultaneously. But that point is usually moot unless you’re a streamer or content creator. I’m not saying that it can’t be useful outside of that demographic, but it’s going to feel less satisfying than people might give it credit for.

Essentially, when the game does accommodate that impressive 32:9 aspect ratio, it is pretty good, but the experience isn’t really at that “drop everything to play” level.

WS: Not unexpectedly, most games can’t fully utilise the 32:9 aspect ratio. What this means is that you will often find yourself flanked by two black spaces when playing Overwatch, for example. It can be distracting, especially if you are spectating, and it feels like there is too much screen space going to waste.

When you do find a game that can play 32:9, that’s when things get real. Its curvature gave the games a nice touch of 3D by filling up the periphery. I’ll talk more about that in the next section.

AP: A PlayStation 4 and YouTube. I knew the monitor would be great with cockpit-view games but what I’d want in an ultrawide like this is versatility. If it’s going to take up the same amount of space as multiple monitors, it better do as good of a job. I managed to get PbP working after manually lowering the PC’s refresh rate, and then pinning the PS4 view (running Horizon Zero Dawn) to the right half of the monitor. That’s definitely more steps than just turning on or switching the input of a second monitor. 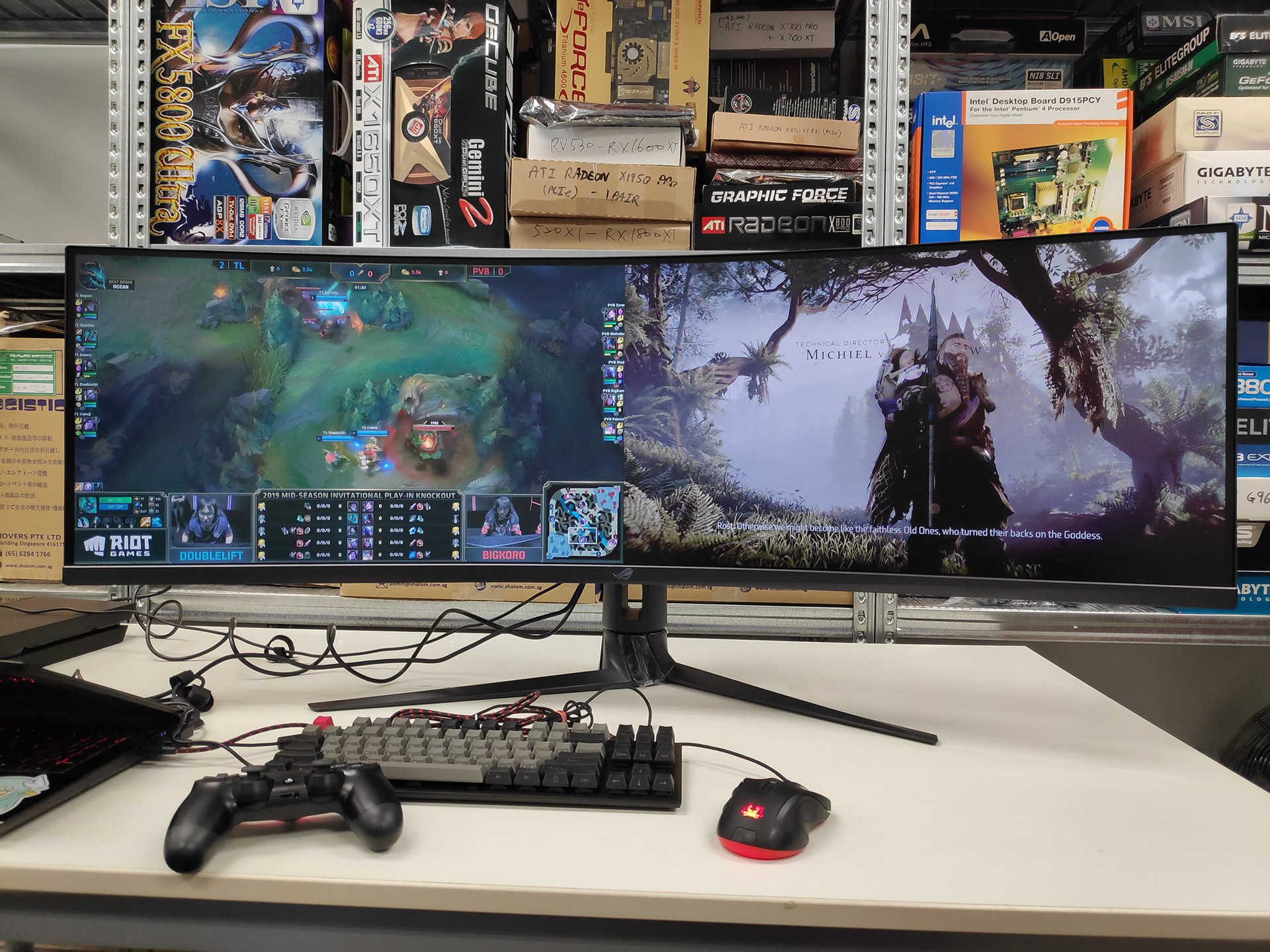 YouTube on the left, Horizon Zero Dawn on the right. 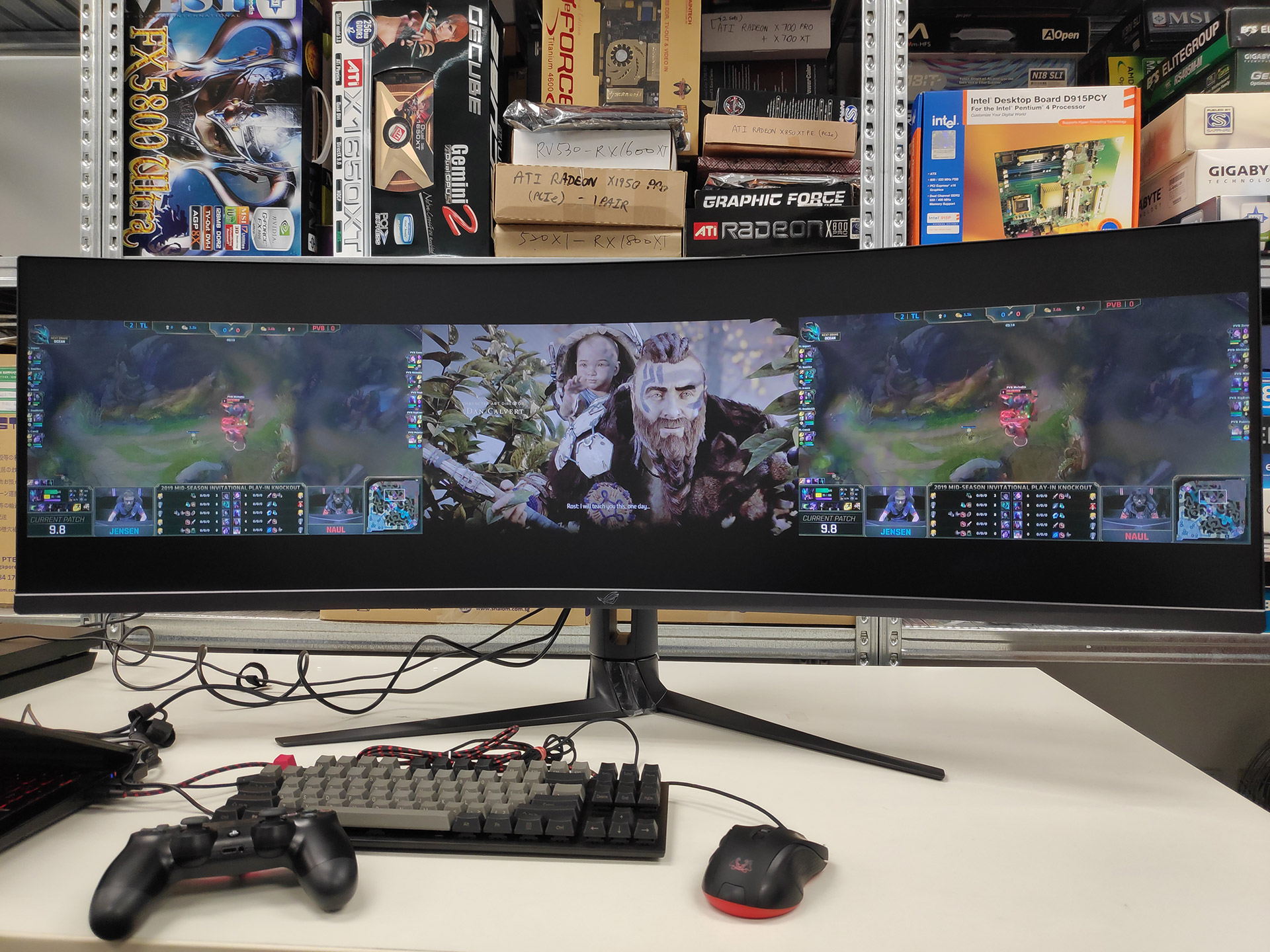 I quite liked the end result, though there is a caveat: aspect ratios need to be the same across the board for best results. So if the PS4 is running at 1080p, I’ll have to change my desktop view down from 3840 to 1920 pixels wide. The same goes for the third input if there’s one (I mirrored the PC source for the shot above). Otherwise, the ROG Strix XG49VQ performs remarkably when pegged to only one source. You’ll probably spend the first week or so wondering how to fill all that newfound space, but I’m sure you’d find it hard to go back after.

KA: Borderlands 2. Since the game recently received a graphics update, I figured the shooter would be able to support the 32:9 aspect ratio. And I was right. So, with baited breath and my heart pounding in excitement, I booted it up… and was left with a taste that could only be summarised as “decent”. 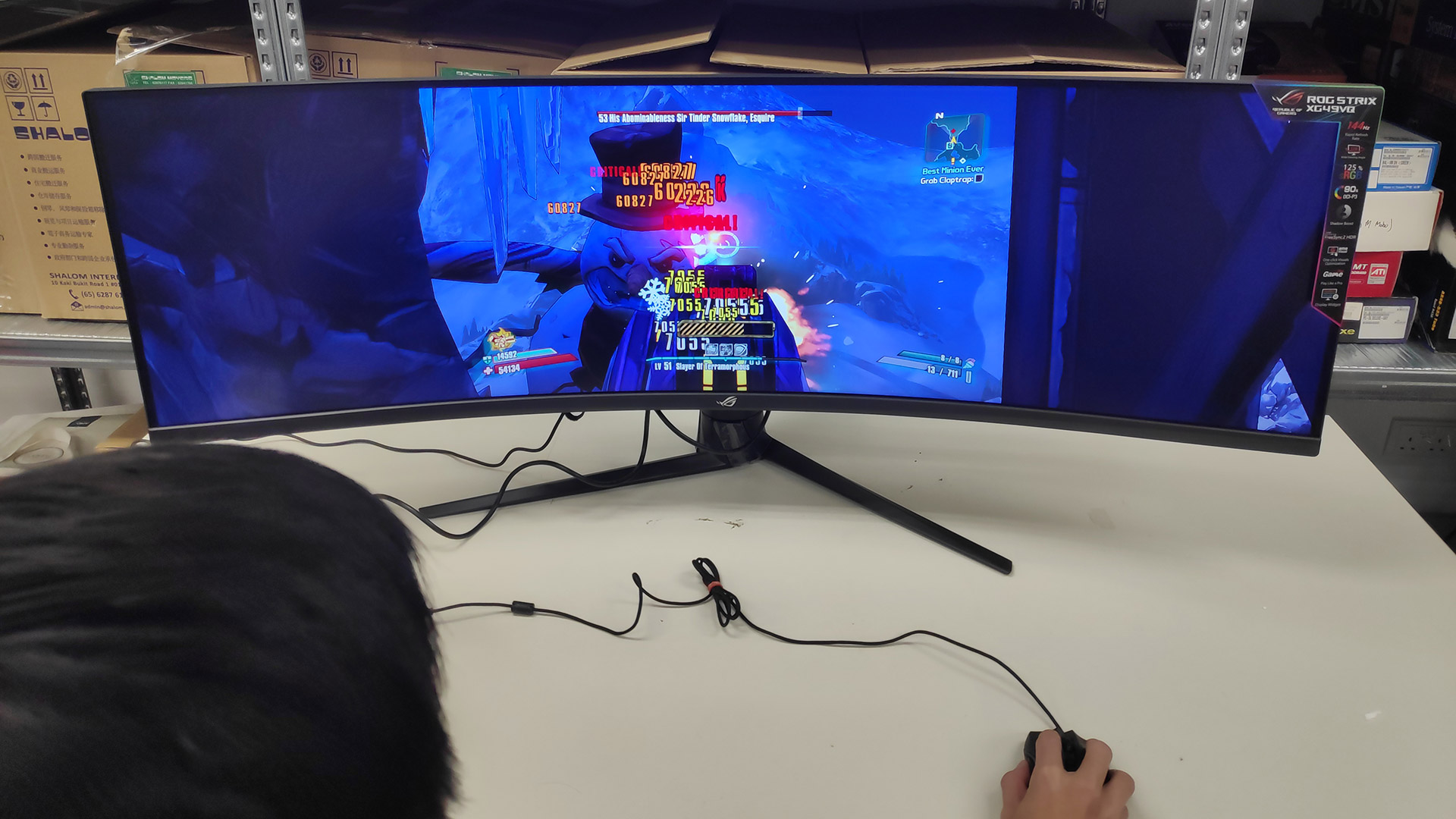 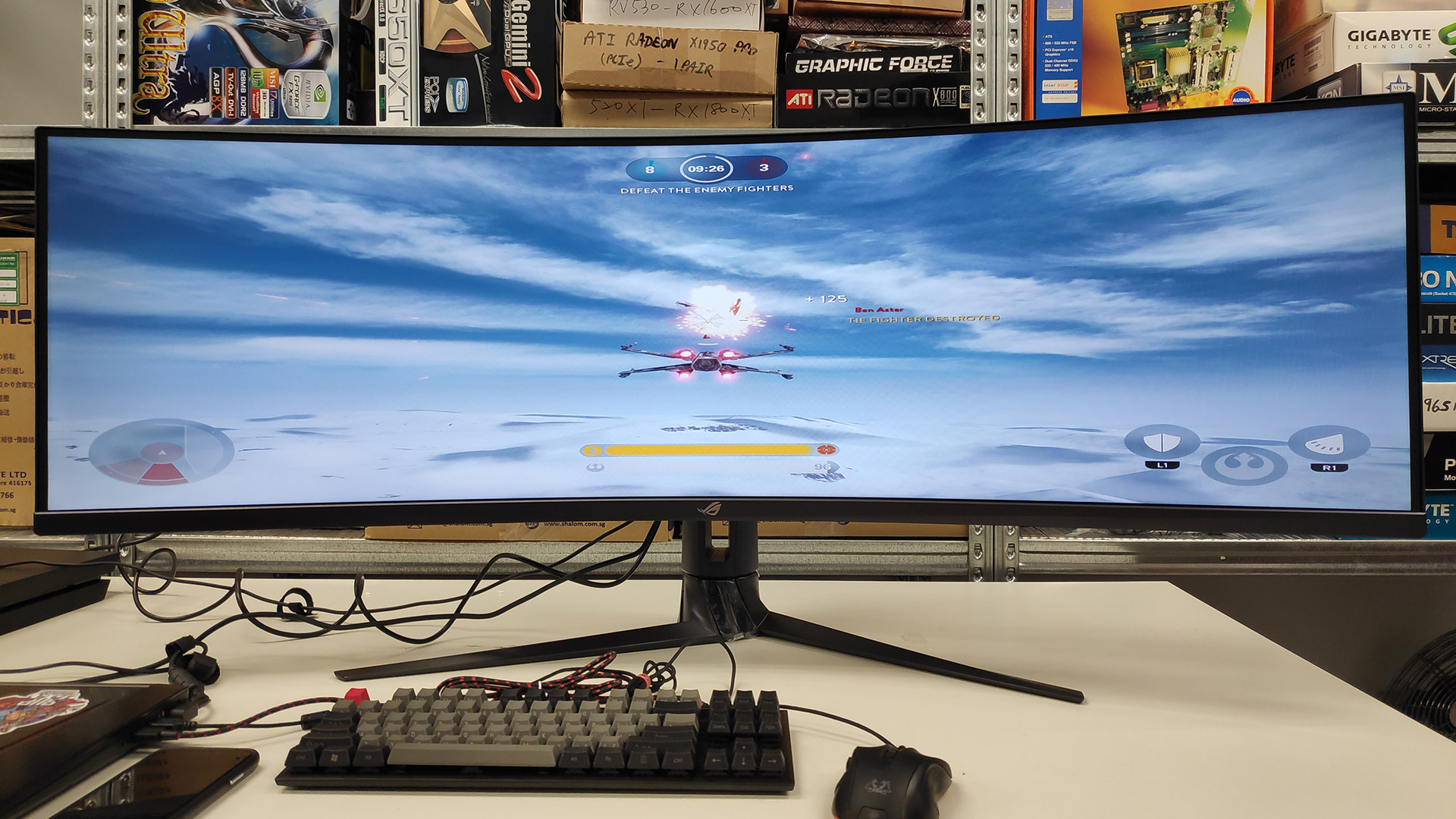 You can play in 4:3 or get a slightly stretched image like this.

Playing an FPS on the ROG Strix XG49VQ wasn’t exactly as awe-inspiring as I’d hoped it would be. The graphics weren’t stretched out or distorted, nor was the response bad, but the experience just felt… static. I had the same experience with Battlefront 2 on PS4, but this time the image was stretched a bit. To fix that, you can set the monitor to a 4:3 setting and have the black bars return.

WS: MechWarrior Online. The mech combat simulator was a great way to experience what this monitor had to offer, and the images were generally crisp and smooth. What’s great is that those first-person cockpit views naturally matched the curves of the screen, which makes the sim parts of the game even more immersive.

It’s been a while.

In-game screenshot showing off how wide 32:9 is.

That curved screen and wider field of view made it slightly easier to catch what’s going on in the periphery too. However, spotting small details might require a bit more neck movement, versus simply darting your eyes across the screen. Regardless, the ROG Strix XG49VQ was more impressive than what I had initially thought. It still feels a little excessive, and I think it’ll remain mostly as a niche product.

“The ASUS ROG Strix XG49VQ is a great push into 49-inch territory for gaming monitors, but it’s not going to be a purchase or upgrade on everybody’s wishlist. The limited availability of 32:9 compatible games and pillar boxing will turn away some buyers, though those who know what they’re getting into will be happy at what it can do.”

We are Team GameAxis. And we will play games for food.
Previous post Sony launches PlayStation Productions to adapt games for TV and film
Next post Secretlab are rolling out their 2020 Series gaming chairs!