Home / Breaking News / Review – Godzilla: King of the Monsters is an earth-shattering delight

Review – Godzilla: King of the Monsters is an earth-shattering delight 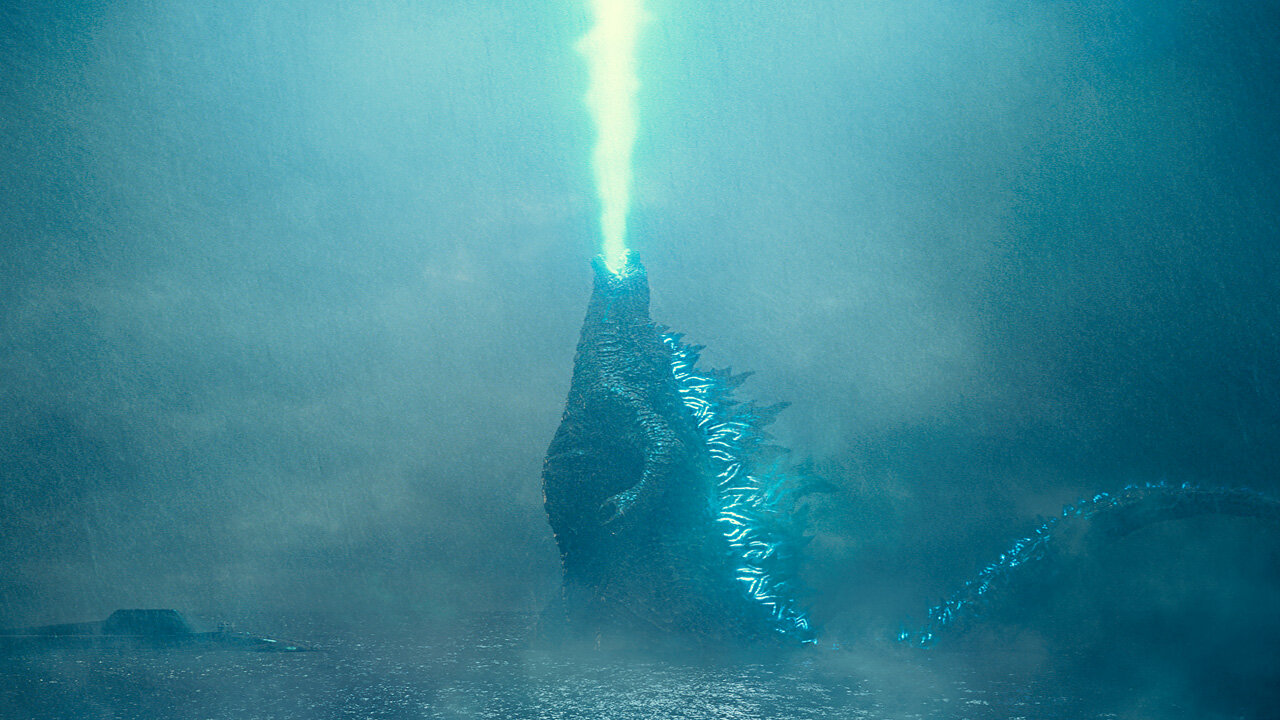 Godzilla: King of the Monsters was my most anticipated movie of the year. Sure, Avengers: Endgame promised the climax of the entire Marvel Cinematic Universe, which was a storyline 22 movies in the making. You know what it didn’t have, though? Godzilla.

We’re not even going to talk about Star Wars IX, It Chapter 2 or Toy Story 4. This is Godzilla — a high-stakes monster-vs-monster action extravaganza, with the King of the Monsters himself leading the battle. How could that not be at the top of my watch list? 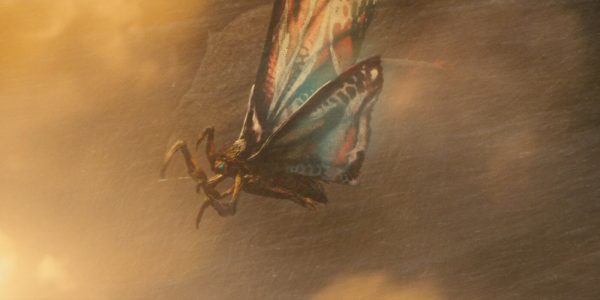 If it even needs saying, Godzilla: King of the Monsters isn’t a bad movie. It’s packed with more kaiju than you’d think wreaking absolute havoc in every turn. It has the fate of the world on the line, amazing creature designs and a decent plot to boot, which all make for a very entertaining watch. Unfortunately, the movie seems way more invested in making us care for the humans than the monsters, which is by far its worst flaw.

King of the Monsters follows Monarch, an agency dedicated to the study of kaijus. They’ve come under heavy fire after San Francisco’s destruction in Godzilla (2014), but now they’re suddenly thrust in the middle of an all-out war between the god-sized monsters: Godzilla, King Ghidorah, Rodan and Mothra. 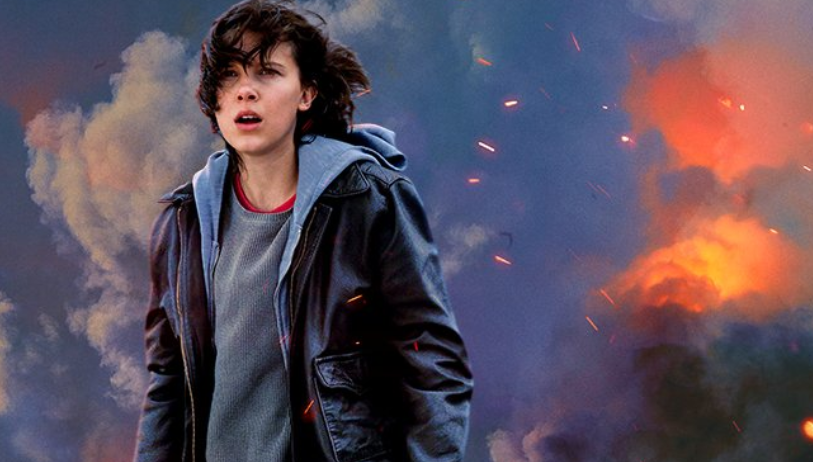 As a whole, the story is the best of the Monsterverse’s efforts thus far. It never hesitates to reference the classic Toho movies, even using some of the same plot points, and it’s clear that there is a lot of love for Godzilla’s long, colourful history. Surprisingly, the movie also manages to make the human characters interesting for once.

Actors such as Kyle Chandler, Charles Dance, Vera Farmiga and Millie Bobby Brown bring great star power to their roles. The writing can veer into annoyingly melodramatic territory at times, but these actors save those moments by sheer acting talent alone.

For example, I don’t think I’ve been as intrigued by a monster movie character than with Charles Dance’s Alan Jonah. He’s not given much to work with, but Dance manages to do a lot with his short screentime — and I’m not just saying that because I kept imagining Tywin Lannister escaping giant dragons in Westeros, only to find more giant dragons here. 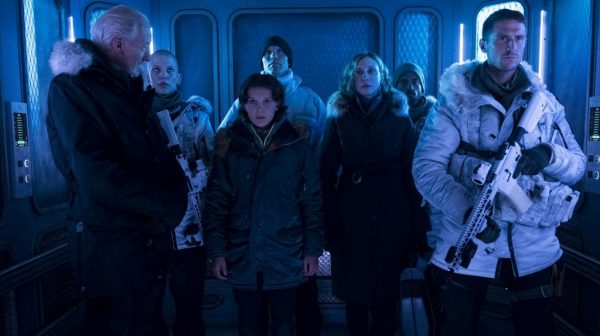 Chandler, Farmiga and Bobby Brown play a family long ago split by tragedy, but now coming together at the end of the world. It’s interesting enough and drives the movie through its slower points; however, it’s also what irks me the most about the movie.

So what’s bad about it?

Like I said, the excessive human focus. If you’re buying a ticket for this Godzilla show, bear in mind you’re also buying a ticket for a ‘humans-try-their-best-to-not-get-stomped-on’ show as well. Like the 2014 movie, most of King of the Monsters is spent on the people in it. It was a mistake then and it’s a mistake now.

Not that it’s a bad idea — this human element has been a series staple for more than 60 years. The problem is that it actually derails the plot at the worst of times. There’s also the fact that most viewers are probably going to a Godzilla movie to see the stars of the show tearing it up on the big screen. 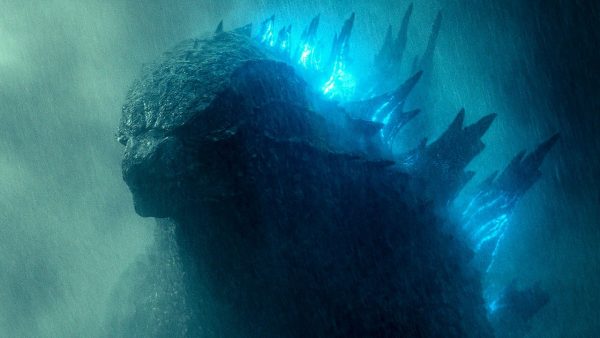 Did we really have to spend 80% of the time following Monarch and their hapless attempts at controlling a bad situation? I might be exaggerating a little, but it certainly felt that long.

When a kaiju awakens, I expect to see that monster wreaking havoc in all its glory. I want to see fighting in the streets as buildings crumble and collapse. Instead, I end up watching some humans struggling to stay alive way down below, or watching their reactions as something devastating (and cool) happens all around them.

This was such a common complaint for Godzilla (2014) that I thought they had learned better by now. Fortunately, what little bits of monster wrestling we do get to see are a sight to behold, and when I wasn’t being annoyed by all the drama it does turn out pretty interesting. 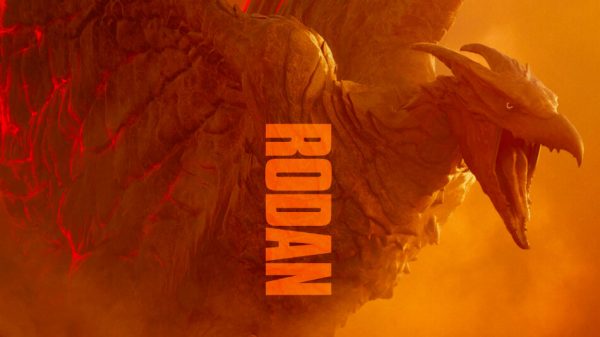 Visually, this King of the Monsters absolutely dazzles. It does a lot with its setpieces, often capping big, catastrophic action sequences with triumphant, wallpaper-worthy shots. Clearly, the production crew wanted to give these monsters an air of godliness and royalty, and they almost always pull it off here. 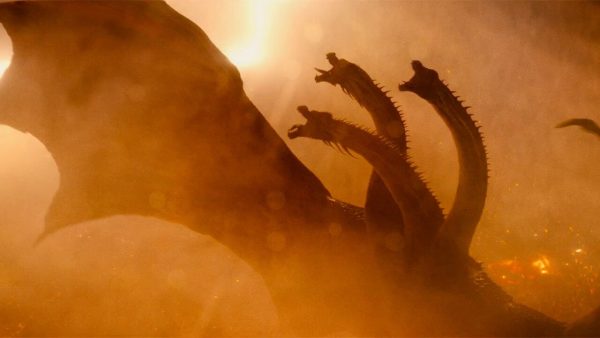 It’s a shame then, that the action doesn’t live up to the fantastic cinematography. Those big fights sometimes become  an unintelligible mess of shaky closeups and frantically paced action scenes, with Michael Bay-esque explosions and fast cuts that might leave audiences dizzy and confused.

The monsters themselves look pitch perfect in every way, though. Every moment Godzilla spends on screen reminds you why he deserves to be King. He’s huge, chunky and spiky, lighting up blue whenever he’s about to deliver his infamous atomic breath (which never gets old), and he absolutely dominates any scene he’s in. 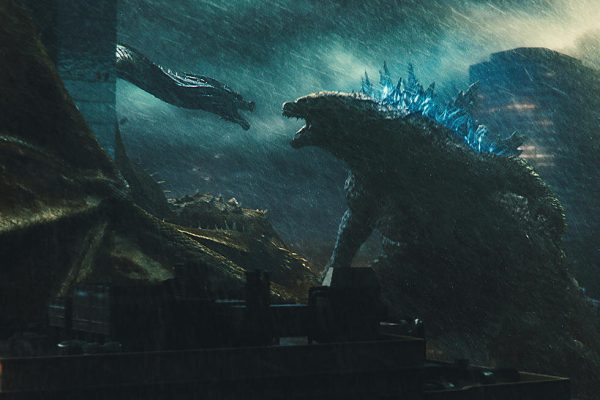 Of course, the only other monster to rival him is King Ghidorah, a fearsome three-headed dragon. It drips with venomous personality, reminding you of every villain you’ve ever loved to hate. Each head has a mind of its own too, and they tend to snap at each other in the midst of battle, which I thought was a really neat touch.

Rodan and Mothra don’t get much of the spotlight in this movie, but when they’re there, they’re fantastic. Rodan gets an entrance that stomps on everyone else’s, decimating an entire city during his awakening sequence alone. The ‘Fire Demon’ name couldn’t be more apt for this pterodactyl-like creature born out of lava.

Mothra is as beautiful and angelic as I always imagined her to be. Perhaps the only ‘morally good’ kaiju out of the lot, this giant moth/butterfly looks almost too pretty to do battle. When she does, however, it doesn’t disappoint. Mothra’s always been one of my favourite kaiju but, as a fan I think they could’ve used her much better than they did.

The sound design is incredible. Every roar, every explosion and every missile firing comes through loud and clear, even in the most chaotic sequences. The best example is the scene where the King of Monsters himself strides into battle: the whole cinema vibrated with each colossal footstep, almost as if the carnage was occurring right outside.

Bear McCreary (you know, from God of War) did such a fantastic job on the soundtrack that I just have to point it out as well. He brings the classic themes for Godzilla and Mothra to life in such a fantastic, fresh way. The soundtrack is loud and booming as well, a perfect accompaniment to the monster throwdown of the year. Seeing Godzilla go to town on another kaiju while his classic 1954 theme played gave me goosebumps every single time.

This is the definitive American-made kaiju movie by far. No other film, to my knowledge, has treated their monsters as deities like this one, and that tone really works here. Intense, catastrophic action, amazing monster designs, fantastic music and sound design, and decently written character drama make this movie one of the best Godzilla films of all time. In fact, it’s a strong contender for one of the best kaiju films of all time. 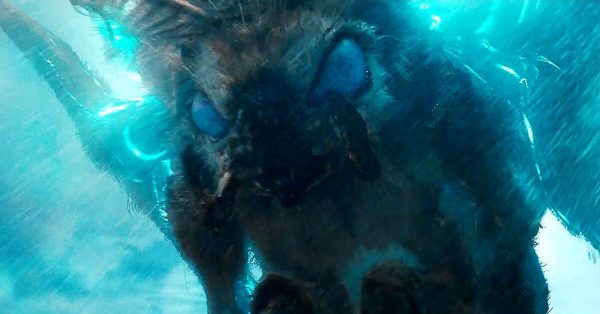 The only thing bringing it down is a lack of focus on what truly matters in Godzilla: King of the Monsters, and that is the monsters themselves. But I’ll admit that this does little to hinder the pure spectacle that the movie promises. After all, how often can you watch a giant lizard, a three-headed dragon, a huge moth and pterodactyl fight other in the cinema?

Now that the movie is out, the answer is: As often as you want to.