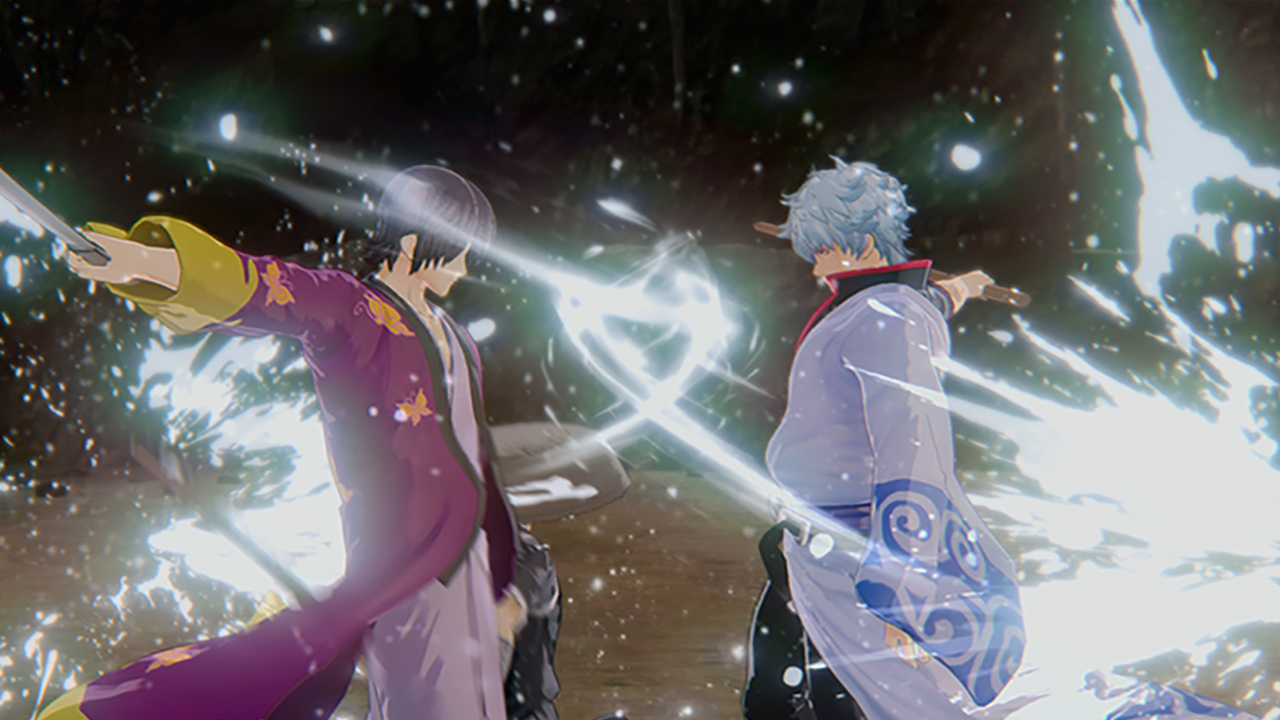 There’s no delicate way to put it but Gintama Rumble on PlayStation 4 is pretty much “Dynasty Warriors Gintama”. If imitation is the sincerest form of flattery, then Warriors­-creators Omega Force should be tickled pink at what Tamsoft Corporation have created. The gameplay and control scheme are so similar that any Warriors player can jump in blind and be good at it.

The only thing not the same is the game’s driving force. Gintama Rumble revolves around three loveable idiots from the anime: Gintoki, bum and killer swordsman; Shinpachi, the kid tagging along; and Kagura, an alien known for her incredible strength and fighting prowess. Together they run an odd jobs agency that gets caught up in all sorts of shenanigans, running around an alternate feudal Japan assimilated by extraterrestrials. And we mean aliens, not the West. Knowledge of the anime isn’t required since the game helpfully explains new characters when they appear, though a more comprehensive background, like the Warriors’ series library mode, would have been welcome. As it stands, only the major characters get some exposition, while secondary characters like Sadaharu (a giant alien dog) and Elizabeth (a giant alien… thing) are shafted. If you don’t know who or what they are, don’t count on the game to make any introductions.

Gintama Rumble begins with a Prologue set during the first-contact Amanto War (a parody of Japan’s forced open borders) and then continuing with the Benizakura arc onwards. Fans of the anime will notice that it skips most of Season 1’s early story, such as the embassy bombing and the Shinsengumi’s hunt, or the gang’s encounter with the Harusame pirates. With a total of ten arcs and one Side Stories chapter, the amount of content isn’t as much as you’d find in a Warriors game too.

However, despite sticking close to the anime there’s still something special missing. For a Warriors-style game, the stages are surprisingly cramped. Even the bigger ones are barely a quarter the size of a typical Warriors stage. Those small stages are reused a lot too, as seen in the Gintama Chronicles story mode. Since the game is separated into arc-defined chapters, you’ll be stuck playing the same stages over and over until you finally progress.

These stages reappear in the Free Battle mode, where the repetition feels stronger. Unlike the free-flowing battles of the Warriors games, these stages pretty much play the same way every time. Still, you’ll have to do it anyway as Free Battle is the only way to raise character levels beyond the story mode.

Higher levels not only unlock new skills, but also gives you Character Points to increase their health, Awakening gauge (dictates how long you can stay in the Awakening mode), attack, defense, movement speed, and Silver Orb slots.

Silver Orbs are modifiers that come with passive and active effects. You get them from beating area captains and from looting certain boxes. Their active effects range from healing to temporarily calling in backup characters like Sadaharu or Elizabeth, while passive effects may provide constant healing or an attack boost the closer you are to death. Silver Orbs come with three tiers of proficiency too, granting more power to their effects.

There’s not a lot of strategy involved in Gintama Rumble, so the orbs are a welcome addition. Do you opt for the Neo Armstrong Cannon orb with its attack enhancing passive, or just go for the Tsuu Terakado orb for constant healing? Finding out which orb you’ve found is also fun, unless you’re out farming for one that just won’t drop. You’ll get to carry up to three orbs once the slots are all unlocked, allowing you to experiment and find the best combination. Like Dynasty Warriors, the battles mainly come down to you bashing numerous similar-looking henchmen and -women to capture camps. Beat the captain protecting it and the area is yours. There are other objectives, such as escort missions, but for the most part you’ll be taking over camps.

While the gameplay is not that deep, the presentation is top-notch. The stylish combos and finishes are leaps and bounds ahead of what Omega Force has done in their games. Special moves and Awakening Finishes all look over the top, with bombastic special effects and copious cutscenes, making it look like an episode right out of the anime.

Unfortunately, Gintama Rumble takes a downward turn when it comes to the bosses; facing them is probably the worst part of the game. They don’t stagger when hit and deal massive damage no matter what you do. Dodging and blocking is hit or miss against them, too. It’s totally inconsistent with the laid-back difficulty of the rest of the game, making the boss fights feel tacked on and forced. Unless you’re specifically equipped for them, you’ll be breezing through a stage only to fall right at the end. It’s frustrating. On top of that, the cramped stages lead to packed corridors lined with enemies. They’re fun to hammer through, but it also shows how poor the game’s engine is at handling this genre. In short, massive amounts of characters will suddenly materialize before your very eyes. To be fair, this was an issue the Warriors games encountered too… back in the PS2 era. Seeing this type of technical difficulty is frankly unacceptable with the hardware these days, and especially considering the small stages it happens in. Luckily, the game does maintain a smooth frame rate most of the time.

Visually, the cutscenes in Gintama Rumble don’t hold up. Compared to the outlandish special moves and anime-like presentation, they’re dishearteningly bad. It reuses static images coupled with lines from the anime, which is not only jarring from the all the frenetic gameplay but also incredibly boring.

On top of that, the series’ opening and ending tunes are absent, leading to things feeling incomplete. After all, when the game goes all-out to portray the stages like the anime they’re from, wouldn’t it make sense to have the theme songs too? On the bright side, we do get the original Japanese voice actors.

Nitpicks aside, Gintama Rumble is a pretty decent Warriors-type game. The smaller stages and technical hiccups may detract somewhat from the experience, but the quality presentation and fun, if rather basic gameplay, more than make up for the shortcomings it has. It’s not enough to dethrone the champ, but if sales do well enough then perhaps we’ll one day see a bigger, fleshed-out sequel that can.

Gintama Rumble is out now for PlayStation 4.
Developed by Tamsoft Corporation. Published by Bandai Namco Entertainment.
A copy was provided for review.

Sal's just your average hardcore gamer. He started gaming on the NES in the 80s and has been ever playing since. Sal doesn't care about which platforms games are on, only that he wants to play them all!
Previous post SUTD Game Lab returns with a new puzzle game, now featuring their own campus
Next post New progression system and game mode on the way for Star Wars Battlefront II