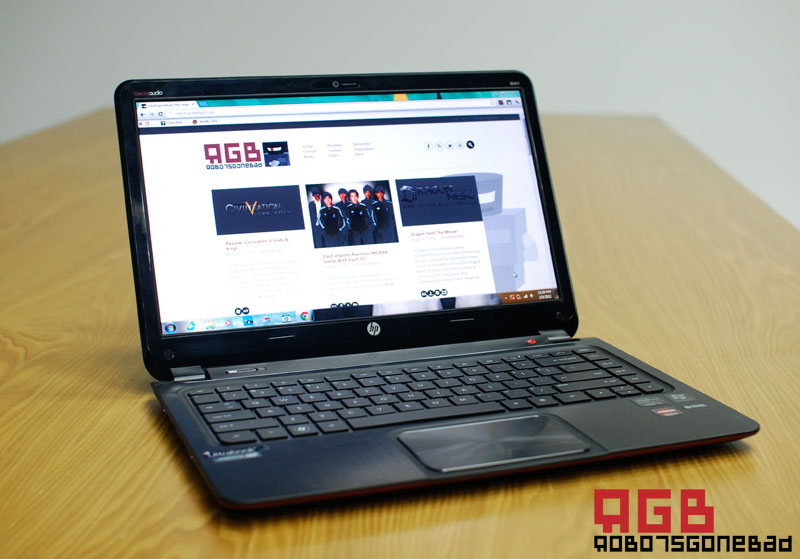 The HP Envy Ultrabook is a delicious piece of machinery that you want to tote about uncovered. Its brushed aluminium finishing gives it the touch of class most decently-priced notebooks don’t have, while the Beats-red trimming acts as the cherry on top. Its neat, chiclet-style keyboard sounds out with clipped precision whenever you type. The HP Envy4 Ultrabook is a dream to behold (at least for me, it does), but does its performance deserve its chassis?

The Envy4 is really more suited to multimedia playback. While it’s never going to be the notebook of choice for the discerning gamer, on paper, it seemed like it could stand up to some casual gaming. After all, gamers do have their downtime watching YouTube videos of boss kills and replays.

The Envy4-1035TX is the ultrabook in the ultra-thin Envy4 family, boasting more firepower compared to its relatively weaker (and more affordable) sister, the Envy4-1026TU Sleekbook. Apart from a discrete AMD graphics card, it also has 4GB more RAM, and a hybrid HDD with a SDD cache for its operating system: all this while not weighing the tiniest bit more than the Sleekbook. Fair enough then, we thought. It should be able to handle the commonest of games.

And so we put it to the test with the decade-old Warcraft III.

The glossy 1366 x 768 screen was the first drawback – playing in a lit room made visibility more distracting on the eyes than it should have been. It also could not run the game’s opening cinematic smoothly. This came as a surprise since Warcraft III is something even my grandmother’s 5-year old notebook could run. The laptop had its drivers updated, so we weren’t sure what the matter was. Regardless, we pressed on.

The Envy4 could run the game all right, but its keyboard fell flat. Though the chiclet keyboard had a nice, tactile feel to it, its function keys had their initial functions bound to sound, brightness, and the like. Great for multimedia playback, not so awesome for games. Function keys often double as shortcuts in most games. To get to the ‘F1’, ‘F2’ menu shortcuts in Warcraft III, we had to hold down the physical ‘fn’ key as well. You can imagine how that marred our gameplay experience, even though we tested the game on maps we could play with our eyes closed. The function keys often work otherwise in other laptops: holding down the ‘fn’ key activates the alternate shortcut, with ‘F1’, ‘F2’ and the like being the primary functions.

The Envy4 Ultrabook’s trackpad was also rather subpar. It is set at an angle, presumably for ergonomic purposes, but was not well fitted. The right and left mouse buttons did not seem to respond quick enough and made navigation difficult. I had to press down on it several times before it would work. It was, however, helpful that the trackpad had grooves cut into it to improve on traction.

In terms of visual and game engine performance, the Envy4 Ultrabook held its own. I tested several more light-performance games on it: Left4Dead, Portal, and Dota 2, all of which ran to our satisfaction.

Gaming on a full charge ran the Envy4 Ultrabook’s battery out at approximately three hours – which was quite acceptable considering how hard I was pushing the machine. Where most notebooks would heat up upon stress testing, I also noticed that the Ultrabook remained at an even, almost cool, temperature thanks to the HP CoolSense technology. The latter can automatically detect the temperature of your laptop and adjust the cooling mechanism accordingly

At just 1.8kg light, the Envy4 Ultrabook has great portability. It also boots up very quickly thanks to its additional SSD, where it houses the Windows OS. The 2cm thin Ultrabook also comes with two USB 3.0 ports and one USB 2.0 port, as well as a HDMI line out: perfect for plugging into your 40 inch flat screen TV. Take a look at the rest of the specs below:

In summary, the Envy4 Ultrabook is great for multimedia playback and for that occasional gaming. That’s not to say the Envy4 is a slouch at that, but for heavy duty gaming, there are more appropriate notebooks out there. With the Envy4, HP is targeting at a more mainstream lifestyle audience – the aspiring deejays, audiophile, movie fans. At S$1,299, the Envy4 is a pretty affordable option for those on the lookout for a non-Apple notebook too.