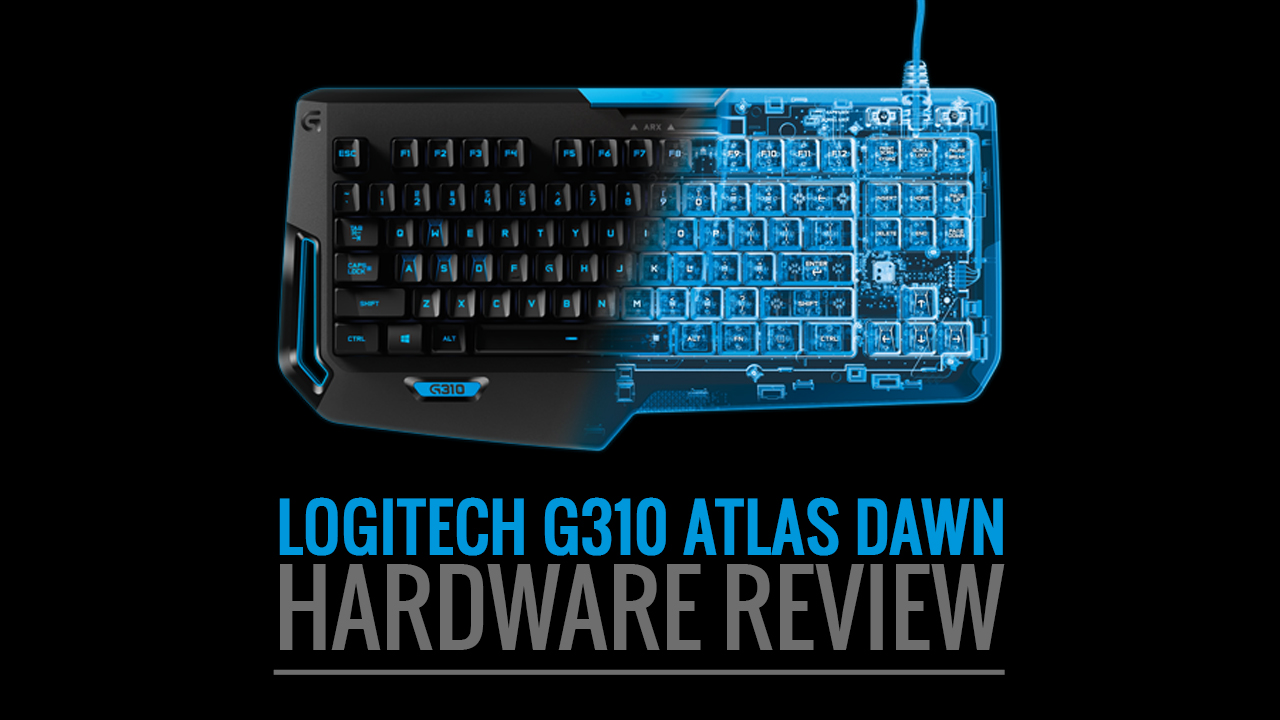 In 2014, Logitech’s G910 Orion Spark helped secure the company’s position in the cutthroat realm of mechanical keyboards. In that wake comes the G310 Atlas Dawn, a compact, tenkeyless version which strips away the macro keys, media controls, and extra functionality to focus on what really matters.

I’m not saying that the Orion Spark is fattened with trivialities, as many would appreciate the customization and quality-of-life features it offers. Rather, the two keyboards serve different needs: the Orion Spark aims to be a comprehensive presence rooted by a “battle station”, whereas the Atlas Dawn is a utilitarian companion that’s light on both your desk and back.

Measuring 41x21cm at its widest, the Atlas Dawn is roughly equivalent to a 15″ laptop — hardly the smallest keyboard around. Compared to its sibling, however, we’re looking at approximate reductions of 20% in size and 50% in weight, vital for those seeking portability. The absent number pad also means a greater surface area for a mouse, provided one can live with the sacrifice; after all, there still are games out there that make full use of those extra keys.

Logitech fully retains the loud design of the Orion Spark here, its sky blue accents, wrist rest, and concaved keycaps a proud showcase in gaming gear. If that didn’t convince then maybe the bright blue LEDs will. Despite their high intensity — which can be cycled down and set to pulse — the light never bleeds into one glowing mess. Each key and its character are sharply defined, making for a highly polished look best appreciated in person.

Unfortunately the fixed wrist rest, together with that pointless left-hand section, makes packing for travel much harder than is necessary. With most compact keyboards and their protective sleeves following a traditional, rectangular shape, the G310 undoubtedly stands out, and not in a good way.

On the other hand, those concaved keycaps aren’t as alien as I thought they’d be. Separated into facets of threes and twos on either half of the board, these serve as both a guide and finger rest. While it didn’t take long to grow familiar with the new shape, I’m not sure if many would find the tactile feedback useful.

More importantly, underneath those keycaps lie Logitech’s custom Romer-G switches. Unlike the famous Cherry MX brand, which can be traced back to the ’80s, the Romer-G was manufactured with purely gaming in mind. Thus, they’re lighter and boast a shorter actuation distance, which certainly seemed to be the case for me. They didn’t have the same heft we all associate with mechanical gaming keyboards, feeling more like a pleasant hybrid between a membrane and a mechanical setup.

The keyboard went through a videogame test gauntlet — Counter-Strike: Global Offensive, WildStar, Downwell, and Sora to name just a few — in addition to plenty of regular use (including this review). Expectedly the games went by swimmingly, each click providing a satisfying clack! with just the right amount of feedback. Rapid and repetitive key presses all registered, and I never had problems with key spacing or row height.

However, the re-arranged keys on the right ended up being quite the stumbling block where word editors and spreadsheets are concerned; those of us fond of the Home, End, or Delete keys will need some extra time coming to terms with the new layout. And I’ll be honest: I miss having a physical volume wheel.

In terms of extras the G310 sports a detachable Arx Control Dock, meant to prop up a smart device paired with the Logitech Gaming System software or supported games. It’s reminiscent of the older in-built screens Logitech had on their high-end gaming keyboards, but significantly more useful since your smartphone can just display something else — walkthroughs, Netflix, or whatever catches your fancy.

Strangely enough, for a compact keyboard it doesn’t have a detachable USB cable, and that makes me question its durability in the hands of a travelling gamer. It’s easy to imagine the cable under immense stress when shoved in a backpack or case while out and about, which shouldn’t even be a worry in the first place considering the price tag.

The Logitech G310 Atlas Dawn retails for S$179 on Logitech’s website (S$90 cheaper than the Orion Spark), placing it in direct competition with the Razer BlackWidow and Corsair K70. Anyone looking for a portable gaming keyboard, and doesn’t mind trading packing convenience for comfort and modern switches, would do well considering this as their next purchase.

Ade thinks there's nothing quite like a good game and a snug headcrab. He grew up with HIDEO KOJIMA's Metal Gear Solid, lives for RPGs, and is waiting for light guns to make their comeback.
Previous post Overwatch closed beta returns in February
Next post GameStart 2016 is a go! Convention returns in October