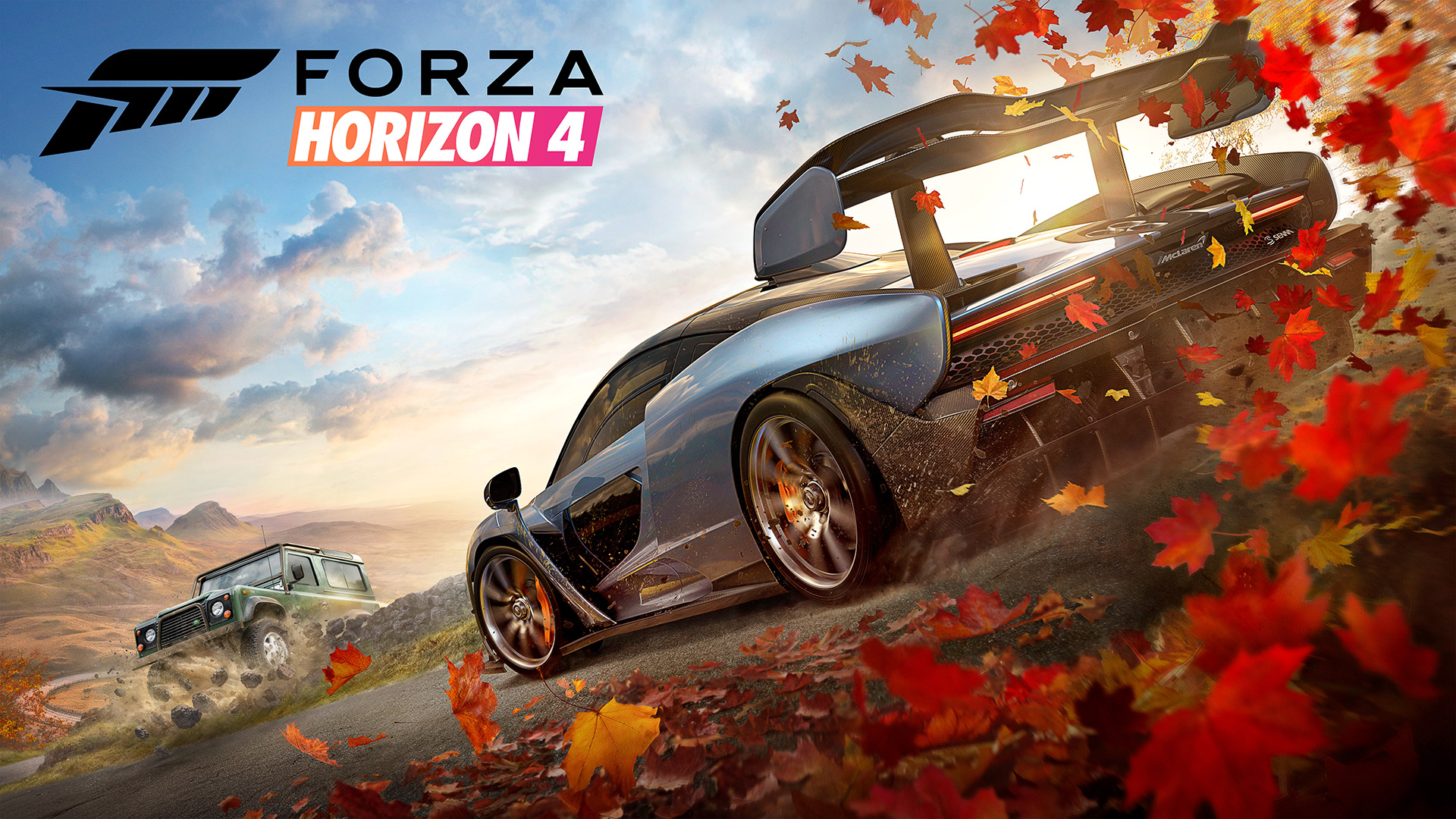 Something happened when I crested a hill near the Glenfinnan Viaduct and saw the wide-open fields of the Scottish Highlands: I fell in love with Forza Horizon 4.  I’ve never really cared for recent racing games but there’s something truly magical at play here.

It all starts with the updated leveling system. Fans know that Forza Horizon is good at providing play incentives, and now that’s been amped up to eleven. But there’s also a ton of race types and optional events to do while you freely roam the Scottish countryside, set near Edinburgh.

Make no mistake, Forza Horizon 4 isn’t a normal racer. It’s for those who like their racing unfiltered and dirty, and if it’s a track or circuit you’re after then you’re better off playing Forza Motorsport 7 instead (review here). Cross Country and Dirt Racing events are easy highlights. I’ll never get tired of power-sliding around muddy corners or scoring air time from massive jumps. It helps that you can easily correct mistakes via the Rewind function, so there’s no need to restart a race if you screw up.

That whole off-road experience stays fresh due to a new dynamic season feature. Leaves litter the ground in autumn while snow blankets the hills in winter, changing the countryside in look and feel. The server dictates the seasons in Free Roam but individual races can be customized via Blueprints, with any weather and season available to you.

Seasons offer something that, in the past, were only available via paid expansions like Storm Island and Blizzard Mountain. Now it’s like you get four different games in one, as vehicles handle very differently between seasons. I personally found autumn and winter the most fun to play around in, with all the mud and snow making off-roading especially awesome. If only The Outback’s desert made its way in too, but that’s wishful thinking. The huge number of races lessens the pain somewhat, offered in Solo, Co-Op, PVP, and Rivals modes. The first two matches players against ‘Drivatars’, while the remaining randomly matchmakes you against other opponents. PVP is based on event type, while Rivals goes by player skill level.

Incredibly, we even have simple ‘Story’ missions, such as one where you test drive supercars. However, Forza Horizon 4’s coup de grace are its Showcase Events, where you take on various machines on a straight-out, balls-to-the-wall race.

There are only a handful of Showcases but each one is in a league of its own. I raced a train, a hovercraft, and even a Delta Wing aircraft! There’s even a Halo Showcase, where you become Master Chief behind the wheel of a Warthog. Pelicans fly overhead, Banshees strafe the ground, and other Warthogs all join you in a race to the evacuation point. It’s the closest we’ve got to a full-on Halo racing game. 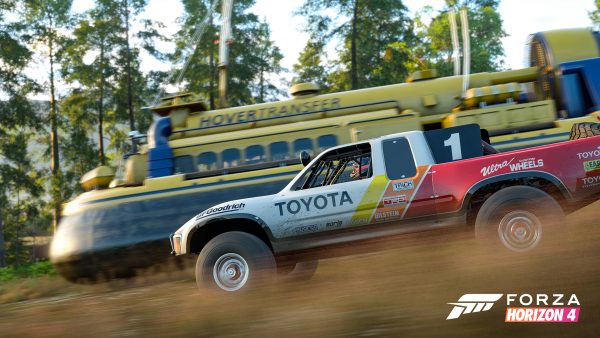 The new progression system puts the focus on fun. It doesn’t matter whether you win or lose races, because even coming in dead last gets you a little bit closer to your next next level, unlock, or car. Simply driving around gets you skill points, whether you’re drifting, drafting, or plain hitting fences. These go towards a meter that awards Car Mastery points when filled, used to unlock car-specific bonuses.

Then there are the event category levels. Except Showcases, everything in Forza Horizon 4 belongs to an event category. You get points for playing these too. Increasing a category level unlocks more events of that type, while raising an Influence level lets you have the best bonus of all: a Super Wheel spin.

Think ‘Wheel of Fortune’ with the prizes being cars, money, and customization options like clothes, shoes, exclusive horn sounds, and the like. There are two types: a regular Wheel Spin contains a single prize, but the Super Wheel Spin gives out three. While I love the idea of getting exclusive rewards via wheel spins, I hate that it’s the only way of getting customizable stuff. It’s infuriating to to not have cosmetics for your driver or, even worse, getting items that you’ll never use. I wish you could just spend the in-game credits on basic items at a shop, leaving the more exclusive prizes locked behind wheel spins. That would be the best of both worlds, rather than simply leaving it all to chance.

Fortunately, we have plenty of choice when it comes to vehicles. From concept cars and limited edition models to fictional rides like the Warthog; from TVR to Honda to Bugatti; whatever your preference, there’s a car with your name on it.

Most vehicles can be upgraded, turning even the lowliest option into a racing beast. I personally love the Dodge Viper ‘99 GTS ACR, my go-to ride in Gran Turismo and other games with it. While a great stock machine, upgrading it with an all-wheel drive makes it practically stick to the road, dirt or asphalt Gearheads can fine-tune nearly every single aspect of their ride to eke out that extra horsepower. Artists on the other hand can play around with decals to create custom looks. If past Forza titles are any clue then we can expect to see some gorgeous creations in the game’s auction house.

Of course, like the real world you’re going to need plenty of money. Trust me when I say you’ll be racing a whole lot just to afford some of the higher end cars, which can run into the millions — for those wondering, Halo’s Warthog costs 850,000 credits. But there are plenty of other cash sinks too.

For example, houses serve as fast travel checkpoints and some even come with bonuses. I heavily recommend saving up two million credits for the Fairlawn Manor as soon as possible, since it unlocks fast travel to any road in the game. It’s such a huge timesaver that I can’t stress how essential this is. When you’re not racing or tweaking, the majority of your time is spent in Horizon Life, the game’s Free Roam mode. They’ve brought back the collectible boards you can crash through for extra Influence, credits, and subsidized fast travel. Some of them are mini puzzles of sorts, placed up on rooftops, in alleys, and other hidden locations that call for some creative car jumps.  It’s fun to pick a direction and explore, though I wish the board’s detection radius was much larger.

Barn Finds are also back. These have you hunting a small area for an abandoned garage, your car prize waiting inside. There are 15 altogether but the lack of clues and prompts made the whole thing frustrating and repetitive. A hot-or-cold indicator would have made the pacing much better.

Horizon Life supports up to 72 players per instance. The highest I saw on the pre-release servers was 40, but even then the world seemed populated enough to regularly encounter other players. If you’re worried about others ruining your experience, don’t — there’s no collision detection between players so nobody can grief you. While you can play solo, a better alternative would be Team Adventure with up to 11 other friends. You essentially create a convoy of 12 to try out different multiplayer races, activities, and even games such as Infection. Most of these even contain exclusive rewards, which puts the lone wolves at a disadvantage — you’ll need at least one other player to enable Team Adventure.

Even if you play solo, I recommend staying online to take part in the Forzathon Live events. These invites all players on the server to a three-round event, each with a different objective. Completing these gets you points to buy stuff from the exclusive Forzathon shop. There are daily and weekly Forzathon challenges if you find yourself short on points, but you’ll probably clear them without even realizing it; I do wish there were more of them.

Incentives aside, Forzathon Live events are a blast to play. There’s nothing like a huge group of players coming together for a single purpose. Whether it’s drifting around corners, breaking speed trap records, or doing huge jumps, Forzathon Live bundles them all into one. Even moving from one event zone to the other is fun, as where else can you see a stampede of supercars going helter skelter in the countryside. Forza Horizon 4 is undoubtedly the most visually distinct entry in the series yet. Seasons gives the game a new look, and extra trappings like snow or mud enhances what is already a great looking game. It’s the little touches that impress the most.

I love how mud and dirt gradually builds up on the car, or how rocks and fences tumble away when you run into them. I love how you can almost feel the texture of the environment when you stop to take a look around.  I love how the rain falls, how the snow blows past in a blizzard, or how the leaves scatter as you cruise past. I love hearing the ‘tik tik tik’ of gravel as they hit the car’s undercarriage.

Driving in Forza Horizon 4 is an amazing experience, and you’ll get to share stunning moments through Photo Mode — the images almost look like the real thing. Sadly, while visual damage is pretty accurate, there’s no performance degradation or a chance for a complete wreck. 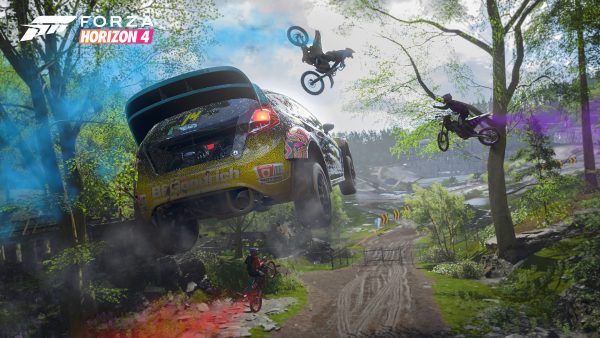 The Xbox One X can run Forza Horizon 4 at 60FPS, which is reason alone to get or upgrade your console. Those extra frames make a huge difference in gameplay, as the increased fluidity and sensitivity is key in a racing game! While Performance Mode does maintain a stable 60FPS, there is a downside. It’s mostly the game swapping in lower quality objects, textures, and even shadows right in front of you. There’s also some foliage pop-in or slow-loading textures when you approach them.

These are minor annoyances, since the performance trade-off is well worth the visual sacrifice. What’s not forgivable is the game’s weak soundtrack, as the included radio songs aren’t a great fit with the game. It’s telling when I’d rather listen to the classical station than any of the others.

Looking at the big picture, Forza Horizon 4 is undeniably the best open-world racer right now, somehow improving the great experiences that the past two games were. If you’re hankering for some thrills and spills, whether on the roads or off, then this is the game to get.

Forza Horizon 4 releases on 2 Oct 2018 for PC and Xbox One.
Developed by Playground Games and published by Microsoft Studios.
A pre-release code was provided for review.

Forza Horizon 4 (Xbox One)
was reviewed on the Samsung QLED Q7FN 65-inch TV. Sal's just your average hardcore gamer. He started gaming on the NES in the 80s and has been ever playing since. Sal doesn't care about which platforms games are on, only that he wants to play them all!
Previous post Team Singapore to compete in Hearthstone Global Games tonight
Next post Win an exclusive Lex Luther Minifig from LEGO DC Super-Villains!