Home / Breaking News / Review: Far Cry 5 is a solid entry that sticks too closely to its formula

Review: Far Cry 5 is a solid entry that sticks too closely to its formula 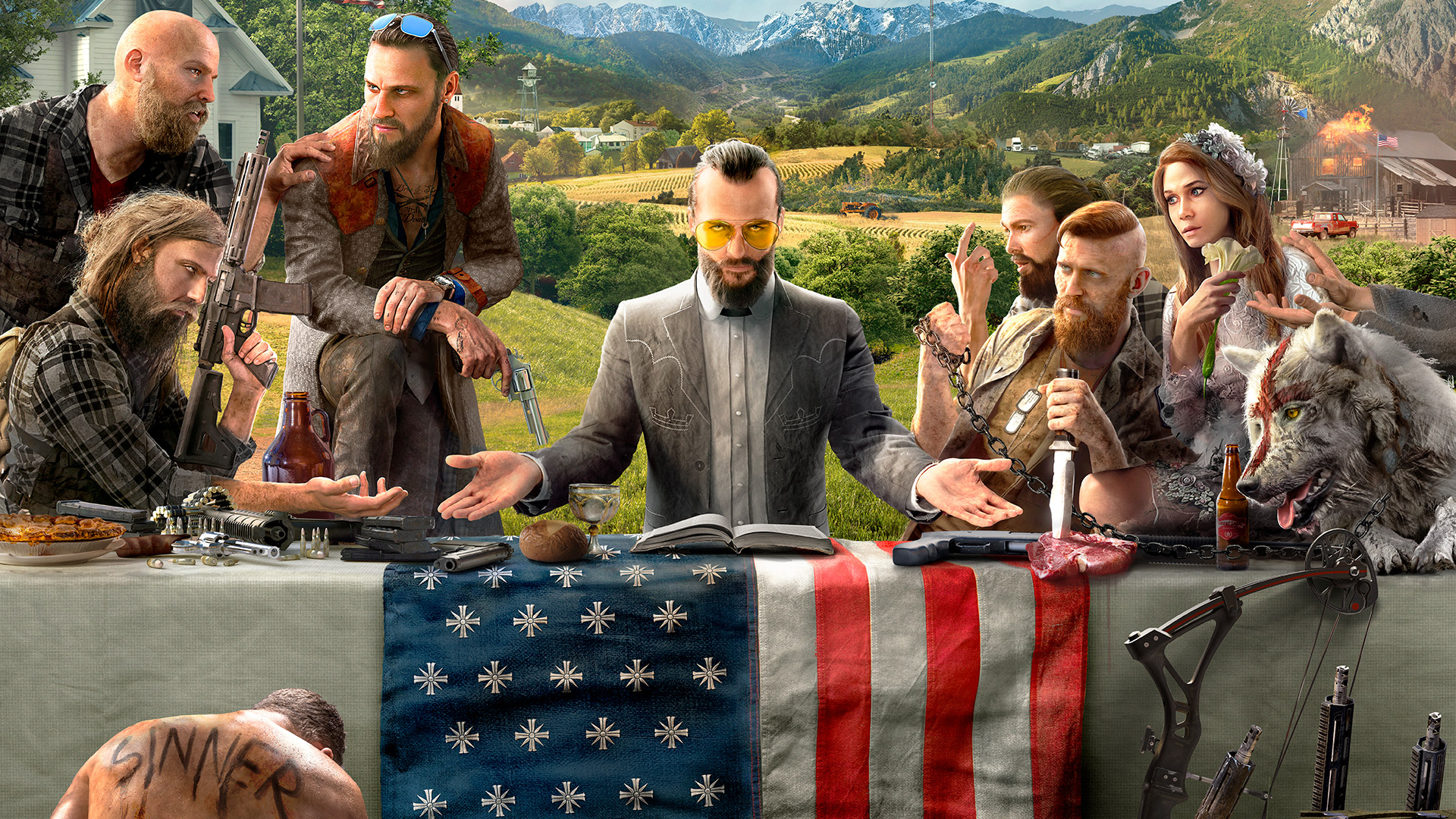 The Far Cry series has been a guilty pleasure of sorts. While I didn’t enjoy Far Cry 2, its subsequent sequels hit all the right notes for me, with Far Cry 3: Blood Dragon (which deserves a full-blown sequel, Ubisoft!) still seeing regular playtime on my Xbox One. However, Far Cry 5 might be the one that breaks that streak.

It’s a strong statement to make but, as somebody who’s played through every iteration of the series, Far Cry 5 is too much like Far Cry 4 and Primal to feel worthy of being called a sequel. It’s more of an evolution, a refinement of the ideas from past games brought together in a whole new package. Far Cry 5 takes place in the fictional Hope County of Montana, US. Playing a Sheriff’s Deputy, the game starts off with you accompanying a posse to arrest the leader of Eden’s Gate, a cult that’s taken root in the area. Needless to say, things don’t go as planned and you soon find yourself trapped. From there, it’s a rather predictable ride of taking down the Seed family, each member controlling specific areas of the county.

While the story won’t win any Oscars, it does set the stage nicely for the chaos to follow. The characters in Far Cry 5 aren’t as memorable or interesting as Pagan Min or Vaas, though the Seed siblings do provide enough incentive for you wanting to kill them.

Unlike past games, the whole world is pretty much open after the tutorial (your initial escape from the botched arrest mission), letting you pick which Seed family member to go after first. You still need to take them all out in the end, but the freedom to choose is still appreciated and can make future playthroughs a different experience. Progression in each region is represented by a Resistance Point (RP) meter. You fill it up by doing missions, assaulting cult strongholds, saving hostages, and a variety of other activities. Once you’ve reached a certain threshold, an essential mission is unlocked and the whole cycle continues, until you’ve liberated the area. It can turn into a boring grind for RP, though it’s a nice that some of the essential missions kick off without you knowing.

For example, I had just finished bombing some cult-owned silos to see the mission complete notification. With no other message on-screen, I decided to just skydive out of the plane. When I landed, the radio suddenly starts telling me that the cult is out for my blood. The next thing I know, cars full of cultists appear, before I go down in a blast of tranquilizers.

I honestly thought it’d be game over, when a cutscene starts playing instead. It was just a regular story mission. It’s impressive how organic and unscripted the whole thing felt, and I wished more missions in the game were like this. However, most usually have you heading to a quest giver’s location, with the mission having a clear beginning, middle, and end. If you’ve played any of the last three games in the series, you’ll have déjà vu playing Far Cry 5. There are animal companions (Fangs for Hire) like Primal, and human sidekicks (Guns for Hire) like in Far Cry 4. Some are combat specialists, providing sniper fire, explosives, or air support. Companions don’t just bring extra firepower, they can also revive you in battle. The AI isn’t half bad either; they follow orders most of the time, kill intelligently, and can even aim!

It’s awesome, especially with the animal companions, but I wish the system had more depth to it. Right now, they just unlock two hidden perks after a certain number of kills and that’s that. A more fleshed out system with individual skill trees would have been killer.

On the subject of perks, as a character you do get a boatload to unlock. They use the points you’ve earned from completing challenges, and come in multiple categories such as Survivalist, Renegade, Assassin, Prepper, and Leader. There are perks that allow you to reload and aim guns faster, carry more stuff, or even make your footsteps quieter. There’s nothing radical, and most will seem overly familiar; I wish Ubisoft had added more. There’s a grappling hook for Assassin which sounds promising, but it only works in certain areas and doesn’t see much use. In-game activities haven’t changed much. You still have outposts to liberate, hostages to rescue, and targets to blow up. There are stunt races you can do for optional loot and gear, and hunting hasn’t gone away. What’s new, then? Fishing! It’s hands down the best optional activity in the game, and your catches sell for a good chunk of cash too. While there is a crafting system, it’s not as crucial as it was in Primal; ammo and explosives can just be purchased.

Speaking of loot and gear, Far Cry 5 has plenty of customization options. There is an astounding amount of clothes to unlock, and guns have an array of parts including suppressors, extended clips and scopes. Then there are the vehicles. Boats make a welcome return, though with the open world the best way to navigate is by flying.

Here you can pick between choppers, planes (they drop bombs now!), or a straightforward air-drop. All three are feasible and fun to use, though my personal favorites are be the armed planes. There’s no greater joy than dive bombing a cultist outpost and then making strafing runs as they scramble for cover.

Ironically, the best part of Far Cry 5 isn’t the main game, it’s the optional multiplayer mode. The Arcade lets you create maps for solo, co-op, or competitive play, and is a damn fun way to pass the time. It’s cool being able to create stuff, plus any perks you unlock carry over from the main game and vice versa. You can then upload your maps or download the community’s creations, and I foresee this being a big part of Far Cry 5’s popularity down the road.

What’s already certain is that this is one mighty fine looking game, especially if you’re on the PS4 Pro. Far Cry 5 supports Boost Mode and supersampling, which makes everything run smooth and nice. However, the draw distance for objects needs work, especially when you’re flying. Trees, shrubbery, and grass will magically appear in front of your very eyes. It’s a tad distracting, though the impact isn’t felt that much when you’re on foot. Things can get a little choppy too when there’s a ton of action on-screen, though thankfully most firefights are fine. There are also weird glitches that I’ve seen, like enemies flying straight up when hit by cars or getting stuck in walls, but I’ve no doubt that future patches will iron these issues out. So far, I’ve not encountered anything serious like a borked save or crashes, and the whole experience is pretty stable.

On the audio side, the game has a weird mix of country and choir for its score. Weird, but definitely not bad on the ears. It’s an acquired taste that I think will jive with most people just fine. There are also a ton of licensed music, including my favorites “Only You” by The Platters, “Bad Moon Rising” by CCR, and “Rocky Mountain Way” by Joe Walsh. Bands like Journey, Rush, Kansas, and Lynyrd Skynyrd, whose music would fit the game to a T, are all weirdly MIA, though you can always use Spotify to add them in.

Far Cry 5 is a solid game and a great new entry in the series. The problem is that the game’s just rehashing what’s already been done. Sure, it’s more fleshed out now, but there’s still work to be done in some areas. At the end of the day, there’s not much that’s new in terms of gameplay. If you’ve missed out on the previous games or don’t mind that, then Far Cry 5 will make an awesome romp. Those expecting something of an overhaul, like what Assassin’s Creed Origins did, should avoid it. Hopefully the incoming trio of DLC packs would change that, just like what Blood Dragon did for Far Cry 3.

Far Cry 5 is out now for PC, PlayStation 4, and Xbox One.
Developed by Ubisoft Montreal and Toronto. Published by Ubisoft.
A copy was provided for review. Sal's just your average hardcore gamer. He started gaming on the NES in the 80s and has been ever playing since. Sal doesn't care about which platforms games are on, only that he wants to play them all!
Previous post MSI rolls out new gaming laptops with 8th Gen Coffee Lake CPUs
Next post Marvel’s Spider-Man releases on 7 September