Review: Everybody’s Golf VR is par for the course 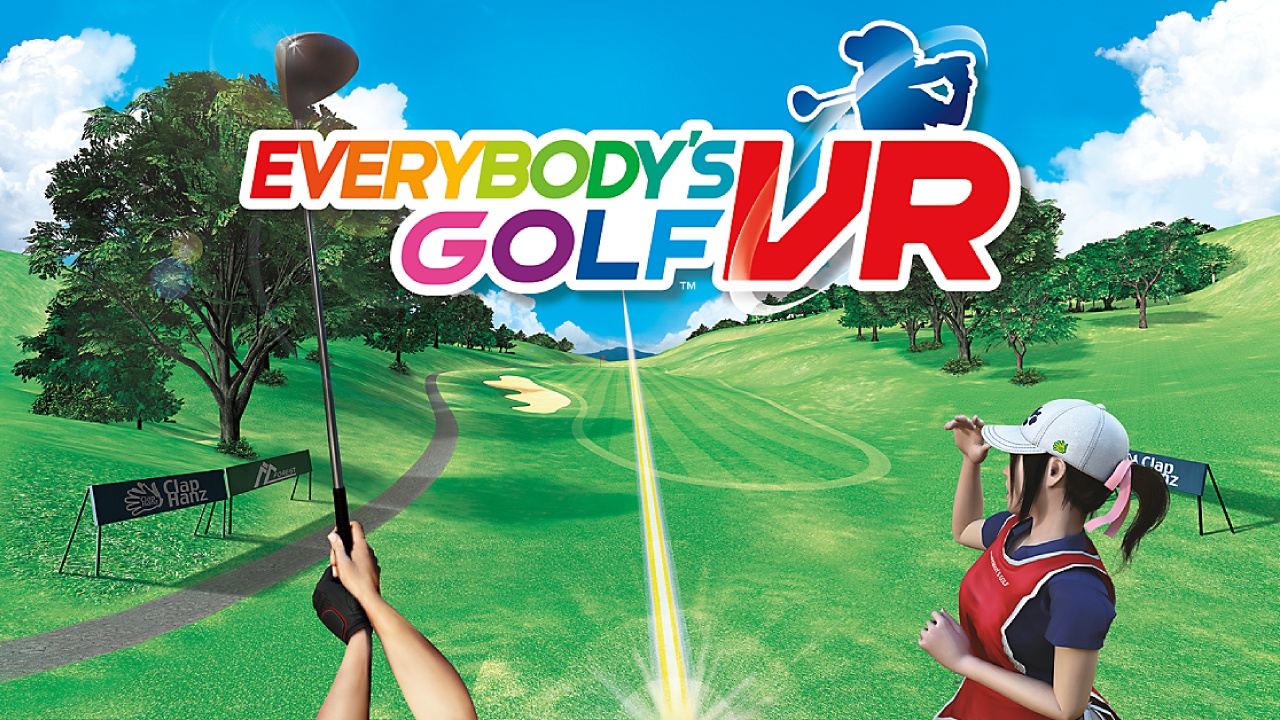 For the record: I’m atrocious at golf and sports sims in general, but that doesn’t mean I can’t enjoy them.

Everybody’s Golf VR is developer Clap Hanz’s first foray into the virtual reality scene, and a decent one at that. As a VR-ready version of the long-running franchise, there are a lot of changes from the original 2017 title that we’ll get into.

We know you’re ready to get swinging, but there’s one more thing to keep in mind. Like most VR titles, the constant motion in Everybody’s Golf VR can make you giddy if you’re not used to it. The last thing you need is to review the contents of your lunch on the carpet, so don’t push yourself.

Remember to take a break if you need to!

Now that all the administration is done and dusted, let’s get into the review proper. In terms of the good stuff, there are two things that I’d like to highlight: visuals and gameplay.

Most VR titles look awesome and Everybody’s Golf VR is no exception. It’s a far cry from the cartoon-y style that the series is known for, but hey, I’m not complaining! I’d much rather have a cute caddie like Riko than a standard bobblehead-esque one. Of course, it’s not just the NPCs that have been given a face-lift. The entire course looks quite spectacular behind those PlayStation VR lenses. People say “a picture paints a thousand words” so here’s to keeping my word count low. 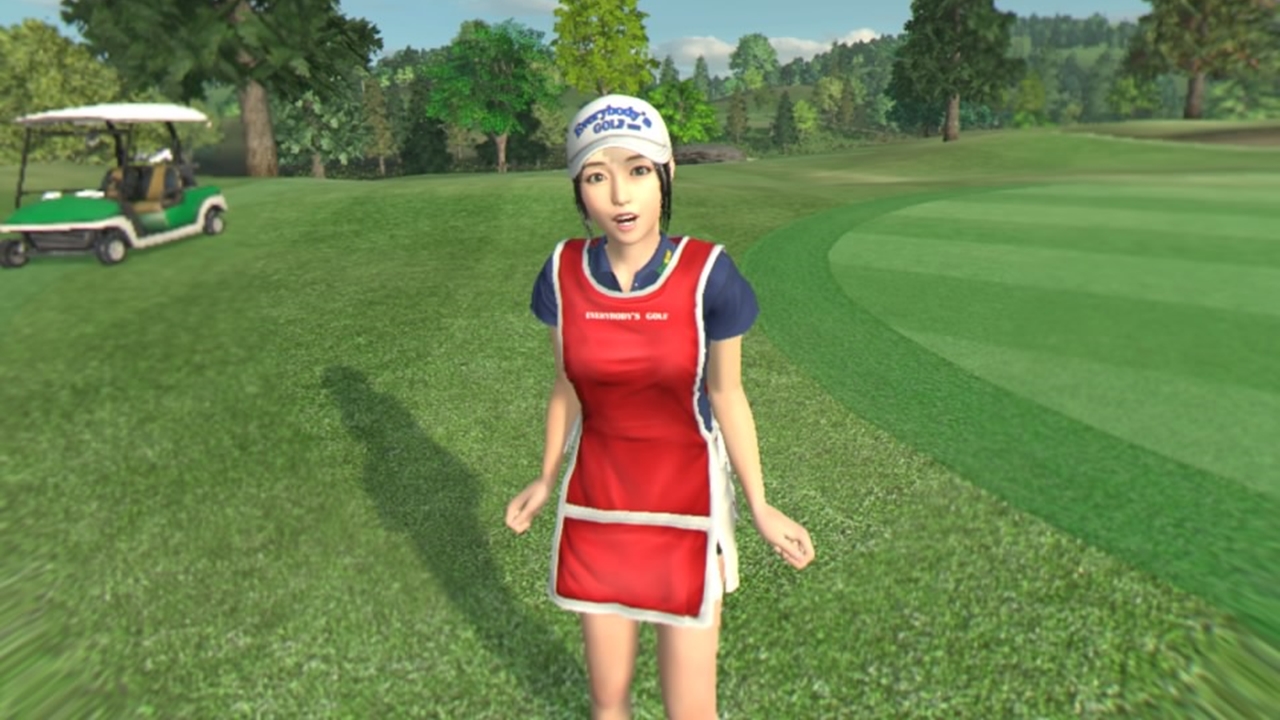 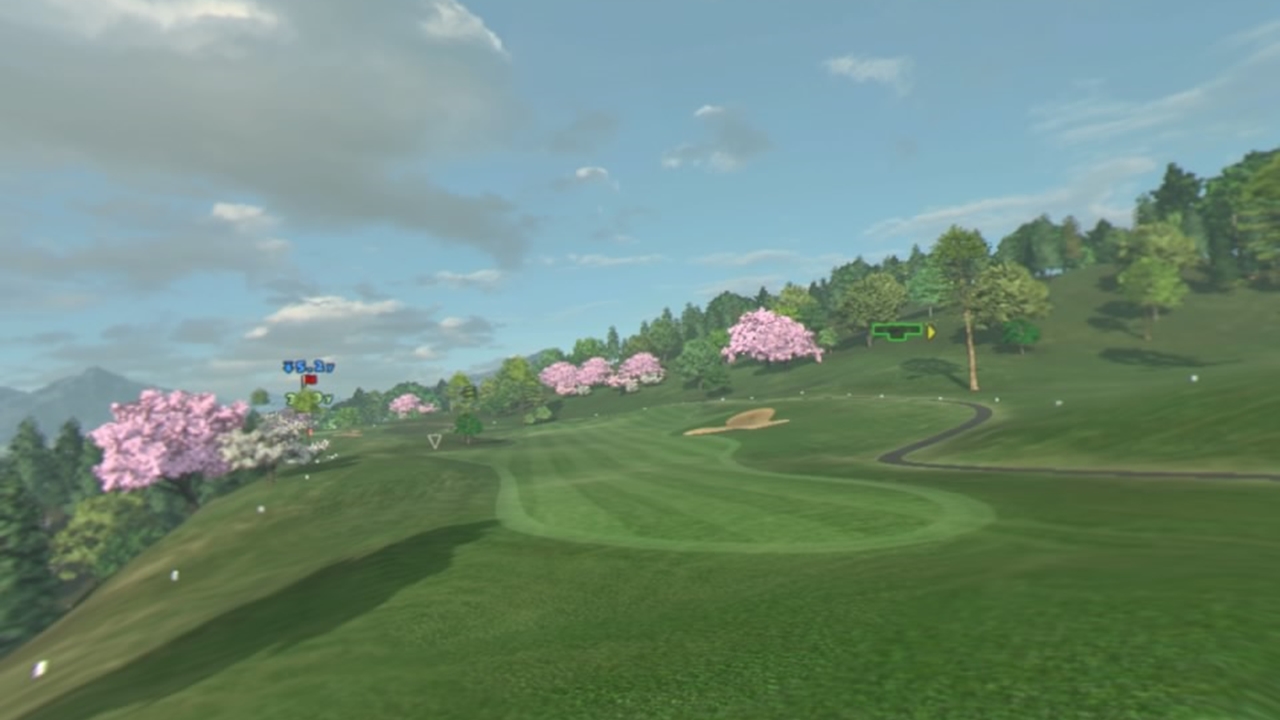 In terms of gameplay, Everybody’s Golf VR offers what you’d get at a real-life golf resort: 18-hole courses, putting greens and of course, the driving range. Fortunately, you don’t have to play through a full 18-holes every time you hit the course. There are shorter 3-hole and 9-hole courses, which are randomly selected from the full pool of 18. Not only does this make each of your run a bit different from the last, but it also provides you a faster option in case you just want to take a few quick swings. 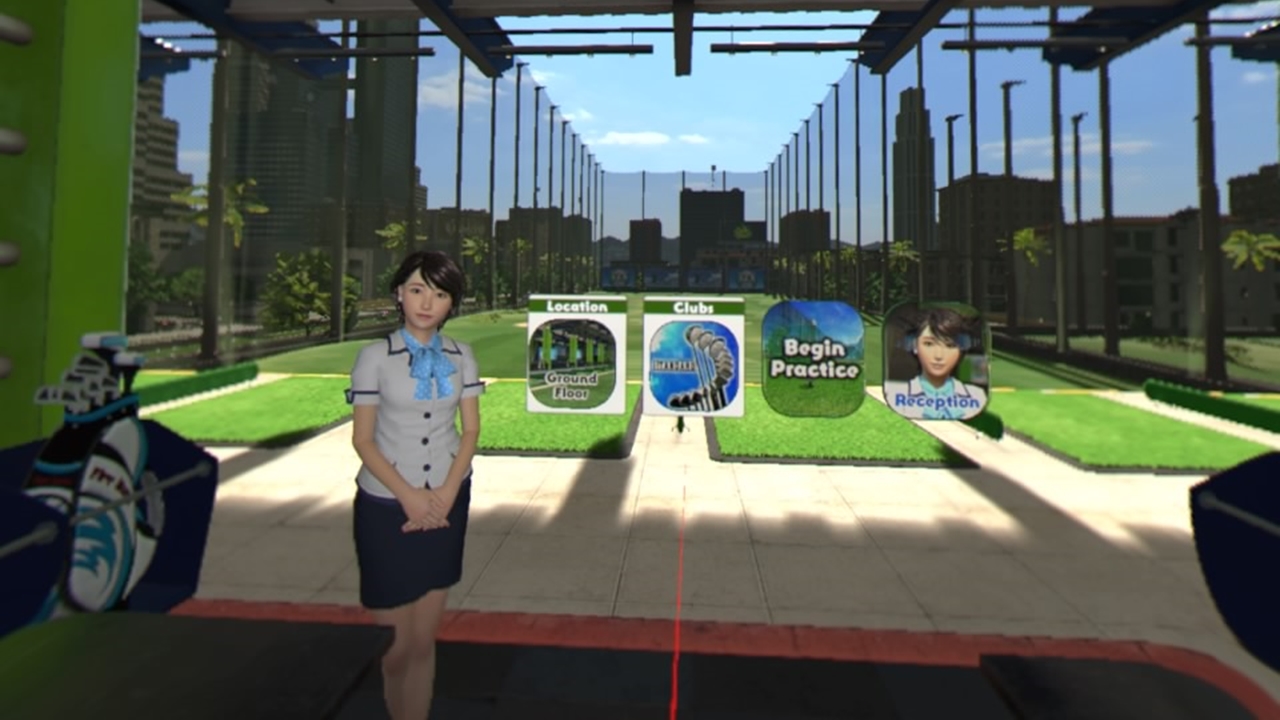 Just another day at the range…

Apart from great graphics and various course options, Everybody’s Golf VR does offer impressive beginner accessibility too. It’s the kind of game that you can pick up and play even without prior golf knowledge and still have a decent round. The UI is intuitive and easy to work with, but what really seals the deal are your caddy’s recommendations. 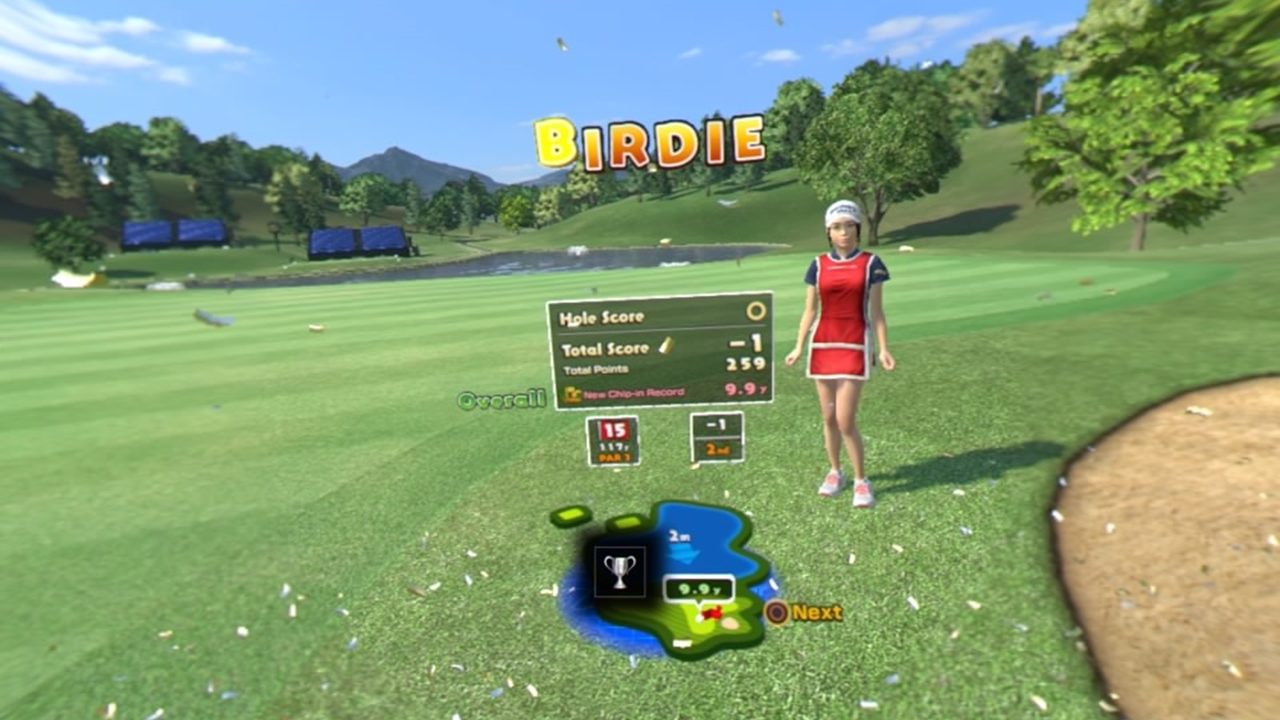 Finally something that isn’t a bogey!

Whenever you make a shot or are preparing for one, the caddy will offer the player various pieces of info. For example, if the ball is in a certain position relative to you (for example, below or above your foot), they’ll caution that the shot might go a little higher than expected. It’s helpful in the sense that these tips are usually known only to more experienced golfers, so it essentially bridges a small part of the gap for rookies.

On top of that, I really appreciate how the game shows the path of the golf club as you swing it. Not only does it make it easier to aim per se, but the interface also shows how powerful the shot is on a scale of 0-100%. As the cherry on top, the “thwack!” of your club hitting the ball is one of the most satisfying sounds to ever grace my ears. 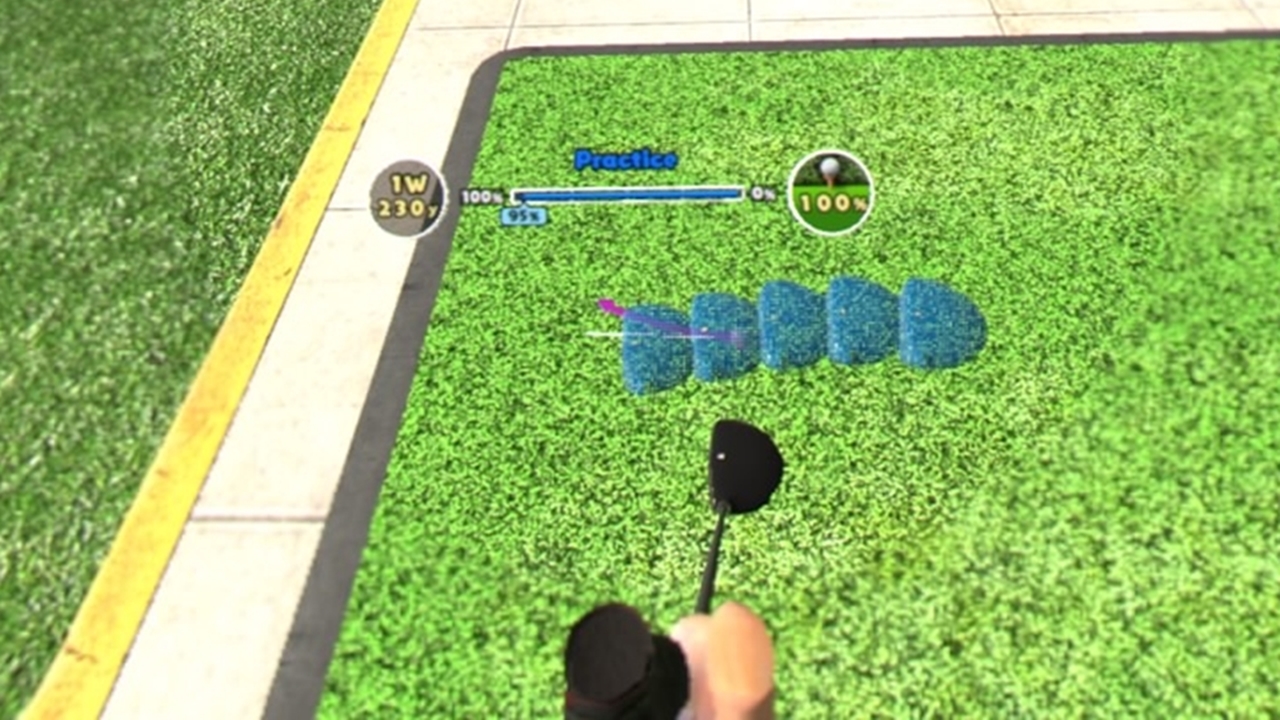 Perhaps a bit more to the right?

Of course, there are a few rough spots amidst the game’s lush green fairways. While that’s standard fare for most games, the problem here lies in how big those patches are. The first and most prominent issue can be summed up in one word: monotony. Yes, you can gaze at nicely rendered environments and have fun swinging your PlayStation Move or DualShock 4 like a golf club, but what more CAN you do? 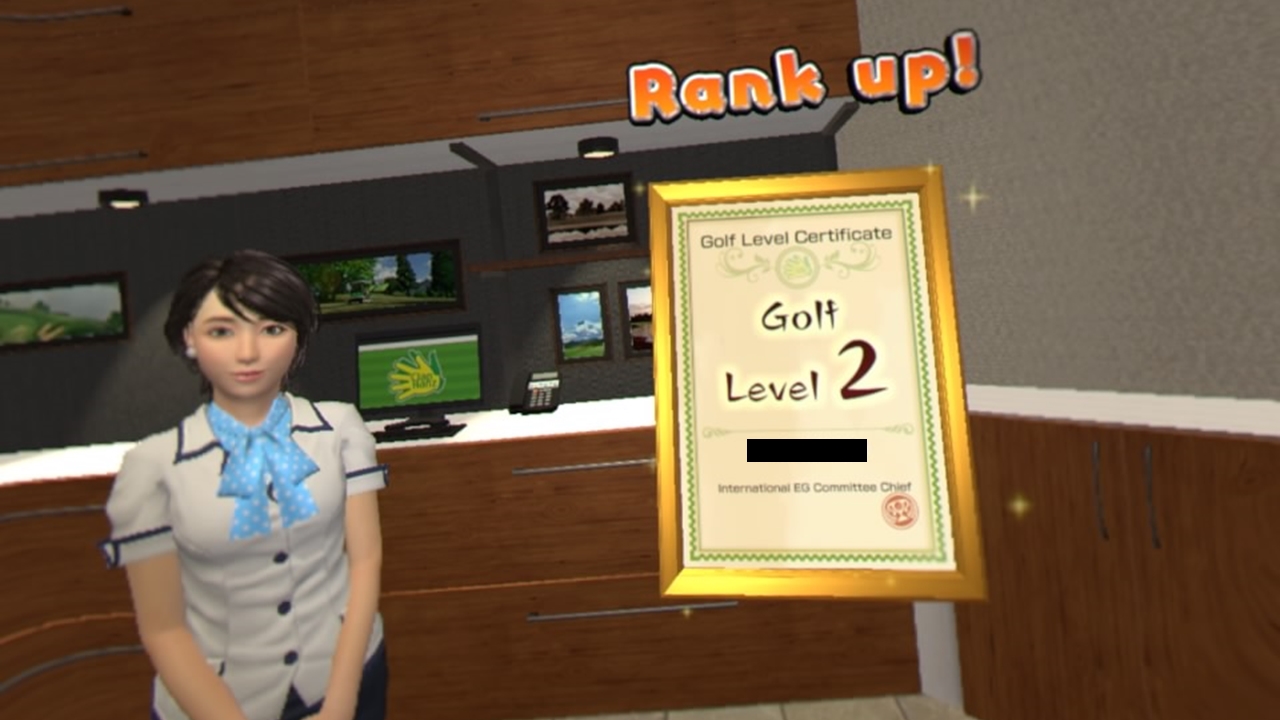 The answer is: not much. For a game with such finely-tuned mechanics, it’s a shame that Clap Hanz didn’t implement a Career Mode or even local multiplayer to begin with. In short, there really isn’t anything to do apart from, well, golfing.

To the developer’s credit, it’s not like they didn’t try to add anything else into the game. There are cosmetic items and sequences that you can unlock over time. The former are pretty self-explanatory, but the latter leads up to the game’s next major patch of issues.

Or a half-baked dating sim?

Simply put, by spending time with each caddy, you’ll eventually unlock their special sequences. For example, one of Riko’s sequences involves her showing you a shortcut, which is apparently a single wooden beam stretched across a chasm. Halfway along she decides that it’s a bad idea (well, obviously) and turns back. For what the scene is worth, it’s pretty cute but doesn’t contribute to the game as a whole. Additionally, there aren’t any chat options, so the whole “date” is completely one-sided to begin with. 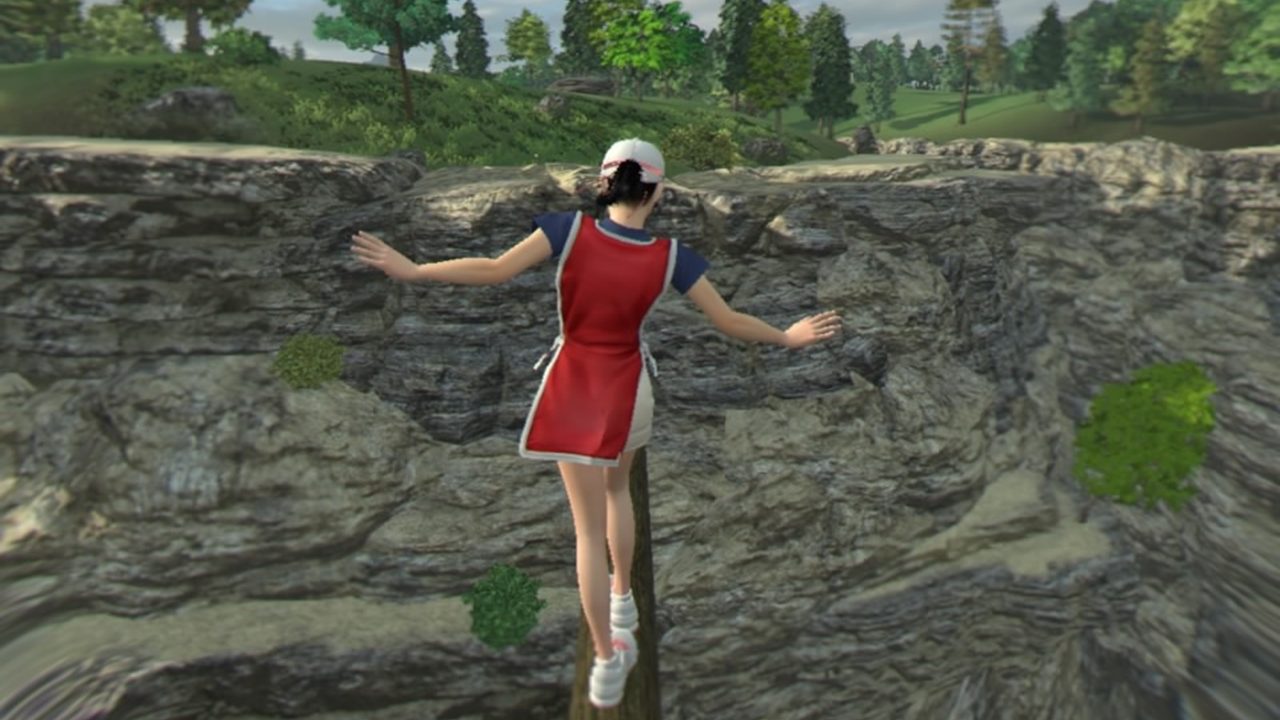 Who told you this was a good idea to begin with?!

Getting back to the point, each caddy has four of those sequences, and if you’re dedicated enough you’ll be able to unlock them. That said, the main obstacle is once again, the grind. And after snagging those you’ll just be back at square one, with nothing much to look forward to.

TL;DR: You’re bound to get bored of looking at cute caddies and just swinging golf clubs day in, day out. There’s no real goal in Everybody’s Golf VR, other than ranking up, getting new high scores or grinding for in-game cosmetics and sequences.

So does Everybody’s Golf VR win any trophies?

Well yes, but they’re few and far between.

Everybody’s Golf VR is a reasonably good game for what it offers  — golfing from the comfort of your living room, one or two cheeky mini-dates with caddies and a handy way to keep the kids busy at housewarming parties.

Unfortunately, the game doesn’t offer much beyond that. There’s no career, story or tournament to keep you around, and any shred of replayability is overshadowed by the monotony of grinding. Adding on to that are the dating sim-esque caddie sequences, which feel way too forced and one-sided. 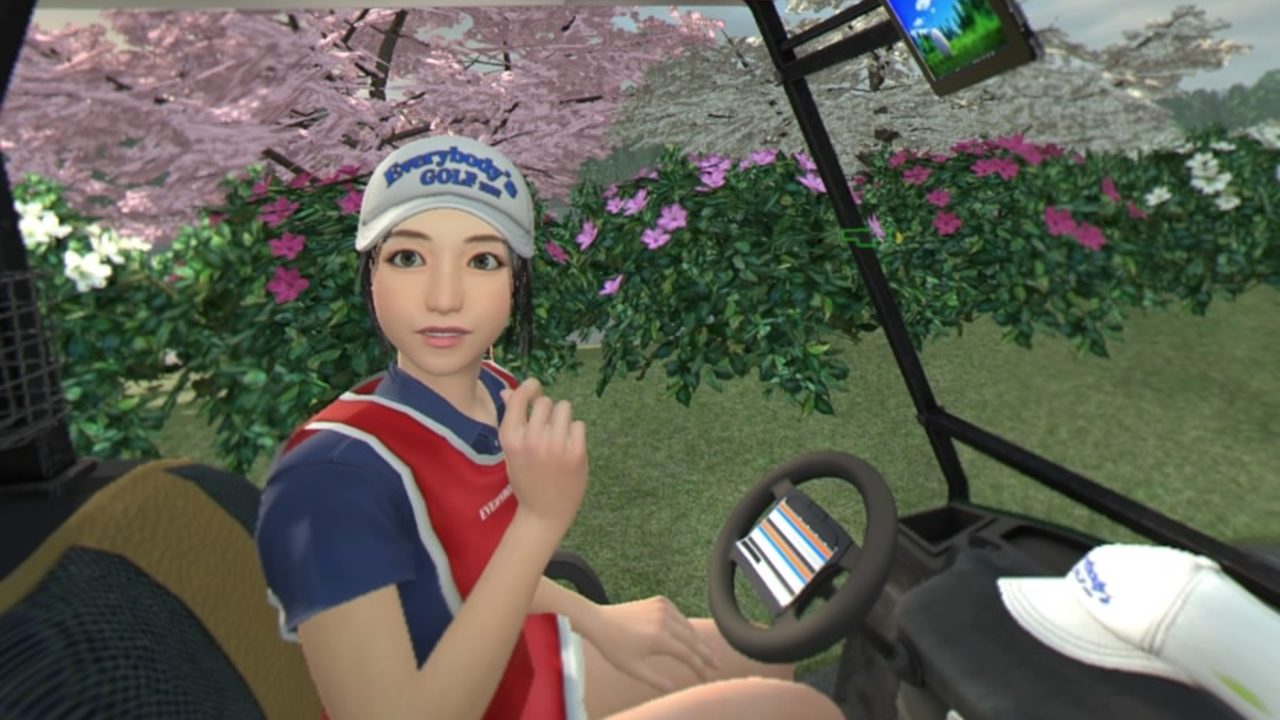 Granted, those help to provide a bit of flavor but it’s like putting mayonnaise in your coffee — some things just don’t click. Also, that’s gross.

Jokes aside, given that Everybody’s Golf VR does check the boxes that it needs to — namely graphics, first-person perspective and beginner accessibility — the final score isn’t abysmal. Yes, it doesn’t offer much outside of those and the VR gimmick, but it’s still decent overall. So, if you don’t mind hopping in every now and then for a spot of golf, Clap Hanz’s latest is still par for the course.

Everybody’s Golf VR is out now for PlayStation 4 (PSVR required).
Developed by Clap Hanz. Published by Sony Interactive Entertainment.
A digital copy was provided for review.

Kenneth is your dedicated jack of all trades gamer and borderline anime nut. When not writing, he likes to wind down with Overwatch, Apex Legends and a bit of Fate: Grand Order on the side.
Previous post Apex Legends’ new event begins this week, plus early S2 Battle Pass details
Next post Apple’s iOS 13 preview brings various improvements and a new Dark Mode