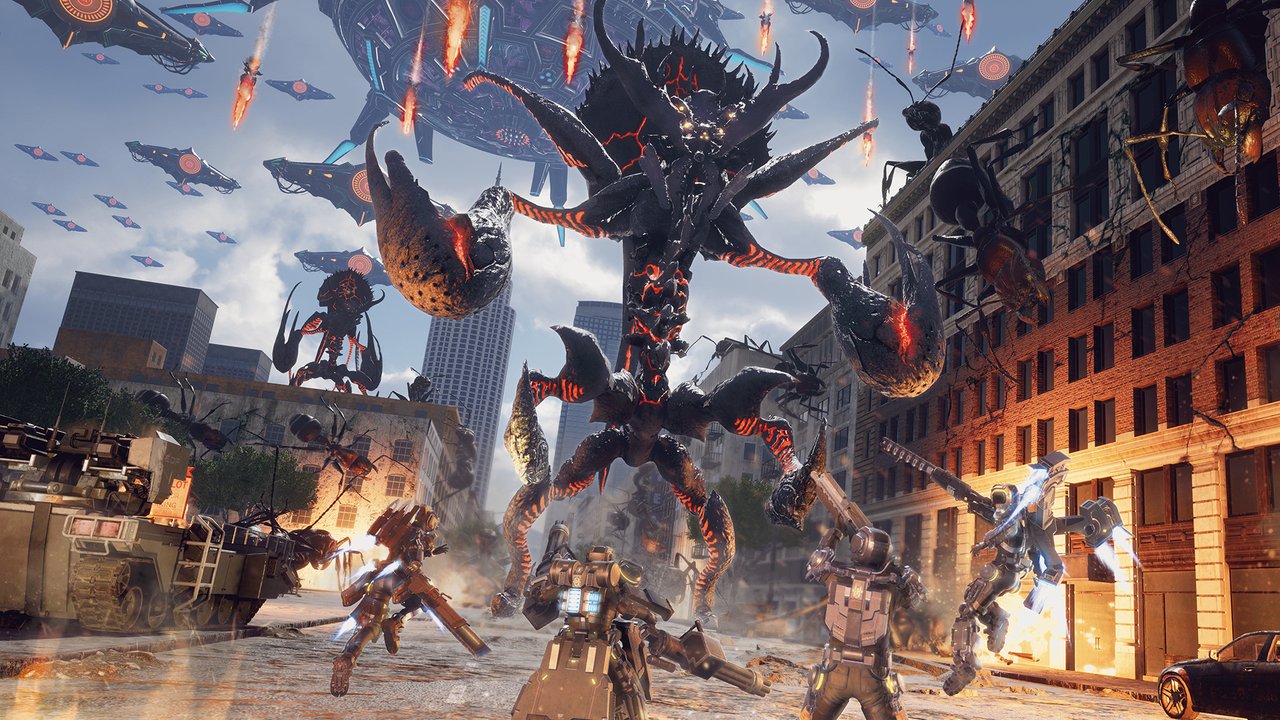 Earth Defense Force: Iron Rain had me utterly fooled. I came into this game with the impression that it was going to be a fun and carefree experience, shooting down giant bugs and robots with the biggest guns I can find. In the end, it proved to be a game with more layers than players might have expected. Or even wanted.

It turns out that Iron Rain is not just a simple game where you shoot bugs left and right. Or rather, you can, but which bugs? Which guns? These questions matter, because the game is never content in letting you do things your way. Developer Yuke’s is attempting to introduce new mechanics to the EDF series, pumping it full of challenge and strategy it had previously lacked. They have succeeded for the most part, but at the expense of fun. 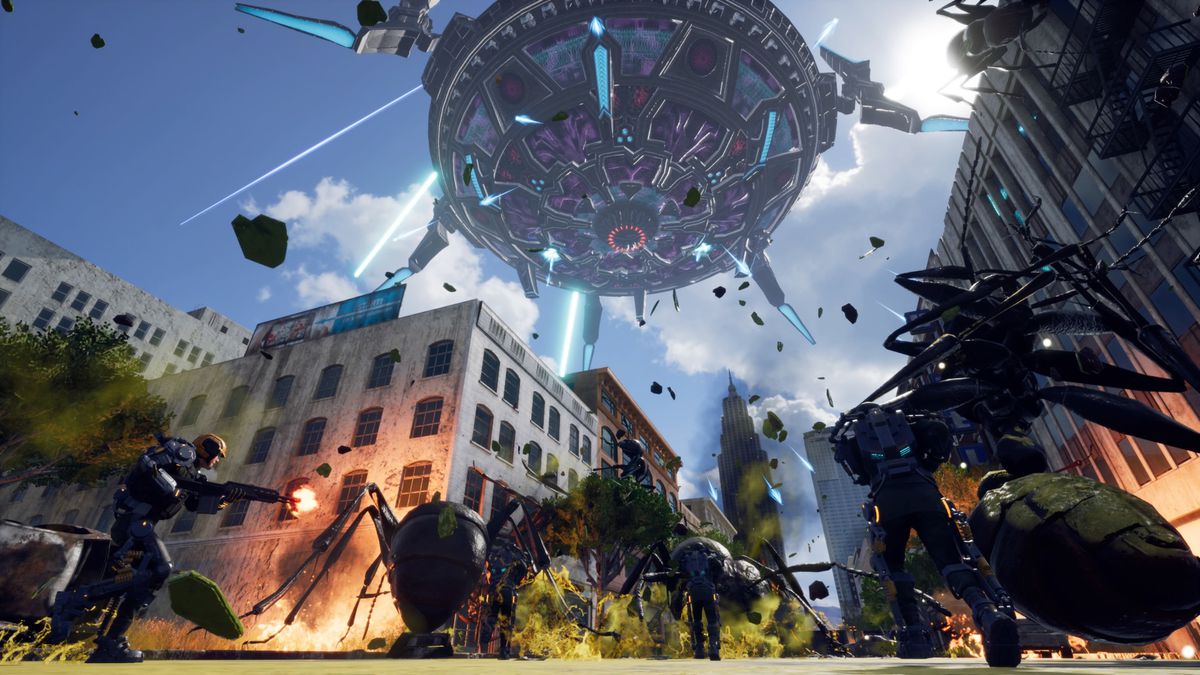 Iron Rain has a rather simple premise. The Earth Defense Force is an international military organization spanning the entire globe, hopping from location to location to protect humans from gigantic, malevolent alien creatures that seek to destroy us. There are 52 missions to kill various giant bugs with various giant guns, and as far as the story goes, that’s really all there is to it.

Some interesting plot points find their way in, such as an opposing military faction called the Kindred Rebellion. They frequently show up in missions and battle the EDF for resources and Energy Gems dropped by enemies. However, these small additions merely serve as window dressing, with the game feeding you most of its lore in between missions and during loading screens.

Voice acting is especially prominent for the first time in the EDF series. The game largely follows a squad of EDF soldiers that banter with each other during missions. The voice acting isn’t great, but it does have a certain B-grade movie feel that almost charms in its setting. Iron Rain doesn’t have much story to offer otherwise, with the small amount it has being stretched over those 52 missions and dosed out in tiny increments. 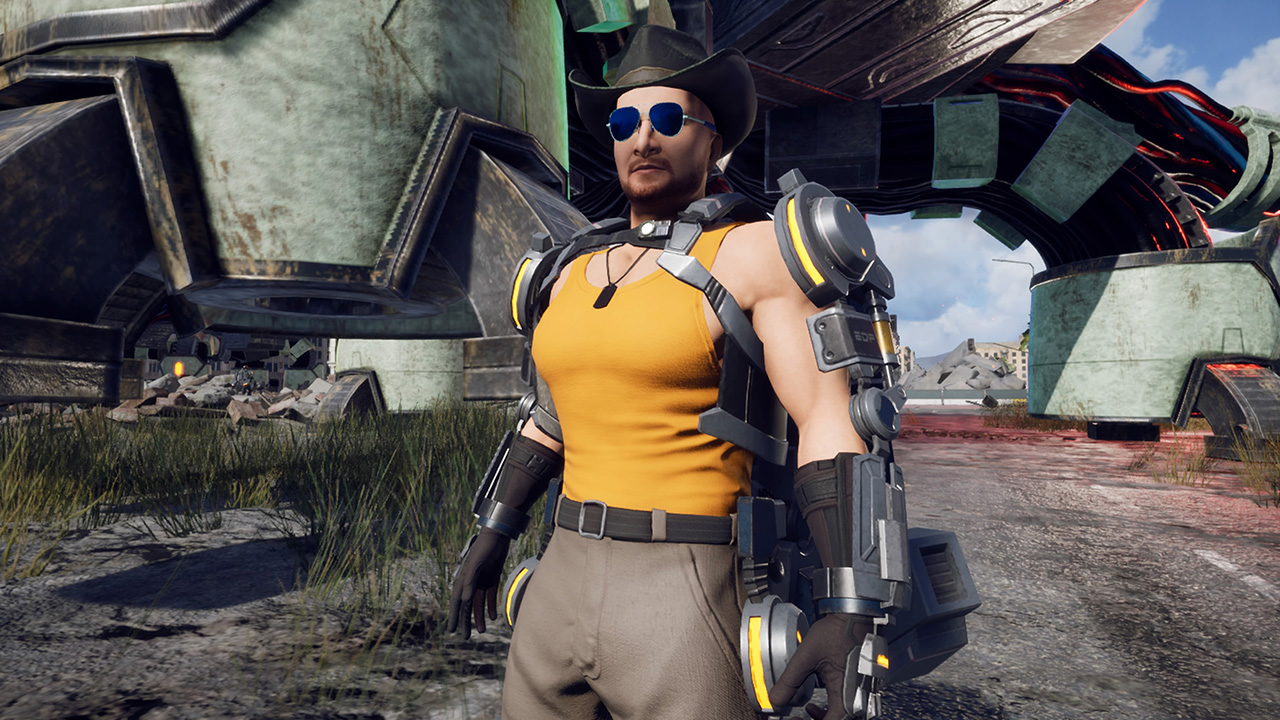 On the technical side, the game suffers from some frame rate issues on my PS4 Pro. It varies wildly from mission to mission: sometimes it’s actually quite acceptable for a game with so much destruction onscreen; other times, it gets extremely choppy, dipping below the 10 to 20 FPS range.

Iron Rain features an extensive character customization system. Almost every aspect of your character, from their gender to their body size and clothing, can be altered to your choosing. It’s a very well executed system, and it’s always fun to pick and choose different outfits to make your character stand out, especially if one is playing online or with friends.

You get 4 character classes throughout the story. These are the Trooper, Jet Lifter, Heavy Striker and Prowl Rider, each with different abilities and stats such as defence and mobility.

For example, the Trooper can do a quick side-to-side dodge, while the Heavy Striker has a giant energy shield that blocks all incoming damage. These are limited by a meter, and if the player isn’t careful they could find themselves backed into a corner with all their abilities on cooldown. 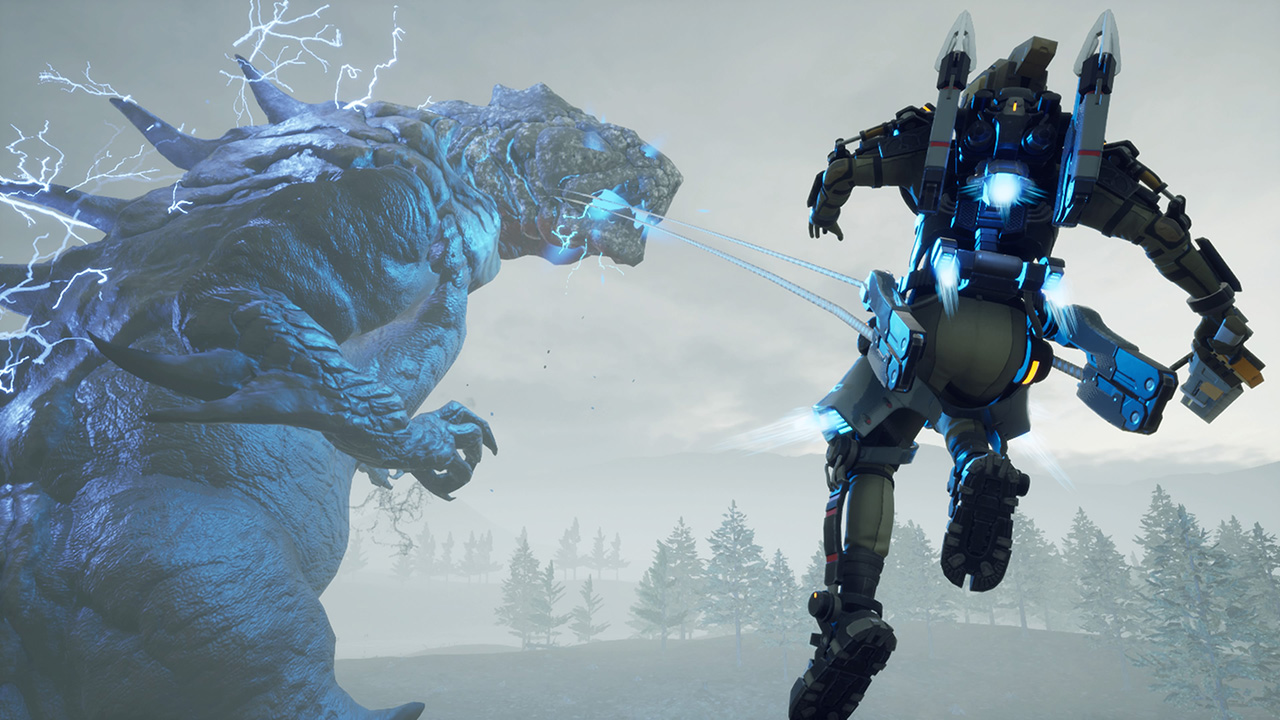 That’s exactly where the game’s Overdrive mechanic comes into play. Overdrive acts as a turbo button, temporarily granting the player infinite ability use, quicker fire rates and faster reloads. Activating the Jet Lifter’s Overdrive puts you in the shoes of a well-armed Superman, raining hellfire down on all manner of unholy creatures.

Overdrive can only be activated once per mission, though, so you have to choose wisely on when to go all out. If playing with others, you can coordinate Overdrives to turn the tide of battle. This can be pivotal during later missions, which are almost impossible to beat without timing your Overdrive use correctly.

Weapons in the game are colourful and many, ranging from typical shooter fare such as assault rifles and rocket launchers, to more unique weapons such as gigantic swords and laser rifles. Players unlock these weapons by completing campaign missions, gaining more powerful options as they progress. The in-game weapon descriptions are a surprisingly great read as well, and I probably spent a lot more time on those screens than I should have writing this review.

Unfortunately, weapons never feel as powerful as they look in Iron Rain. Unlocking them can be quite a grind, as you must split earned currency four ways between more health points, cosmetics, weapons and items. These weapons never age well either, as they’re either replaced by a better one a couple of missions later or rendered useless almost immediately by the appearance of stronger enemies. 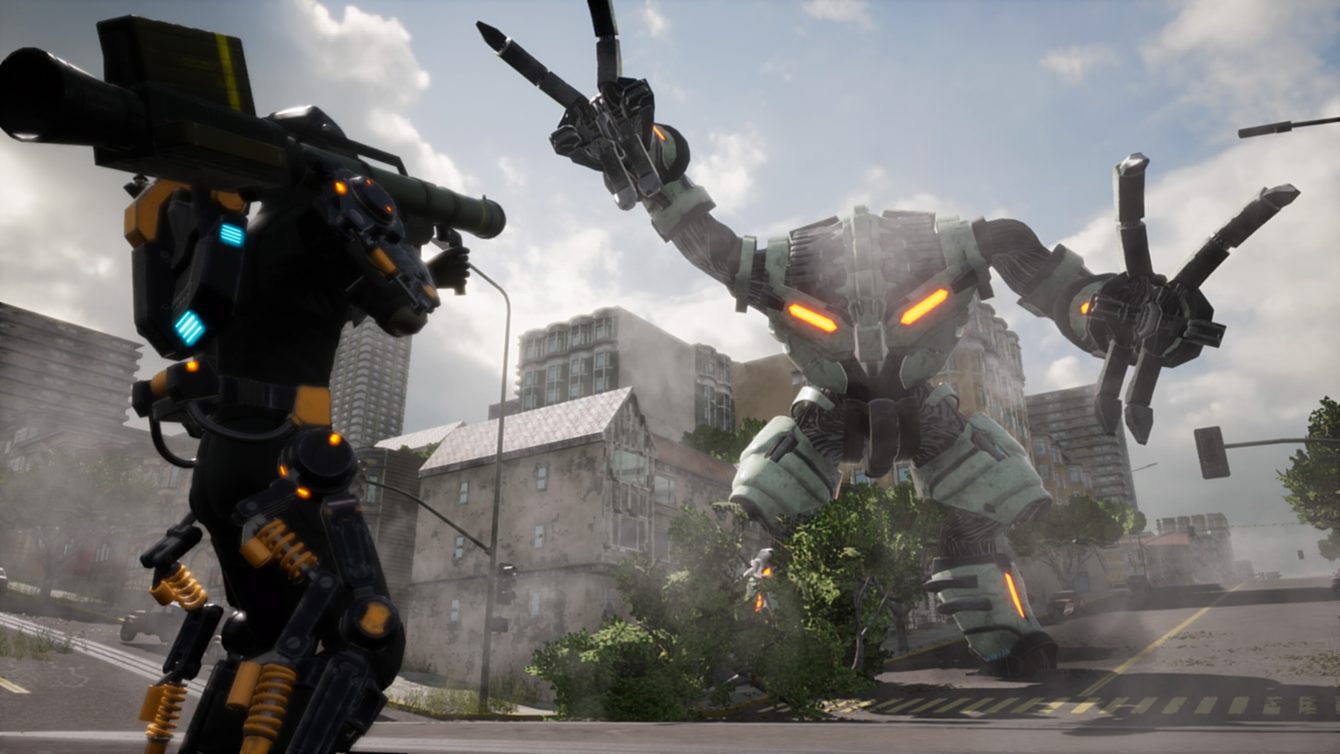 The game is always changing things up every mission. Between boss battles, bullet sponge enemies and swarms of insects, I’m never given the freedom to play with my favoured equipment loadouts. There is always a ‘meta’, a range of equipment best suited for a given mission, and I pay a price for straying from it.

For example, you may love playing as a Jet Lifter, but its low defence forces you to switch to the Heavy Striker instead for boss battles. This illusion of choice irks me. I could use the Jet Lifter class, of course… if I enjoyed dying and failing the mission repeatedly.

To its credit, Iron Rain tries to combat this by giving each weapon and character class a specific drawback. However, that makes it feel like I’m being held back, constantly overwhelmed by hordes of enemies that just won’t die quickly enough. Items exist for this exact reason but even their use is punished, their cost deducted from the mission’s award.

On the bright side, the story can get spectacularly chaotic with explosions and destruction as far as the eye can see, as if every mission is the third act of a Michael Bay movie. There’s a simplistic sense of awe in seeing a gigantic mech tear a building to pieces, or shooting a rocket launcher at a skyscraper and watching it crumble down on a mob of giant ants. The apocalypse has come, and the game has no trouble making you believe it. 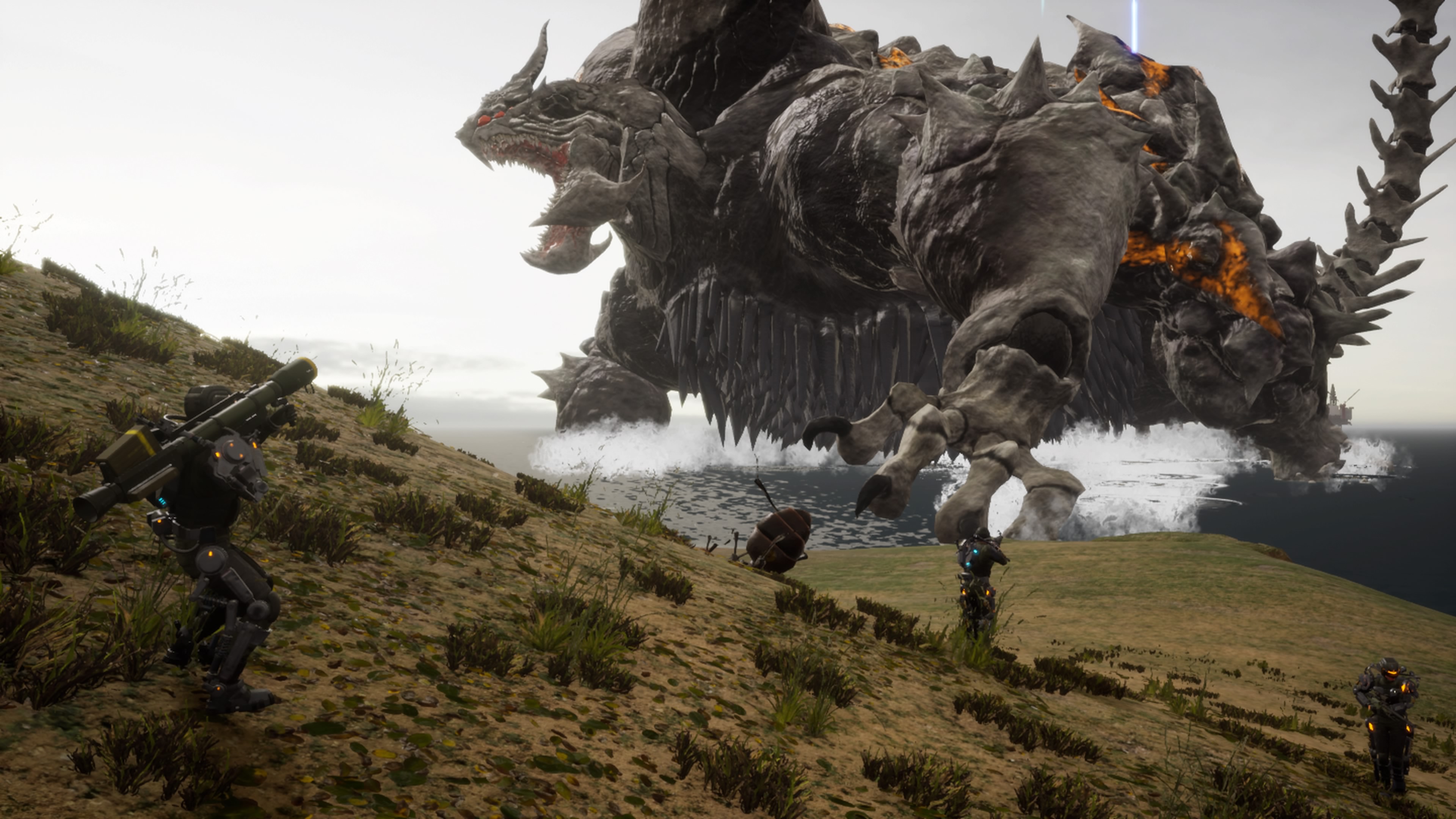 There is also a ton of enemy variety present in Iron Rain. The game adores flinging new enemy types at the player to keep them off balance. Between giant robots, insects, hovercrafts and monstrous kaiju, there are plenty of different things to shoot at. Unfortunately, this gets old very quickly. A tense, all-out battle against a literal army is insane fun, but in every single mission? That’s a bit much.

Overall, mission structure seems to be at fault here. Each mission revolves around killing armies of Aggressors, until the game throws new enemy types and you’re forced to switch things up a little. This isn’t bad, and the variety does feel nice, but the uninspired art style and bullet sponge enemies makes everything boil down into a “Kill this, get Gems, get out” cycle.

There are some aspects of Iron Rain that I like. I love figuring out when to time my Overdrive during missions, and I love the simple joy of wiping out waves of alien bugs and giant robots. Unfortunately, the game gets in its own way a lot of the time, throwing out increasingly frustrating missions with a frankly insane number of tank-y enemies. The story isn’t interesting enough either, and doing the same thing over and over with different weapons hardly makes it an engaging experience. 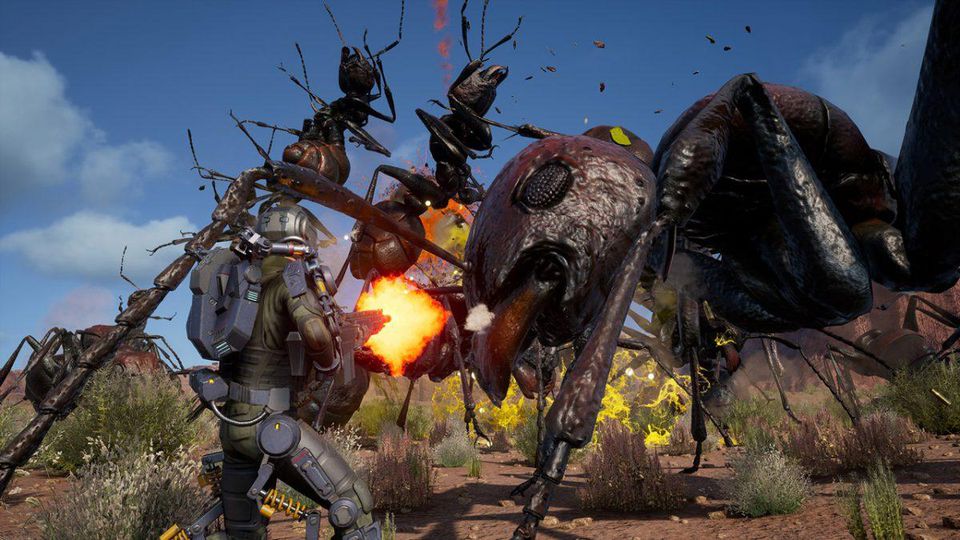 Earth Defense Force: Iron Rain looks like a relaxing game about crushing huge bugs, but often those bugs just end up crushing you instead. The challenge might seem enticing to some, but the bullet sponge enemies, choppy frame rates, and repetitive missions suck the wind out of those sails all too quickly.

Earth Defense Force: Iron Rain is out now for PlayStation 4.
Developed by Yuke’s. Published by D3Publisher.
A copy was provided for review.