Review: Earth Defense Force 5 is B-grade gaming at its finest 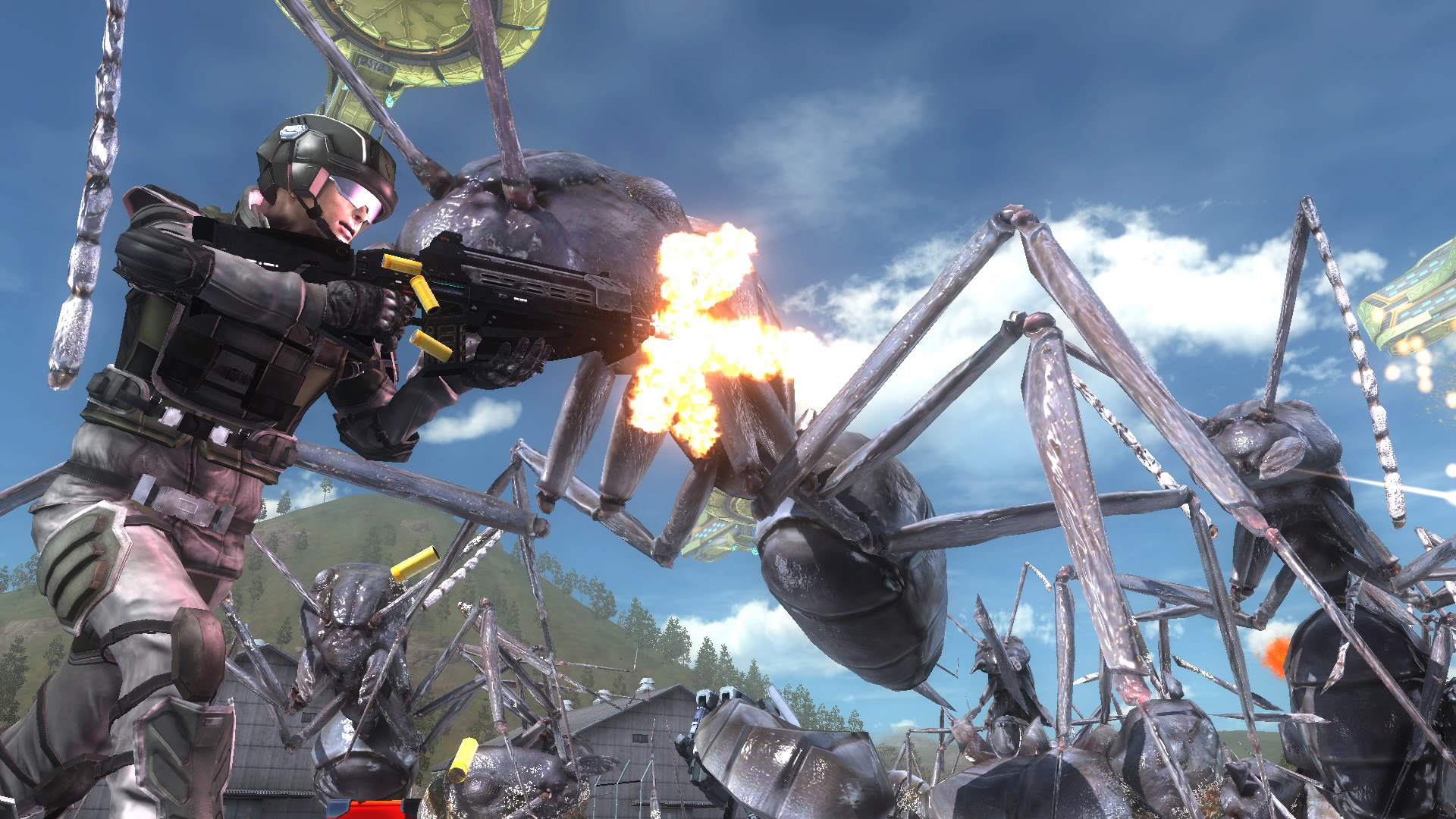 Playing Earth Defense Force 5 is like coming back to a pair of well-worn shoes. It feels instantly familiar, you know what its quirks are, and you know what you can do in them.  In fact, you get so comfortable that you momentarily forget why you changed those shoes in the first place.

Unlike games striving to push boundaries, the Earth Defense Force series has always been content to sit in its niche and churn out sequels, marginally adding on that what’s been established. The results have always been mixed, falling into love-it or hate-it camps, and that’s the case this time around too.

Like the older games, Earth Defense Force 5 has just enough semblance of a plotline to tie the missions together. It’s a reboot of sorts, starting off right as humanity encounters the aliens threatening Earth. You begin as a civilian caught up in this apocalyptic mess, though it doesn’t take long for you to join the fight as well. 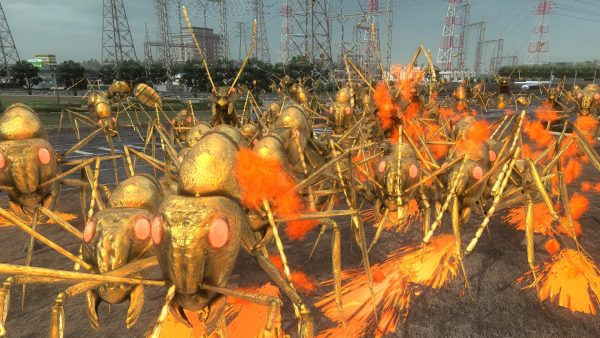 Paper-thin is an apt way of describing the story. There’s barely any character development — yours doesn’t even speak — and the people you meet are only there for exposition dumps. It’s sad that the reboot doesn’t really set the stage better, especially if future games will continue the story from here on out.

What hasn’t changed are the four playable classes. Rangers are your standard infantry weapon specialists, while my favorite Wing Divers carry out devastating aerial attacks with their jetpacks. The Air Raiders supports the rest by calling in air strikes and and vehicle drops, and Fencers lay down the heavy weapons fire. Those last guys are brutal, as they’re equipped with power armor and can single-handedly take down massive swarms with ease.

The Wing Divers jetting about with their plasma weapons are a completely different playing experience from that of the Fencer, who plods around on the ground and nukes everything in sight with explosives and large-caliber weapons. Wing Divers and Rangers also get new moves to play with, the former getting useful, low-energy air dashes while the latter can now sprint. 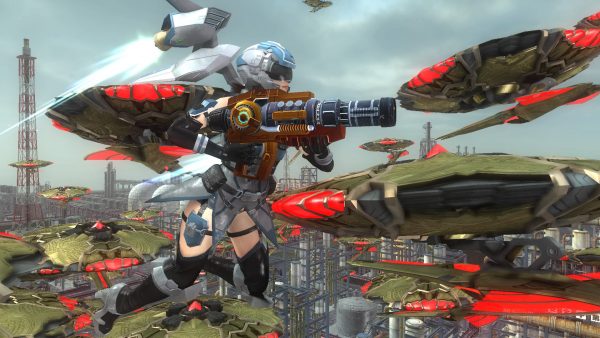 Gameplay variety is where Earth Defense Force 5 truly shines. There are a ton of different weapons for each of the classes, and nearly all of them feel unique. You have rocket launchers, plasma cannons, chainguns, sniper rifles, even experimental weapons to wage war with. Needless to say, there’s probably something for everybody.

That’s great since some of the missions are clearly geared towards certain classes than others. Playing as a Wing Diver can make what was once tough missions insanely trivial. The difficulty does level out once you’ve sufficiently geared your classes, though, so you can easily blaze through past stages with your favorites.

Gearing up is pretty much a core part of the game. Things can get pretty tricky when you’re under-equipped, even on Normal difficulty, so dying is pretty much a given in those early moments. To make matters worse, there aren’t any checkpoints when you die, which makes some missions really frustrating. 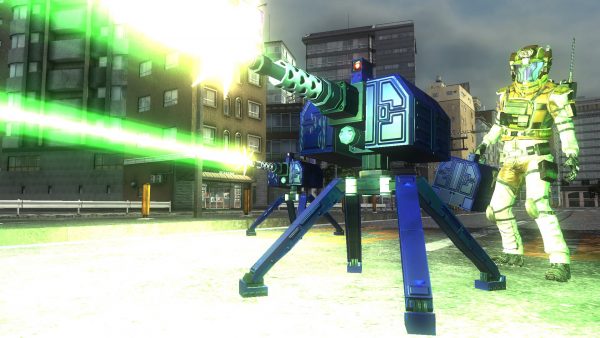 You get new toys to play with from the random enemy drops; duplicates have a chance to upgrade your current equipment, making them stronger. This random approach is a really questionable design choice, especially when your favorite weapon is sorely underpowered. Better hope you get lucky and find the necessary upgrades, or its back to the grind with you.

These weapon and armor drops are distributed to the other classes too, which just muddies your chances even more. Thankfully, the class that picks up these drops will still get the majority of that new gear, and this also means that your other classes will steadily improve even if you don’t use them.

There are about 110 missions in all, each with multiple difficulties (the last two unlocks only after you’ve completed the game). Mission length can run from just a few minutes to upwards of half an hour, depending on how fast you manage to kill. You usually have to destroy everything to complete a mission, and while I would have loved more variety I’m of two minds regarding this. 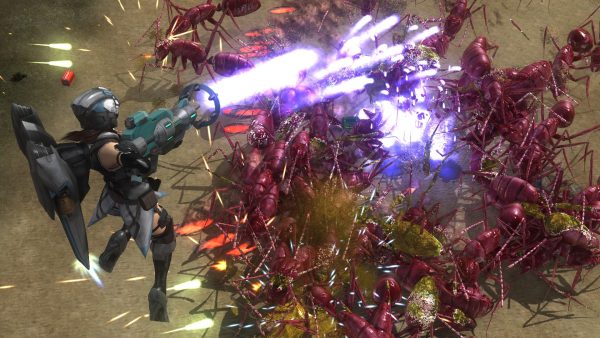 On one hand, I love the mindless action that the Earth Defense Force games are known for. On the other hand, there’s been little to no evolution in mission variety since the series’ inception, and it’s starting to get boring even with the huge number of aliens you can kill. These can range from giant ants to flying saucers, jumbo-sized spiders, and large humanoid frogs with guns.

It’s great that you’re usually fighting them with friendly AI by your side. They’re more than just cannon fodder and can kick ass pretty well, though their numbers are nothing compared to aliens you’ll face. However, I wish the radar did a better job of differentiating allies and items — everything is a colored dot on the mini-map, which can get confusing in the chaos.

While it may be business as usual, it’s good to see that performance in Earth Defense Force 5 seems to hold up better. There are still bouts of slowdowns here and there but, overall, the single-player framerate does seem to be smoother. It might sound like a minor thing but it’s certainly appreciated, and it’s pretty impressive seeing all those screen-filling enemies. By battle’s end, the in-game landscape will be filled with severed alien parts and rubble. 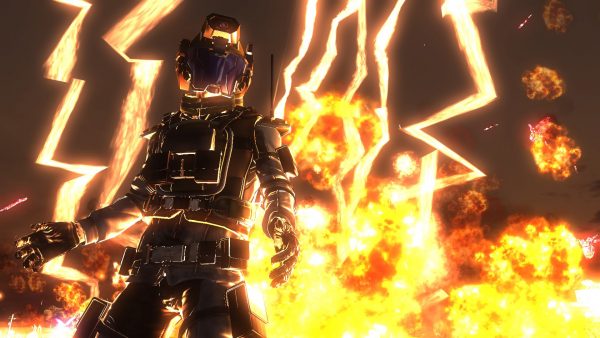 That collateral damage is definitely part of the fun, especially later on when you have access to the really destructive guns. The physics may be pretty basic but it’s still damn fun watching building, radio towers, and whatever else crumbling before you.

Of course, all that tanks when you’re in online multiplayer, played with up to three others. The framerate is not as smooth as the single-player but, if you can overlook that, you’ll be rewarded with a great time bug-slaying with your buddies. You even have multi-seat vehicles to wreck havoc with.

Be prepared for some frustration, though, as there is friendly fire. It’s tough trying to avoid each other’s fire with all the area-of-effect weapons, and there certainly are griefers out to ruin your day. The game definitely needs to a friendly-fire toggle. 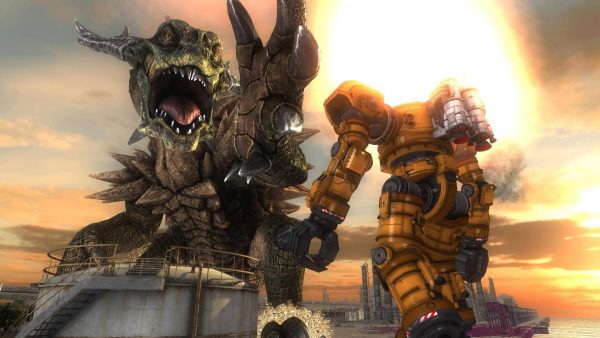 Earth Defense Force 5 can also be played in split-screen, at greater cost to your framerate. It actually doesn’t look that bad, but that’s mainly due to the game being pretty plain in the first place. Certain textures can get blurry up-close, like those on teleportation ships, while the environment looks pretty bare. Special effects like explosions are similarly muted and basic. All that was fine when the series was a budget release, but it’s getting harder to excuse now that it’s a major priced game.

There’s still an air of schlock that permeates the game, which is great since it’s what made the series so lovable in the first place. Lines are deliciously overacted and over-the-top, and can be hilariously out of place given the action on-screen. New players might not appreciate its campy nature though, since one would expect higher production values from a game nowadays. It’s also unimaginable for a game to not have subtitles, yet here we are without them. It’s a massive oversight, especially for those who have hearing difficulties or can’t play on high volumes.

Earth Defense Force 5 is a great game but it demands a certain level of expectation from its players. Don’t jump in expecting a AAA experience, despite it being priced like one. Instead, go in knowing what the game truly is: B-grade entertainment with corny dialogue, a kooky atmosphere, and intense action. I guarantee you’ll enjoy it more that way.

Earth Defense Force 5 releases on 11 December 2018 for PlayStation 4.
Developed by Sandlot. Published by D3 Publisher.
A copy was provided for review. 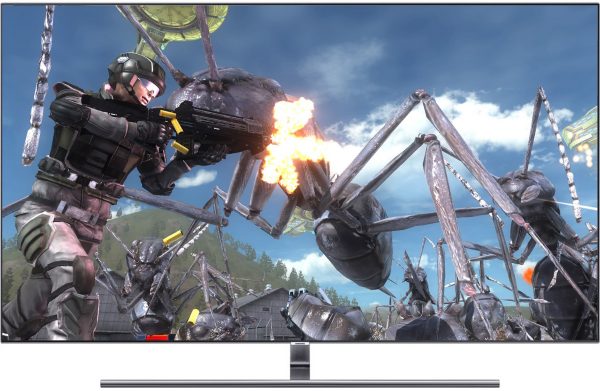 Sal's just your average hardcore gamer. He started gaming on the NES in the 80s and has been ever playing since. Sal doesn't care about which platforms games are on, only that he wants to play them all!
Previous post Review: Battlefield V is an amazing game with great value
Next post PlayStation 5 details potentially leaked