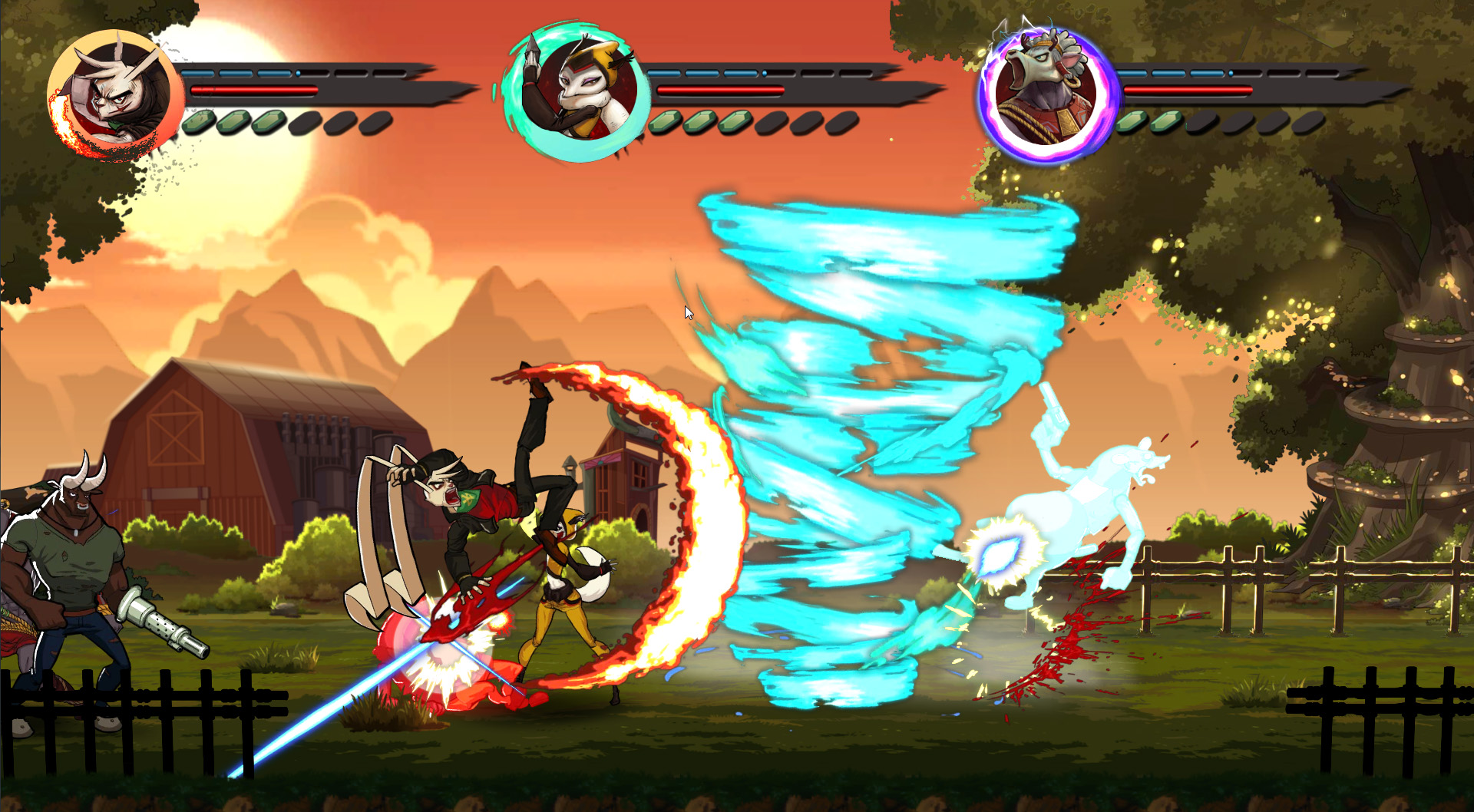 The golden age of brawlers may have ended with the 16-bit era but that doesn’t mean there’s no demand for a decent beat ‘em up. Castle Crashers was awesome, though the gold standard for modern beat ‘em ups has got to be Treasure’s Guardian Heroes. So where does Dusty Raging Fist stand? Let’s just say that it’s lucky it came out with barely any competition.

Brawlers have never been about their plot. Take Bare Knuckle aka Streets of Rage, for example. Its story was nothing more than three renegade cops coming together to take down Mr X. OK, sure, Guardian Heroes was different but the point still stands; a brawler’s plot is secondary to gameplay. To that end, Dusty Raging Fist’s set-up of a dark moon rising and an ancient evil spreading across the land is hardly Shakespeare, though it does set the stage (and fits the genre) nicely. It’s too bad then that everything fumbles from that point on.

You play as three different characters in the game: Dusty, Kitsune, and Darg. Weirdly, the game doesn’t tell you what their strengths or weaknesses are. Is Kitsune fast but weak? Is Darg stronger because he’s bigger? Is Dusty the jack of all trades? I suspect that’s the case, though without confirmation who knows? All I know is that Dusty is a rabbit, Kitsune is a fox, and Darg is… I don’t know, a ram or a goat. But I kind of like the anthropomorphic character designs; if only there were more enemy types so the artists could flex their creative muscles. Each of the three characters have different moves, and you get more by spending collected orbs to level up. You can also use those orbs to power up your summons and support abilities, or find crystals in chests to boost your base health and support meters. The thing is, the upgrade system is incredibly opaque so you never know what you get because the game never tells you. Generally, though, improving your character gets you new combos while supports and summons get enhanced abilities.

You can play with up to three players locally but there’s no online play. If you play solo you can switch characters, though that means quitting the game and reloading your save file. It’s troublesome and I wonder why the developers just don’t implement a character switch option at the game’s numerous checkpoints.

Reloading is also the only way to revisit past stages, as the game automatically moves you to the next area when you’re done. Dusty Raging Fist has stat-improving crystals hidden throughout the level, so you’ll want to replay pretty often. That’s fine and dandy in theory, however the game is buggy in that it sometimes won’t let you to pause (which opens up the upgrade menu). This usually happens out of combat but it works fine during fights. If this is a built-in feature then it’s an incredibly weird one that’s never mentioned anywhere in the game.

The game tracks your combo count but, like most of the gameplay systems, I’ll be damned if I know what it’s for. Does it net you extra XP when you finish a battle with a higher combo? I don’t know, since the only way to check your XP earnings is to regularly open the upgrade menu. In fact, you don’t even know when a fight’s about to end as there are no enemy life bars.

I feel life bars are a must in brawlers. It’s a guilty pleasure of mine to see the dropping health on minions I’m killing, and also finding out their weird names, in games like Bare Knuckle or Final Fight. While awesome brawlers like The Simpsons and the Double Dragon games don’t have any, I’ve always been partial to those that do,  so this might not bug you as much as it does me.

Fighting is decent fun, though like other parts of the game the collision detection can be wonky. I’ve been hit while evading and have had direct attacks whiff enemies who were right in front of me. Enemy attacks tend to stun you easily, but it’s the exact opposite for you. Dusty and the rest have different moves you can perform, but I rely on a few stalwart attacks as my bread and butter. And although the characters animate adequately, I’d prefer seeing them with more frames.

Touching on combat more, Dusty Raging Fist is mainly button mashing with a few combos thrown in for good measure. A deeper system would have been better, perhaps one with counters, but what’s in the game is serviceable if rather shallow. Bosses (who happen to have life bars) can be an exercise in frustration as they’re more likely to trade blows with you, rather then get defeated through superior player positioning and tactics. The most egregious offender, however, is how air combos are handled.

You can execute single air attacks just fine, but trying a combo kills your momentum, making you hang in the air like a weird Looney Tunes character. It gets especially problematic when you’re doing the platforming bits and there are enemies trying to swat you out of the air. Do you hit them and then air-dash, hoping the dash’s momentum can get you onto a platform? Do you ignore them and just run? Neither works particularly well, and I’ve found that only luck seems to get me pass such sections. The summons and support characters mentioned earlier mixes things up a bit. Summons usually affect the whole screen with their abilities, while support comes as a sniper or artillery. Supports are a pain in the ass as the enemies are still moving around and can damage you. I’d have preferred the Streets of Rage style, where the gameplay freezes and cuts away to play the support animation.

While I dig the character designs, the same can’t be said for the environmental graphics. Bland and generic are the two most apt terms to describe them. They look so interchangeable that you’re sure that you’ve been running in circles throughout the stage the whole time. Assets are reused too frequently, with too few pieces that stand out. If it’s any consolation, there are a quite a variety of stages, and Dusty Raging Fist is rather lengthy for a brawler. It doesn’t have the legs of an RPG, but it’s certainly longer than ilk like Golden Axe or Captain Commando.

Luckily, the ambient score is rather well done, though perhaps that’s a result of the rest of the game being pretty underwhelming. The tunes fit the stages well and almost makes it all palatable. Almost.

However, the audio takes a turn for the cringe-worthy any time there are voice-overs. From the overbearing narrator in the intro (which has typos in the subtitles) to the characters themselves, voices are clearly not the game’s strongest point. I’d have settled for  zero voices and more text, really. Dusty Raging Fist clearly needs more time in the oven. There are elements of a good game in the mix, though it’s overshadowed by irritating issues that could’ve been easily fixed with more time. I’ve no doubt that fixing and tweaking the issues highlighted in the review would have it a much better game. It won’t be a classic like Aliens vs Predator or Turtles in Time, but it would definitely be a worthy addition to the genre. For now, though, Dusty Raging Fist is a barely-there brawler that, while fun at times, frustrates more often than not.

Dusty Raging Fist is out now for PlayStation 4. (PC and Nintendo Switch versions coming.)
Developed and published by PD Design Studio.
A retail copy was provided for review. Sal's just your average hardcore gamer. He started gaming on the NES in the 80s and has been ever playing since. Sal doesn't care about which platforms games are on, only that he wants to play them all!
Previous post Review: The LG 34UC89G shapes up nicely for ultra-wide gaming at 1080p
Next post 4FINGERS teams up with God of War, Wings of Power combo meal can send you on a paid trip to E3 2018