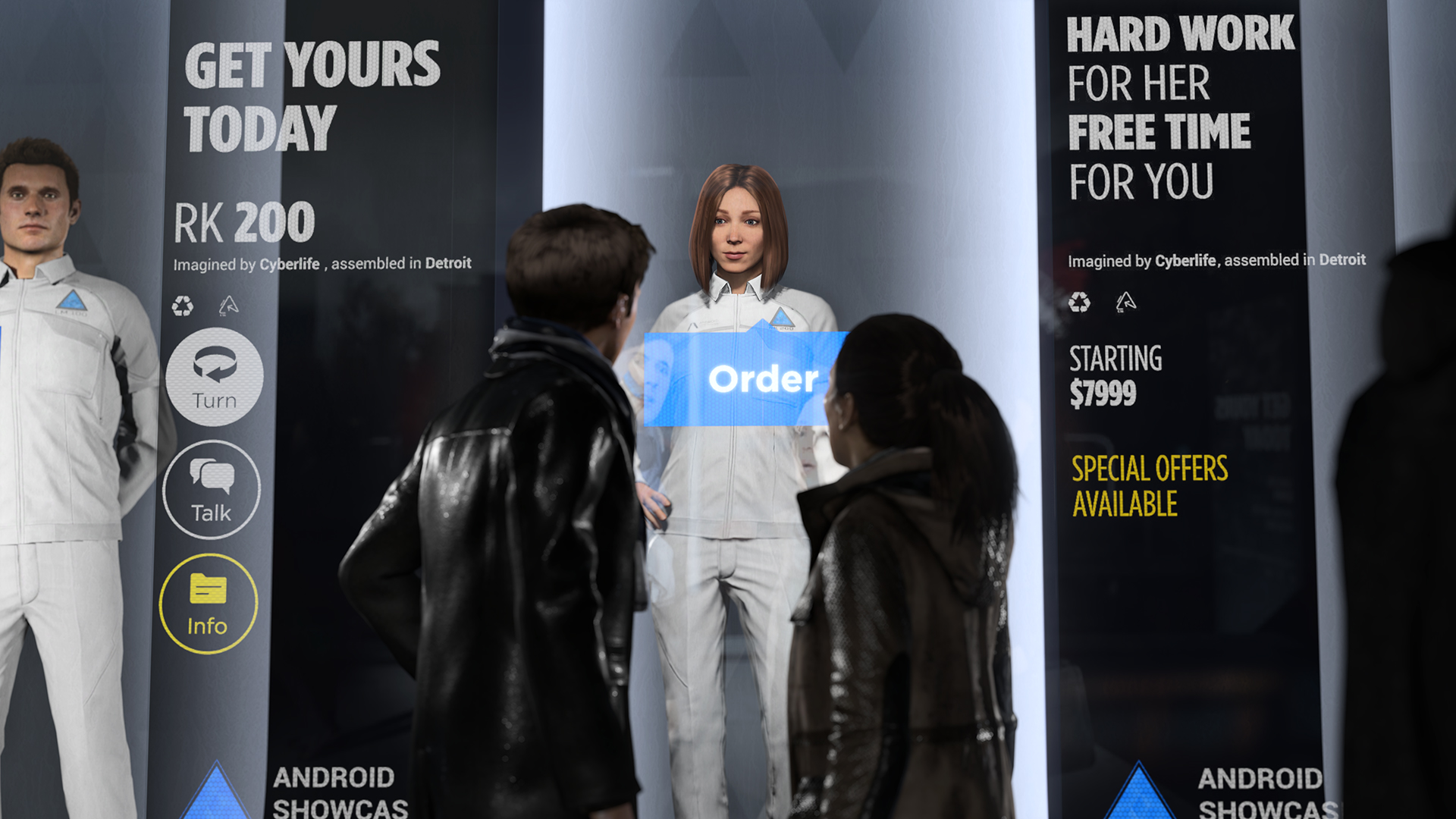 With smartphone AI being all the rage these days, it doesn’t take much imagination to bridge the gap between talking to a phone and interacting with a life-sized android. All it takes is one technological breakthrough, one inspired spark, and the world will change faster than you know it. And so it is with Detroit: Become Human, a project that all began with a 2012 tech demo. Six years later, we have the developer’s best release thus far.

Playing Quantic’s latest often left me wondering if “interactive fiction” is a better label for it than “video game” — it’s far from being a new debate, but there are connotations and expectations involved with each. Even so, I wouldn’t consider the former disparaging. Far from it. Where titles such as God of War masterfully weaves an impactful narrative with engaging combat, Detroit simply chooses to emphasize storytelling. There are fights, and there are shootouts, but not in the way most gamers expect. Androids have long been a sci-fi vehicle for social class disparities and moral rights, so it’s little surprise that Detroit: Become Human follows suit. The game starts with a fantastically rendered, fourth-wall breaking greeting by Chloe, the “first android to pass the Turing test.” It’s there to impress us with the in-game world’s tech, to flirt with the possibilities of what might be, but we all know that reality is, in fact, grim.

Cue the opening sequence with Connor, the specialist android built to deal with emotional, ‘Deviant’ peers. Transition to Markus, a caretaker android at the forefront of the bubbling human-machine conflict. Segue to Kara, the housekeeper android that gives us insight on what it’s like to be on the run. Detroit’s story is told from their perspectives, all refreshingly different and more personal than it is heroic.

However, there’s just one glaring problem: their characters don’t resonate as androids. The world and gameplay may treat them as such, but they behave and think like persecuted humans rather than AI coming to grips with self-awareness. It’s less of an issue with Connor, as he’s partnered with a human detective who has an unreserved love for alcohol and the exact opposite for androids. That back-and-forth, combined with plenty of investigative gameplay, is probably why his story turned out to be the most interesting of the lot. Even though Markus is presented as the savior and leader of the Jericho resistance; even though Kara is reenacting the Underground Railroad escape towards Canada.

I pointed out in the preview how the game seemed to be angling the android versus human war in a certain light, and the further I got into Detroit the more obvious that becomes. Writer and director David Cage isn’t too interested in exploring the sci-fi questions that advancing AI brings, only the struggles and brutality of inequality. Kara’s story made it clear that this was taking cues from history, and that discrimination is the actual subject at hand. I guess the developers did say the game was all about emotion.

That little revelation doesn’t detract from my enjoyment of the game. Rather, Detroit: Become Human is Quantic Dream’s greatest example of their storytelling format, the weaknesses and inconsistencies of Cage patched up and supported by strong, creative collaborations. There’s a writing team involved, multiple composers, and different directors of photography, all working to give the three storylines a unique look and sound. It’s honestly mind-boggling how, together with all the branching paths, that the entire production manages to be as cohesive as it is. Never mind that dialogue, tone, and subtlety aren’t the game’s strong points, but one step at a time.

Let’s talk about those branching path overviews. While it doesn’t spoil what the other outcomes in a scene may be, it’s fairly easy to infer what they could be; that’s just the nature of the beast so I won’t blame them for it. What I will gripe about is how this little report is displayed after every scene. I did find the feature cool during the previews and demo, but my stance on it changed once I got to the more emotionally charged moments. For a game that markets how “every choice matters” this certainly was effective at breaking immersion. Here I am wondering if a major decision was the right move, if a certain outcome could have been prevented, and along comes the game with its wrecking ball of a “spoiler”. It’s an important gameplay inclusion, but they should have just saved it for repeat playthroughs.

That said, replaying Detroit is something I’m a little iffy about, simply because what drives your interest in these characters and events is your investment behind your choices. Loading up a scene checkpoint just to unlock a scene or two feels like the bland, rote kind of trophy hunting. While there’s enough content for multiple playthroughs, and there are a sizeable number of endings and tonal changes among the characters, the entire act gets bogged down by the linear scenes. You’ll do the morally good route, the exact opposite of that, and some combination of the two, but I doubt the average player would meticulously chart their way towards unlocking every scene. And since there aren’t any character attributes to play around with like in an isometric RPG, I simply don’t see myself chalking up hundreds of hours with Detroit.

Honestly, I don’t mind that. The bulk of the game’s entertainment comes from its penchant for crafting thrilling, cinematic encounters, moments where you’re completely spellbound and pondering over your next move. The vague choices can be frustrating at times, I’ll admit, but they’re washed away by the genuine intensity certain scenes bring (I’m being vague too but, hey, spoilers). They’re the kind of moments that showcase the strengths of gaming and interactive fiction, injecting tension, fear, or suspense in a way that not many movies or books can hope to compare.

Whether you’ll enjoy playing Detroit: Become Human is more a matter of personal taste. Quantic Dream loves to incorporate interactions at the quirkiest or most mundane of times, but they’re decidedly less complex than Heavy Rain’s finger Olympics. And if you can’t be bothered about the analog stick wiggling and button mashing, there’s a simpler control scheme that lets you recline in your sofa and treat this like a Netflix binge. I think having the “Experienced” scheme makes for a more engaging experience, but what’s important here is that there are even options to begin with. But, as mentioned, don’t go in expecting to run-and-gun or pull of sweet combos — that’s just now how this studio works.

What they do excel at is pushing technology to the fore. Detroit: Become Human is gorgeous, the PS4’s power saved from rendering large open-worlds to instead drive deep into the uncanny valley with its realistic character models. Thankfully, the in-house motion and facial capture, together with the hand-finished animation touches, help to significantly lower the creepy factor. The quality isn’t consistent between all the characters, but the jump isn’t terribly jarring either — merely noticeable. Yet for overall visual fidelity, I could swear the review build looks better than the preview held a month earlier.

Just as impressive are the voice work of the actors, again going back to Quantic Dream’s advantage of having an entire mo-cap studio at their disposal. I have to bring up Connor once again, brought to life thanks to the amusingly deadpan delivery of Bryan Dechart. If there’s one downside to the motion capture, if it can even be called that, is that the animation isn’t as polished and exaggerated as, say, Naughty Dog’s works. The characters move realistically and smoothly, but in a gaming context does mean it looks a tad stiff. But that’s a minor nitpick in the face of the effort that went into the different camera approaches, color treatments, and music for each protagonist.

Detroit: Become Human is characteristically Quantic Dream, in that this exhilarating narrative on androids and racism is approached with equal parts grace and gaffes. With the scope blown up to a gargantuan scale, so too have the studio’s strengths and weaknesses been amplified, yet the team’s positive work on the latter has made this an experience worth remembering 2018 by. It’s as if Beyond: Two Souls never happened, and we finally got the improved follow-up to Heavy Rain. Now tap X to play.

Detroit: Become Human releases on 25 May for PlayStation 4.
Developed by Quantic Dream and published by Sony Interactive Entertainment.
A pre-release copy was provided for review.

Ade thinks there's nothing quite like a good game and a snug headcrab. He grew up with HIDEO KOJIMA's Metal Gear Solid, lives for RPGs, and is waiting for light guns to make their comeback.
Previous post Here’s your Battlefield V Reveal trailer
Next post Sample all 47 prefectures at Japan Park Singapore this August