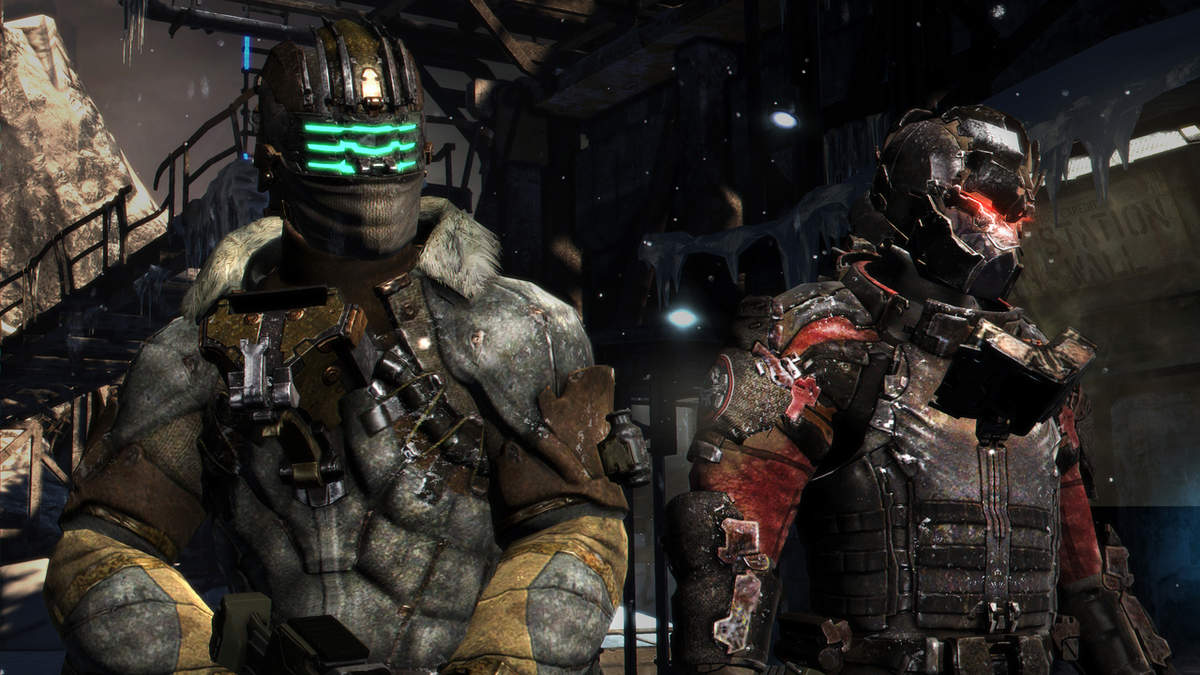 Issac Clarke returns this February in Dead Space 3 for another spine-chilling adventure. We take a look at the demo on Xbox 360.

Dead Space 3 is the second sequel of Dead Space series, the survival horror game franchise by EA. We find Issac Clarke crash-landing on a frozen ice planet Tau Volantis. Issac must return to his team and seek shelter from the frigid cold environment.

The game has you at the crash site and the game walks you through the basic controls and UI. Issac has the Resource Integration Gear suit on, effectively a on-person display of his health, ammunition and objective markers as you see him from a third-person view. I should point out that this is my first experience with the series, but I do know what to expect.

But I was wrong. Out of the foggy cold wind pounced a vicious clawing Necromorph. I barely got my gun ready when I was slashed several times before managing to pop its body to reveal its other three clawing spines. I got my composure back only to see another Necromorph wanting me dead.

The demo plays at Normal difficulty, so you still get access to quite a bit of ammo and health you stomp out of item crates and corpses. Stomping enemies after they scare you so really helps to ease the panic. The use of health packs is at a convenient button’s push away, which I found very useful. The other important thing I picked up were weapons parts, which the game describes for weapon creation or upgrades.

Continuing to my objective dragged me to my first quick-timed event where Issac must muster himself through a falling freight trailer before it tips over and crashes into the ravine below. Soon after, a potential base I saw could be my answer to getting shelter at last.

Reaching the facility, I had to help my newly found teammate on the upper level, but the lift had to be activated from the auxiliary room by the side. I found I wasn’t in a hurry because I took the time to use the suit changer and the new weapons bench the demo was talking about.

The Weapons Bench is a new feature in Dead Space 3, improving upon the weapons upgrade system from the two earlier games. It gives players the opportunity to create weapons using the aforementioned parts they find lying around as they play the game. Your weapons are essentially light or heavy weapons. Users of Team Fortress 2’s crafting system should feel at ease here as you can change and upgrade your weapons here at your leisure, or make use of blueprints to build predetermined weapons. Another new feature easily looked over at is the new cover system, not present in the first two games.

I souped up my lighter weapon with a stasis module for the totally unexpected mini boss that was up ahead, because the elevator ride was simply too calm, and now I had to defeat a giant crab spider. Issac has to take out it’s glowing weak points, like most of the Necromorphs in the game, which is easier said than done, so it was a good thing I had the stasis module on, which slowed the bug down a bit enough for me to knock out with my heavier weapon.

The remainder of the game involved me navigating the insides of the facilities to find that I’m not alone. Other human enemies, the rest of the Necromorphs and a rogue mining drill now want me dead, but that wasn’t going to happen (although I did… die a few times).

I won’t spoil the ending, although I did ruin most of it here. But the demo is still worth a go. Drop-in/drop-out local co-op is available but wasn’t tested. Download it off Xbox 360 and PlayStation Network Store on 22nd January, folks can get a chance at early access on Xbox 360 by signing up with your Origin account on demo.deadspace.com.

Previous post Sam Fisher Hunts For More Bad Guys in Splinter Cell Blacklist
Next post aL EventPotion Qualify For Sao Paulo, But How Are They Getting There?