Creative Sound BlasterX Vanguard K08 and Siege M04 review: Getting a piece of the gaming pie 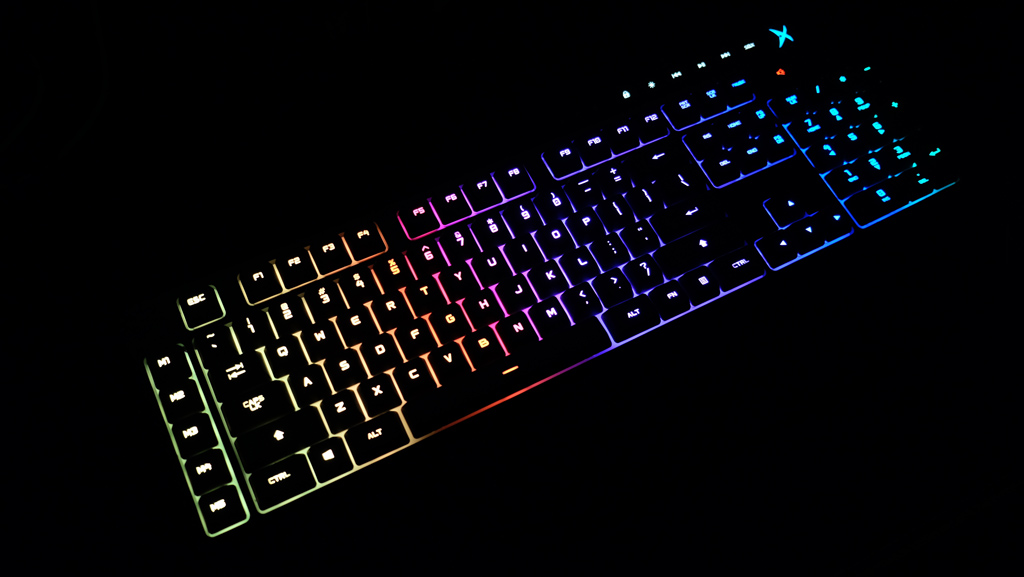 Creative is still first and foremost an audio company, with a wide range of sound cards, speakers, and headphones. Its Sound Blaster line has long been synonymous with audio products, but that isn’t quite the case anymore.

The Singapore company has now released its first ever keyboard and mouse under the Sound BlasterX name, a branding that has since been reserved for its gaming-oriented headphones. But while the Sound BlasterX Vanguard K08 keyboard and Siege M04 mouse have nothing to do with audio, it looks like Creative has decided to house all its gaming products under the same name instead of complicating matters by creating a new series of gaming accessories.

Creative has surveyed the market well here, and a quick glance at the specifications sheets show two very competitive products that hold up well against its rivals. This includes things like per-key RGB lighting and mechanical switches on the Vanguard, and a PixArt PMW3360 optical sensor (probably the best one on the market now with no acceleration or jitter) on the Siege mouse.

They cost S$269 and S$119 respectively for the keyboard and mouse, which while not cheap, is quite in line with what the competition is charging. For instance, the Razer’s BlackWidow X Chroma costs slightly more at S$279. The Vanguard K08 is designed to be a premium offering in a crowded market. Creative has dispensed with the more common Cherry MX mechanical switches in favor of its own Perceive-React-Execute Switches, or PRES, which it developed together with Japanese switch manufacturer Omron. These are rated for a total of 70 million key strokes, compared to the 50 million on Cherry MX switches.

One of the main selling points of these switches is the shorter actuation and travel distances – 1.5mm and 3.5mm respectively – which Creative says helps reduce key response times and enables you to perform more actions per minute. This compares to the 2mm and 4mm on the more familiar Cherry MX switches, but we’d stop short of saying for sure that this really translates into a tangible benefit.

Either way, this is actually in line with what other brands have done with custom gaming switches. For instance, Razer’s own Green, Orange, and Yellow switches and Logitech’s Romer-G also boast shorter travel distances.

The shallower travel distance is quite discernible, and the keys do feel different from Cherry MX switches. PRES switches are linear, so there’s no tactile bump mid-way, and their closest Cherry analog would probably be the linear MX Red switches. Both of them share the same 45g actuation force, but the PRES switches can still feel a little mushier.

In addition, these switches look identical to Logitech’s Romer-G switches, found on keyboards like the G910 Orion Spark and co-designed with Omron as well. Their most prominent feature is the surface-mounted LED that sits dead center of the switch, allowing light to shine up directly through the keycap. This allows for brighter, more even illumination, something that Creative has taken full advantage of with the Vanguard K08.

In fact, Cherry didn’t have a switch that offered something similar until its MX RGB switches, which only ended up being tied up in an exclusive deal with Corsair.

But while the better illumination is all well and good, one drawback is the fact that they won’t be compatible with most aftermarket keycaps, the majority of which are designed for Cherry MX stems. If you do get one of these boards, you’re pretty much stuck with the stock keycaps. Still, these have a matte finish, which we definitely prefer over glossy keys. The cylindrical profile of the keys is also a lot easier to get used to than that on Logitech’s G910 Orion Spark, with its angular keycap sides.

However, one thing we noticed is the presence of key pinging on some of the larger keys like the Enter and Shift keys. It’s not a big issue, but it may end up annoying certain folks who expect consistency in feedback and sound across all the keys.

The keyboard comes with a row of five macro keys on the left and dedicated media controls, including a volume wheel, on the top right. These sit on a strip of glossy plastic, which contrasts with the matte finish on the rest of the board. That section can make for quite a fingerprint magnet, but we’re just thankful Creative didn’t apply the same treatment to the rest of the board.

Despite its plastic frame, the keyboard feels quite solidly built, with no discernible flexing to it. Eight rubber grips on the bottom help ensure the board won’t slide around, but we’d have liked to see Creative include some rubber on the keyboard feet as well. The feet can also feel a bit flimsy, and sliding around the keyboard too much often ended up with one or both feet folding back up.

The keyboard comes with a detachable plastic wrist rest and a USB passthrough where you can connect your mouse or some other peripheral. The wrist rest is attached using rudimentary hooks, and while it’s secure enough for the most part, it doesn’t feel quite as good as a magnetic connection would.

Creative’s Sound Blaster Connect utility is where you go to customize your own personal light show, and what a show it is. You’ll have a choice of 16.8 million colors for each key – you can set a custom color for the WASD key cluster for example – and quite a wide selection of preset lighting effects. There’s even the option to select the beats per minute, which changes how quickly the rainbow runs across your board. In addition, the white backplate below the keys helps the lights and individual colors stand out.

However, at the time of writing, there is no way to individually program the macro keys in the software, although you’ll be able to assign them to specific controls in game. That falls short of the functionality offered through the driver on some other keyboards – you won’t be able to set launch shortcuts for specific programs for instance – but because the current version of Sound Blaster Connect is still in beta, we may see this ability added later on. (Update: A spokesperson from Creative has since confirmed to us that a software update will be available later this month that will allow macro keys to be programmable for both keyboard and mouse) 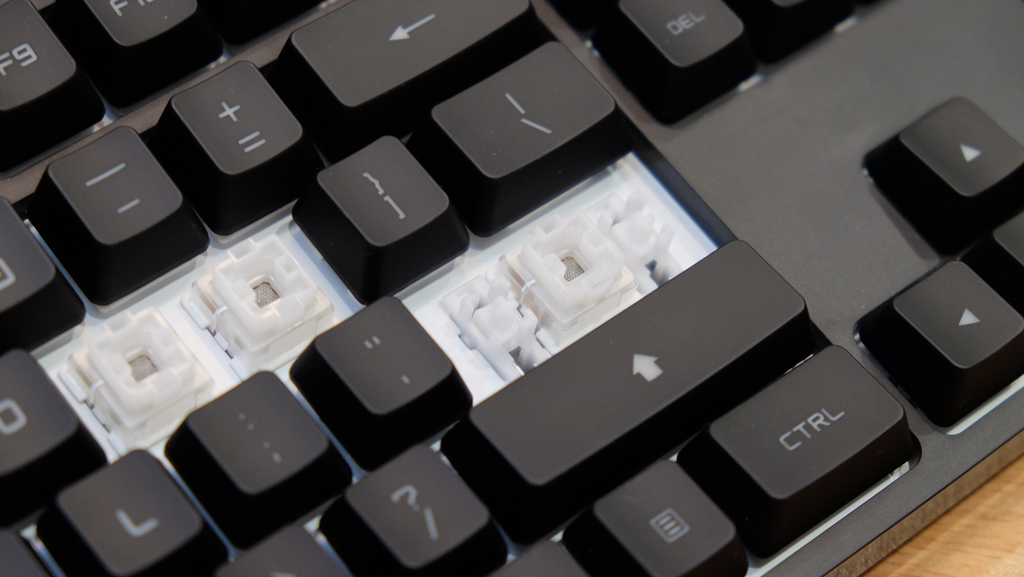 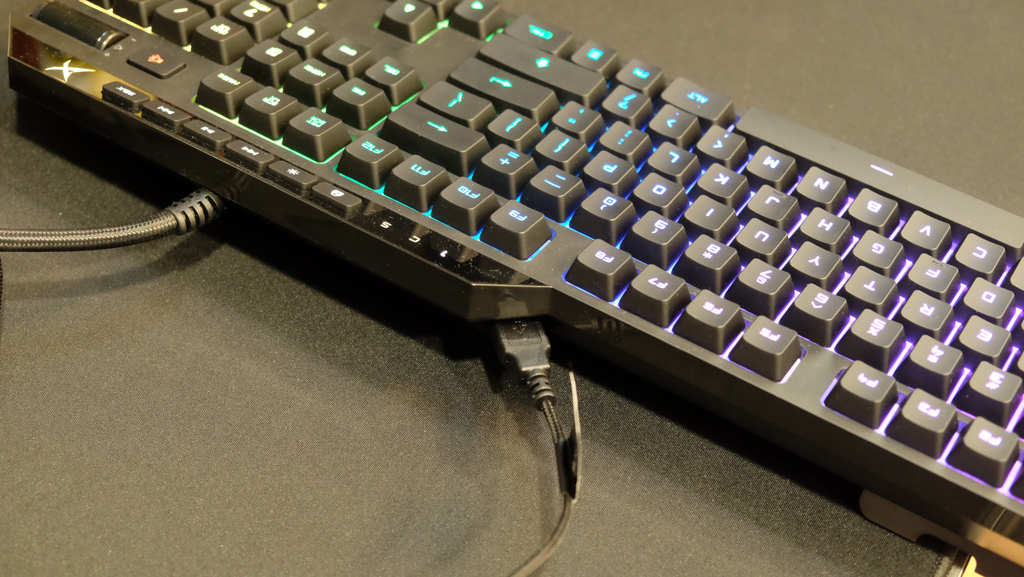 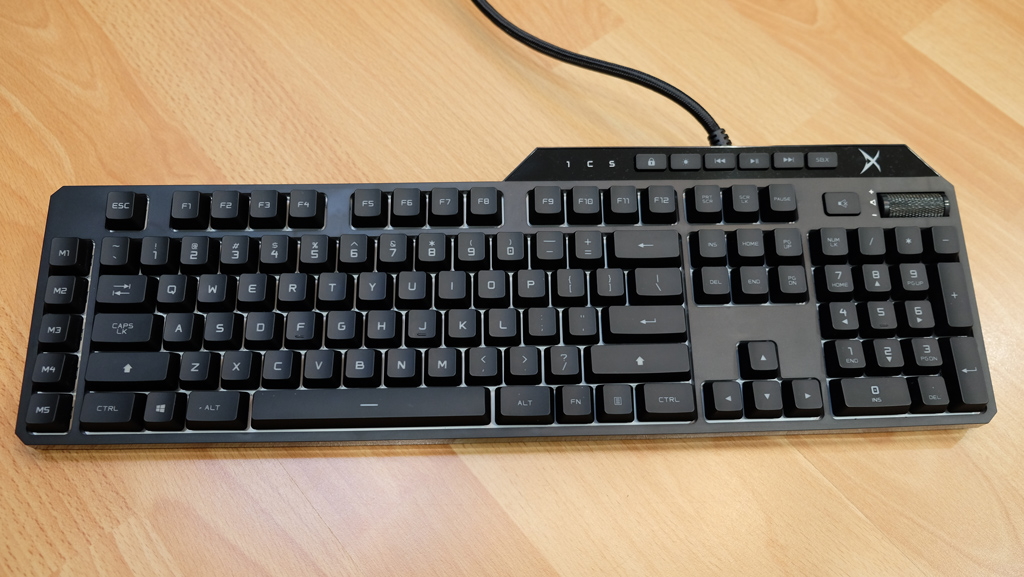 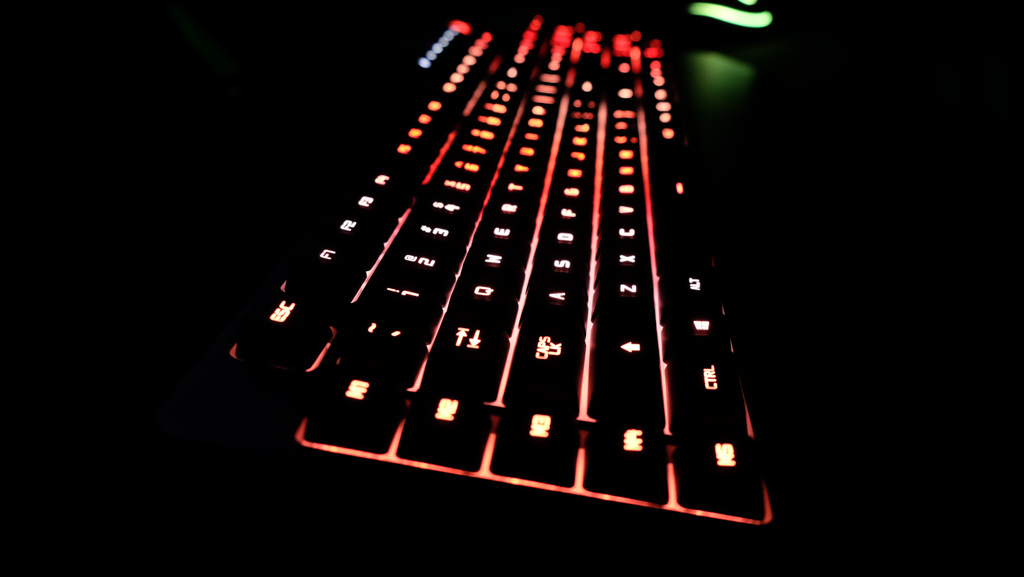 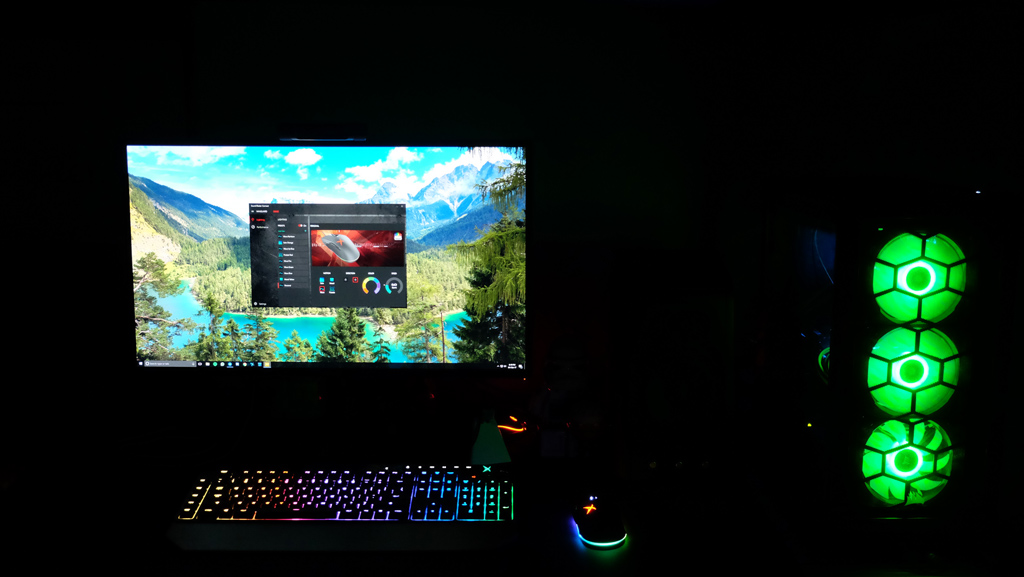 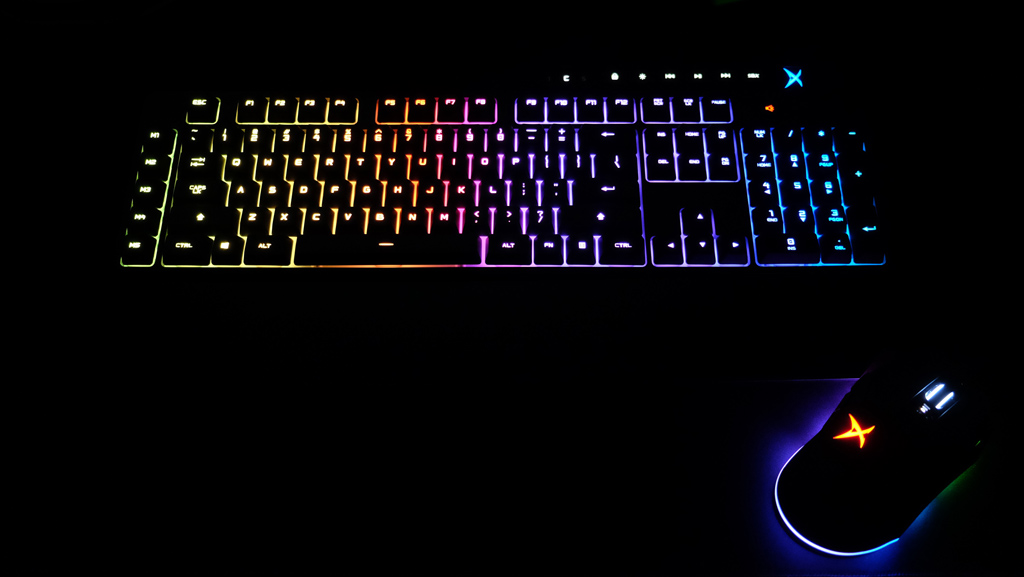 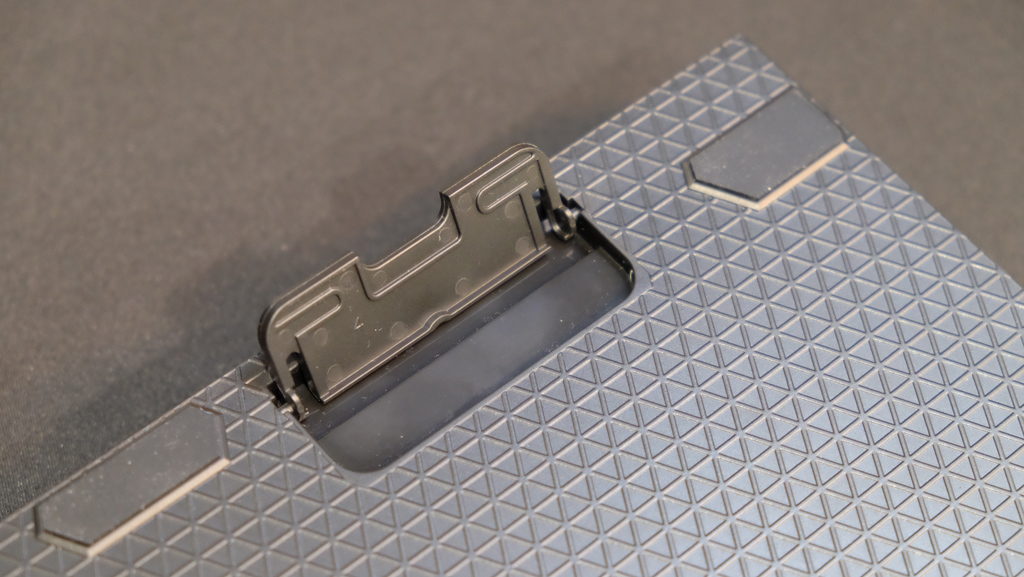 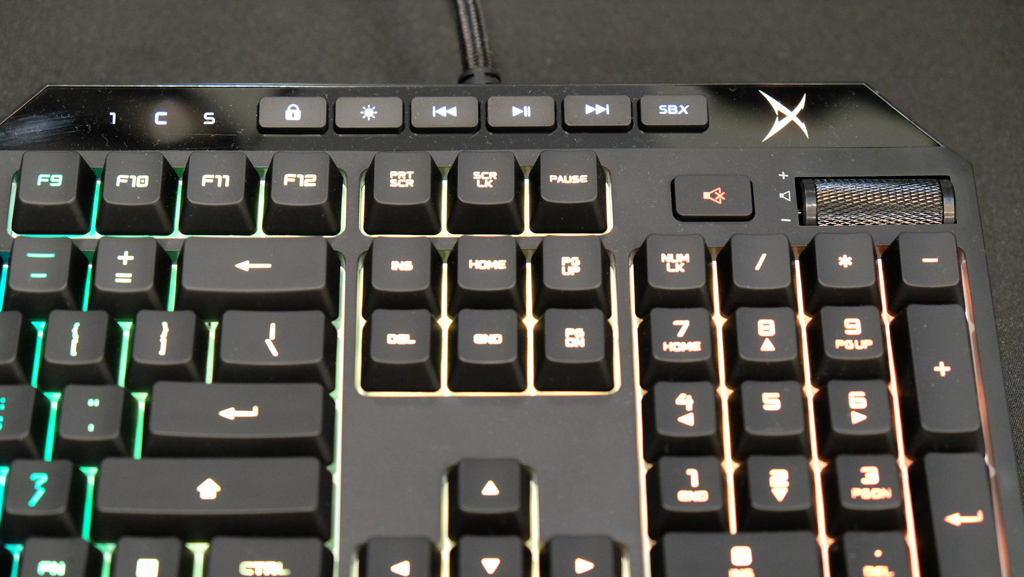 The Sound BlasterX Siege M04 mouse shares a similar design ethos with its keyboard counterpart. This means a focus on features and RGB lighting, and the mouse comes with a fancy LED light strip that runs all the way round its bottom.

This makes for one of the nicer LED effects we’ve seen on mice so far, and it’s eye-catching without being excessively gaudy. You can customize the effect using the same Sound Blaster Connect software as the keyboard, and they both share the same selection of lighting effects.

The mouse is equipped with a 12,000DPI PixArt PMW3360 optical sensor, which is the same as that found on mice like the SteelSeries Rival 700. We’ve had very good experiences with this sensor, thanks to its lack of any acceleration or jitter whatsoever, so tracking integrity is going to be the least of your problems with the mouse.

That said, it’s worth mentioning that this appears to be a mouse designed for medium- to large-sized hands. The sniper button is located quite forward on the left edge, and you won’t be able to reach it easily unless you have large-ish hands. This button has the effect of lowering the DPI on the fly, so you can hit high precision shots more easily (in theory that is).

This is a mouse suited to both palm and claw grips, but its longer shape may prefer the former slightly. This is also an ergonomic, right-handed mouse, and the forward and back buttons are located above the sniper button on the left side.

Both sides of the mouse feature rubber grips that seem like they’ll hold up well even after long hours of use, while the rest of the mouse sports a matte finish that resists dirt and grime quite well.

The left- and right-click buttons use Omron switches, and they’re surprisingly springy. There’s nice feedback on the side buttons as well, and everything feels quite well put together. Each notch on the scroll wheel also feels very well-defined, further contributing to the overall impression of quality.

The DPI toggle button sits below the scroll wheel, and you’ll have the option to switch between three pre-defined DPI levels that are indicated by the three-step LED indicator above it. The mouse features onboard memory, so your settings will carry over should you use the mouse on another PC.

However, one odd thing is that despite marketing the mouse as having seven programmable buttons, Creative also doesn’t allow rebinding of the buttons through the Sound Blaster Connect software. Instead, as on the Vanguard keyboard, you’re just limited to assigning them to your preferred controls in game.

Still, one nice option is the ability to set the lift-off distance to either 2mm or 3mm, although most people will probably just opt for the lower one.

The large mouse feet at the bottom provide quite a smooth glide, and Creative has included a set of replacement feet should you need to change them.

At S$119, the Siege is quite a good option for anyone in the market for a new gaming mouse. Just make sure you don’t have tiny hands, and you’ll be good to go. 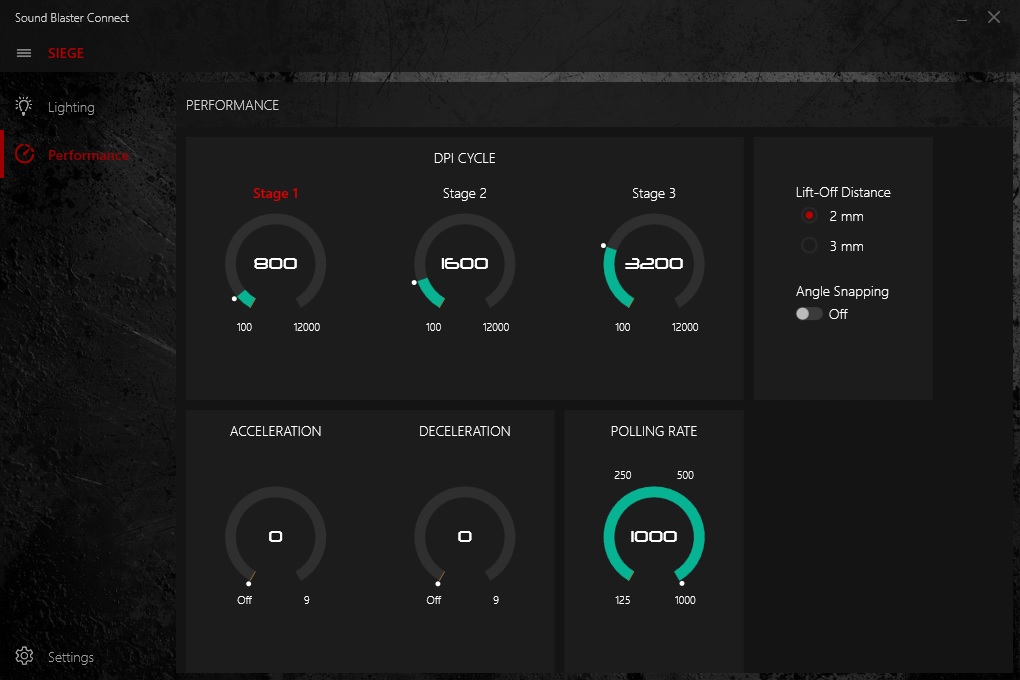 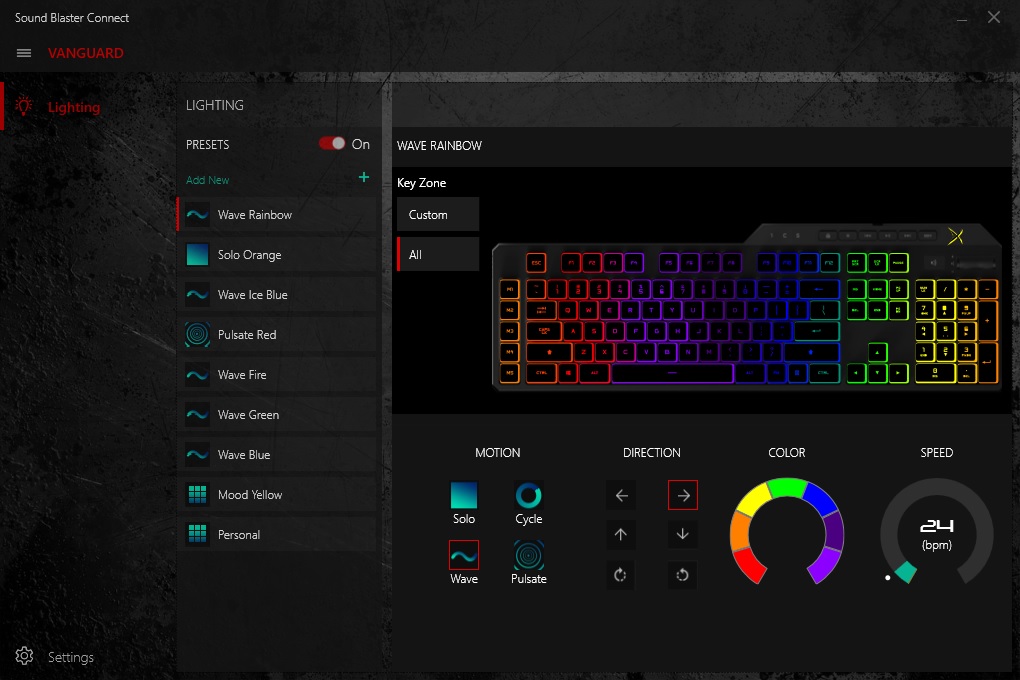 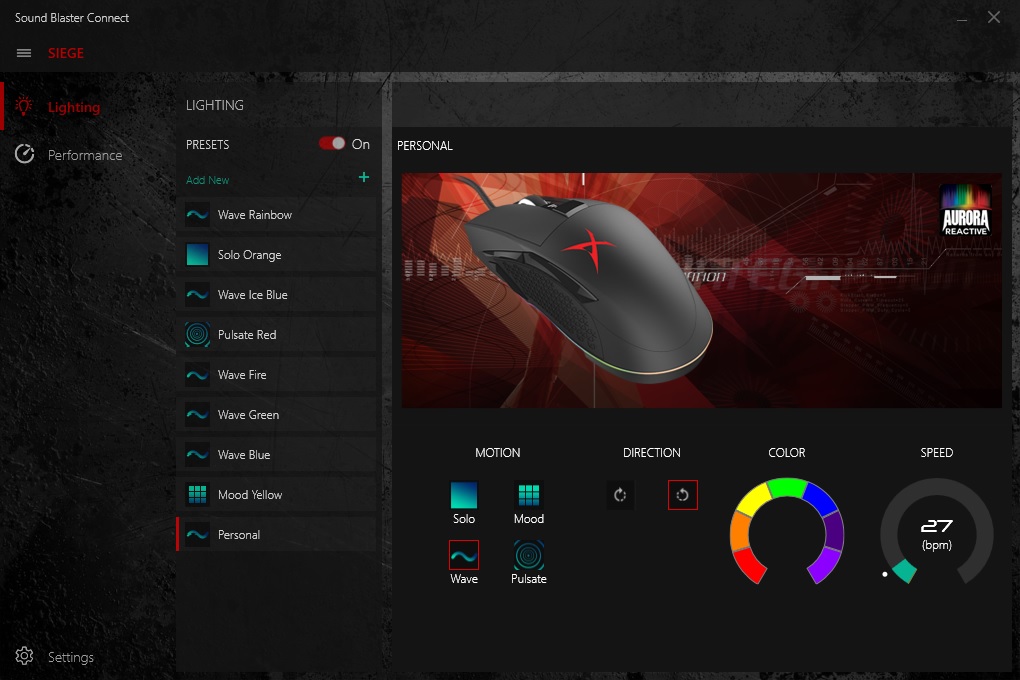 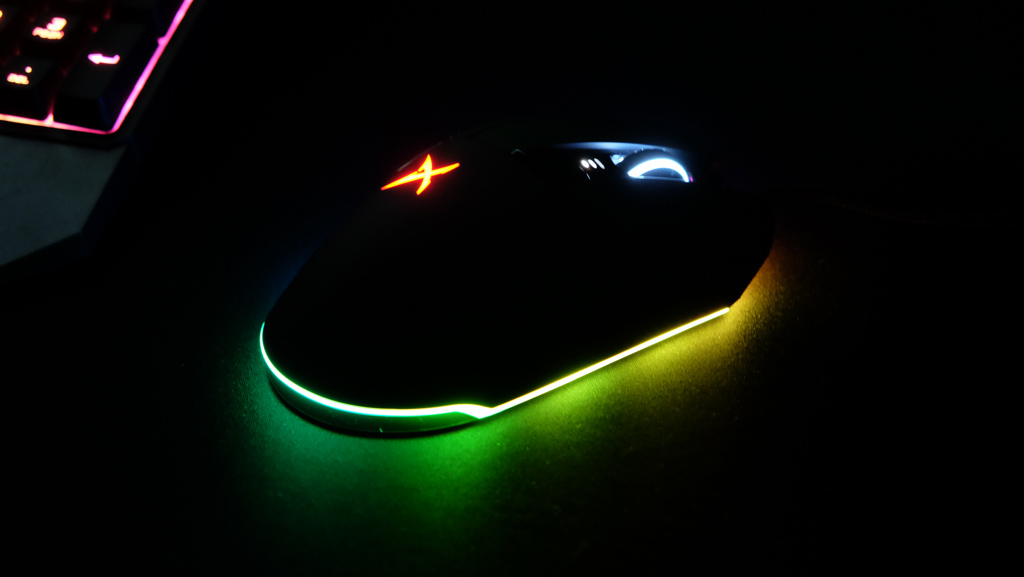 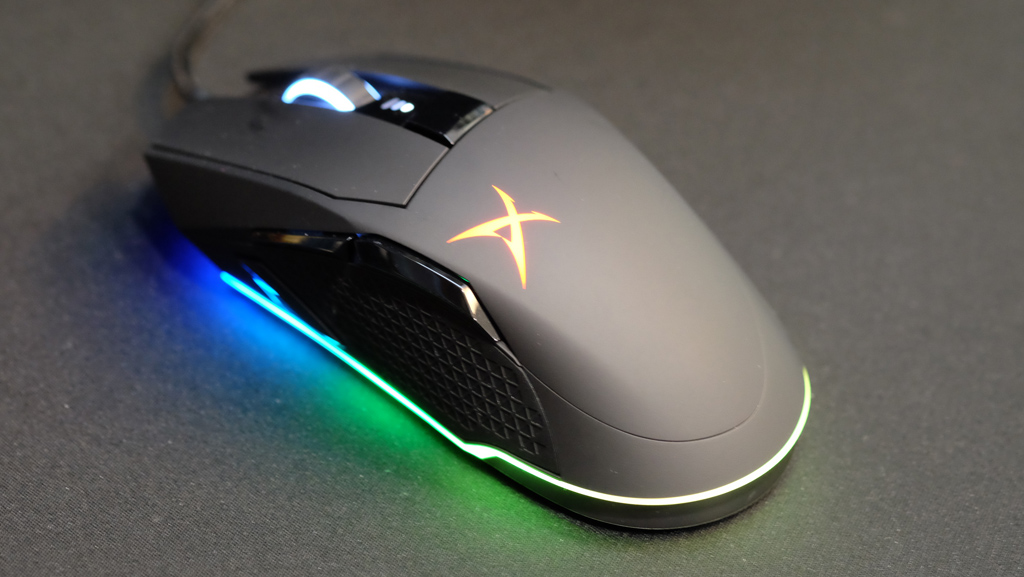 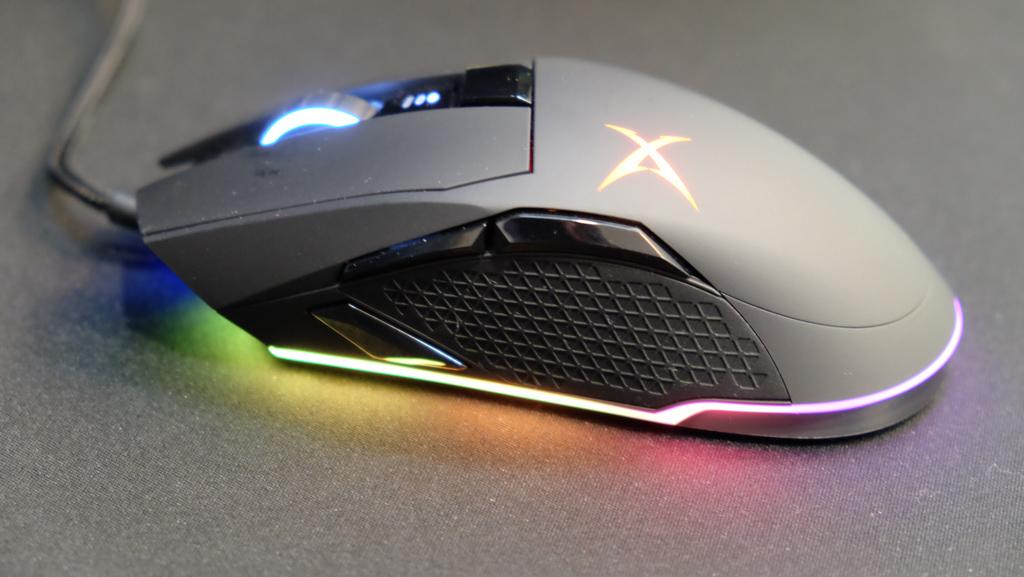 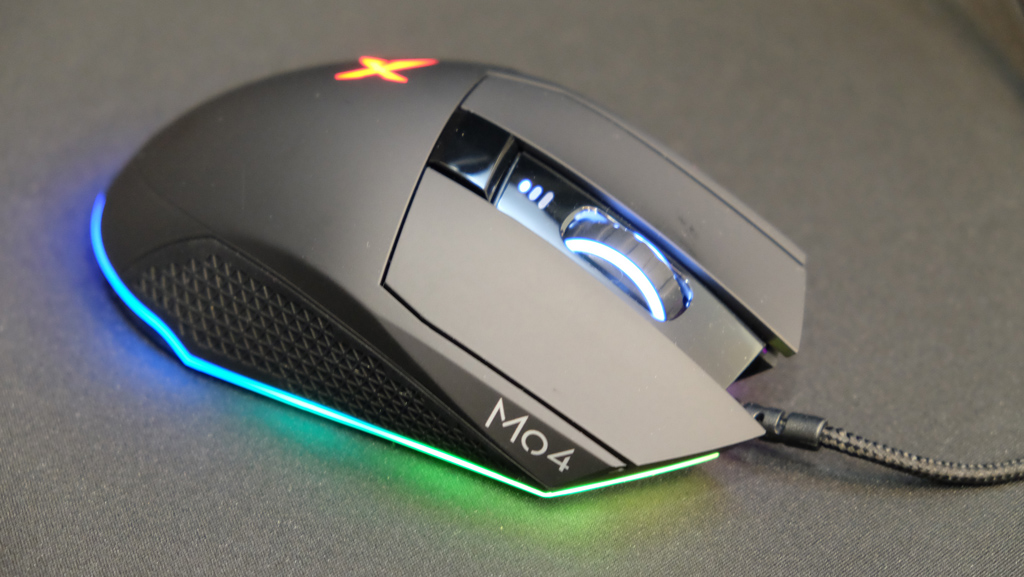 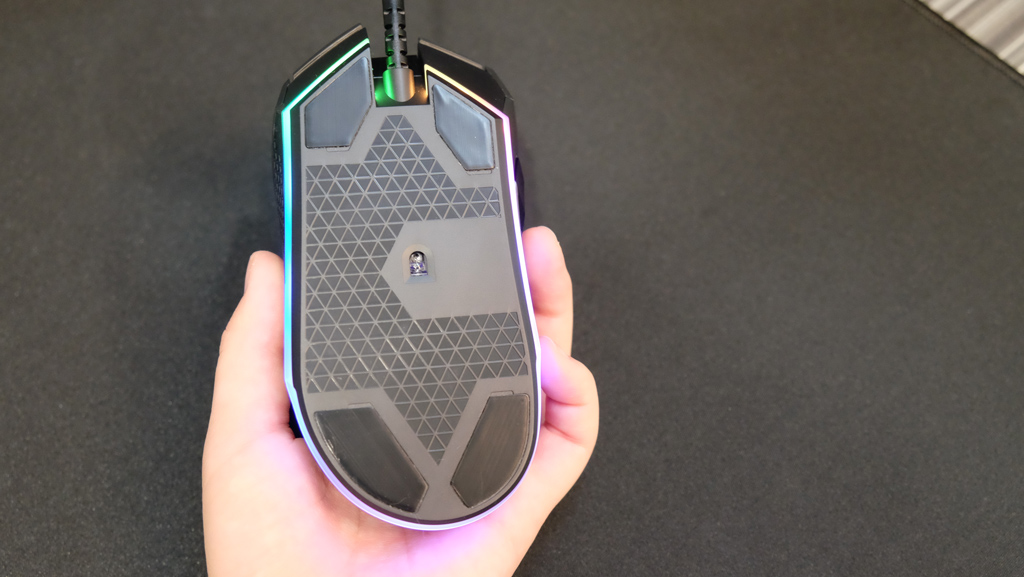 Squee delights in trash talking on Overwatch and sleeping till 5pm on weekends. Few other things matter, except perhaps the next episode of Game of Thrones.
Previous post GameAxis Giveaway: Mafia III & ASUS ROG Sheath
Next post Team Faceless will represent SEA in Dota 2 Asia Championships 2017