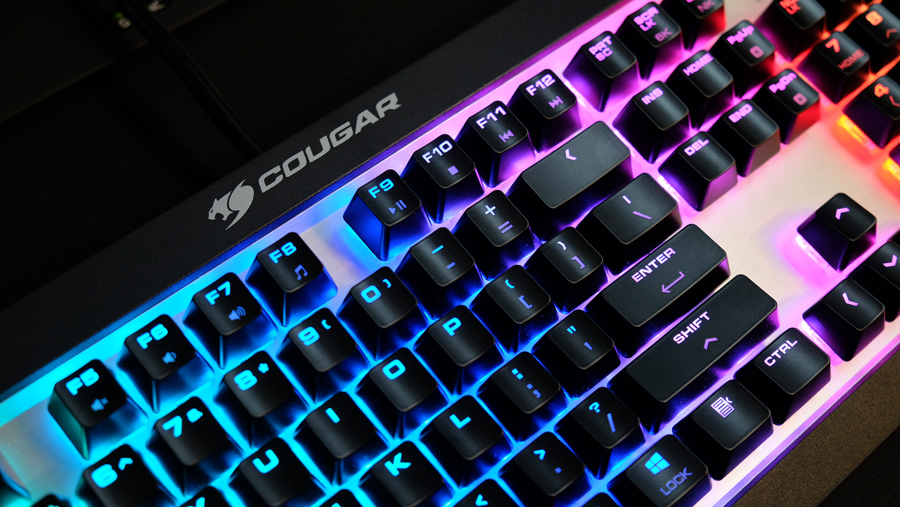 The Cougar Attack X3 RGB gaming keyboard and Revenger mouse were both designed for the frugal gamer. Gaming hardware and gear often come with a hefty price premium, no thanks to bells and whistles like additional macro buttons and customizable RGB lighting effects.

It’s then nice to see German manufacturer Cougar try to provide feature-rich offerings at a more affordable price, the better to cater to gamers operating on a tighter budget. Not everyone is willing to pay over a couple hundred dollars for a keyboard and mouse combined, and they probably shouldn’t have to. Our review unit of the US$99 (the street price is actually lower) Attack X3 RGB features Cherry MX Red mechanical switches, and differs from the Attack X3 only in terms of the availability of RGB lighting. As a linear switch with an actuation force of just 45g, Red switches are one of the lightest to operate, but whether or not you like them is very much a matter of personal taste.

Those who do a lot of typing on their keyboards may prefer something a little stiffer or with tactile feedback, but MX Reds make quite a good switch for gaming nonetheless. That said, if you’re used to heavier switch types, it’s possible you may find yourself accidentally activating keys you don’t mean to as you get used to Reds.

Cherry MX RGB switches were first unveiled in 2013, but remained a Corsair exclusive for one year. That arrangement has since expired, which is why other manufacturers have now begun implementing MX RGB switches on their keyboards.

These switches feature a clear switch housing and a lens that transmits light from RGB LEDs mounted directly on the surface of the PCB. This supposedly allows for brighter and more even illumination than a single LED located outside the switch. However, we noticed that certain keys with double legends – such as the F5 to F12 keys with secondary media controls – were still unevenly lit, so it’s not like this is that big of a game-changer.

To our eyes, the RGB illumination was bright enough, but not particularly brilliant. We’ve seen more impressive solutions from the likes of Creative and Razer as well, so the quality of lighting is not the Attack X3 RGB’s distinguishing feature.

It’s by no means poor however. If there’s one improvement, it’s that the transparent switching housing allows the light to spill out more around the keycap for an effect that goes well with the floating-key design.

Furthermore, you can look forward to customizing it in Cougar’s UIX software. Three different lighting effects can be programmed at any one time, and there are six presets to choose from, with familiar names like rainbow, ripple, and reactive. Pressing Fn + F4 lets you cycle through the three effects that you chose, so you don’t have to launch the software to switch things up. In addition, you can move between four different levels of brightness using the Fn + PgUp/PgDn keys or in the driver itself.

On top of that, the Cougar UIX software offers per-key LED customizations and the ability to tweak various aspects of the original presets, such as the direction or speed of the wave effect. The only drawback is the interface, which can feel a bit dated and clunky.

The keyboard itself can also be programmed with up to three different modes, with each mode having different key bindings and lighting effects. Each mode is bound to the F1 to F3 keys, so you can switch to them on the fly when holding down the Fn key. And while there are no dedicated macro keys, each key can be reassigned to a custom command, so you could reprogram less frequently used keys such as select ones on the numberpad.

Build quality is decent with little flex to the body, but the mostly plastic construction means that the keyboard doesn’t have the heft you’d expect from a full-size model. The brushed aluminum faceplate helps spruce things up, but the board ultimately doesn’t have the same weighty reassurance as its pricier counterparts, which means it can feel a little cheap.

One final thing to note is the non-standard bottom row. The Fn key sits where the left Windows key usually would, and the right Windows key can be deactivated by holding it down together with the Fn key.

The US$60 Cougar Revenger mouse shares a similar design ethos as they Attack X3 RGB, with most of the features you’d expect from higher-end mice but without the price premium. This means things like customizable RGB lighting, programmable side buttons, and also on-the-fly DPI switching.

It utilizes the excellent 12,000DPI PixArt PMW3360 optical sensor that tracks flawlessly, so performance shouldn’t be something you worry about. There’s also the option to set the lift-off distance in the Cougar UIX software, but most people will probably choose to leave it set to low.

This is a large-ish  mouse that is best suited to the palm grip because of its rather wide base (70mm at the widest point), and its shape is actually based on the older Cougar 550M mouse. It  has an ergonomic shape for right-handers that curves inward around the middle for a more natural grip, although the back of the mouse can feel a tad too broad at times. When tightening our grip around the middle of the mouse, it could sometimes feel like its broad back was just getting in the way.

The mouse uses mechanical Omron switches, and there’s good feedback to the left- and right-click buttons. However, the scroll wheel can feel a tad bit mushy, and we’d have preferred to have more resistance and more well-defined notches.

In addition, there are two side buttons on the side, which are quite large and easy to reach. A three-step DPI indicator sits on the left as well, and you can customize their color and lighting effects in the Cougar UIX software. These tweaks are independent of the illuminated Cougar logo on the mouse’s main body, and the software will let you program different lighting effects for both.

The selection of effects isn’t quite as comprehensive as on higher-end mice, and the interface once again isn’t that intuitive (it’s not clear at first glance what certain options do without applying them), but that’s just a trade-off you’ll have to make for an otherwise affordable and feature-rich mouse.

You can also switch between different sensitivity levels on-the-fly using the button below the scroll wheel. The button implementation is interesting, and it is more a lever that you pull backwards than an actual button. As it turns out, this actually makes it more natural to operate, as sliding your finger off the left-mouse button instantly gives you access to it.

We’re glad that there’s no glossy plastic to be seen around, and the rubber grips on the sides minimize the build up of dirt and grime after long hours. Overall, this feels like a very solid mouse, and there’s no reason to think it won’t stand up to long hours of abuse.

All in, the Cougar has made two rather affordable products that make an effort to include features more commonly found on pricier competitors.

The Attack X3 RGB pairs its customizable RGB lighting with useful add-ons like on-the-fly mode switching and media controls, and it is a decent option for a budget gaming keyboard. Similarly, the Revenger mouse packs a class-leading optical sensor and the expected side buttons and DPI toggle, all of which are pretty standard features on many mice today. It doesn’t stand out, but it doesn’t lose out either, and it can hold its own against many more expensive alternatives.

Squee delights in trash talking on Overwatch and sleeping till 5pm on weekends. Few other things matter, except perhaps the next episode of Game of Thrones.
Previous post Hey! Listen! Materia Collective’s ‘Hero of Time’ now taking pre-orders
Next post LEGO Worlds (PS4) Review – Not Everything is Awesome