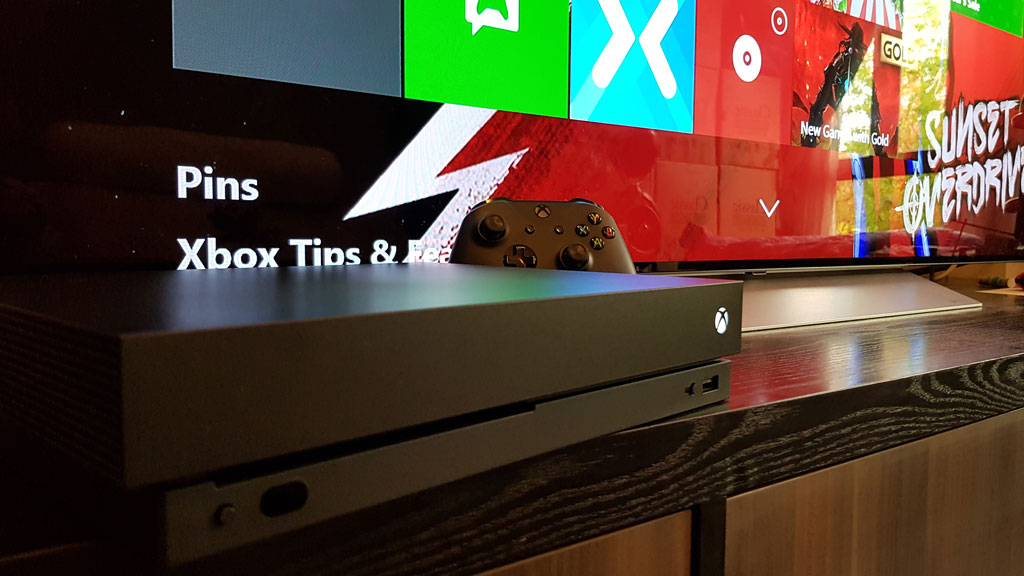 Microsoft claims the Xbox One X to be the most powerful gaming console on Earth, and from a technical standpoint they are absolutely right. But is it enough to win the hearts and minds of Asian gamers this Christmas and beyond?

I spent 30 days with the console to find out.

It is a powerful little black box

The Xbox One X is a substantial upgrade to the original Xbox One, which was released in 2013, and comes almost exactly a year after Sony delivered a somewhat similar performance boost with its PlayStation 4 Pro. It contains 6 TFLOPS of power from an AMD Radeon GPU, features 12 GB of GDDR5 RAM and is using a 2.3GHz 8-core AMD Jaguar processor. That’s nearly two teraflops more than the PS4 Pro, a faster CPU, and 3GB more of overall RAM. The Xbox One X comfortably outperforms the PS4 Pro. On hardware alone, it’s smaller, more powerful, and even includes a 4K Blu-ray player over its PS4 Pro rival.

The Xbox 360 and Xbox One had its fair share of catastrophic (the former) and terrible (the latter) designs, but the Xbox One X looks like a fitting redemption for Microsoft’s design and engineering teams. When compared to the PS4 Pro’s design, the Xbox One X with all the power inside is quite mind blowing to be honest (Ed’s Note: It’s also worth noting that Microsoft have been building solid PC hardware over the past couple of years too).

That external storage drive will come in handy. Read on.

The PS4 Pro brought along with it 4K (sort of) and HDR gaming, but the real promise of the Xbox One X is “true 4K” gaming and HDR. The icing on the cake? Microsoft has also claimed that the One X can run true 4K at 60fps, something which is only possible in the realm of high-end PC gaming. The Sony console simply does not have the horsepower to render native 4K at 60fps, and display something closer to 1440p or 1800p depending on the game developers. That’s quite a lot less detail than 2160p or true 4K. So the Xbox One X is quite possibly the most powerful, and cheapest

But here comes the complicating part about existing Xbox One games. Most of them are designed for 1080p resolution and not true 4K, so the benefits that come with the Xbox One X’s power depend on what game you are playing. Microsoft has promised more than 150 “enhanced” games for the Xbox One X (you can find the list of games here), but that doesn’t always mean they will support true 4K. Similar to how Sony let game developers decide on how they could best make use of the additional power available on the PS4 Pro, some of these “enhancements” on the Xbox One X could simply be better frame rates instead of 4K resolution, or HDR capability. Other enhancements might include a combination of 4K, HDR and improved frame rates. There isn’t a hard rule imposed on game developers to add true 4K textures to their Xbox One games.

This isn’t necessarily a bad thing however, as some older Xbox One games look absolutely gorgeous with their new 4K Ultra HD coatings – such as Far Cry 5, Fallout 4, and Dishonored 2 – and are worth revisiting them. Then some games like Gears of War 4 and Rise of the Tomb Raider (yes still old games) also allow players to choose between a 60fps performance-focused mode or 4K with HDR mode. These games look great at 4K fidelity, but running them at 60fps on a console was a refreshing experience for me. Everything just seems more ‘buttery’ smooth, and for someone like me who plays games on PC frequently, this is remarkable. When game developers start allowing gamers to choose between resolution or frame rates enhancements for their console games, truly the line between PC and console games will get even more blur.

Then there are first-party titles like Forza Motorsport 7, that offers the best of all three worlds with true 4K, HDR and running at 60fps. Activision’s Call of Duty: WWII, another “Enhanced for Xbox One X” title, comes very close to looking like it does on my PC (running at 4K with 2x GeForce GTX 1080 cards in SLI mode) thanks to the textures improvements and 60fps support too. These two games are the pinnacle of the Xbox One X’s prowess, and both look stunning on my LG OLED C7 with HDR enabled.

I’ve also come to realized that while true 4K delivery was remarkable, of equal importance was playing games on consoles at 60fps. Once you have tried a game in 60fps, it’s hard to go back to 30fps, regardless of resolutions and textures. I have also tried Destiny 2 on the Xbox One X and experienced noticeable frame rate improvements too, even though the game is locked at 30fps. I get the feeling that developer Bungie is keeping 60fps exclusively for the PC version of the game for the time being.

But these games that I have played, and kindly provided by Microsoft, also exposed a glaring weakness of the console; there just isn’t enough killer first-party 4K Ultra HD games for it.

Call of Duty: WWII and Destiny 2 aren’t exclusive to the Xbox One X, and even first-party games such as Gears of War 4 and Forza Motorsport 7 are not exactly the type of marquee console launch titles most of us want. You can even argue that the last two games can also be played on a Windows 10 computer, anyway. There’s no blockbuster game that I can play on the Xbox One X, and I can’t think of one that I look forward to playing in the near future either.

Let’s look at it this way. The PS4 Pro may not be the most powerful console on Earth, but it will have exclusive games like the new God of War, Spider-Man, The Last of Us 2, and even Metal Gear maestro Kojima’s new and weird Death Stranding all coming for it. Make no mistake, these are the type of heavyweights that excite gamers and make them hang on to their PS4, or better still, buy a new PS4 Pro. These games sell consoles.

What’s Microsoft’s first-party lineup like for 2018? Quite paltry to be honest. Crackdown 3 is delayed, and the much hyped Scalebound and Fable Legends were canned. PlayerUnknown’s Battlegrounds is only a timed exclusive and is not a matter of if but when it comes to the PS4. There is no new Halo game, and the franchise has also taken a beating from fans with its last outing. Simply put, there isn’t that one game I can imagine anyone will buy an Xbox One X to play on, in the same way Legend of Zelda: Breath of the Wild did for the Nintendo Switch, or how Horizon: Zero Dawn spurred some PS4 gamers to upgrade to the more powerful PS4 Pro.

Speaking of “enhanced” games. The Xbox One X comes with 1TB of storage space, but I highly recommend buying an external drive for it. This is because Xbox One X games enhanced for it are significantly bigger, easily doubling than the standard Xbox One titles, which are usually between 40-50GB. After installing games like Call of Duty: WWII, Assassin’s Creed: Origins, Gears of War 4, Forza Motorsport 7, all of which come with larger 4K texture files, and I’m left with just less than 300GB of storage space. Downloading these games off the Xbox Store also meant you’d need a fast Internet connection, or you’ll be faced with a rather long waiting time.

Yet it is an excellent good media center

But games aside, the Xbox One X is also a media center, and an excellent one at that. It supports native 4K Blu-ray playback with Dolby Atmos and HDR 10 (strangely, no Dolby Vision) supported, and it’s something that the PS4 Pro completely lacks. This also makes the Xbox One X a remarkably value-for-money high-end Blu-ray player. Microsoft also sent a copy of Planet Earth II for my Xbox One X review, and watching it on the LG OLED C7 TV was jaw-dropping. I can appreciate how gamers who are also 4K Ultra HD Blu-ray collectors will be happy with not having to purchase an additional standalone native 4K Blu-ray player.

Streaming media apps such as Netflix on the console also worked wonders and it was nice to see episodes of The Punisher and Stranger Things 2 looking amazing and play with ease. My only small jibe is that the LG OLED C7 has a built-in Netflix app, which is seemingly superior, as it also supports Dolby Vision. So, while it makes more sense for me to play Netflix and even Hulu straight from my LG TV, it might not be so for you if you own another brand of Smart TV that only supports the standard HDR 10.

A powerful console that needs more from Microsoft

Microsoft set out to build the most powerful gaming console and they succeeded; the One X does offer the best graphics currently available on a console. But you do need a 4K TV, and preferably one that supports HDR, to tap into these powers. And at S$699, native 4K gaming is finally a reality for the common gamers, which used to be only possible with expensive high-end PC gaming hardware. Consider this, the bare minimum to play PC games at 3840 x 2160 (native 4K aka 4K Ultra HD) requires an NVIDIA GeForce GTX 1080 graphics card, which already cost more than the price of the One X. Factor in all other necessary components, and a good 4K-capable gaming PC will set you back by S$3,000 at least.

The only problem that with the Xbox One X is games, games and games. Microsoft’s first-party library has a long way to catch up to Sony’s in this regard. We can only hope for some surprises from Microsoft Game Studios at this year’s E3, but it will be a missed opportunity nonetheless, by the company to continue the launch momentum in this part of the world.

But if you don’t care about Sony’s exclusives, then the Xbox One X is the best console to play all the third-party games today and in the coming months. If your primary console is the original Xbox One or One S and have a 4K TV, this is going to be a nice upgrade as well. Microsoft did an excellent job with the Xbox One X, but it now needs to deliver on the games. And quickly.

The Xbox One X was reviewed with the LG OLED C7 Television.

Aaron Yip is an industry veteran with more than 15 years of experience. When not spending time on his gaming PC and consoles, he can be found in Hyrule solving ungodly puzzles and collecting gems.
Previous post Dissidia Final Fantasy NT tournament scheduled for 18 Jan
Next post Monster Hunter: World for PC coming Autumn 2018