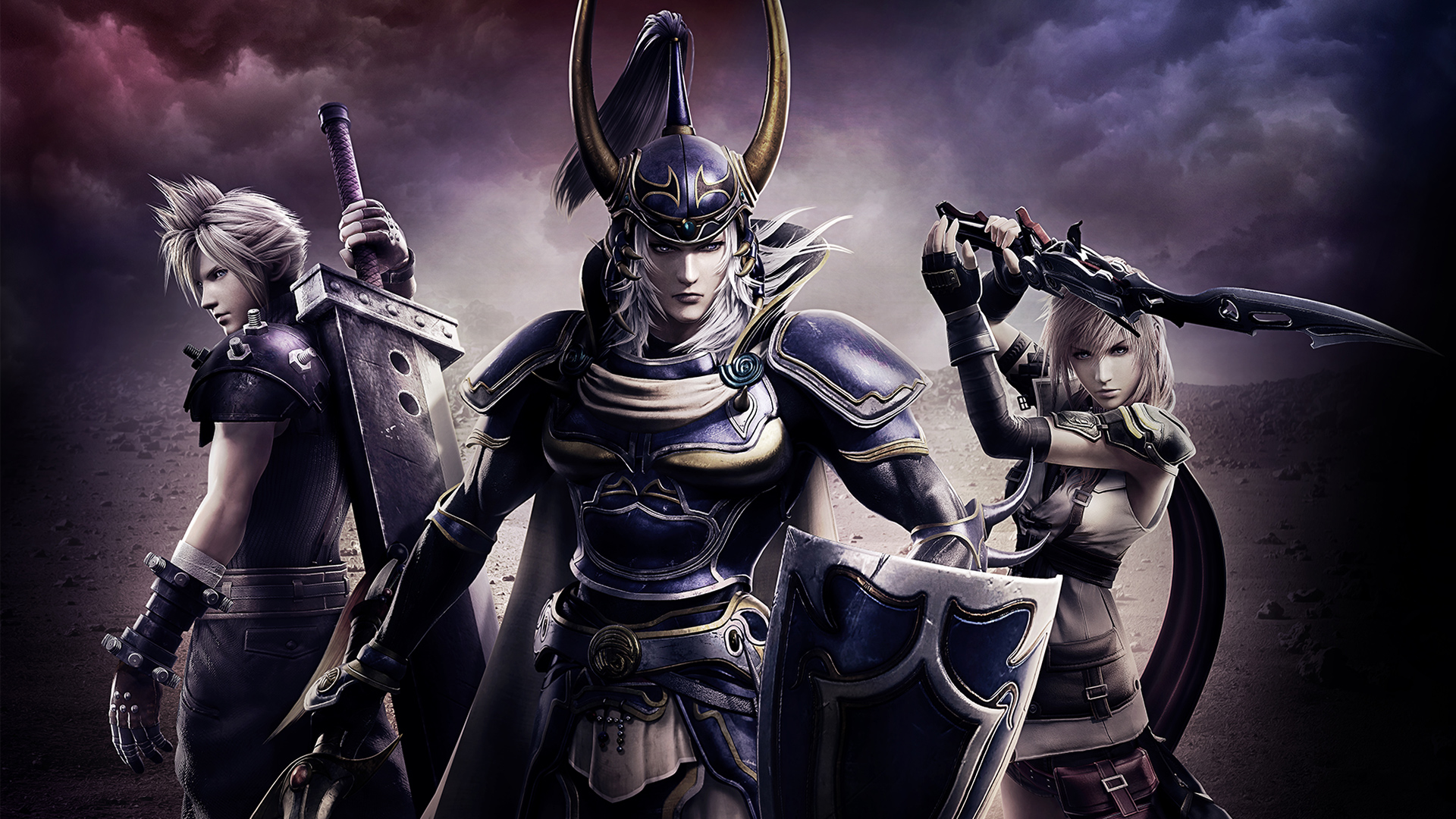 I like to consider myself a semi-hardcore fighting game fan. I watch the Evo tournaments and Capcom Cups, memorize the combos, and hell I even used to compete in Soul Calibur competitions. I’ve played nearly every notable fighting game ever made, but the Dissidia series has never managed to click with me. That’s changed now that Dissidia Final Fantasy NT has come along.

Now, don’t take that as the admission of a new fan; I’m not, as you’ll see by the review’s end. However, Square Enix has taken pains to make sure everybody knows how to play the game, while also streamlining the systems to keep it much more focused.

I’ll need to spend some time on how Dissidia works because it’s just so different from a traditional fighter. The objective is still to knock out your opponent, but to do so you’ll need to buff your attack power first. Instead of flat damage values, the game uses two different types of attacks that rely on each other.

Bravery is your ability to deal and absorb damage. You want plenty of it, which can be acquired by using Bravery attacks. Think of it as a leeching effect. Attacking someone drains their Bravery, while getting hit loses yours. Once a person’s Bravery is reduced to zero they’ll enter a vulnerable “Broken” state, awarding their attacker bonus Bravery points.

At this stage it turns into an all-or-nothing duel. The defender must flee and rebuild their Bravery, while the attacker needs to use this opportunity to deal actual health damage. If the attacker’s Bravery is higher than the defender’s HP, the attacker’s meter will glow purple, signalling they can charge in for a one-hit KO. Since this is a 3v3, it’s possible that someone else will deal the killing blow.

You don’t have to wait for that purple signal, and most times you shouldn’t, but it is the safest choice. Doing a HP attack resets your Bravery, leaving the attacker open to retaliation. Players must use their judgement, situational awareness, and team communication to decide what best to do. It’s easier to understand when you see it in action, but this complex dance can be over in a flash. This is because of all the EX Skills at your disposal. These depend on the character and can do all sorts of things, such as healing teammates or buffing your attacks. Each character gets two customizable and one fixed EX Skill slot, but they can only be used once the EX gauge is full. The gauges fill naturally over time and when you’re landing attacks, so they do reward aggression.

If you’ve played the Smash series, the battle system will undoubtedly be familiar. A single directional button press is all you need to execute a move. It’s great for newbies who are intimidated by more traditional fighters, and anyone can have a good time after just a few matches. It’s fun balancing the need to gain Bravery while trying to stay ahead of your opponents and survive.

Guarding is the main defensive method in Dissidia Final Fantasy NT, but it can’t be held for too long or it’ll break and leave you helpless. There’s also the much more useful side-step, though you need to know the timing of your opponent’s move to pull it off well. Do it right and you’ll be in a prime position to lay the smackdown. Advanced methods like Dash, Evasion, and Guard Cancels exist too, so there’s still plenty to master once you’ve learned the basics.

Being incapacitated isn’t game over, though. Players can choose where to resurrect, costing their team one point from the health pool. There are only three points available, so even the matches themselves can be over quickly.

Now here’s where things get interesting. During battle, you not only have to worry about the enemy team, but also worry about Cores. These chunks of crystal will randomly appear on the field after an announcement and are crucial for filling up your summoning gauge. The summoning process takes a few seconds, leaving the player exposed, but teammates can chime in to speed things up.

You’ll probably recognize the line-up of Summons available, which range from Odin to Bahamut to Alexander. Sadly, only a few are included; Anima, a personal favourite from FFX, is sorely missed. While they get a flashy cinematic and directly affect the battlefield, they also apply different buffs before and after summoning.

The only thing I’ve found annoying is the camera. It gets chaotic when there are six people fighting and dashing with all these visual effects flying around, especially after a summoning. It sometimes gets so messy that you lose track of who’s fighting who, which can spell trouble when your team isn’t communicating. There’s a story mode in Dissidia Final Fantasy NT though I’m still not sure if the implementation is genius or incredibly stupid. It’s been broken into multiple parts on a point-based map, each point being a battle or cutscene. However, to view these you’ll need Memoria, which are only earned when you fight and level up.

Here’s the conundrum. On one hand, this does make the player spend more time on the game. On the other hand, it penalizes players who only wish to see the story. This may be a fighting game, but Final Fantasy built its fanbase on characters and story. As a major console release, it wouldn’t be surprising to hear fans picking up Dissidia for the first time just to see their favourite heroes and villains interacting with each other.

Ultimately, I’m going with the “This is stupid and somebody should be shot for this” side. Gamers should be given a choice on how they want to enjoy things, and all this is nothing more than arbitrary padding. And if you’re curious, the story picks up after the previous PSP-only Dissidia games, with the new gods Materia and Spiritus pitting the Final Fantasy cast against one another. In other words, It’s pretty much the same old plot, only with new characters. The arenas are all picked from the main Final Fantasy games. From I to XV, each game is represented by a stage, though they may sometimes be weird choices. For example, FFX is represented by Besaid Island, but neither Wakka nor Lulu is in the game. Since we have Jecht and Tidus, Zanarkand would have been a better location. The stages themselves vary in shape and size. Some are big and wide open, like The Promised Meadow from FFVIII, while others are cramped and narrow like FFVII’s Midgar or FFXIII’s Eden. However, most are boring to play in, look bland, and have very little environmental interaction to speak off.

Luckily, the character models in Dissidia Final Fantasy NT look incredible. While newer faces like Y’shtola and Noctis look as good as their original character models, it’s great to see older characters like Onion Knight and Ultimecia updated for today’s standards. Even so, the frame rate’ manages to be stable enough, even when there’s a ton of special effects happening on-screen. There’s no noticeable input lag, either, and all the buttons respond as you’d expect.

Weirdly, though, there seems to be audio cut from the game. When you choose your character, the game shows them talking but only silence comes out. I first thought this was a weird limitation of the beta, but seeing it again in the full version leads me to believe it might be a cut feature. Perhaps Square Enix simply didn’t have the time to record the extra lines that should’ve played there?

The music is a mixed bag, too. It has the big, memorable tunes like “One Winged Angel” (FFVII) and “Dancing Mad” (FFVI) but it’s also missing a ton of recognizable music like “Liberi Fatali” (FFVIII) and “To Zanarkand” (FFX). Also absent are theme songs like “Melodies of Life” (FFIX) or “Eyes on Me” (FFVIII). They’ve included a bunch of remixed versions, but most are nowhere near as good as the originals. The equipment and levelling systems of past Dissidia games are largely gone or streamlined now, which is a shame as it eliminates a ton of depth and customization from the game. In their place are separate Player and Character levels, each unlocking different things.

I’ve always been a fan of similar systems and I’m a fan of this as well. It constantly rewards you for playing, thus giving you incentives to try out each character. While I wish there are more customization options to unlock, especially skins, there’s still a ton of stuff to collect. You’ll likely need to keep playing for weeks, if not months, to get everything.

You also get Gil from battles, which you be spent in the shop to directly unlock Character items, Player icons, and Battle Music tracks. These can also be randomly found in treasure chests, which are rewarded with every level up. You’ll need to fight either online or offline to level up in Dissidia Final Fantasy NT. When offline, you can access Gauntlet Mode and the custom Sparring Match. Gauntlet has you fighting increasingly difficult AI teams, and come as standard 3v3 matches or Core Battle, where the objective is to take out the enemy team’s Crystal. It’s not as a simple as it sounds, since the enemy can’t be anywhere near their Crystal if you want to damage it. Although it’s a fun tug-of-war, I’ve found the AI surprisingly inadequate when they’re on your team.

Online, you can play Ranked battles either solo or with a party, or just create a custom match. Early leavers are penalized with an automatic loss in Ranked, which is great news for those who have teammates who drop at the first sign of trouble.

Though matches are mostly lag-free, I’ve also been in fights with severe latency issues. Hopefully there will be further patches to iron out the netcode and ensure smooth gameplay, but at least it’s nowhere as bad as the laggy beta.

Your online and offline ranks are separate, so you’ll need to rank up depending on which mode you play more. Offline, these ranks improve your AI teammates, making them more effective.

As a fighting game, Dissidia Final Fantasy NT is a pretty good alternative from mainstream hits like Street Fighter V: Arcade Edition or Tekken 7. It’s simple to play but there are nuances that give it depth, and mastery will undoubtedly take time. That applies to unlocking everything in the game.

However, as fan service it’s missing a lot of things that hardcore fans are looking for. Why not have Auron or Seifer? Where are the villains from FFXI to XV, Tactics, and Type-0? What’s the deal with the music and the lack of iconic stages? And let’s be real: why would Square Enix make a Final Fantasy brawler if not to pander to the massive, existing fanbase? The story mode isn’t going to win over new fans.

One hopes that Square Enix can go all the way the next time. Everything in the game, from Summons to music to stages, is just a tantalizing teaser of what’s on the surface of the series. That’s no way near enough for hardcore fans who deserve much, much better.

Dissidia Final Fantasy NT is out now for PlayStation 4.
Developed by Team Ninja. Published by Square Enix.
A copy was provided for review.

Sal's just your average hardcore gamer. He started gaming on the NES in the 80s and has been ever playing since. Sal doesn't care about which platforms games are on, only that he wants to play them all!
Previous post Loot Crate turns to God of War for their next Limited Edition crate
Next post Welcome the Lunar New Year with PlayStation discounts and giveaways