Review – Call of Duty: WWII (PS4) multiplayer could have easily been a disaster 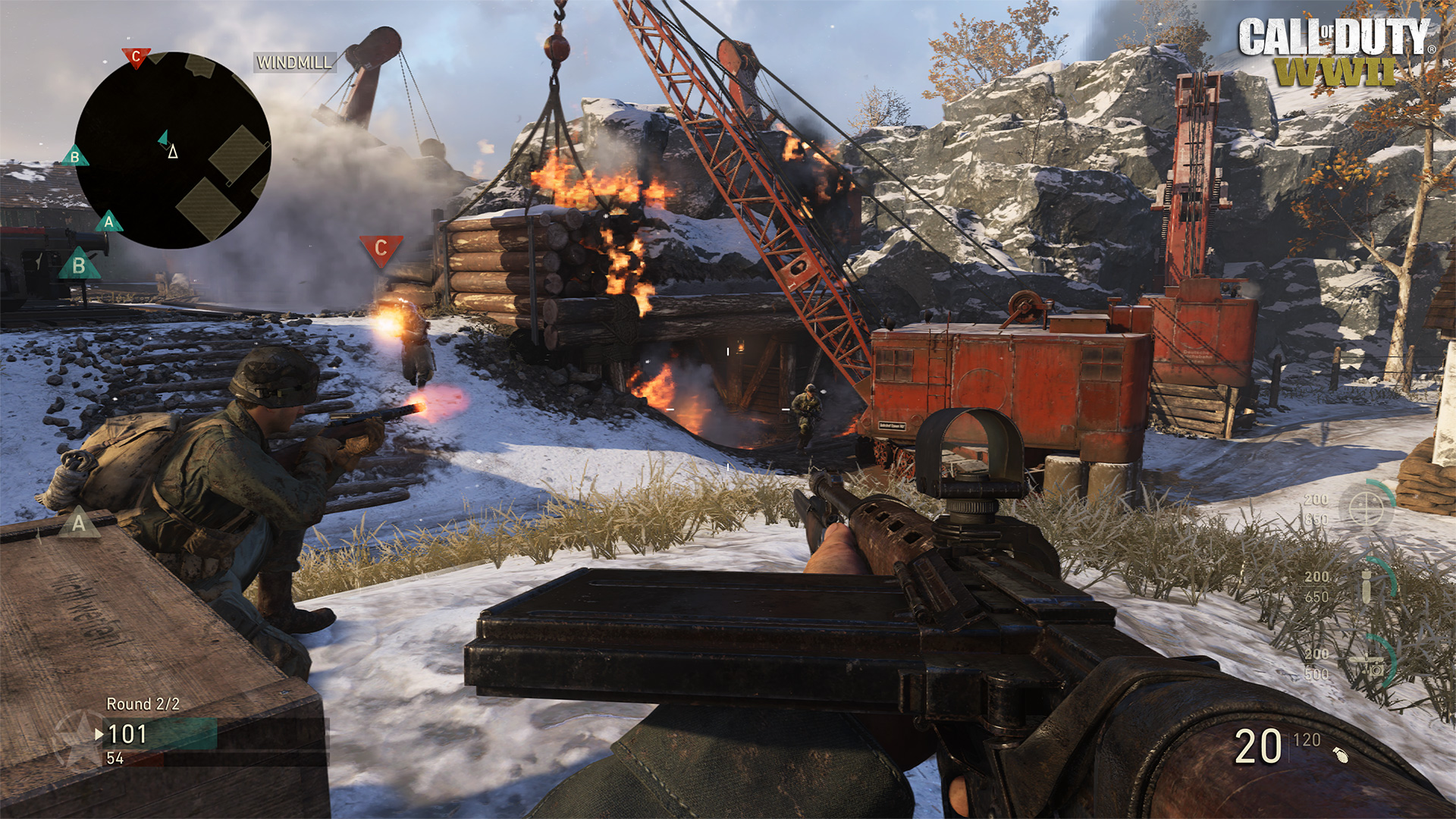 With the single-player review over, it’s time to tackle the meat-and-bones of any Call of Duty release: its multiplayer. Everybody should know by now that Call of Duty: WWII has returned to military shooter basics, where eclectic abilities such as wall running, double jumping, and boosting are long gone. After years of hyper-frenetic gameplay, it’s actually a welcome breath of fresh air.

Like in previous games, your entertainment mileage will vary depending on which multiplayer mode you play. I’ve found that, on PS4, it takes to a bit longer to get matched in modes other than Team Deathmatch or the all-new War. That should speak to their popularity, while also showing how dull the other returning modes have become.

Repetition is everywhere. All of the maps are either taken from, or inspired by, the campaign; while they’re well-made, they tend to get boring quickly. The Scorestreak system may go by a different name but it still feels familiar. You can call a reconnaissance plane to mark enemies on the minimap, set up a bombing run, or get in the gunner’s seat of an iconic B-17G Flying Fortress to rain down hell. It’s all been done before and I’m honestly wishing for more.

If there’s one shining ray of hope it’s the new 6-vs-6 War mode. It single-handedly saves Call of Duty: WWII‘s multiplayer, and is also one of the best multiplayer modes out of any shooter this year. War is thematically simple. One team plays as the Nazis and the other, the Allies. You’ll get different tasks depending on the map, ranging from tank escorts to location captures. If the defenders manage to hold their objectives for long enough, the attackers lose and the round ends. However, if they fail the map enters its second phase, opening up new areas and a whole new objective to fight over.

With multiple objectives per stage, War matches are fast, fluid and ever-changing. Unlike typical Call of Duty sessions, War doesn’t care about your kill:death ratio, only how well you function as a team. It’s a refuge for those who find the competitive modes overwhelming, as even the worst shot on the team may become the most valuable player.

The other half of the fun comes from the maps. Although only three are available (with more to be added via the season pass), each map is different enough to last multiple playthroughs.

For example, Operation Breakout starts as a close-quarters manor fight before evolving to a bridge-building standoff, an ammo dump demolition, and finally a tank escort. Of the three maps, Operation Neptune is arguably the best, recreating the historic Normandy beach landings. It’s one thing to experience it through the campaign’s scripting and set pieces; it’s a whole different ball game when the opposition are accurate, unpredictable human players. Suddenly, forcing your way up that beach isn’t so simple any more.

Always something to do

While Call of Duty never had simple progression, WWII adds a new layer of depth to the whole enchilada. The class system has been reworked into Divisions: Expeditionary are close-quarters specialists; Armored are heavy weapons and demolition experts; Airborne are scouts; Infantry your basic G.I. Joes; and Mountain the snipers.

Weirdly, there are no support classes like medics or ammo providers. Perhaps they’ll be added in the future but, as it stands, your only recourse when your weapon runs dry is to either scavenge a new one or to die and respawn.

Each Division has perks that build upon their specialty. While you can equip an infantryman with a sniper rifle, he won’t benefit from it as much as a Mountain Division sniper would. Then there are Basic Training abilities – these are global unlocks that, among other things, let you use two primary weapons or shoot while running and diving. You can only equip only one ability per Division, so experiment and find what suits you best.

Basic Training uses a shared pool of Rank Unlock tokens, which are also used for unlocking most weapons and their attachments. Like their name suggests, you earn some for ranking up. The weapons themselves have their own progression ladder as well, with rewards such as scope attachments or full metal jacket bullets. I noticed some weapons have higher levels and more associated unlocks than others. Max out your weapon’s level and you can even “prestige” it, resetting your progress and unlocks but granting special options such as a kill counter or a clan tag. Oh, racking up kills with a weapon also unlocks camouflage, paint jobs, and different reticules for it – who says Call of Duty: WWII doesn’t have options?

Keeping up with the trends

In fact, there are plenty more option now that the game has its own social hub. You’re taken to Headquarters the moment you log into multiplayer, and here you do more than just chat. Basic activities include getting your mail, creating emblems, and getting to prestige Divisions and weapons. Beyond that, you may pick up Orders for Supply Drops and in-game currency, spending those credits at the Quartermaster for unlockables. There’s a shooting range and a Scorestreak training zone, in addition to the popular Zombies mode. You can even watch Major League Gaming matches.

It’s a welcome break from the constant cycle of shooting and dying, though it could have benefited from having more activities.

Getting your various Daily, Weekly, and Special Orders is one of the most important things to do. The rewards scale up accordingly, with Special Orders only appearing during special timings. While fun and a good motivation to play, I wish there were more Orders available and the rewards more consistent. I’ve found Supply Drops for easy challenges just as much as in the hard ones.

In case you were wondering, Supply Drops are Call of Duty: WWII’s version of loot boxes. You get them by completing certain Orders or at random when playing the multiplayer and Zombies modes. These come in Normal and Rare varieties, providing consumables such as temporary XP boosts or cosmetics such as emotes, skins, and calling cards. Multiplayer and Zombie boxes are separate so you’ll need to play both to unlock everything.

Rise of the living dead

Speaking of Zombies, it’s been tremendously revamped for WWII.  Not only does it have a prologue with its own cinematic, it now also has an underlying plot behind it. Set in the town of Mittelburg, you’ll fight the undead as one of four initially available characters. Netflix buffs will no doubt recognize Elodie Yung (Daredevil), though sci-fi fans will probably clamor to David Tennant (Doctor Who) while zombie lovers throng towards the spectacular Ving Rhames (Dawn of the Dead).

While each character plays similarly, it’s the custom loadouts that dictate your play style. You’ll want to mix and match but here’s a tip: one can never go wrong with the Offense class’ ‘Freefire’ ability.

Call of Duty: WWII’s Zombies will be familiar to anyone who’s played the previous incarnations. You’ll still face wave after wave of undead as you try to earn currency, now called Jolts, to unlock gates and accomplish other objectives. You’ll also be using those Jolts to buy stronger guns as well as power-ups, such as the new ‘self-revive’.

There’s a separate rank system too, which awards weapon attachments just like in the regular multiplayer. Consumables from the Zombies’ Supply Drops are used prior to a match, while the ones you find mid-game are triggered automatically.

The best part is how Zombies finally treats itself as a horror mini-game. Instead of having the undead mindlessly trailing you, the game spawns them when you least expect it. It’s scares galore: they might drop from open vents and windows, or crawl right up from the ground. They even made the zombie models more grotesque for a stronger shock value. I’ve had more than a couple of frights playing the mode, which in a Call of Duty game is no mean feat.

Call of Duty: WWII‘s multiplayer mode could have easily been a disaster with all of its rehashed modes. After all, how many different rounds of Team Deathmatch can one play before getting bored?

It turns out that the game’s strengths are, ironically, not with its bread and butter offerings but with its experimental aspects. War mode is a brilliant update to Call of Duty‘s fast-paced gunplay, and the deeper Zombies mode is so packed with features it’s viable enough to be a standalone. Even the Headquarters hub is a welcome addition to differentiate the game from past entries. Just don’t expect the rest of the multiplayer to be as enjoyable as these.

*The review for Call of Duty: WWII’s single-player may be found here.

Call of Duty: WWII is available now for PC, PlayStation 4, and Xbox One.
Developed by Sledgehammer Games and published by Activision.
A copy was provided for review.

Call of Duty: WWII (PlayStation 4) was reviewed on the LG OLED C7 Television. Sal's just your average hardcore gamer. He started gaming on the NES in the 80s and has been ever playing since. Sal doesn't care about which platforms games are on, only that he wants to play them all!
Previous post Linksys WRT32X gaming router promises 77% peak ping reduction
Next post Review – Break free with the LG 38UC99 ultrawide monitor