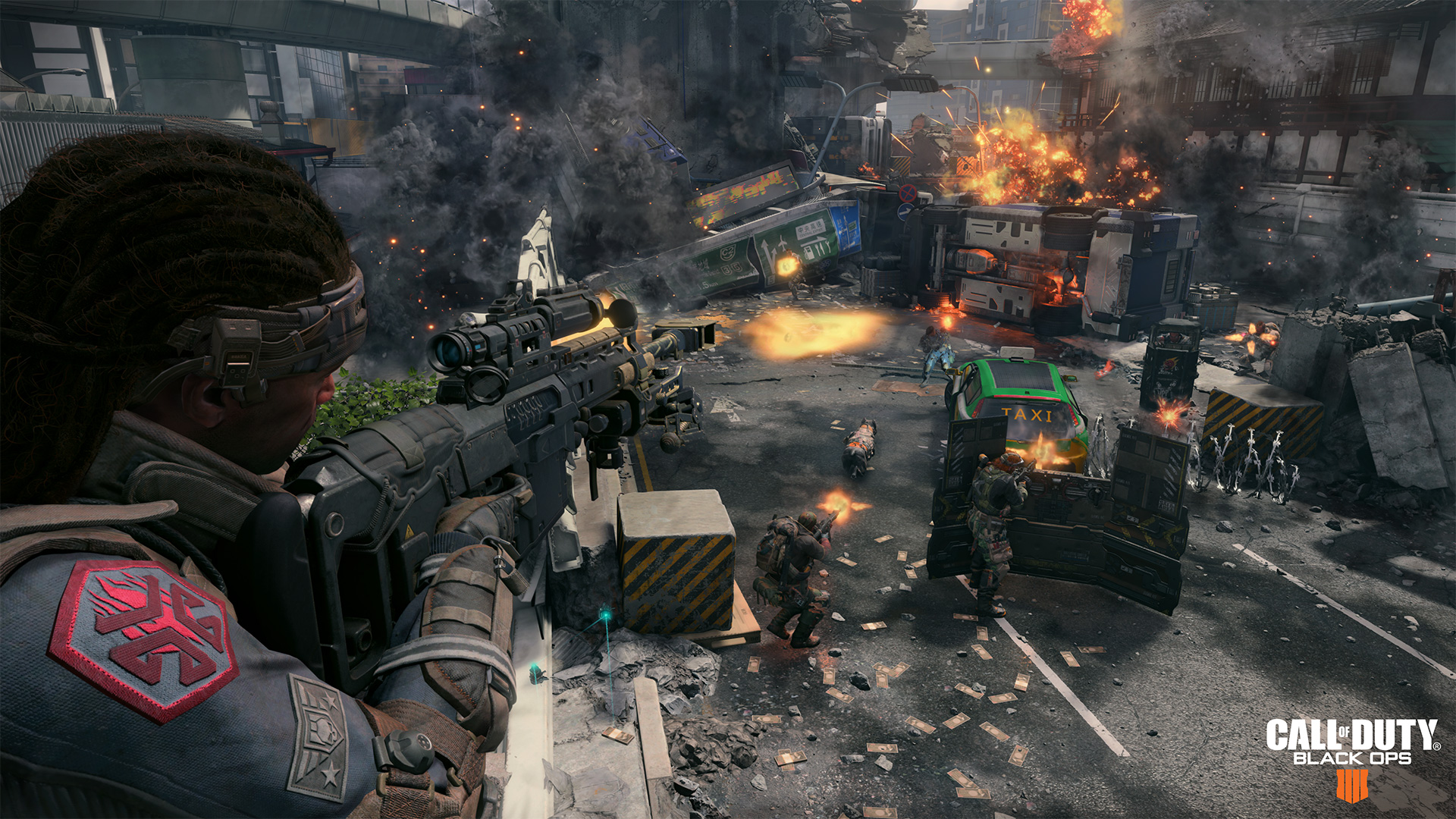 Love it or hate it, it’s undeniable that Call of Duty is a juggernaut of a franchise. It’s so massive that Activision went against everything they’ve done and shipped Call Of Duty: Black Ops 4 without a staple feature of the series. A ballsy move, if you ask me.

It’s true: there’s no single-player campaign. While there is a story behind the game, it’s all told through videos in-game and in comics online. As somebody who loves the over-the-top shenanigans and set pieces from past Call of Duty campaigns, this is the biggest gripe I have with the game. It’s a damn shame really, as Black Ops 4‘s multiplayer offerings are the best the series has to offer!

Instead we get the Specialist HQ, which serves up plot exposition and practice time with the new Specialist classes. Each one has three different challenges for you to complete, including a match against AI opponents. It’s nowhere near a suitable replacement for a full-blown campaign though, and the backstories just leave you wishing for more. Some of the training missions, like Crash’s for example, are awesome teasers for what could have been. Whatever you might think about the nixed single-player campaign, the development time gained meant that Treyarch was able to focus completely on the multiplayer aspects of Black Ops 4. In this case, they’ve introduced a Battle Royale mode called Blackout.

I’ve talked about it previously in my hands-on with the beta, but to summarize it’s a great addition that’s unlike any Call of Duty mode you’ve played. Now that the final version is out, I can definitely say that Treyarch hit the ball out of the park. There is certainly room for improvement, such as the lack of customization options, but for a first effort made in such a short time the mode is incredibly polished and fun to play.

Blackout’s claim to fame is its 100-player cap, though that’s that’s only for the Quads mode where you fight in teams of four. Duos and Solo have a lower player cap of 88. Why? I have no idea, but I certainly had no trouble running into somebody within a couple of minutes — I even got killed literally seconds into the match once. Blackout plays like a great mix between Battlefield and Call of Duty. There’s the slower, long-range sniping familiar to the former, and the the hectic run-and-gun gameplay that’s a signature of the latter. It truly shines in Quad mode when massive firefights break out between the rival groups, providing something that’s actually different from other Battle Royale games. You can even revive squad members, which makes for tense moments as you decided between pressing the attack or rushing to your bleeding teammate’s side.

Ironically, Blackout makes you wish for the speedier traversal options in past CoD games like double jumping, wall running, and boosting. Sure, there are vehicles to commandeer but they pretty much make you a moving target, whereas having those advanced movement options would help to further separate Blackout from its Battle Royale competition.

While I do like the current map, it’s only a matter of time before it becomes stale. Right now, there’s no word on when, or if, a new map is in the works. Tellingly, the Black Ops Pass (season pass) makes no mention of upcoming content for the mode, despite boasting other features.  It has even less replay value when you consider there’s no customization to speak of, and that ranking up only nets you different character models to use. Thankfully, the Zombies mode is chock full of stuff to unlock. The retail release has three different campaigns with two different stories (four campaigns if you have the Black Ops Pass, with more incoming). The Aether campaign is actually a sequel, with Richtofen, Takeo, Nikolai, and Dempsey returning to take on the undead horde. The Chaos campaign, on the other hand, actually comes with a new cast of characters: Scarlett, Diego, Bruno, and Shaw.

As before, leveling up gets you new equipment to start the session with. Individual weapons also have their own affinity progress bars, used to acquire enhancements and skins. It’s a continuous feed of unlocks that makes the game feel extremely rewarding to play. That’s on top of the new and old Elixirs for various effects, as well as special Talisman equips for buffs.

The best thing about Zombies, especially for solo gamers, are the bots you can use to fill up player slots. They’re pretty decent too, beating my kill count most of the time so that I’m annoyingly left with less points to buy stuff or unlock doors with. I haven’t encountered any pathfinding issues — they seem to stick with me rather well — outside of the ‘Classified’ mission, since that has teleporters that whisk you off to various areas. The bots tend to enter them by mistake, unable to make the return trip and slowly getting picked off by the horde. The other stages are just fine, though, and the bots will carry on through a wave even when you go down. If they manage to pull through you’ll even get to respawn, which is an awesome way to keep the match going.

The Zombies gameplay in general is still the same, with two different tutorials for newbies to try out. However, this edition does mark a shift to greater storytelling, with lengthy starting cinematics and tons of character dialogue. The banter is very well written too, and I love how they made me chuckle out loud even as I was dodging the undead. There are various settings you can tweak too, such as only making headshots count or increasing equipment charge rates; just note that XP gains are disabled with custom rules.

If you’re not interested in the usual gameplay then give the new Rush mode a shot, which is sort of like a combination of Zombies and the Control/ Hardpoint modes from competitive multiplayer. You’re basically directed to areas you’ll have to hold and defend, with doors opening as you play and point gains sped up. It makes the whole affair feel more arcade-like, which is a plus since bots aren’t available here. Even with the renewed focus on story and the addition of Rush mode, Black Ops 4’s Zombies is still unmistakable familiar. You rack up points killing the undead, buy new guns and solve puzzles, all in the hopes of surviving and doing it all again. It has honestly grown a bit tiresome, and I think that Zombies sorely needs a substantial overhaul to make things interesting again. For all its changes, the core gameplay is pretty much the same since its debut in Call of Duty: World at War ten years ago.

Which, if you think about it, can also be said of Black Ops 4’s returning multiplayer modes. That’s why I found the new Control mode to be the best, which is a little more strategic in nature than the other, older modes. Sure, some maps encourage camping, but players who utilize the different Specialists well will find it rather rewarding.

That being said, Specialists aren’t as earth shattering as you’d think. They don’t deviate from the tested run-and-gun Call of Duty gameplay, and their abilities are on cooldowns and recharges that feel a little long. I hoped their timers would have been hastened after the beta, but it seems that you’ll still have to count on the Equipment Charge gear to speed things up. 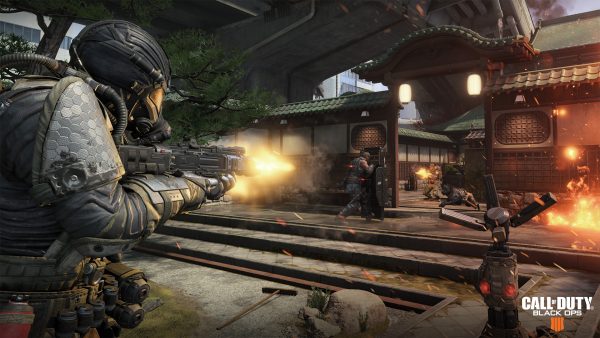 Couch co-op gamers will be happy to hear that Black Ops 4 does have split-screen multiplayer — up to four players for Zombies and two for everything else. There is a noticeable slowdown and drop in visual quality, but hey, it’s better than nothing when you have friends over.

That’s not to say I had issues joining online games. The launch servers are smooth and matchmaking is fast, though it’ll probably get slower down the road if past CoDs are any indication. Not because of other games on the horizon, but because the player base is already fragmented with the new maps exclusive to Black Ops Pass holders.

Lag is a bit of an issue, even though I’m playing on a wired 1Gbps line. It’s the story we’ve all heard before: a killcam showing me standing around like a fool before reacting late and dying, and the total opposite of what I saw in my version of events. Despite an impressive array of network information tools in the Options menu, the game still doesn’t have a server browser or, at the very least, the ability to choose which region to play in.

I’m surprised to see that there are slow loading textures too, even though the game isn’t that much of a looker in the first place. This sacrifice in visual quality does maintain the game’s 60 FPS framerate, however, so it’s not that huge of a deal. 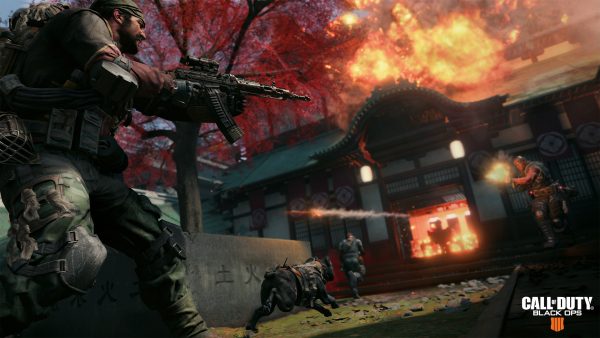 Having played on the live servers since launch, I think that the gamble to go all-in on multiplayer wasn’t really that good of a move. Sure, there are three major modes now but, apart from Zombies and its steroid-like content boost, there isn’t anything that salves the pain of a missing single-player campaign.

Blackout is fun in short bursts but character models aren’t that great of an incentive to keep playing. It doesn’t share any of the addictive unlocks and customization options that Zombies and competitive multiplayer has, which is a tremendous misstep considering the series’ legacy and what its closest competitors already do. The mode has also shown that the engine can handle large-scale warfare, so where are modes like Halo’s Big Team Battle or Battlefield’s Conquest? It’s a waste to have the Blackout map be for only one mode. Perhaps more will be added to bolster the current lineup, but that’s just wishful thinking at this point.

As for the competitive multiplayer modes, what’s to be said that hasn’t already been said? The lack of evolution hamstrings what could’ve been a killer multiplayer fiesta, and pushing all their hopes on the new Control mode would have been fine it it wasn’t too similar to old multiplayer standbys such as Domination and Hardpoint.

If you have a hunger that only Call of Duty can satiate then by all means, jump right in. Black Ops 4 has the series’ greatest multiplayer experience since Modern Warfare 2, thanks to its plethora of tried and true modes. Couple that with Blackout and a beefed up Zombies mode, and it’s safe to say that the game covers nearly every multiplayer base with its offerings. On the other hand, there’s just nothing here that could be called revolutionary or evolutionary; it’s classic Call of Duty through and through.

Call of Duty: Black Ops 4 is out now for PC, PlayStation 4, and Xbox One.
Developed by Treyarch. Published by Activision.
A digital PS4 copy was provided for review. Sal's just your average hardcore gamer. He started gaming on the NES in the 80s and has been ever playing since. Sal doesn't care about which platforms games are on, only that he wants to play them all!
Previous post The GameAxis Playlist (November 2018): Nintendo Switch
Next post Get a 17.3-inch display in a 15.6-inch body with Aftershock’s APEX 17 gaming notebook