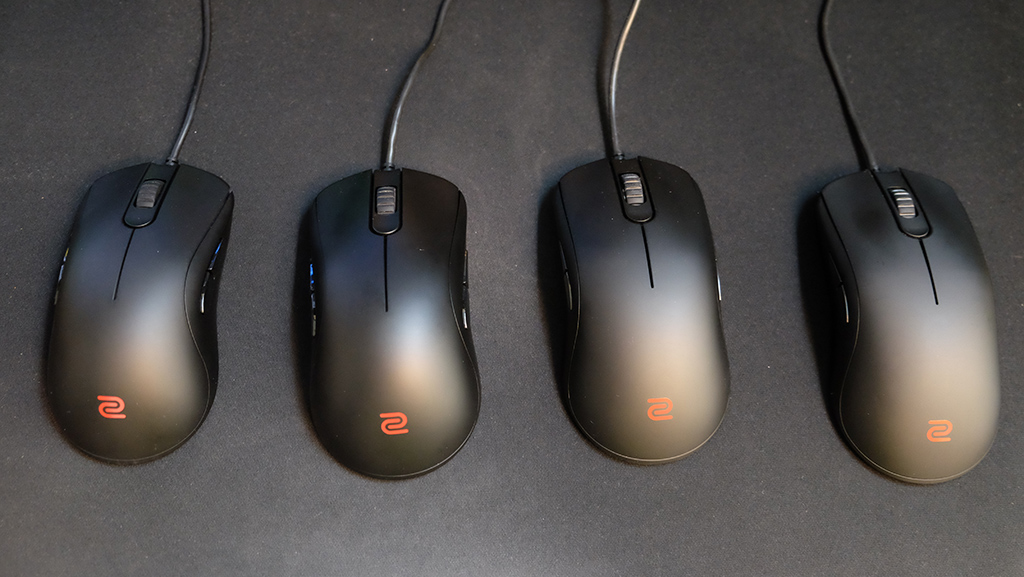 Sometimes, less is more, and there are few gaming brands that epitomize this more than Zowie. BenQ’s line of gaming gear has long been a staple in the toolkit of professional gamers who – surprise – don’t care much for dazzling the opposing team with a fancy light show.

Coldzera, the top-ranked Counter-Strike: Global Offensive player of 2016 who currently plays for SK Gaming, uses a Zowie ZA12. Taimou, of EnvyUS Overwatchfame, uses a Zowie EC2-A to land those sick headshots and hooks with his signature McCree and Roadhog.

What matters is a mouse that tracks flawlessly and fits your hand and grip style, all of these areas that Zowie now excels in. We’ve all been there at some point or another. Maybe the mouse has a great sensor and a shape that you like, except it’s too big. Or maybe it’s just too tall for your liking, when everything else is perfect.

Most brands generally go for a one-size-fits-all approach to a certain model, which is why I appreciate Zowie’s approach so much. The FK and ZA series of mice are actually remarkably similar to each other. They differ mainly in terms of shape – the ZA mice are taller with a far more pronounced hump at the back, while the FK models are longer, wider, and flatter. On top of that, there are three different sizes in each line-up, the better to accommodate a range of hand sizes.

What’s more, these are ambidextrous mice with side buttons on both sides, so there’s a good chance of finding a model that suits you.

It’s important to get one thing out of the way first. If you want customizable macros, fancy lights, or tunable weights, you’re looking in the wrong place. These mice only pack in the essentials, so you’ll have to complement your neon-suffused rig in some other way.

I used both the FK and ZA mice in Overwatch for a week, and it immediately became clear that the two series are suited to different grip styles. While you can arguably palm or claw most symmetrically designed mice, the low profile of the FK mice means that they feel a lot more comfortable when clawed.

On the other hand, the higher arch of the ZA models provides more support and allows them to be more easily palmed if that is your preference, although they are equally suited to a claw grip as well. Furthermore, the ZA mice just felt better in hand, and the steeper slope toward the front of the mouse also conforms more naturally to the natural resting position of your hand.

As someone with smaller hands who is partial to the palm grip, I naturally favored the ZA13, but your mileage will of course vary.

All the mice use an Avago 3310 optical sensor, which is thankfully absent problems like acceleration, prediction, or jitter. Optical sensors are generally considered more reliable and consistent than their laser counterparts. The latter has a tendency to pick up too much detail on a surface, especially on cloth pads (they’re great on hard pads however), which can introduce unwanted variables into sensor performance. In comparison, optical sensors are better at just measuring the distance from the tracking surface, which is really all you want to be doing.

I noticed no problems with tracking, and the mouse translated my movements faithfully onscreen. Another notable point is the low lift-off distance, and when I lowered my sensitivity to test this, the mouse cursor always remained in practically the same place after each lift-off and repositioning.

I also like the light weight of all the mice, an especially important consideration for FPS gamers. Long hours of frantic swiping can take its toll, and the last thing you want is a mouse that starts to feel like a deadweight. The large mouse feet on the bottom is a nice touch as well, making for a very smooth glide.

Zowie’s mice have mostly been plug-and-play, driverless affairs, and the mice reviewed here are no different. This may or may not appeal to you, and while it does mean you can use the mouse on another PC without worrying about drivers, you also give up more fine-tuned DPI controls. A button on the bottom of the mice lets you toggle between steps of 400, 800, 1600, and 3200DPI, so you’ll have to tweak your in-game sensitivity if you use something in between. The LED light above the button changes to indicate the DPI – for instance, it glows red for 400DPI and blue for 1600DPI.

You’ll have to turn the mouse over whenever you want to change the DPI, which may take some getting used to if you’re coming from a mouse with a dedicated DPI switch on the top.

The left- and right-click buttons on the FK and ZA mice also both use Huano switches, which require a bit more force to actuate than Omron switches. That said, this doesn’t mean that they are difficult to click, and may even help FPS gamers who want to train themselves to tap instead of simply letting loose an entire clip of bullets. Between the FK and ZA series, I noticed that the buttons on the latter were slightly easier to depress, and are actually closer to what you might get with Omron switches.

Because of the driverless nature of the mice, these side buttons also aren’t programmable. They function as forward and back buttons while surfing the web, but there is no way to change what they do in the regular desktop environment. That said, you can still bind them to other functions in the control settings in-game.

Each notch on the scroll wheel feels well-defined enough, so you won’t find yourself accidentally flying past the item you want in your inventory.

All in all, these are very practical mice that are best-suited for FPS gamers. Those of you who play MMOs may miss the option of additional, programmable buttons, but that’s not to say that the Zowie mice won’t serve you well if you can live without the extras.

There are literally no superfluous features here, and the only LED you’re going to find is the DPI indicator on the bottom. If you don’t need it to play, Zowie hasn’t included it. Everything feels supremely functional, down to the matte coating that has proven quite effective at resisting grime over long hours.

That said, if I had one complaint, it would be the S$109 price tag. That’s not expensive in and of itself, but there are more feature-rich mice out there that cost around the same or even less.

Still, this utilitarian approach is refreshing in a gaming market saturated by the garish glow of LEDs and confusing jargon. There are few alternatives with a similar appeal, and Zowie’s mice are a strong option for no-nonsense gamers who are just looking for a trusty rodent that will not let them down.
Our Verdict:

Squee delights in trash talking on Overwatch and sleeping till 5pm on weekends. Few other things matter, except perhaps the next episode of Game of Thrones.
Previous post What you’ll get to do in this week’s For Honor beta
Next post Long War 2 out now, free mod revamps XCOM 2 experience