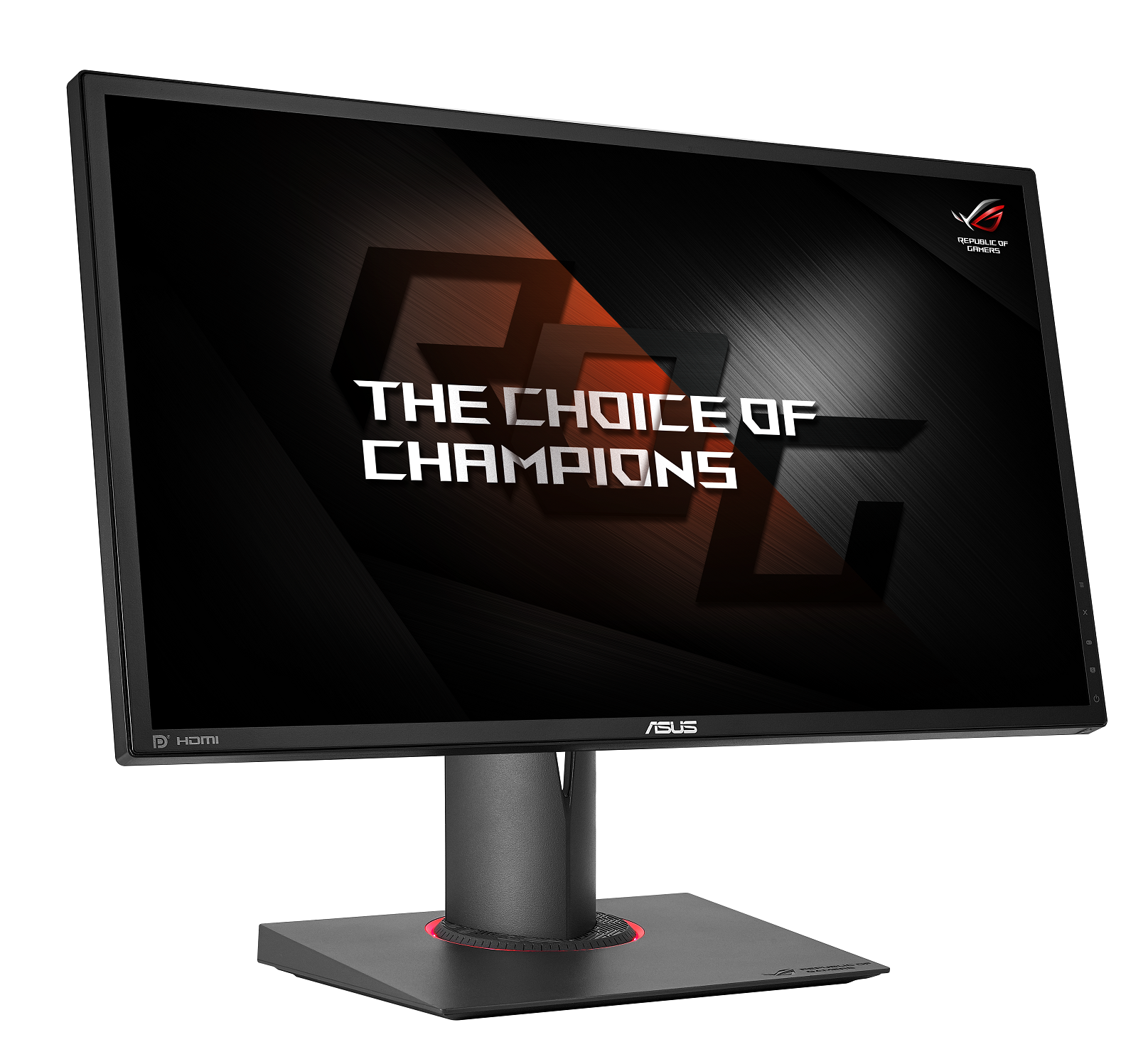 The ASUS ROG Swift PG248Q is targeted at a very specific gaming crowd who want fluid visuals on this little beast with its incredible 180Hz overlocked refresh rate 1ms response time. Specially, eSports or competitive gamers who require high refresh rate and fast response time for that precise headshot kill or a pixel perfect connection to get that “Shoryuken” hit.

In terms of build quality and design, ASUS has always built things that demand attention, and the PG248Q does just that. While it measures a respectable 24-inch in screen size, its overall appearance is sleek and stylish, with plenty of sharp lines to accentuate its overall aesthetic. The smaller display size also makes it easier for transportation for a competitive match (or for used in a large-scale tournament). The PG248Q rests on a sturdy stand that can be swiveled left and right, adjusted up or down, and can even be rotated to a portrait view if you so desire. You can also ditch the stand completely in favor of a standard VESA mount if you so desire.

Around the back you’ll find a DisplayPort 1.2 and HDMI 1.4 port, as well as two USB 3.0 ports. They’re all set at a slight angle, presumable for better cable management. On the bottom-right side are the OSD controls, as well as hotkeys for the GamePlus and GameVisual settings. I’m still not a huge fan of having the OSD controls situated at the back as the individual button positions somehow doesn’t seem to match with the icons on the panels, it’s an eye trick but over time you’ll get used to it. The PG248Q also features a gorgeously thin bezel, which makes it ideal for multi-monitor setups.

What makes the PG248Q stand out from other gaming monitors in the ASUS ROG family is its ability to overclock its refresh rate to a whopping 180Hz, which pretty much eliminates any lag or motion blur you may experience in whatever game you’re playing. However, it’s worth noting that you’re going to need an incredibly powerful graphics card if you want to keep up with that refresh rate, so the default 144Hz is already very good to start with. It’s important to remember that you’ll only get these refresh rates if you’re using a DisplayPort cable – HDMI users will get locked in at 60Hz only. You’re also only locked in at 1920×1080 resolution, which is a shame, as I thought for the S$899 price you’re paying you’d expect a support for up to 2560×1440 resolution at least. But with that said, many competitive gamers do swear by the 1920×1080 resolution. As with all ROG gaming monitors, the PG248Q also comes with built-in G-Sync feature, which lets you sync up the monitor with a compatible NVIDIA graphics card. This ensures a super-smooth gaming experience and constant framerates in games, which is something any gamer would want. ASUS is certainly confident of what the PG248Q can handle, and my testing showed that this monitor can certainly take plenty of graphical abuse. I only tested using the DisplayPort, as I didn’t want to be tied down by HDMI’s 60Hz refresh rate handicap. Playing a few matches of Overwatch at 144Hz were incredible – running around levels and quickly turning around to retarget enemies was silky smooth. Cranking the refresh rate up to 180Hz made the experience even better. At 144Hz, there was absolutely no lag or motion blur in the game, but at 180Hz it was like watching poetry in motion. The game looked and responded incredibly well to every single mouse movement, and I dare say it might have even given me an unfair advantage.

Jumping into Doom, a first person shooter that counts on quick reflexes and mouse movement (which then requires a fast monitor response time), the PG248Q again showed its strengths. The game regularly uses very dark levels and settings, which the PG248Q has no trouble handling. Flipping on the GameVisual ‘FPS’ mode, the PG248Q brought out more finer details in every scene, making it much easier to spot enemies and navigate around levels. Flipping it to ‘Racing’ for Project Cars resulted in a slightly softer color palette, which is sort of what you want when burning rubber around a detailed yet normal racing track. There are other modes as well such as for watching movies or editing photos, and it’s easy to switch between the ones you need via the OSD settings.

ASUS also includes their gimmicky GamePlus tech, which to be fair has some uses. There’s the option to add a crosshair overlay for FPS games, a timer to keep track of elapsed game time, an FPS counter, and a Display Alignment feature to help with multi-monitor setups. It’s a nice touch, but apart from the Display Alignment feature, I don’t know if I’d be using any of the other available options.

While gaming performance on the PG248Q is exceptional, viewing angles (as expected on a TN panel) are a bit disappointing. When looking at the PG248Q straight-on, you’ll enjoy some outstanding visuals. But try and tilt it to show something to someone next to you, and you’re immediately going to see a loss in image quality. This however, is probably due to the limitation of IPS panels (which have better color range and accuracy), which cannot produce fast response times that a high-end TN panel can.

So is the PG248Q monitor worth recommending then? My advice is to see the monitor personally to believe what it can do, because S$899 is a big investment for a 24-inch monitor that only supports 1920×1080 resolution. But the ASUS ROG Swift PG278Q is also one of the best monitors in its class when you need features like a fast and smooth running screen with a high refresh rate and G-Sync. Tough choice then.