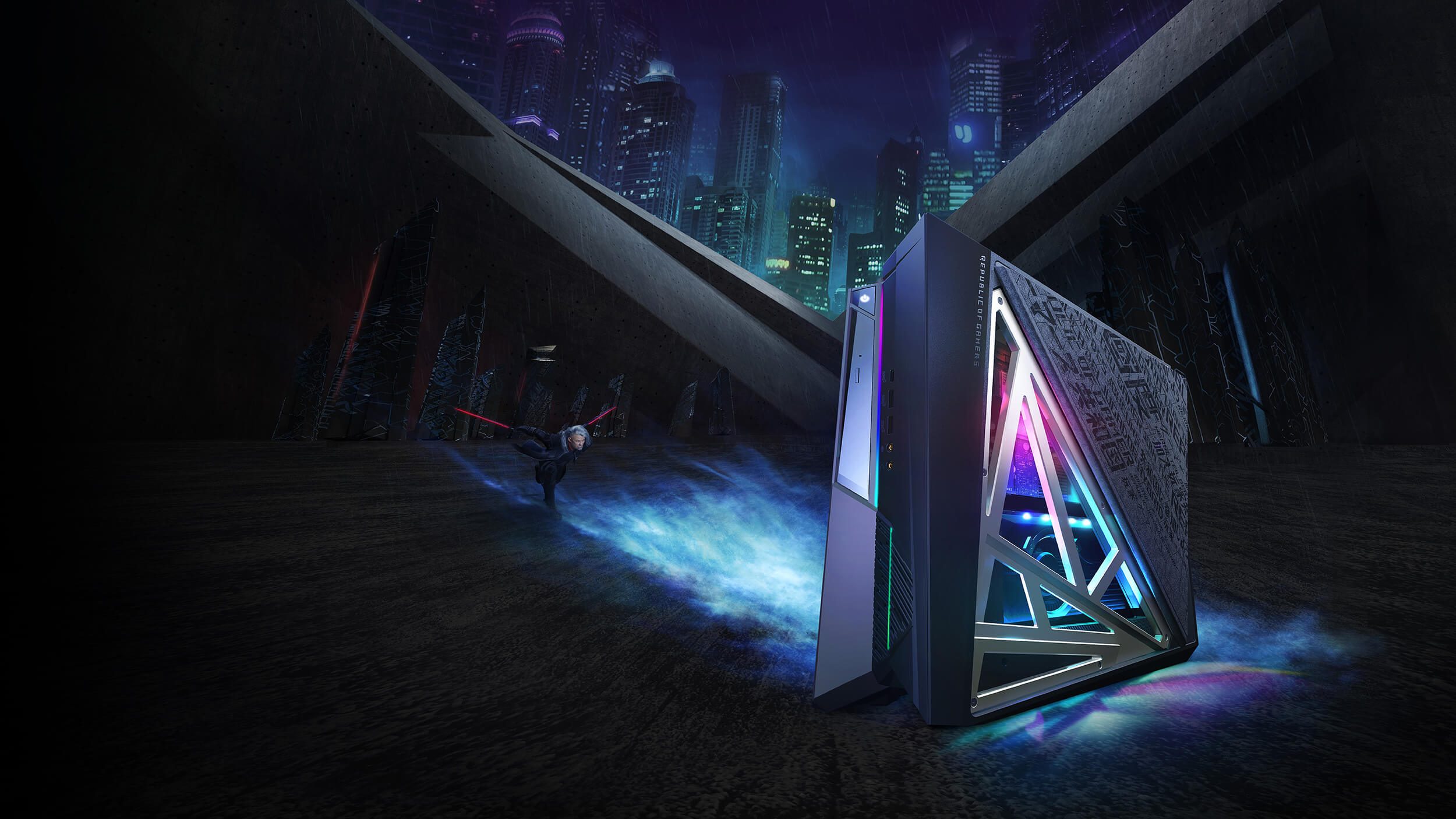 Huracan, the Mayan god of rain, wind, and fire. That is the namesake that ASUS ROG has adopted for their latest iteration of a compact, pre-built gaming desktop, the G21. The ASUS ROG G21 Huracan comes in bearing some impressive specs and sharp design. Is that enough for it to carry the name of a Mayan god? We are about to find out.

The first thing you will notice about the Huracan is how angular it is. Eschewing the traditional cuboids that we have come to associate with desktop computers, ASUS went with an asymmetric and edgy design, citing inspiration from cyberpunk. With its angular aesthetic and compact size, it looks more similar to a gaming console than your traditional desktop PC. 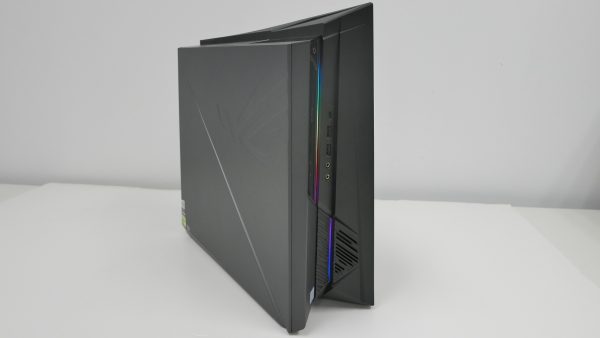 Looks are not only skin deep with the Huracan, as one of the unique things about it is the magnetic flap on the side of the case. This flap gives us a literal inside look at the guts of the machine, while also activating the RBG lighting within the case. 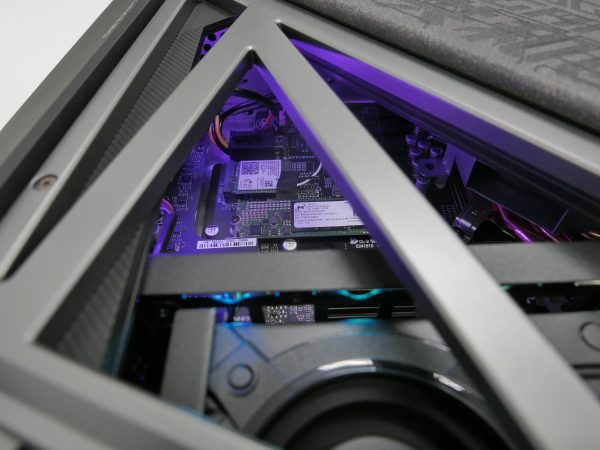 Lifting the flap also serves to improve airflow to the GPU, though that also increases the rate in which dust can accumulate.

Speaking of RGB lighting, the Huracan has thin RGB strips running down its front. Instead of looking tacky, it adds to the overall cyberpunk/sci-fi theme. This subtlety is much appreciated as opposed to the blaring transparent casings with red LEDs lining the insides. 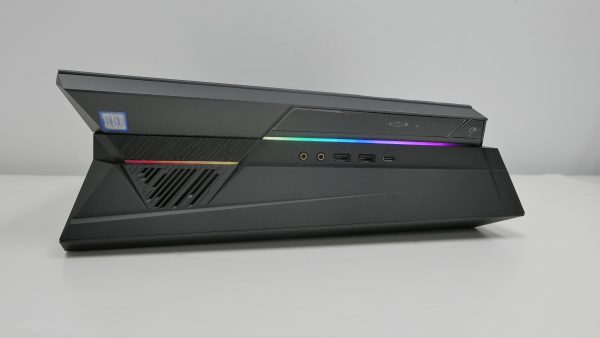 The Huracan was designed to be compact and comparatively lighter than most of its pre-built contemporaries, weighing in at 8.3kg. With a height of around 36cm at its tallest, a width of almost 13cm and a length of 37cm, it sits neatly on your desk without taking too much space. Sort of like a scaled-up version of the PS4 Pro.

Compact size isn’t the only thing going for the Huracan. One of its key features is how easy it is to swap out hardware. We put that to the test by opening it up, starting with two side panels that are relatively easy to remove; you still have to unscrew a few things here and there so that might already turn off some people.

Replacing the GPU takes a bit more work and know-how, but for storage devices and RAM the process was straightforward and simple enough. It also features a hot swap bay for a 2.5 inch SATA SSD, so upgrading is a clinch. Overall, the Huracan was relatively simple to work with compared to other pre-built gaming rigs; just don’t expect the same kind of customization as a DIY set up. 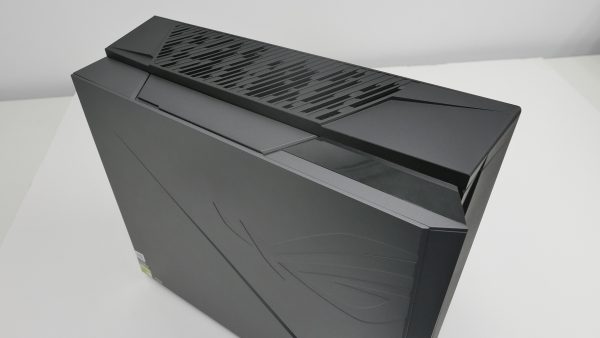 That said, one of my main gripes about the Huracan is its use of two power converters instead of one. This means that if you wish to get this gaming rig working, you need to have two power sockets available. Add a monitor and that now becomes three.

It’s the downside of having a compact design while packing a power guzzling GPU. You can’t afford to fit a bigger power supply unit, so the compromise was to split the load and have two smaller PSUs instead.

Despite its slightly diminutive frame, the Huracan still packs a lot of  USB ports; a total of eight, in fact. You will find six USB 3.1 ports at the back and two more in the front. I’ve only managed to use four of them so far, with two ports dedicated to the keyboard and mouse and the other two assigned to my thumb drive and and phone. 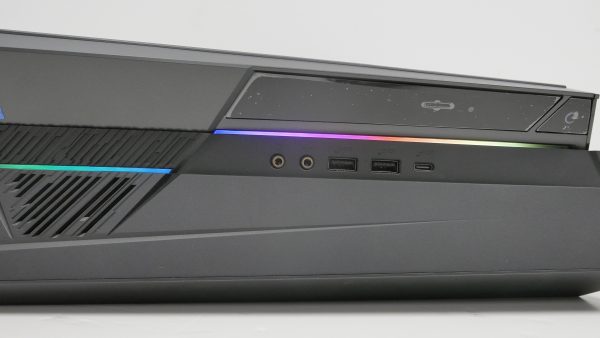 Our test unit had the basic configuration. Below is how it fared in our benchmark tests.

3DMark’s Fire Strike test is the quintessential tool to benchmark gaming PCs. In short, it puts the Huracan through a battery of graphical and processing tests to simulate demanding games. The Time Spy test, on the other hand, focuses on how a PC utilizes DirectX 12. 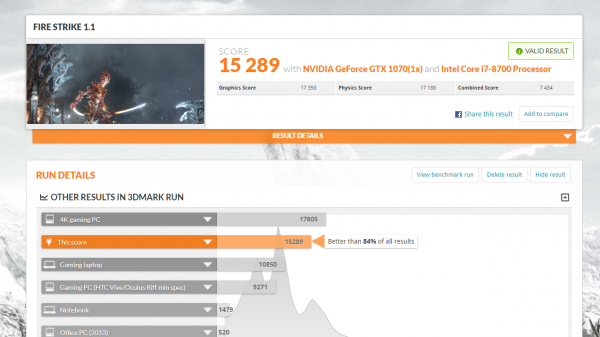 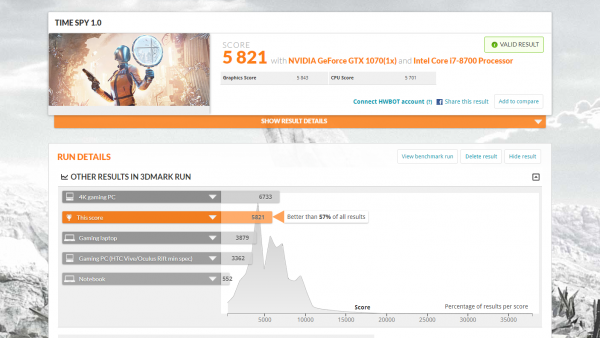 PCMark tests the non-gaming aspects of a PC. In this case, it ran through essentials like web browsing and video calls, as well as common work programs like Microsoft Office. 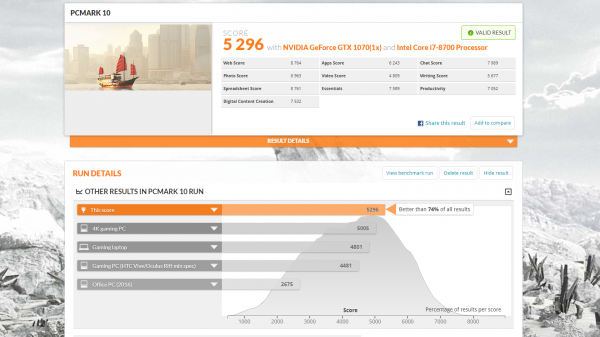 The Huracan is impressive based on its scores, especially its PCMark performance. It had a speedy boot up too, taking less than five seconds to go from hitting the power button to seeing the desktop. Most non-gaming applications were also very responsive.

This wouldn’t be a review for a gaming PC if we didn’t test some games on it. Despite being launched in Q3 2016, Deux Ex: Mankind Divided is still one of the more demanding titles on the market. We recorded the average FPS on different graphical settings:

I found gaming on it to be a smooth and pleasant experience, although the machine tends to get loud when under heavier loads.

Overall, the ASUS ROG G21 Huracan is a powerful machine. It is definitely on the pricier side for a pre-built computer, but you are not just paying for its impressive specs — you are also paying for the ease of customization, as well as its unique design. And I do like the design quite a bit. 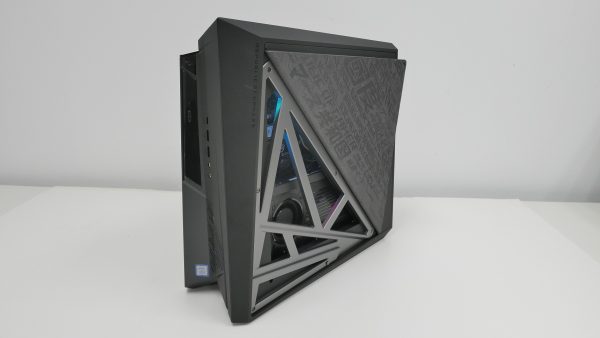 However, the Huracan‘s need for two power sockets is a major drawback. Its magnetic flap, though fancy and helps improve airflow, runs the risk of being a dust collector if left open for too long. On the flip side, it does make cleaning easier.

If extra power sockets are not an issue then the Huracan is a great gaming machine. It is by no means a god amongst other pre-built PCs, but it can give most a run for their money.