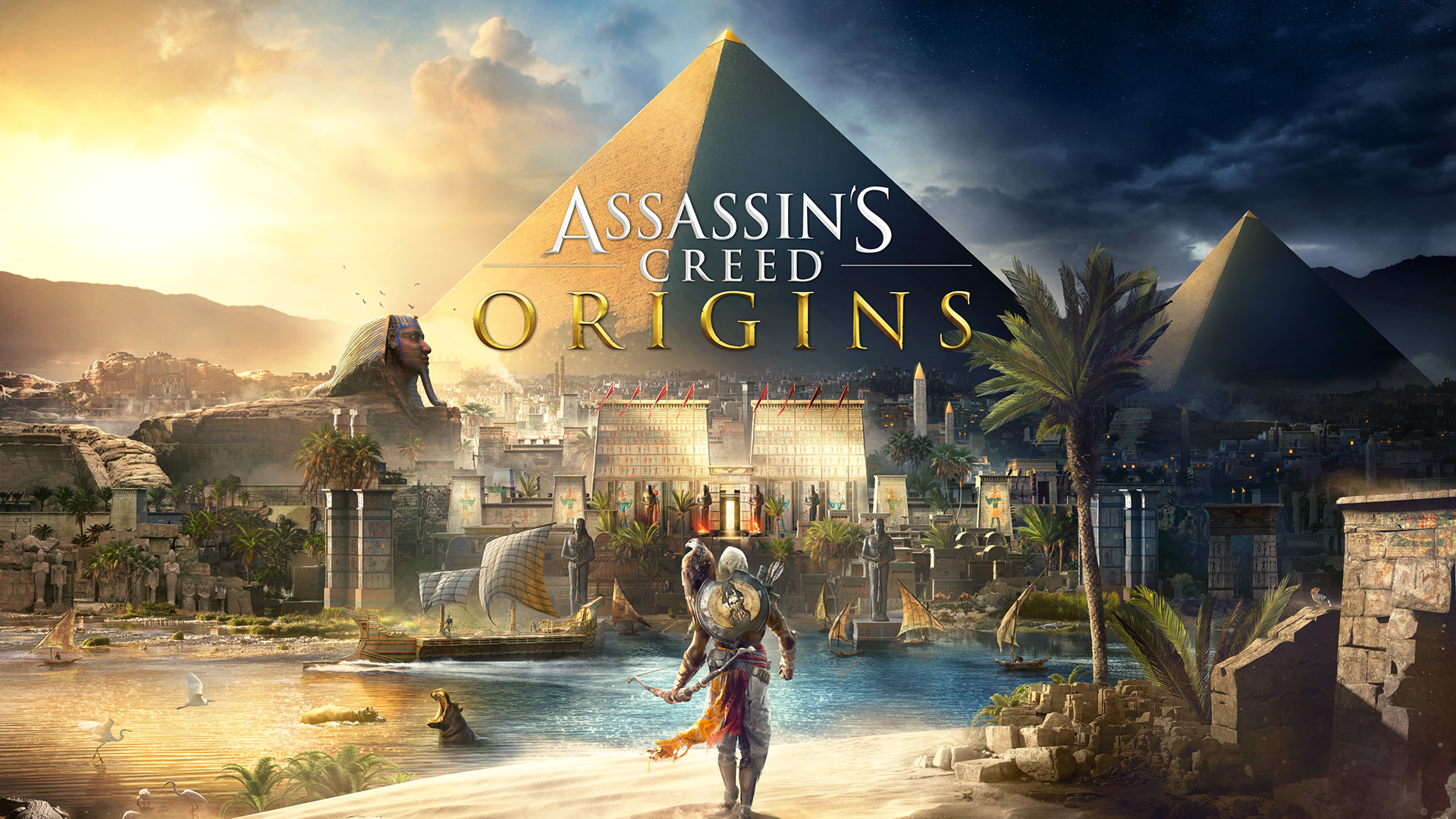 The Assassin’s Creed brand took a massive hit to its reputation when Assassin’s Creed Unity (2014) came out. Technically broken and glitchy, it sent the series into a downward spiral, even after subsequent patches got the game into a playable state. Not even Syndicate (2015), a much better release, could undo the damage. Ubisoft Montreal wisely took a hiatus before finally reemerging from the shadows with Assassin’s Creed Origins.

It’s just as the name says: this is the first chronological entry in the series, answering the many hanging questions from past titles. For example, why does an Assassin cut off a finger when they’re initiated? It’s a small detail but now, at last, we understand why.

Assassin’s Creed Origins is unfettered by the convoluted lore that’s been bogging down the series, making it the perfect jumping point for new players. Hardcore fans will still be pleased by how much Ubisoft has tried to stick to the canon, with plenty of nods and winks to the previous entries and even the Watch Dogs games. You play as Bayek, a Medjay (pronounced “Med-jai”) out to avenge the death of his son. The story isn’t remarkable by itself and is pretty much standard fare, though there are a few twists that spice things up. Bayek’s journey for revenge introduces him to many influential figures such as Cleopatra, Caesar, and Ptolemy. If you know your ancient Egyptian history you’ll probably find it cool, if a little incredulous.

The game starts off in Siwa, after Bayek returns from assassinating one of his son’s murderers. Don’t worry, you’ll get to kill the target as its part of the tutorial, but once in Siwa you’re pretty much left on your own.

Exploration is done through parkour, as is the norm, and Bayek controls as well as any of the past protagonists. Sadly, that also means the issues plaguing the movement system also return. Climbing is once more a slow and boring affair since the grapple gun, introduced in Syndicate, has been taken out of the equation. An upgrade to Bayek’s climbing speed, like the one in Middle Earth: Shadow of War, would be very much appreciated here.

Having said that, one of the best things about Assassin’s Creed Origins is its open-ended freedom. For example, Bayek must assassinate a certain person in Siwa to progress. In most games, that target only spawns once you begin the mission. In Origins, however, the target is already out and about. Without realizing it, I killed this person during one of my exploratory jaunts, inadvertently advancing the plot. It reminds me of Bethesda’s The Elder Scrolls III: Morrowind, but seeing this approach used in a stagnating series like Assassin’s Creed is a breath of fresh air.

Once the Siwa target is dead, you’re free to move on and explore the world at large. At first blush, Siwa is an impressive map. You can easily spend hours in the area, hunting animals, doing side missions, or simply fool around. However, in the grand scheme of things, Siwa is just a drop in the bucket – Origins’s map is reportedly four times the size of Assassin’s Creed IV: Black Flag (2013). If you’ve played that seminal entry in the series then you’ll know how big that game was. Now imagine that multiplied by four, with most of the world map explorable on foot. It’s not just filler, either, as there are numerous areas to explore and side missions to try, including chariot races and arena fights.

While most of the side missions are simplistic, they all come with some narrative that fleshes out the in-game world. A select few even rewards you with rare gear and outfits. Since equipment drops are random, you’ll want to explore and do as many optional activities as you can, just to get more loot. However, the game does need more quick travel points, at least for certain areas of the map.

Tools of the trade

Speaking of loot, Assassin’s Creed Origins has massive amounts of it. From different weapon types – swords, scepters, spears, and more! – to equipment, you’ll constantly find gear no matter what you do. Early gear in most games are usually considered disposable, but Origins allows you to upgrade weapons so that something can be just as effective at level 20 as it was at level 5. They come in various rarities too, with the rarer ones containing skills that might be useful to your play style.

Similarly, you can also upgrade Bayek’s armor and equipment by using animal skins and other crafting ingredients. To get those coveted skins you have to hunt various animals such as lions and hippos. Progress far enough down a certain skill tree and you’ll even gain the ability to befriend them, turning these animals into impromptu bodyguards.

No matter the amount of weaponry, Assassin’s Creed Origins is still very much a stealth game, where sneaking is the optimal route to success. Weirdly, it lacks the cover system found in previous games. It’s nothing major, but not being able to perform a corner kill feels strange.

Origins loses the special vision modes as well. Instead, you need to make use of Bayek’s eagle, Senu, to tag targets. You can manually control her and, later, even make her attack. This revamped Eagle Vision is great for scouting the various areas you’ll infiltrate, giving you an advanced look at the layout, enemies, and objectives.

The RPG-like experience does return but it’s now much deeper. Bayek has three skill trees that unlock a multitude of skills and gear, requiring ability points gained from leveling. It’s up to you to customize your particular Bayek, meaning your experience may be different from your friends’.

An eye for an eye

Battles in Assassin’s Creed Origins are much more fluid and dynamic thanks to the new combat system. Enemies gang up on you and are much more relentless, especially when fighting at range. Blocking, dodging, and parrying are given as much importance as the damage you’re dealing, which means fighting intelligently rather than button mashing is usually the order of the day.

Sadly, the system has a few issues that still need to be worked on. Your weapon strikes don’t have the weight and feel you’d expect because the moves don’t convey their lethality well; attacks that look like they should decapitate or dismember don’t, making it seem as if Bayek is mauling people with blunt blades.

Blocking is problematic too. When faced by more than one enemy, as you usually will be, locking on to a target will almost always get you stabbed in the back. If you don’t lock on, however, the collision detection is iffy enough to make enemy attacks connect even when you’re blocking. It makes countering largely hit or miss, since being slightly out of alignment can mean disaster even if you time it right.

Ranged combat, on the other hand, is very satisfying. Depending on the bow, your ranged attacks may be geared towards sniping, rapid fire, or dealing massive damage. It’s a great system that promotes flexibility. Another nice touch is that the game shows how much damage you’ll do, so you know if you can kill that guard with a single hit. The enemies themselves could also be improved as the AI tends to be forgiving, even on the higher difficulties. Unless you’re discovered in a heavily trafficked area, there’s a very good chance that other nearby enemies aren’t even aware of what’s happening.

On a PS4 Pro, Assassin’s Creed Origins runs as smooth as silk… most of the time, anyways. There are stutters and noticeable frame drops in large areas or when there are loads of enemies, but it’s nowhere near serious enough to make the game unplayable. Weirdly, however, a majority of these frame rate issues occur during the game’s numerous real-time cutscenes. It gets so bad in some of them that the characters move like wooden puppets. Other than those frame rate hitches, Origins is a visual feast. The new engine and talent behind it helps make this the best-looking Assassin’s Creed yet.

While Black Flag had the best score in the series (mostly due to its awesome sea shanties), Origins does have its share of decent music. Plus, Bayek’s voice acting is especially well done; he makes some of the side missions stand out more than the story thanks to the rather funny dialogue. The humor helps make Bayek seem much more believable, and certainly more likeable, than some of the older protagonists. It seems like Ubisoft’s decision to put the series on hiatus was the right call. Assassin’s Creed Origins blows every other entry out of the water, in nearly every category. It’s bigger, better, prettier, and much more involved than any of the previous games. It certainly qualifies as ‘Game of the Year’ material, which is no small claim considering the incredible titles we’ve seen this year. Whether you’re an old school fan or somebody who’s never tried an Assassin’s Creed game before, you need to play Origins. It’s just that good.

Assassin’s Creed Origins is out now for PC, PlayStation 4, and Xbox One.
Developed and published by Ubisoft.
A copy was provided for review.

Sal's just your average hardcore gamer. He started gaming on the NES in the 80s and has been ever playing since. Sal doesn't care about which platforms games are on, only that he wants to play them all!
Previous post Nokia 3310 3G’s Snake: Was it worth the update?
Next post $678 Monster Hunter: World PS4 Pro bundle confirmed for SG