Review: A tale of blood and sand in Assassin’s Creed Odyssey 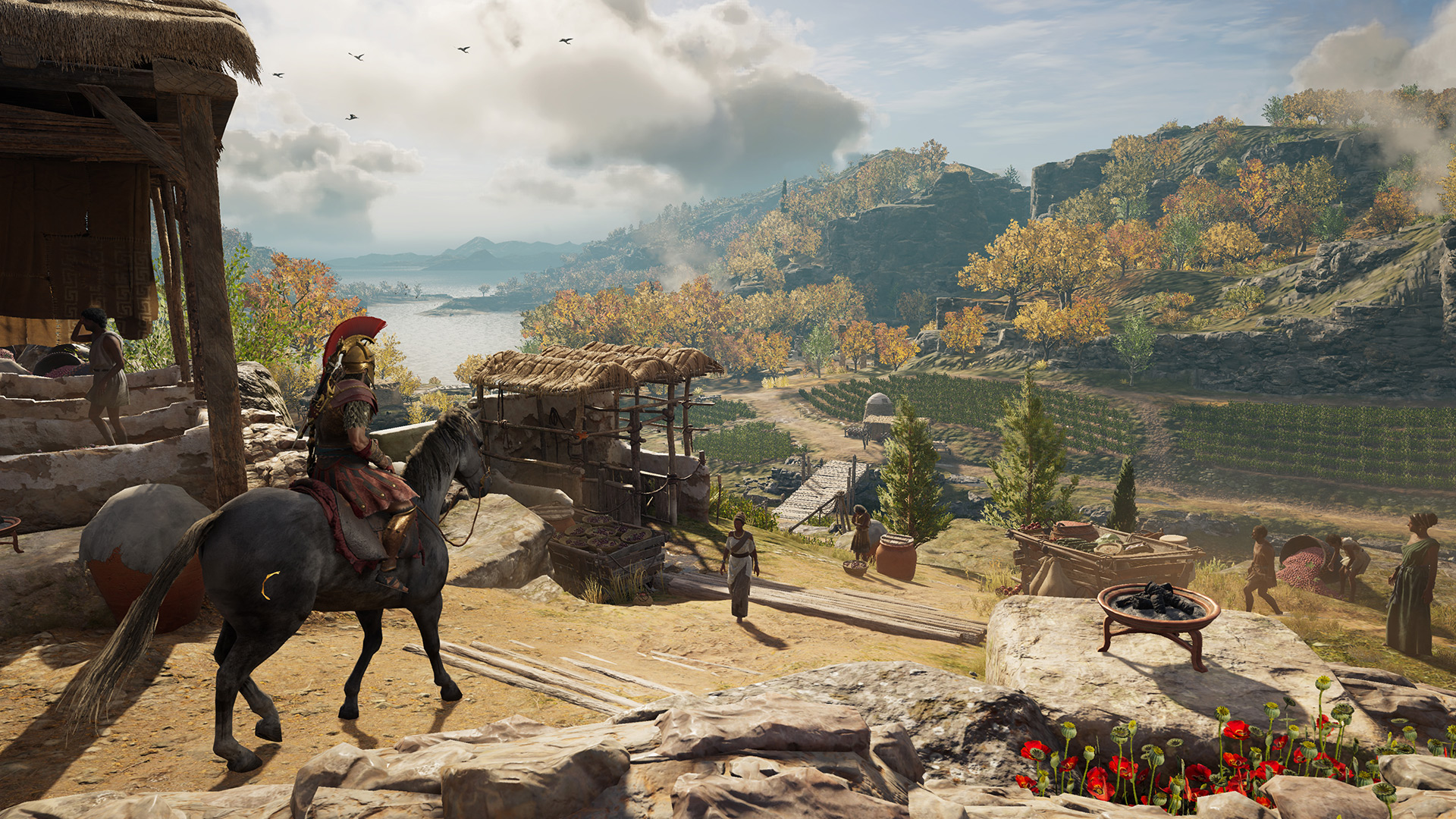 Where do you go after successfully overhauling a stagnating series? For Ubisoft, the answer seems to be Ancient Greece.

Set centuries before Bayek of Siwa roamed Egypt, Assassin’s Creed Odyssey is the culmination of all the lessons learned from Origins (review here), with the naval elements of Black Flag and Rogue thrown in for good measure. With pedigree like that, it’s no wonder that Odyssey is one of the best, if not the best, entry in the series yet. Dunes and desert make way to sandy white beaches, rolling hills and open plains as Egypt is replaced by Greece. For first impressions the game sure is a sight to behold in 4K, though there are shadow pop-in issues and slow-loading assets even on the PS4 Pro. For those wondering, Ubisoft didn’t give us options between Performance or Framerate modes.

Setting aside, Odyssey marks a massive change for the franchise: it’s the first game in the series to make the leap into full RPG territory. Origins may have laid the groundwork, but it’s Odyssey that takes it to the next step with different playable characters, choices that dictate the story, and a revamped skill system. Like any RPG, you can even choose dialogue responses or talk to other NPCs.

With a focus on characters, it’s no wonder that conversations now take place closer to the screen. It’s a welcome change, though the lip syncing can be off sometimes. While not that distracting, it’s nowhere near the incredibly realistic lip and facial animations achieved in NetherRealm Studios’ Injustice 2 (our review). Playing as either Kassandra or Alexios, you’ll explore ancient Greece and play a personal role in the spat between Athens and Sparta. As a mercenary, you’ll actively dictate the course of the war, influencing which faction controls each of the game’s various territories.

You do this by disrupting the controlling faction through assassination, theft, and outright sabotage. It’s a great way to encourage exploration of the massive maps and its many locations sprinkled throughout, as no matter what you do you’re still having an impact on the world.

Once you’ve whittled down the faction’s hold on a region it culminates in an epic brawl, both sides meeting on the battlefield with AI soldiers clashing all around you. Stealth is completely thrown out of the window as you’re tasked with killing as fast as possible to weaken the enemy force.

It’s something akin to a stage from Koei Tecmo’s Warriors games and is unlike anything we’ve ever seen in this series before. It’s cool, even if restricting and out of place. This focus on melee combat is a disservice to those who built their characters for stealth too, especially in the early stages when ability points are scarce. All that’s on top of your personal mission to slaughter the Cult of Kosmos and to discover your true parentage. Hunting down the cultists ties in to the side quests you can do in the various regions. Most of them aren’t essential, but it’s great that doing them actually ties in to something more substantial. There are also daily and weekly quests to try, with some awarding rare gear and Oricalcum, a new rare currency that can be traded for top-tier gear.

Speaking of melee combat, it returns with a few tweaks. Shields are now gone, so there’s a greater focus on dodging and parrying. Hammering the light or heavy attack buttons to execute combos is easy enough, but I wish there’s a bit more depth to them. The combat skills you learn are bound to shortcut buttons and can easily be activated in the midst of battle, which is a plus whenever you desperately need a health boost.

There’s also a new bounty system now. Killing innocents or the governing soldiers will raise your bounty meter, attracting the game’s bounty hunters. These are elite enemies, like the Phylakitai from Origins, and can drop rare gear when defeated. They’re pretty strong to boot, and a high enough bounty will see a constant stream of them chasing you down. I once had to fight off four different hunters at once. 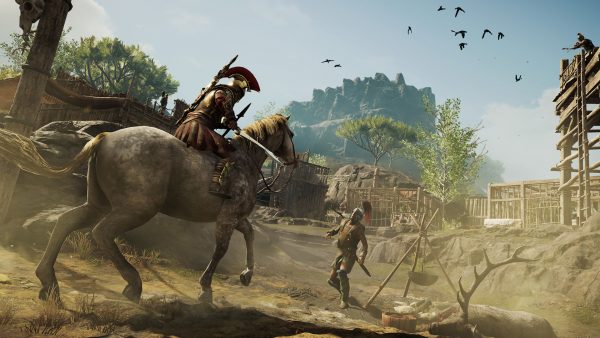 These mercenaries are all unique, with their own titles and history, though I wish had Ubisoft went the Middle-Earth: Shadow of War route by implementing a Nemesis system for even more personality.

Weapons and gear, which can be found as random drops, bought or received as rewards, now provide different boosts too. Equipping gear to maximize damage in your preferred playstyle is essential, and you might not even stealth kill enemies if your Assassin damage is too low — a huge departure from most other games where a sneak attack means instant death.

Those who played Origins will probably lament on Odyssey’s changed weapons, particularly the bow. Where there were three, now there’s only one. The special abilities that were bound to the different bow types — such as guided arrows and multiple arrows — all return, though this time they’re relegated to special skills that build a meter to activate.

I honestly think that’s a step in the right direction, though it’s certainly not “there” just yet. It cuts down on the guided arrow spam but weapons now feel less unique, with ranged combat taking a backseat. You can’t just use arrows to clear out entire bases like in Origins any more. 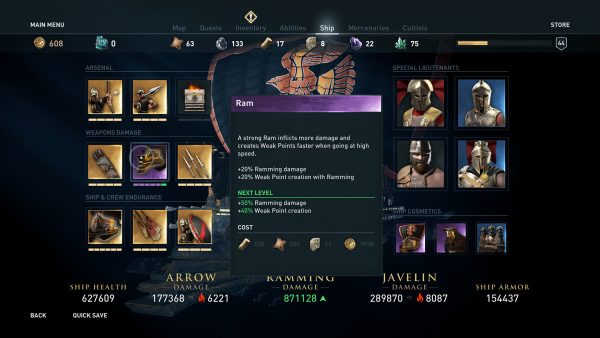 Even with all the side quests, exploration is sadly as uninteresting as before. To mark a location as fully explored, you’ll need to complete all objectives in the location. These don’t really change for most of the places you visit, making them rather boring after a while. This was already an issue in Origins and, for some reason, is still present here.

At least Ubisoft attempts to switch things up with the Exploration mode, which doesn’t explicitly tell you where to go to and instead drops hints on its location. Having to actually search on your own does make it a little bit more interesting, and it’s definitely the recommended way to play. However, those who still want to follow waypoints can always stick with the Guided mode.

The overall gameplay cycle is largely unchanged as well. It’s always advisable to send in the eagle Ikaros to scout and mark enemies and objectives before heading in yourself. It’s fun, especially if you’ve never played Origins, though there can be lengthy load times if Ikaros flies a distance from your character. What Origins didn’t have is a player ship to sail the ocean with. As captain, you’re in charge of recruiting lieutenants to serve as enforcers on your ship. Recruitment only works on enemies you’ve knocked out, whether it’s from the new arrow type, certain skills, or via stealth. Alas, I wish the whole concept was a bit more fleshed out.

Lieutenants don’t really do much except for adding passive bonuses or serving as distractions in combat.  You can only have a certain number of them active as well, meaning you’re going to have to be picky on who gets the coveted position.

Ship combat is generally similar to Black Flag and Rogue, though the lack of gunpowder makes it a less explosive affair. I miss blowing chunks off enemy ships with a barrage of cannon fire; javelins and arrows place just don’t have the same oomph. Another downside is that those great sea shanties aren’t in English any more. They’re still pleasing to hear, but not understanding the words loses its impact. However, the new theme is still very good with its haunting vocals, perfect for when you’re just chilling on the seas. In some ways, Assassin’s Creed Odyssey completes the journey that Origins started. It might feel a bit too familiar and not as refreshing but, with all the refinements and improvements added, and the reintroduction of naval combat, it truly does manage to stand on its own merits.  This is definitely one game you shouldn’t overlook in a holiday season full of AAA titles.

Assassin’s Creed Odyssey is out now for PC, PlayStation 4, and Xbox One.
Developed and published by Ubisoft.
A PS4 copy was provided for review. Sal's just your average hardcore gamer. He started gaming on the NES in the 80s and has been ever playing since. Sal doesn't care about which platforms games are on, only that he wants to play them all!
Previous post Are the Jabra Elite 45e and 65e wireless headsets suited for mobile gaming?
Next post Singtel’s cements collaborative efforts to grow eSports