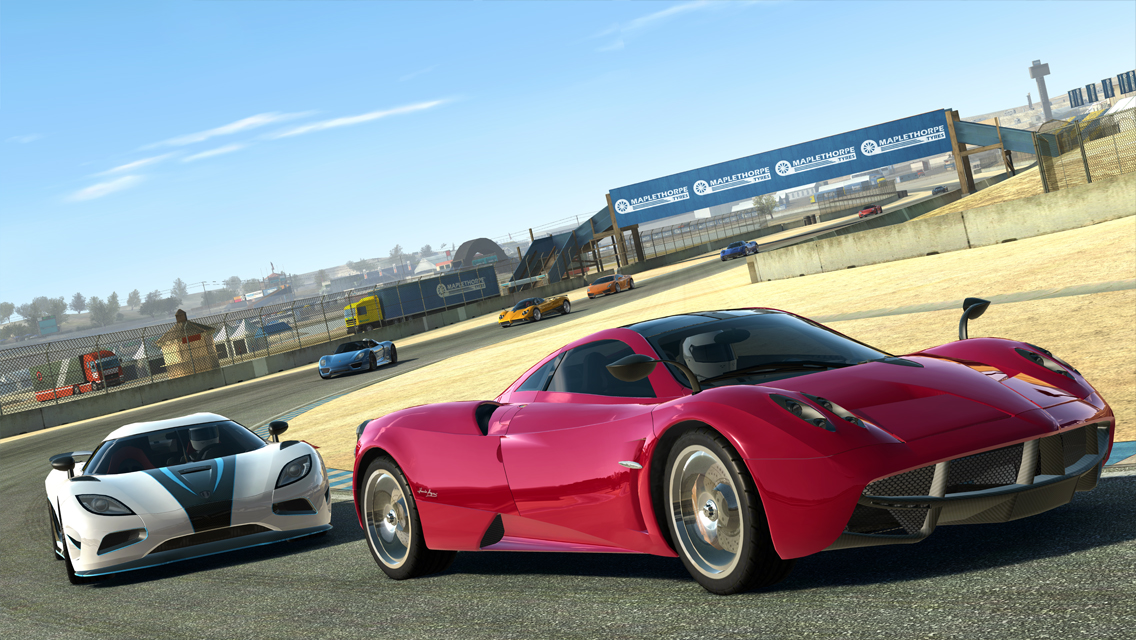 EA/Firemonkey’s latest hot racing title to hit the App Store, Real Racing 3, takes another step up in its level of realism, but that realism is not just about the cars.

Real Racing 3 is the third racing title from Australian developers Firemint, subsequently absorbed into EA and merged with IronMonkey and now called FireMonkey. It skips off being a priced App Store title to the Freemium model, which makes the game free, with some quirks.

But first, Real Racing is just as impressive as ever. The game has 46 licensed real-world vehicles, a host of real-world tracks and several race types ranging from your standard race, elimination races, endurance races to autocross, head-to-head and speed record events.

Not to mention that the graphics are still pretty stunning kicking off from the first-launch intro sequence. There was a bit of detail loss on the cars away from mine playing on my iPhone 4S and I did feel everything else was something I’ve seen before, but you have to keep in mind that you’re holding some pretty brilliant console-level graphics in your hands.

That aside, you begin to hit your first wall as soon as you get your first car. Oh, yes. You have to wait 2 minutes for your car to be shipped after you drop your virtual cash over to the dealer, just like real life. Or you could drop some premium currency in the form of Gold, if you can’t wait. The price of freemium. (This may have changed after time of writing. EA has the ability to silently tweak the wait timers in the game)

Once you do get your car, your first race proper has you racing with what the game calls “real people” which, in fact, they are, except it’s not in real time. The multiplayer feature of the preceding Real Racing games aren’t here, and seemingly in its place is Real Racing 3’s TSM.

Time Shift Multiplayer is a the game’s dynamic pseudo-multiplayer feature. It takes the performance time and speed and permutes it into how your opponents perform resulting in a group of up to 22 opponents that range from the swift to the slow. but even though these aren’t real humans driving, it still provides a sense of realism, though you won’t see them forcing you off the road or rage-crashing. Some instances of race imbalance can be seen, like if you’re not performing too well, you will never have any hope of catching up to your opponents. The social aspects of the game comes in when your Facebook or Game Center friends beat your time, earning you the chance to beat theirs, utilising the handy push notifications on iOS to brag about it.

The game is pretty lengthy considering the amount of racing you can do in one racing series alone, also considering the fact that EA and Firemonkey have a level 1000 Game Center achievement waiting for players willing to climb that far ahead. Do well at races and you’ll earn more cash and fame to level up and get a cash and Gold bonus. Continue to do well and you’ll unlock the next tier of events and earn yourself some extra cash.

The controls follow the set introduced in Real Racing 2 ranging from tilting, steering or tapping. Being a brash, lazy racer, I found myself not used to the tilt controls very much, despite the fact it provides the most realism. Tapping was always my way to go and it provides more precise controls. Other tweaks are the steering assist, traction control and brake assist, which will help slow your vehicle down at difficult turns, but could prove a problem for speed-based events.

If you do like the brake assist, then it’ll be useful to upgrade your vehicle from time to time to speed it up a little. Naturally, these will not only cost a bit of cash, leaving you to decide between upgrades or the purchase of a new car, and both will cost a bit of time for the game to deliver. Upgrades, however, do not disable your vehicle and you’re free to race them just as they were before your new engine arrives, unless your car made friends with the wall recently.

Repairs and servicing are two more aspects of Real Racing. In a recent update, EA has removed the timers for external repairs such as for the windshield or your muffler, but if you need new tyres, your engine fixed or oil changed, you’ll have to wait. Stacking up servicing can extend your waiting times for several hours. So it’ll always be a good idea to have a second car when you can afford it.

Despite my usual gripes with in-app purchases and premium currency, this game is very much the Real Racing one expects to be paying good money for on consoles, and now it’s freemium. It makes full use of the iPhone 5’s wider screen and all of its added graphical capabilities. You can still play this game very well without coughing up for in-app purchases, just not as fast.