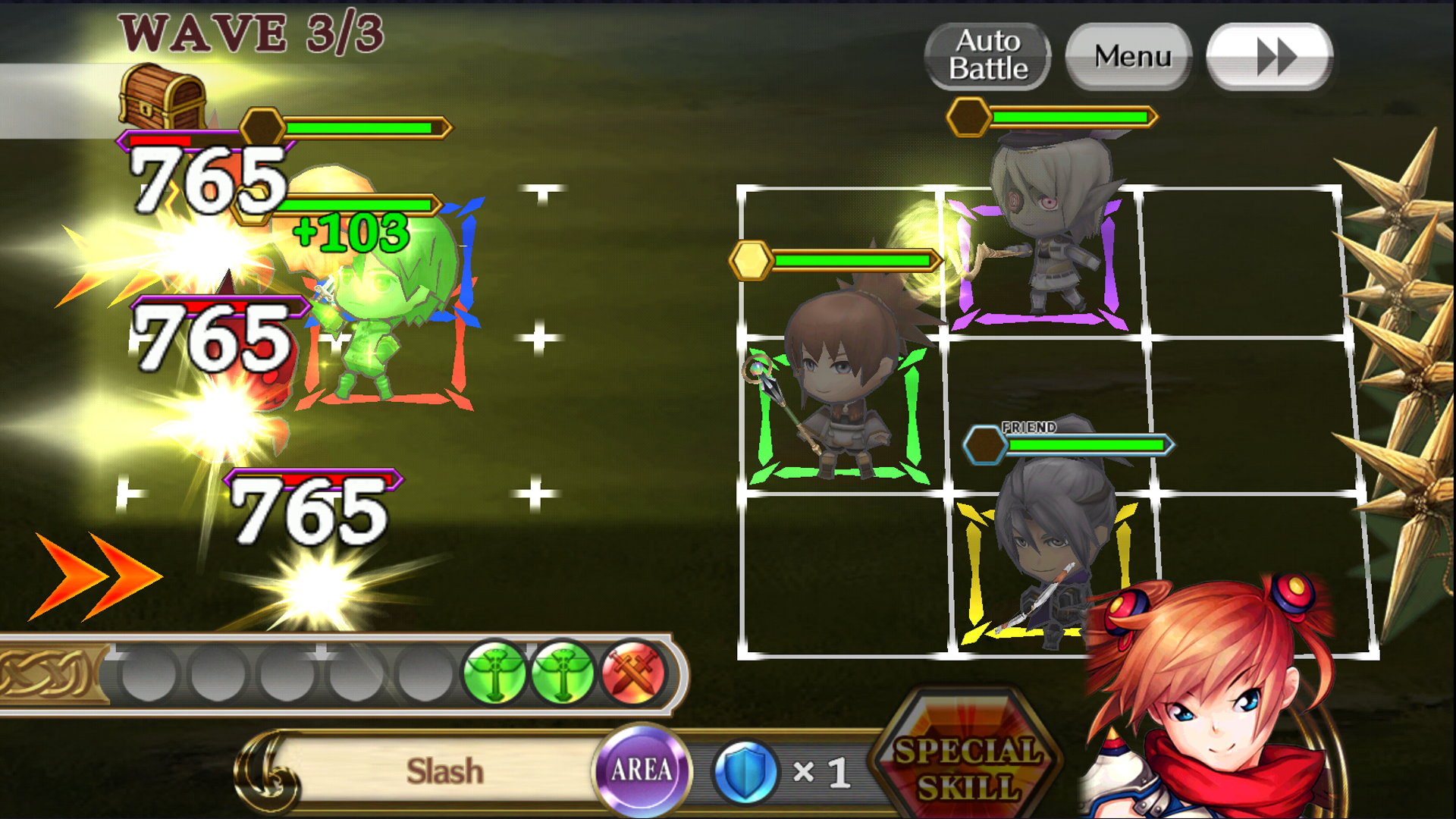 It’s easy to see that certain game genres dominate app stores. Rather than break conventions, Gumi and Sega decided to work within them to give us Chain Chronicle, a blend of line defence, hero collection, and JRPG. While it succeeds in being competent at each, it’s the snippets of story that unexpectedly seals the deal.

The thing about hero collection is that you run into a lot of faceless characters, merely fuel for the great grind machine. Chain Chronicle fixes this by giving you actual voiced characters, ones with story quests attached. Said quests are short, simple, stereotypical, and take away precious Action Points (AP) from larger events, but they bring life to a normally dead aspect of the genre. As added incentive you’ll either unlock that character’s special ability or earn Prysma, valuable gems used for a myriad of things.

Another highlight for Chain Chronicle lies in its combat: a line defence which calls for basic tactics. What makes it special are two particular features, the first being their approach to Auto Battle. Players can still override the AI’s input so you could leave the targeting to the computer while focusing on skills and positioning.

by gumi Inc. and Sega

Skills are the other fun bit. Using them requires mana, a limited resource provided at the start of each wave and intermittently during a boss battle. You can chain these skills to make the subsequent ones stronger, and there’s a gold bonus for nailing the last enemy with one too. In short, pay some attention to the fight.

The hero collection aspect is far more straight-forward. You accumulate coins to purchase cards fast, to the point where I have more pending upgrades than the gold to pay for it. Add on the daily quests and events to the mix and there’ll be plenty of opportunities to stock up.

A popular complaint among players is the AP regeneration rate. As harder fights require more AP, gameplay will eventually be limited to five to ten minutes a session before you wait another eight hours or so. I’m actually okay with this, considering it makes for a quick-and-easy distraction, reduces how often you get nagged to play the damn thing, and also because Chain Chronicle honestly won’t hold up for longer sessions.

The only items you can buy with cash at any moment are Prysma, although acquiring them is pretty fast given the number of side quests. Events don’t feel like cash grab season either, so it’s safe to say that monetization isn’t very aggressive – except for those limited offers that pop up occasionally.

For a mobile app I have to say, Chain Chronicle turned out better than expected. A shame how the character quests don’t mix up the actual combat but I’m thankful to even get such quests in the first place! I hope this lays the groundwork for Gumi and Sega to produce greater things in the future.

Assessed on a Sony Experia Z running Android 4.4 and CMOD.  Prices are accurate at time of print.­

Ade thinks there's nothing quite like a good game and a snug headcrab. He grew up with HIDEO KOJIMA's Metal Gear Solid, lives for RPGs, and is waiting for light guns to make their comeback.
Previous post Heroes of the Storm Begins Offering Founder’s Packs
Next post ASUS Announces Strix GTX 960