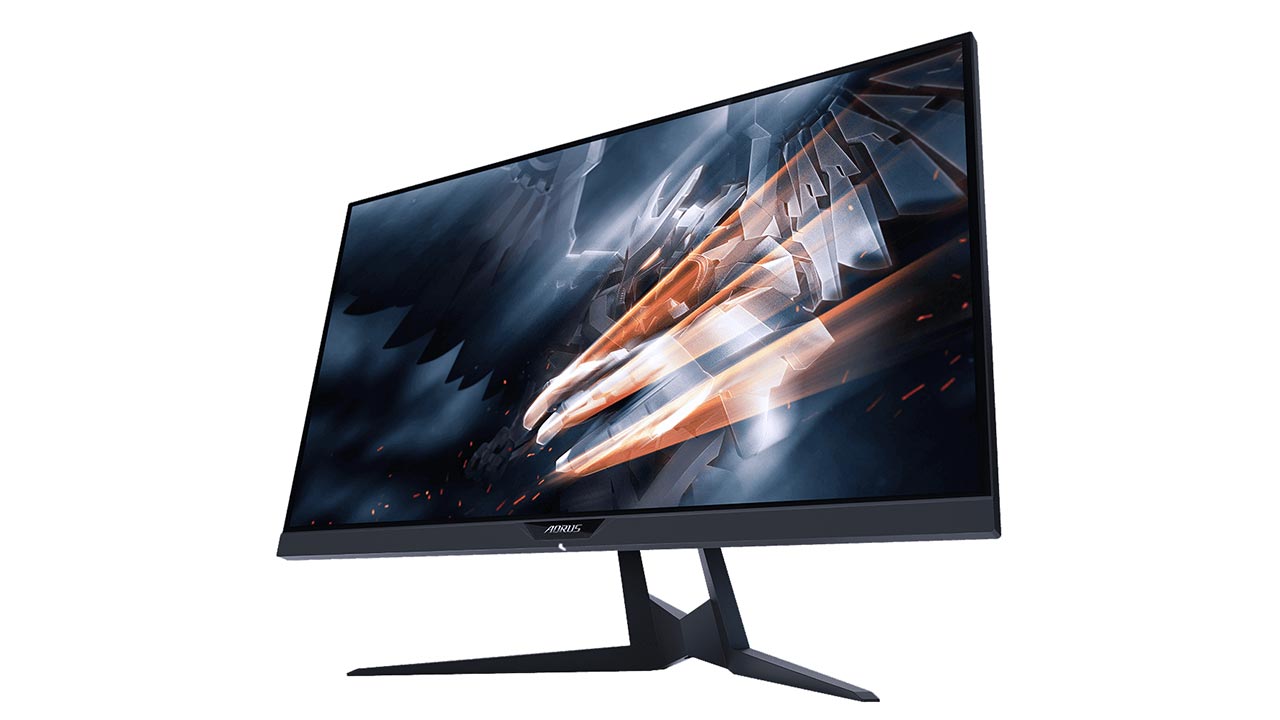 GIGABYTE’s gaming brand AORUS has been pumping out several firsts in their line-up as of late and, this year, it’s a high-end monitor. The AORUS AD27QD is a 27-inch, 1440p 144Hz offering that seems to check all the marks for a gaming display, and as far as firsts go it makes a seriously enticing proposition for one’s battlestation.

I say “battlestation” because there’s often loads of aesthetic pride when it comes to these DIY-built gaming PCs, and the AD27QD is likely to meet some of those stylistic requirements. Yet the business-end of this monitor delivers great gaming performance and is slim enough for multi-monitor setups. There’s even something new in the “gimmicky” features section: a pair of integrated active noise-cancelling (ANC) microphones that may prove useful for some. 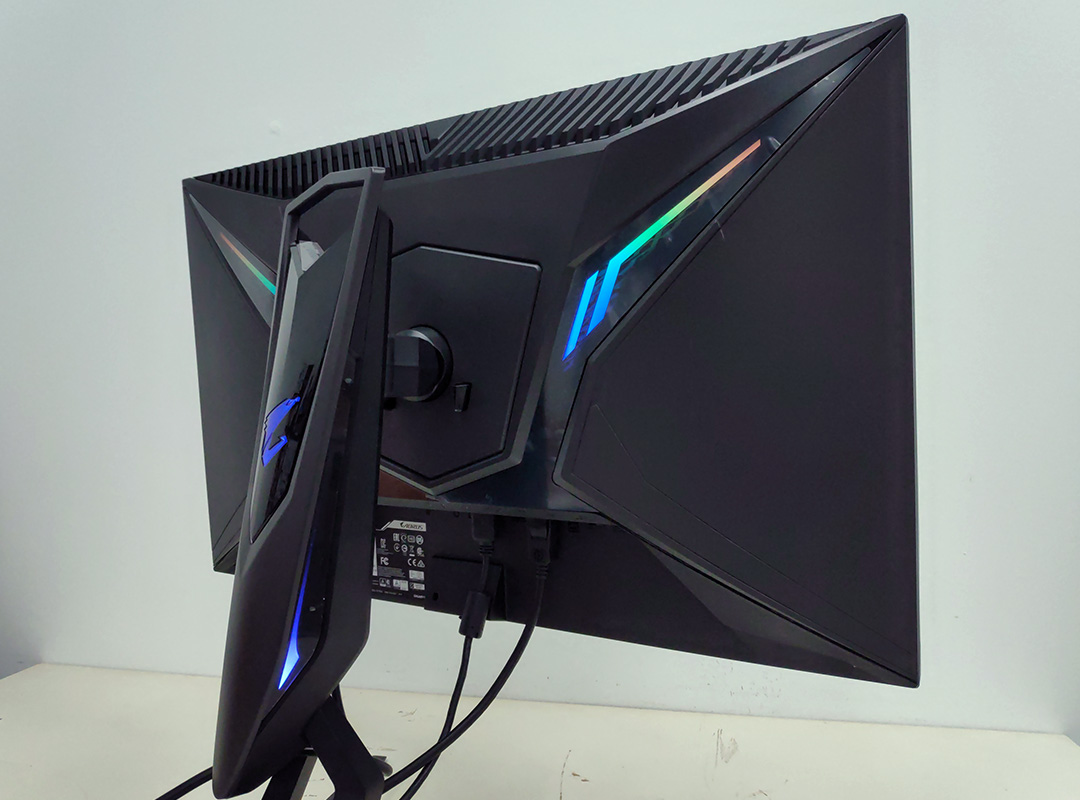 Did somebody say falcons? AORUS took the whole RGB trend and went to town with it here.

The AORUS logo features a falcon, so you can bet that their first monitor takes plenty of inspiration from one. Depending on who you ask, the lights on the rear panel either looks like a pair of outstretched wings or a head-on view of a bird of prey. Those customizable RGB lights are on the stand too, which from an angle also looks like a falcon’s head. It’s all very stylized, of course, banking heavily on one’s approval of aggressive gamer-gear designs.

That stand comes with all the ergonomic adjustments we’ve come to expect, with a full 90-degree pivot and a good 130mm of vertical travel. The swivel only goes 20 degrees either way, less than some other models in this range, though it’s still usable for local party games or competitive match reviews. It sits on two-pronged feet which doesn’t take up much space, but it exhibits some monitor wobbling when nudged and has a relatively chunky spine adding to its table depth. You can place the monitor on a VESA 100 mount if you’d like, but I reckon the stand plays a big part in the AD27QD’s appeal. 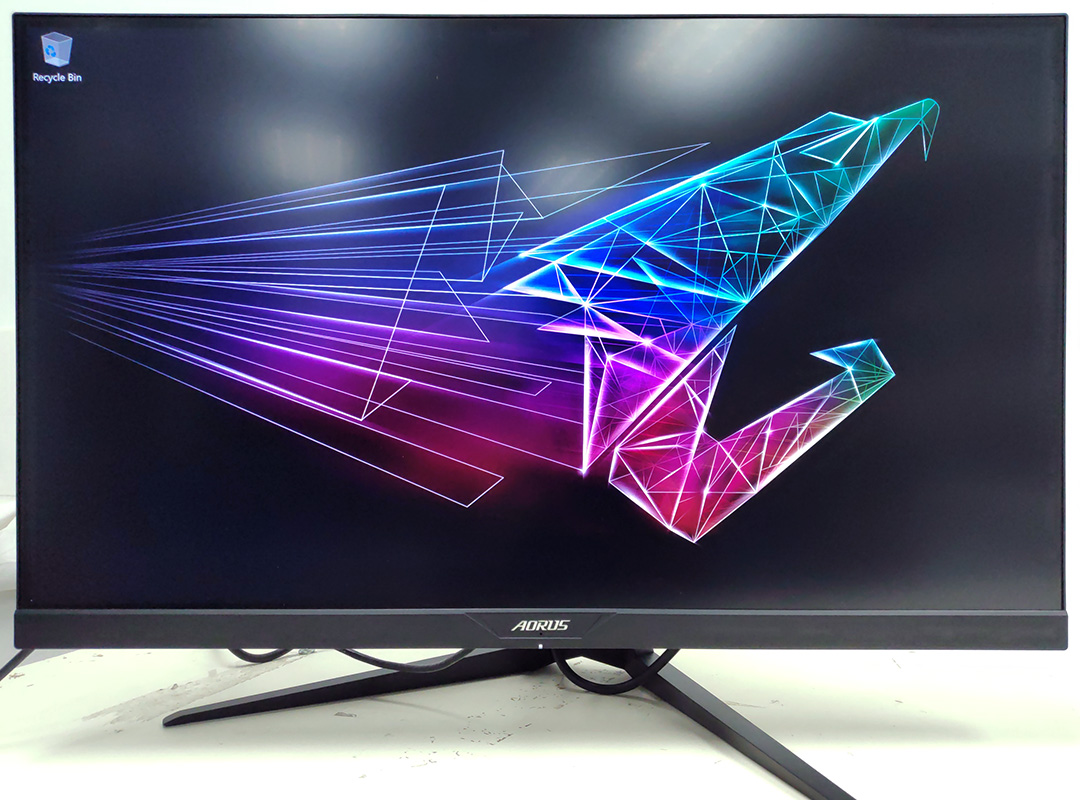 Slim bezels and borders framing a fantastically sharp panel. Just be careful of your room’s lighting, though.

Swing over to the front and you’ll find that AORUS has reigned in their style sense, keeping only their typeface logo on the matt, two-toned finish. The side bezels and borders measure approximately 0.8 to 0.9 centimeters, thin enough for a multi-monitor set-up. It’s a contemporary look that reserves all the attention for the panel, and rightly so because image quality is respectably good.

The AD27QD is a 1440p display (2560 × 1440 resolution, 16:9 aspect ratio) which is, again, expected of most 27-inch models. It’s hooked up with AMD’s Freesync tech to maintain a smooth 144Hz refresh rate, matched to a 1ms response time to give this monitor its full gaming chops. Onboard enhancements such as Aim Stabilizer helps shuffle it down the competitive FPS route, reducing the movement blur from fast, scoped-in panning and weapon recoil to help gamers hunt and lock onto their targets better. 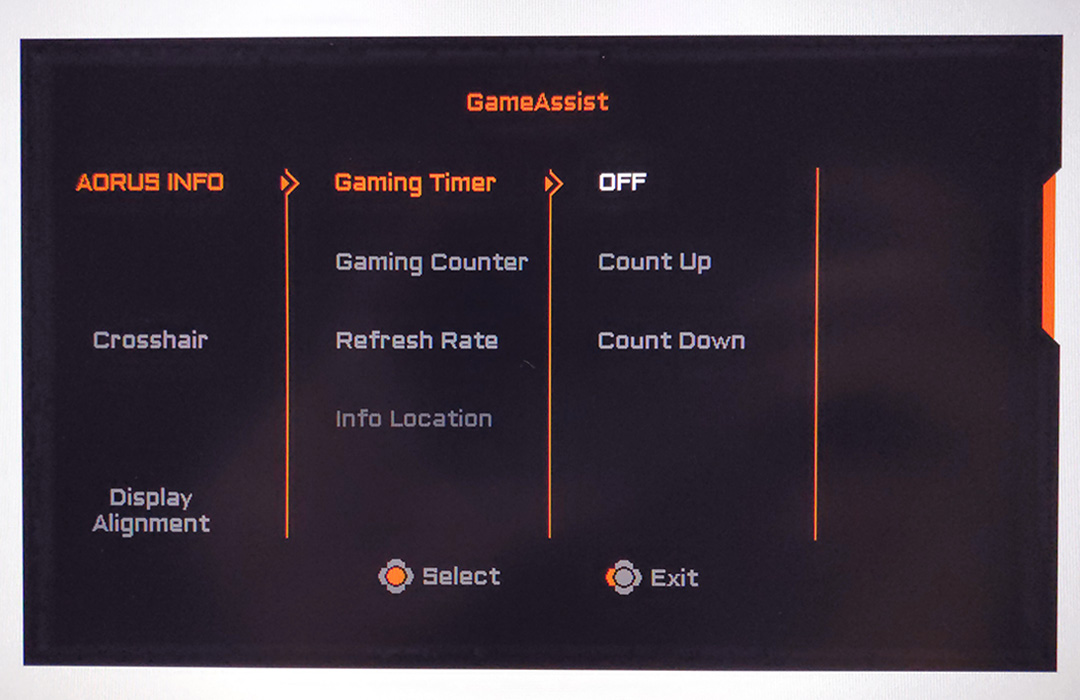 The usual selection of visual overlays to help you improve. Or just use the countdown timer to sneak in some extra gaming time.

Interestingly enough, AORUS went for an IPS panel to net the color-conscious crowd out. It’s an 8-bit + FRC (Frame Rate Control) configuration with 95% DCI-P3 coverage to support most enthusiast creative work – graphic design and video editing, growing amongst gaming communities, won’t be a problem here. On the entertainment spectrum, the AD27QD has earned the entry-level Display HDR400 certification to bring out highlights in compatible movies and games, though its reported brightness does exceed the requirements.

That combination of resolution, frame rate, and color is more than enough to have the AD27QD shortlisted for modern gaming needs, and the wide 178-degree viewing angles helps make up for the limited swivel range. While there isn’t much to complain about when it comes to blur, flicker, or its excellent response, the color does come a little short in the blues and blacks – the former in calibration test images, the latter in dark and high contrast scenes. Like most IPS monitors, backlight bleed and reflections can be somewhat problematic too, so be mindful of your overhead lighting and windows. 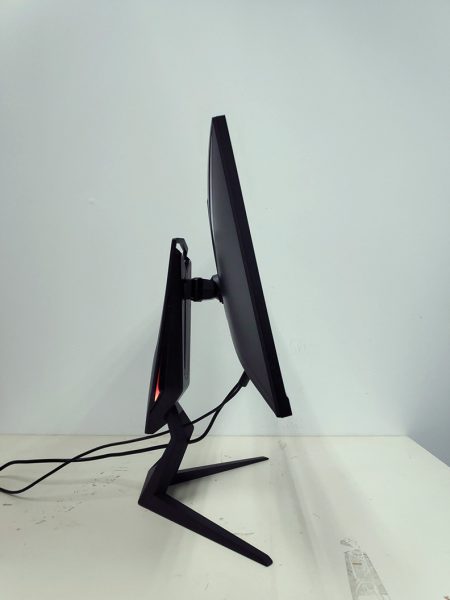 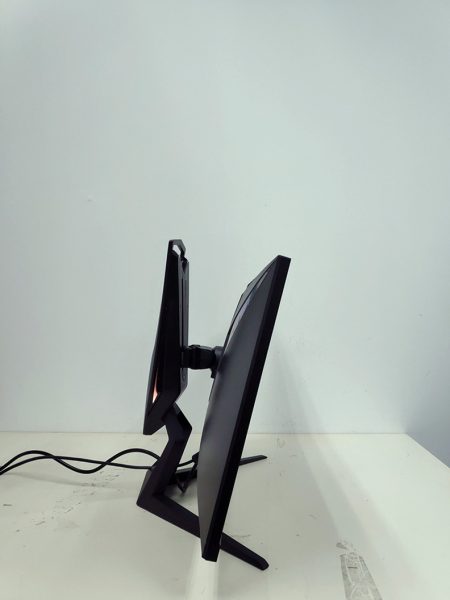 Even so, AORUS have upped the appeal with other useful features. Their OSD Sidekick lets you easily tweak monitor settings using a keyboard and mouse (thank you!), while the Black Stabilizer improves image quality in most regards. It also has on-screen options for crosshairs and system monitoring, though I’m mostly excited for its Picture-in-Picture support so you can display from two sources at once – great for watching videos and streams while on in-game farming runs, for example.

The AD27QD comes with one DisplayPort 1.2 and a pair of HDMI 2.0 ports to help with that (one cable of each provided), along with a pair of USB 3.1 ports capable of charging devices. Other connectivity inputs include a headphone and microphone jack, all located along the underside of the monitor, behind the centrally-located OSD joystick. It only has the one hole in the stand for cable management and the ports are all easily accessible. There’s no bulky power brick to contend with, either, as it’s sleekly integrated into the monitor.

Icon and text prints make it incredibly easy to find the port you need. 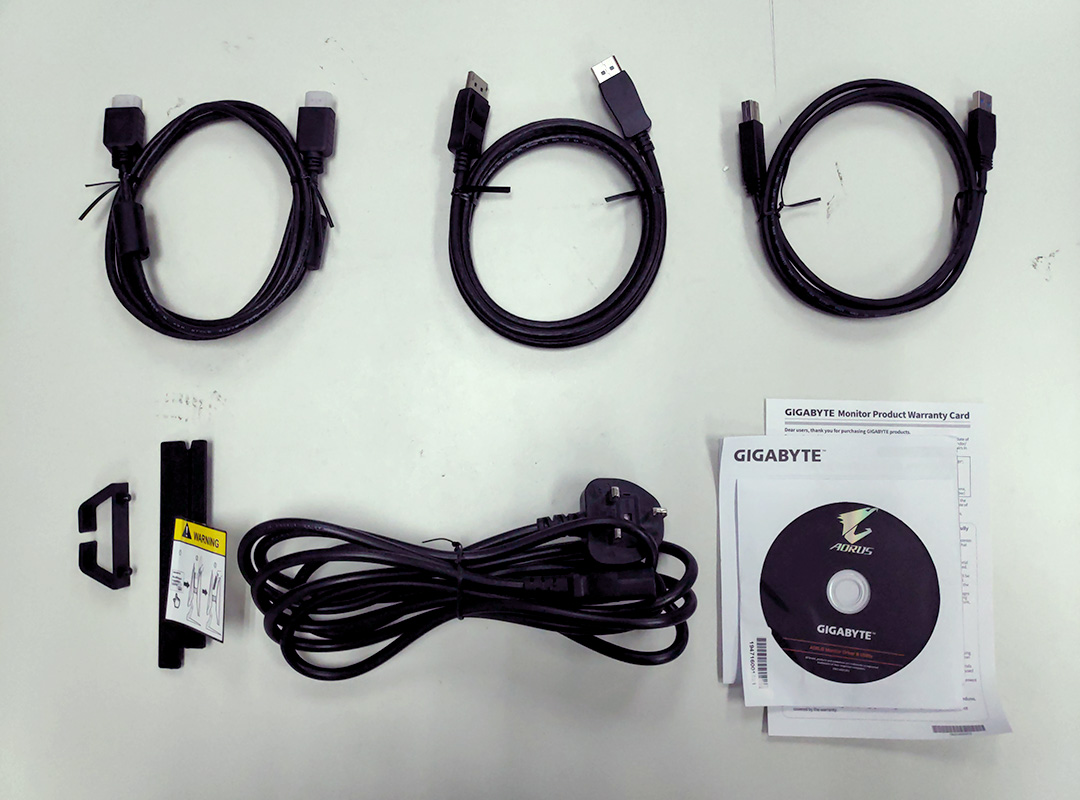 Included in the box: HDMI, DP, USB (upstream), and the power cable, plus the usual miscellany. That black tab with the label on it is a stay to keep the monitor at a certain height in the box — keep it if you need it!

Also in-built are unique dual ANC microphones. They only kick into action when a headset is plugged in, enhancing its noise removal capabilities for better outgoing voice chat. I can see how it might be useful in a LAN gaming set-up or in an esports arena, but nobody is going to willingly position their battlestation in a noisy corner of the home. Besides, with how good some of the microphones and noise cancelling are on modern gaming headsets, this seems more of a nice-to-have bonus rather than a killer feature for most. In a normal, air-conditioned room, the difference was more or less imperceptible. 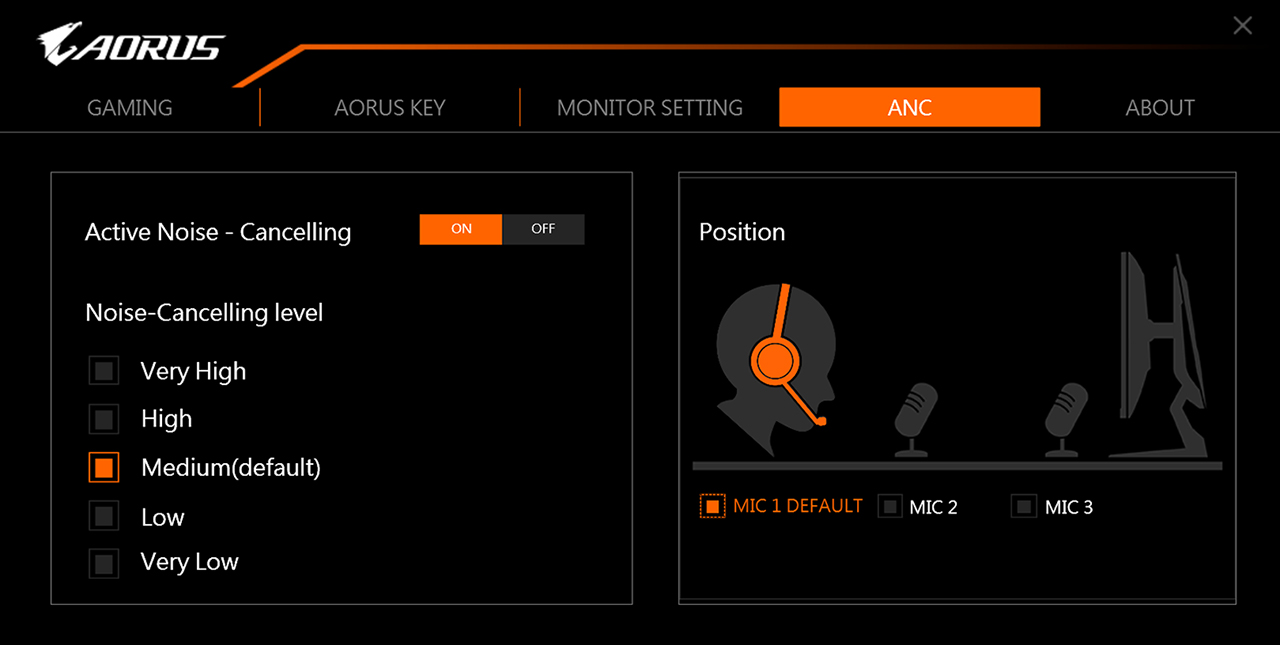 ANC options to determine what kind of microphone you use. It’s alright.

At US$599 (~S$813) the AORUS AD27QD is an excellent choice for gaming and multimedia use, bringing serious competition to product stalwarts such as Acer Predator and ASUS ROG. It sports a great all-rounded feature-set that serves most core gamers, and the Freesync support means its versatile enough for both AMD and modern NVIDIA graphics cards (the latter through a Jan 2019 driver update). It’s not going to be suitable for next-gen gaming, i.e. 4K HDR, but everyone else looking for a strong upgrade in 2019 should pay this falcon a visit.

A unit was loaned for review.
Header image: GIGABYTE AORUS

Ade thinks there's nothing quite like a good game and a snug headcrab. He grew up with HIDEO KOJIMA's Metal Gear Solid, lives for RPGs, and is waiting for light guns to make their comeback.
Previous post English version of Doraemon Story of Seasons to release in Southeast Asia
Next post 9th Gen Intel Core mobile processors now available