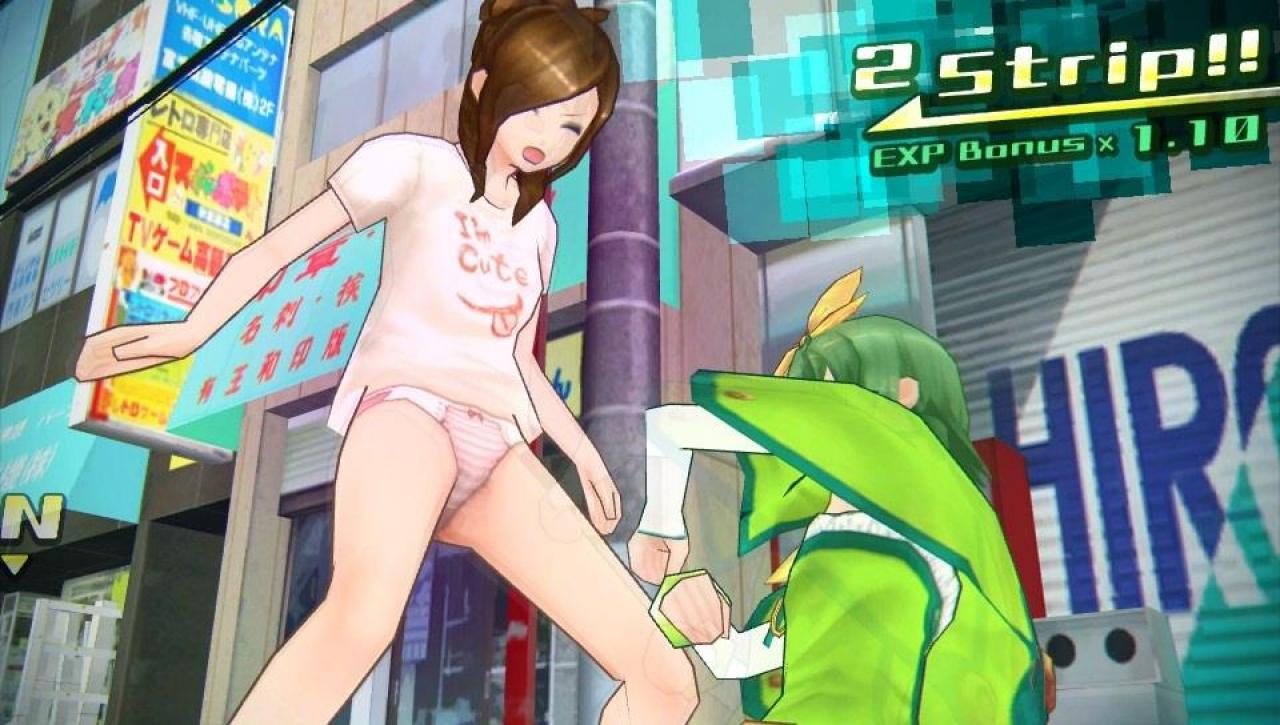 Gee, where do I begin with this one. Really, if you plan on playing this game, you probably belong in a certain demographic. And you should know what you want and expect to see in such a game, like this reviewer does.

Akiba Strip Akiba’s Trip: Undead and Undressed is a beat-’em-up game. You’re just some everyday dude in Akihabara (Akiba for short) who got tangled in a secret underworld where mindless, synthetic vampires called Synthisters exist to prey on the otaku who visit the Electric Town. You almost become one yourself, falling victim to a bogus job interview in an effort to score some rare anime goods. You are rescued from mortal danger by a fair damsel who can hold her own in brawls and spared fatality when she, ironically, turns you into a vampire herself, albeit less synthetic and mindless.

Story aside, the entire game is split into two parts. The bulk of the game is the beat-’em-up. To defeat these vampires, you have to expose them to sunlight. How? By stripping them to their undies, of course. Again, if you’re if at all interested in this game, you should know that part already.

Three specific face buttons on the PS3 controller relates to the part of the person you are attacking, be it the head, the body or the legs. Duke it out in melee combat or with an array of weapons in the form of serving trays, laptops, gun replicas and giant leeks. Deal enough damage on those parts and their clothes become vulnerable, ready for you to rob them of their modesty. Holding the related face buttons will perform a strip. Tear them down and they screech as they evaporate into the daylight.

Having to repeatedly mash these buttons in battles gets severely repetitive, especially once you find a weapon that makes these fights easy. You can also bulk yourself up with the clothes that enemies leave behind, purchased through the many shops in Akiba or Get your little sister to combine articles of clothing to make them more durable, for a fee, and better protect yourself against attacks.

If your clothes are whipped into a bad shape, just adjust your clothes with a hold of a button and you’re back in business with full protection, but you won’t get back said protection if your foes strip you of your clothes. This kinda makes the fight rather easy. If you get hit, just run away to the corner and make yourself proper again. There are no restrictions to how many times you can do this.

Deal enough damage with your partner and you can deal a severe blow on one enemy and stun those around you. You can also perform continuous stripping by dealing damage on multiple enemies and holding a combo through quick-timed button presses as they appear on screen. Rack up a killer combo and you perform a strip so powerful you rid them of all their articles of clothing and they stand there naked yet tastefully censored. Kinky.

The other major part to the game is simply the narrative. You watch as the story unfolds in typical visual novel fashion with a touch of a dating sim. You are part of the Akiba Freedom Fighters that is out to stop any trouble that brews in the district. Of course, your close friends stick by you even when you become a vampire and join you in your fight against the Synthisters.

No visual novel would be complete without interaction to the girl characters. Amongst the Freedom Fighters you have Touko, the active-type childhood friend, Kati, the cute foreigner and Shizuku, the quiet vampire girl who saved your life. There’s also Nana, your little sister, but she doesn’t see you as anything other than a bigger brother (This game is not quite like that).

The three other girls are ones you can do fights with, but these are usually predetermined battles with the objectives only fulfillable with a specific girl. The game has several endings, determined by how well you express yourself and support your girl through dialogue. You can’t actually go on dates or experience random fights, leaving the time spent with your hot girl rather meaningless.

Outside of the main missions, you get to do side-missions in the form of fetch quests and battles. These should take no time at all since you can warp to a particular location on the map at any time, even when not actually on a quest.

It’s can be considered odd that advertisements for actual Japanese companies appear during certain loading screens, but these screens don’t appear for very long. That said, the game can be seen as one whole advertisement for Akihabara with references to real shopping outlets such as Kotobukiya, SEGA arcades and Pepper Lunch restaurants.

If you’re a regular otaku who has a thing for anime girls but don’t want to deal with a whole lot of modesty outrage charges, Akiba’s Trip is just entertaining enough for one playthrough. Without all of that, it’s just a beat-’em-up that gets slightly repetitive.