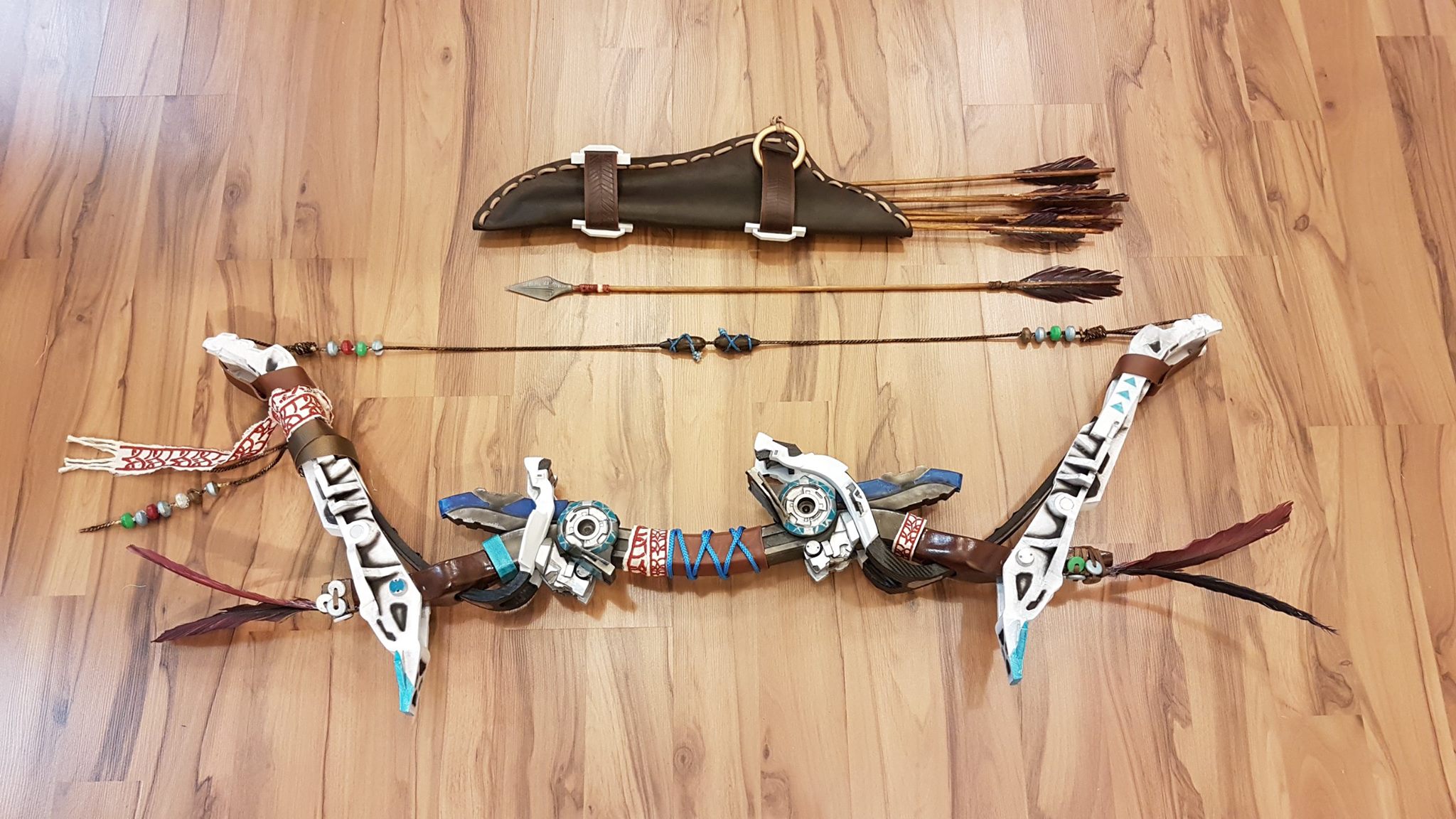 Horizon Zero Dawn is teeming with rave reviews, including our very own, and one of the many striking images associated with the game is that of Aloy and her bow – the “sling” against the mechanical “Goliaths” she faces.

Neo Tokyo Project and Repla recently joined forces to craft said bow, a commissioned project by PlayStation Asia. Details and photos behind its creation were shared in a Facebook photo album. 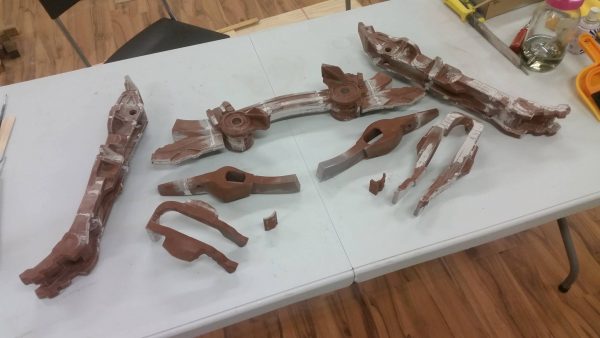 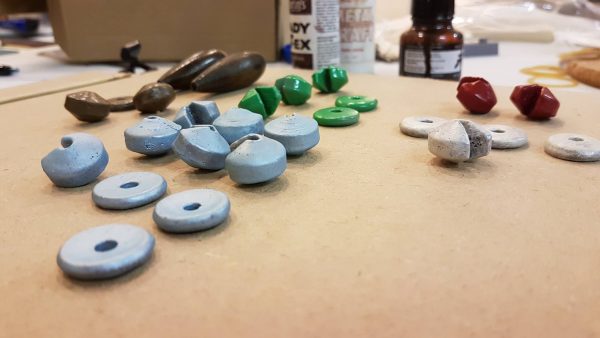 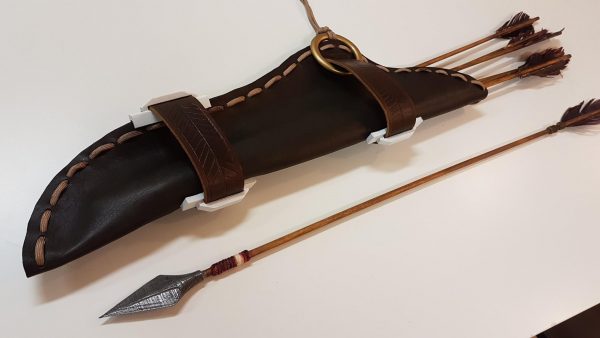 “In all, Lester [from Repla] spent more than 50 hours painstakingly modeling the bow from scratch, taking great care to ensure that it looked as close to the in-game art as possible,” reads the post.

“The parts were then 3D printed over the course of some 160 hours, and finishing the bow – from vaporing, sanding, priming and eventually painting, took another four days of uninterrupted work.”

Naturally, they weren’t content with stopping there. The team used “strips of foam and styrene” to ensure that the bow arms could flex like it did in the game; accompanied it with a hand-crafted quiver made out of vegetable tanned leather; and then supplied a batch of individually fletched arrows that use 3D-printed heads.

The beautiful piece was then matched with an impressive cosplay to promote Horizon Zero Dawn over the weekend. 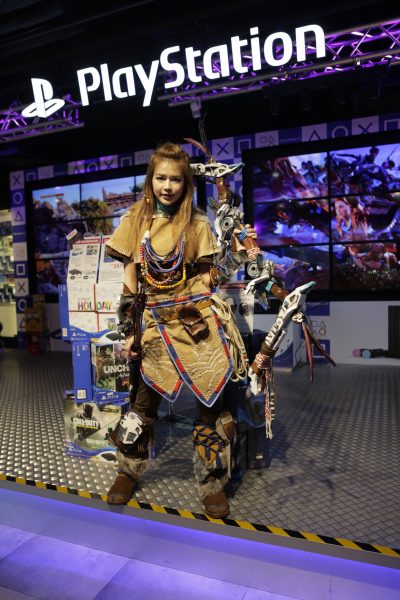 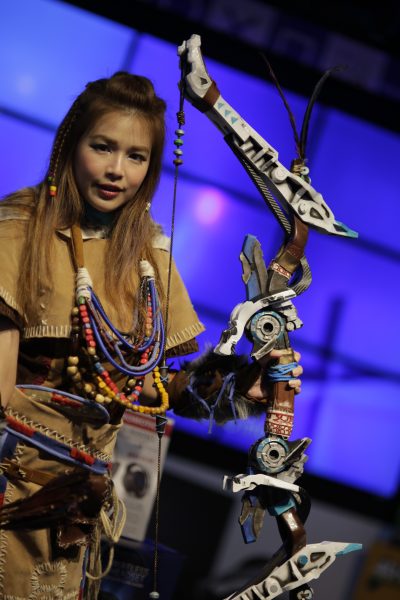 “Bow and arrows play a major role in Horizon Zero Dawn as they are Aloy’s key weapons in her adventure,” commented Ian Purnomo of PlayStation Asia.

“Neo Tokyo Project has a great reputation in crafting high-quality cosplay items for gaming characters, hence we approached them to make Aloy’s weapons. We think the final product is pretty impressive.”

As do we, which is why we bugged NTP’s account director, Jason Koh, to find out more.

“Aloy’s bow is a marvel to behold,” Koh replies. “It’s an amalgamation of so many different materials and textures – metal, wood, fabric, leather and feathers even, so it was really exciting to reproduce it in real life while keeping true to the game.”

For those not in the know, Guerilla Games’ Horizon Zero Dawn presents a future where humanity has fallen by the wayside. Unlike typical post-apocalyptic scenarios, nature has flourished and reclaimed the land, burying ruined cities and long-forgotten technology. Civilization has pretty much regressed to tribes by this point, where bows, pelts, and arrows are more necessity than prop. The twist? An entire ecosystem of what are essentially robot dinosaurs. We’ll let the game explain the rest.

Koh explains that Neo Tokyo Project and Repla work at their co-owned creative incubator called @THEGUILD, set up in May 2016 to bring their artisanal skills to the next level. They’ve since worked on various pop-culture and gaming inspired projects together, with Aloy’s bow being their latest creation.

They “relished the challenge of putting the details, quiver and accessories together” as it called for a variety of tools and techniques, but the trickiest part of the project turned out to be the very first step.

“While we had access to some great references, the bow sported some really complex details and wasn’t symmetrical like you’d expect. Lester from Repla spent a whopping 50 hours painstakingly recreating the bow in 3D software, and we have his experience and skill to thank for the end result.”

He reiterates how getting the bow to flex and pivot proved challenging, and how it was Lester who once again came to the rescue, this time with foam and styrene.

There’s still a chance to catch the full cosplay in action. “Aloy” will be visiting retail stores around Orchard on launch day, February 28, so you can score some photos while picking up the game.

What happens after that is an entirely separate question. Maybe it’ll hang in Sony’s offices. Maybe it’ll be found a thousand years from now. Who’s to say?

We’ll leave with some prop-making advice that Koh has graciously shared:

“Scratch building the bow can be tough if it’s your first try, so don’t be afraid to purchase a toy bow and use it as the base if you need to. It also helps if you break down the materials you need and plan your project in stages. Be patient, and take your time so that your end result will be as close to the source material as possible.”

Ade thinks there's nothing quite like a good game and a snug headcrab. He grew up with HIDEO KOJIMA's Metal Gear Solid, lives for RPGs, and is waiting for light guns to make their comeback.
Previous post Razer Kraken Pro V2 Headset Review
Next post Coffin Dodgers Review – Avoid this one at all cost