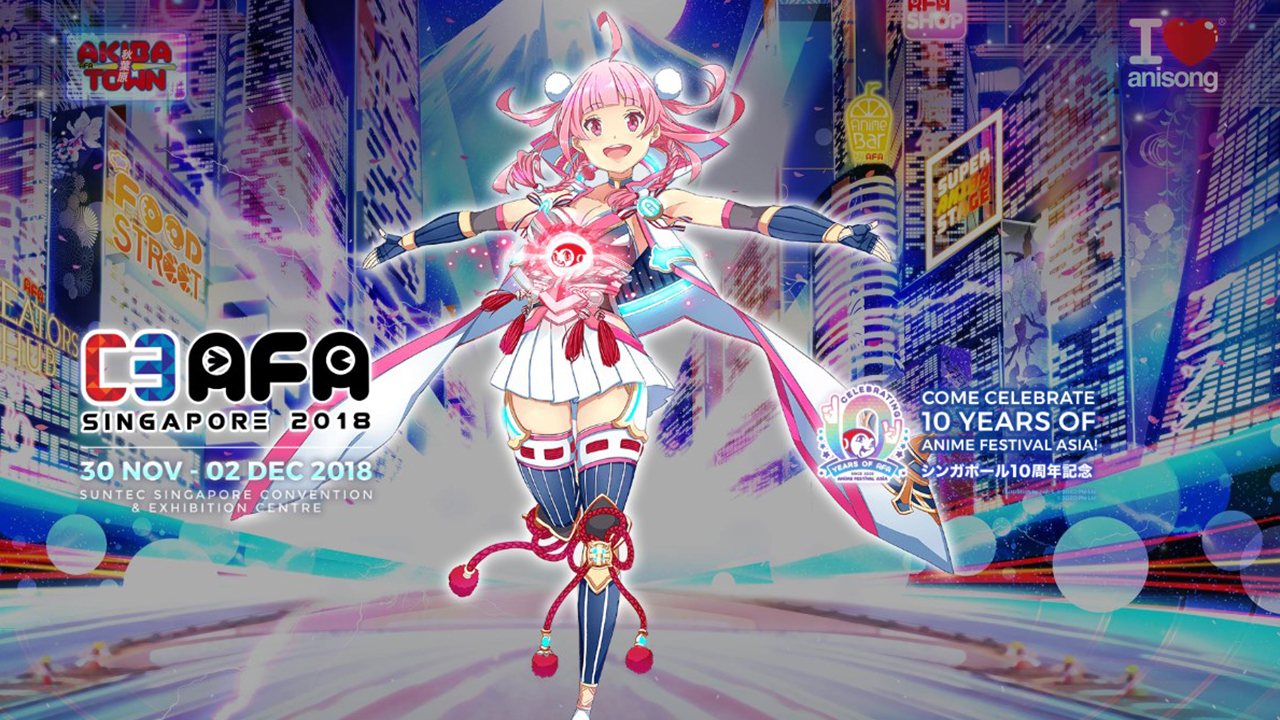 Put on your costumes and ita-bags, it’s time for the annual otaku pilgrimage to Suntec Convention Center. C3 Anime Festival Asia Singapore 2018 opens its doors from 30 Nov to 2 Dec for a weekend of shopping, lightstick waving, and all-out weebery as fans and invited guests soak up Japanese pop culture.

The festival is celebrating its tenth anniversary this year and organizers Sozo have jam-packed the schedule with activities and appearances — and that’s not counting the exhibition with all the food, toys, merchandise, games, music, and more. Yes, you can find appearances by Bandai Namco, Fate/Grand Order, or Shadowverse to name a few.

You can get the full details on the official site but here are a few things to look out for.

Fork up a little more for Day Stage access if you want to catch special guests and screenings up on stage. It’s best to plan your visit based on the stage schedule and work your exhibition time around those, unless you’re chasing after merchandise and other loot.

A definite pick is the Singapore premiere screening of Mob Psycho 100 II, resuming the acclaimed anime adaptation of ONE’s web manga (he also made One Punch Man). This time, our eighth grade psychic has managed to earn the affections of his crush, yet has also drawn greater attention from other supernatural threats. The first season melded a heartwarming tale with spectacular animation and visual creativity, so expectations are positively sky-high for season two.

Premieres aside, there’s something for nearly every anime fan at the Day Stage. Music and voice actress aficionados have Love Live! Sunshine!! and Shoujo Kageki Revue Starlight to look forward to, while those with a soft spot for mecha have Gundam and Frame Arms Girl to distract themselves with. Not to forget the franchise behemoth Fate/Grand Order or the meme-sponge Pop Team Epic, all of which will have special guest appearances.

Just don’t confuse this for the smaller Akiba Stage in the exhibition hall!

With some huge names flying in, ardent fans may get their wallet, cameras, and questions ready for exclusive meet and greet sessions held outside the convention. These are separate, paid activities but you do get autographs, a group photo, and a group Q&A session.

Voice talents Minami Tanaka and Atsushi Abe are the two with their own meet and greets. The 22-year-old Tanaka has contributed to shows such as Wake Up, Girls!, Assassination Classroom, Killing Bites, and Zombieland Saga. She’ll be in Singapore to promote Kakegurui XX, where she plays the sadistic gambler Mary Saotome.

The 37-year-old Abe has a longer list to his name, earning recognition for his work on A Certain Magical Index in the late 2000s. Coincidentally, he’s here to promote the latest season of that show, though you may have also come across his voice in Bakuman, Dagashi Kashi, and Free!.

Last on the list comes as part of the Frame Arms Girl goody bags that are now on sale. They include assorted items such as keychains and acrylic stands, though the bigger appeal is likely the “sweets presentation” by voice actresses Erii Yamazaki and Rika Abe, who play the Materia Sisters and Hresvelgr respectively. You get the group photo and Q&A session too, of course.

Not everything is out to suck your wallets dry. For starters, you wouldn’t want to miss the World Cosplay Summit (WCS) 2019 Singapore Preliminaries on Sunday, as four local teams come in their very best for a chance to represent the country at the global finals in Nagoya, Japan. Alternatively, roam the exhibition halls to see other cosplayers in action, some of whom are invited professionals or local hopefuls vying for the Cosplay Singles Showcase prizes. Either way, be sure to observe common courtesy and ask for permission before snapping away.

Sunday visitors may want to stick around for a red carpet event later that day, too. If you didn’t get to see a few guests or missed earlier photo ops, then be sure to wait by the front entrance of Suntec Singapore Convention and Exhibition Center by 4PM to catch the stars of C3AFASG 18 passing by.

Or take it easy by embarking on the Stamp Rally indoors, where you have to find and collect all 10 stamps in the event hall for a mystery lucky draw. Each station comes with simple activities, and we reckon it’ll tie in to the tenth anniversary celebrations.

#C3AFASG18 It's been 10 Years since the first Anime Festival Asia back in 2008. Check out Seika our mascot with this year's theme and brand new music in our latest festival promotion video! We're all gearing up for the best AFA yet at this year's C3AFA Singapore 2018! Come celebrate with us!C3AFA Singapore 201830 Nov – 02 DecSuntec Singapore Convention and Exhibition Centerhttp://www.c3afa.com/sg18

We’re not touching on the concerts other than to say that they exist — if you’re an anisong fan then you already know who’s performing. Like the Day Stage, these concerts are entirely separate price packages, with VIP tiers available.

Single-day tickets will only be sold onsite (starting from $15) during event days, so best prepare for long queues in the morning!

Ade thinks there's nothing quite like a good game and a snug headcrab. He grew up with HIDEO KOJIMA's Metal Gear Solid, lives for RPGs, and is waiting for light guns to make their comeback.
Previous post Pokemon Let’s Go! sales have zoomed past the 3 million mark
Next post Review – Not for hardcore fans but Pokemon: Let’s Go, Pikachu/Eevee! gets a few things right