Review: Past meets present in the incredible Devilman crybaby 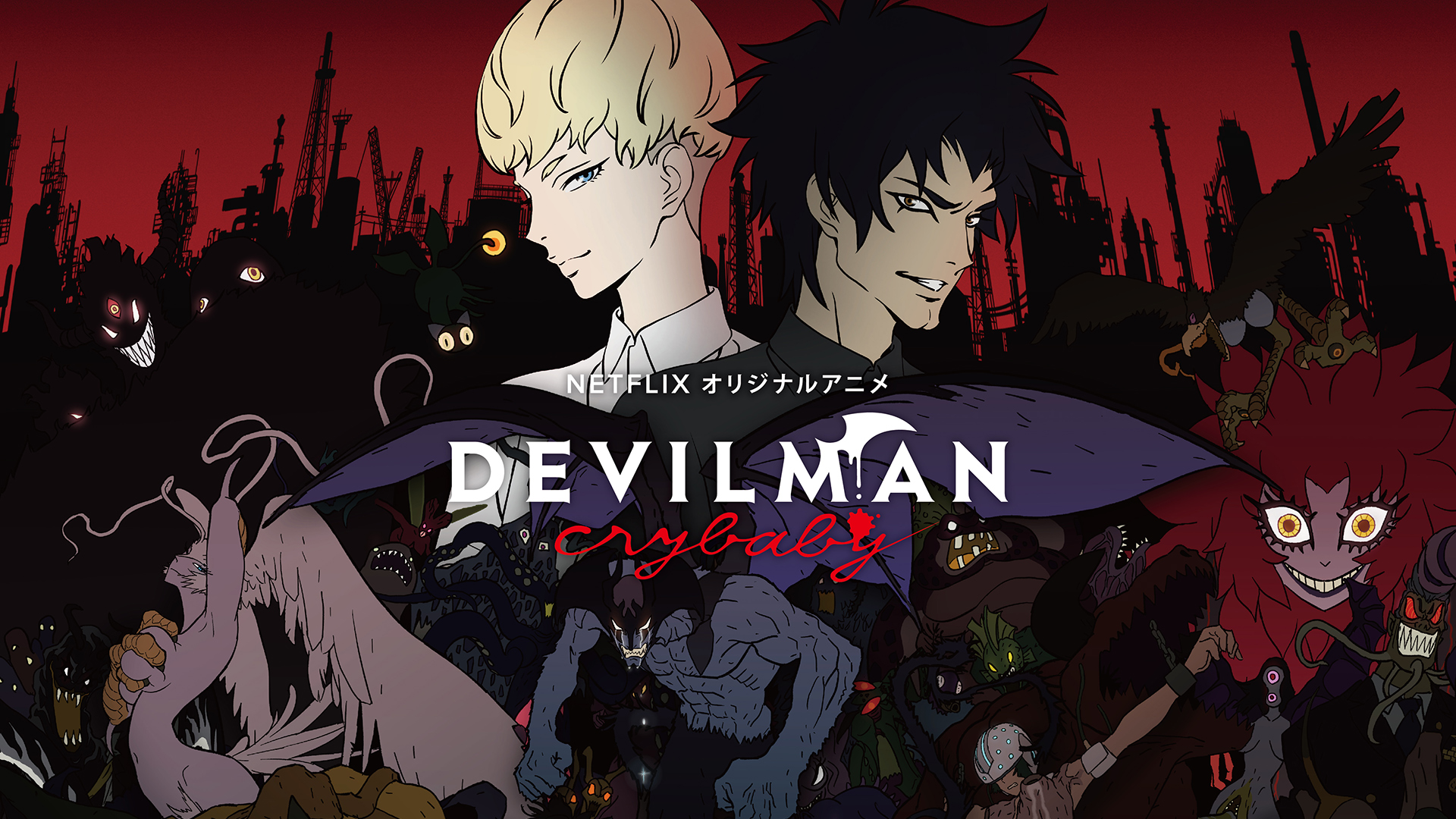 Devilman crybaby is the new poster child of Netflix anime. This ten-episode series simply would not exist, and certainly not to its level of quality, were it not for the streaming service’s involvement. Unbound by censorship, the show is free to explore Go Nagai’s world of drugs, sex, and eye-watering violence, retaining all the heights and horrors that made the manga influential to begin with. Yet against that backdrop of blood and titillation lies a message of love, bruised and battered, framed against humanity’s propensity for evil. Heart-wrenching as it is thought-provoking, this is not your Saturday morning cartoon show.

I say “modern” adaptation because I hesitate to call it a faithful one. Under the visionary direction of Masaaki Yuasa (Mind Game, The Tatami Galaxy), Devilman crybaby deviates from the manga in terms of art design and humor, while also injecting whole new scenes and characterization. What they did leave alone were the major plot points, condensing the entire manga’s story into ten episodes.

Everything begins with two childhood friends, Akira Fudo and Ryo Asuka, whose opposing natures are clear as day. Akira is sympathetic and kind, quite literally the “crybaby” in the title, whereas Ryo is ruthless and cold with a disturbing desire to harm. Despite their differences they get along incredibly well, their friendship a symbolic representation of balance. The two are separated before long, growing up in vastly different environments, only to reunite in their teenage years. This is when things kick into high gear, as Ryo rips Akira from his idyllic high school life in the most over-the-top fashion imaginable: showing up in a sports car, dressed in a white coat, and armed with a machinegun. They’re whisked to a satanic-themed rave where drugs and sex are on the table but clearly not in the schedule. No, what Ryo wants is for Akira to be possessed by a powerful demon, regain control over his body, and then use that newfound power in a crusade against devils.

Those ten episodes are split into two narrative arcs, the first dealing with the stronger, confident, and ravenous Akira as he comes to terms with his new body and the ordeal before him. We frequently cut to a few side characters as well but the whole objective is to flesh out their personalities and motivations. Director Yuasa takes this opportunity to flex his creativity, giving us wholly unexpected moments such as Akira’s sticky situation and a fantastic anime-original rap.

The humor and high-school drama ultimately give way to the mounting demon business, before plunging off the deep end into the grim darkness of the latter arc. It’s here where Devilman’s reputation for hyper-violence rears its horned head, unflinching in its brutality and gore. The show’s master stroke arrives, with much apprehension, in the form of episode nine, before wrapping things up in an apocryphal tenth episode. By that point, it’s evident how the series inspired other influential works such as Berserk and Neon Genesis Evangelion.

The great thing about complete adaptation is that you aren’t left on a cliffhanger or the nagging sense that there’s more. Devilman crybaby ends, leaving no what-ifs or future scenarios to ponder over. However, it wasn’t a particularly satisfying end, mainly due to the sense that we were all rushing to get there.

The breakneck pacing is, without doubt, crybaby’s biggest flaw. These characters go through pivotal, life-changing moments but aren’t afforded the room to breathe before the next story beat steps in. With no time for shock or grief those events end up feeling trivialized and our characters a little less human (demons aside). There are other issues too, such as how Akira gets possessed in the very first episode. That event brings about a huge change in personality, but when the audience barely even knows regular old Akira the effect is somewhat diminished. The same can be said for side characters such as Sirene, a demon that may have brought some interesting background context but winds up being little more than a boss battle.

I can’t help but wonder if those problems could have been fixed by a regular thirteen-episode season. Using an hour-long pilot and spacing out some of the events with those extra forty minutes or so could have calmed things down a bit, but I suspect that wasn’t the case due to the “Netflix binge”. The service knows that people would sit through the entire season over the premiere weekend, and doing it all in one sitting like I did takes approximately five hours. Thirteen episodes would have likely left too many viewers fatigued before the end.

Still, look beyond and you’ll find that there’s plenty to love about Devilman crybaby. Plenty of praise needs to be heaped upon Miki Makimura, a character that has been spun from a two-dimensional love interest in the manga to a strong and important presence in the anime. Already mentioned is a rap scene but there’s more where that came from, just as captivating and catchy. Both also do a great job of modernizing the setting, be it Miki’s online fame or the latter’s social commentary.

Director Yuasa is well-known for his bold visual styles and it’s been used to good effect here. Compared to recent shows, it may not be as experimental as Mob Psycho 100 or as daring as Land of the Lustrous (Houseki no Kuni), but it does have its moments. The psychedelic rave scenes are a bewildering collage of colors and lens distortions, while the possessed are treated to bestial running animations. Admittedly, the palette and style does take some getting used to, with moments where the animation throttles down to a minimum. The odd color for demon blood brings the second arc into question too, though I guess you could say it’s a detail lost in the hysteria.

Allow me to gush over just how good the soundtrack is, which was no surprise once I discovered it’s composed by Kensuke Ushio (A Silent Voice/Koe no Katachi), now free to spread his musical wings. We get a suitably epic theme song in “D.V.M.N.” with its sweeping strings, rousing choir, and hints of brass, but also pounding electronic beats such as “Night Hawk” and “Judgement” or the synth-laden “Miki the Witch”. It’d be a shame not to mention the gritty “Sabbath I” either, or Ushio’s return to piano in “From Here to Eternity”. Go get on that album, Spotify.

Devilman crybaby is not a pleasant show to watch and it’s definitely not for everybody – it earns that R21 rating and then some. Yet that shouldn’t stop the rest from diving into what is a must-watch for anime viewers, be it regular fans or the occasional visitor. At the very least, it’ll provide a fascinating look at a narrative from an entirely different era, one that Japanese committees simply wouldn’t risk funding today. Yuasa’s creative handling of an important adaptation, combined with what must have been complete production freedom, have come together to form what is Netflix’s best anime original to date.

Let’s end on a fun fact: If you thought Go Nagai wasn’t influential enough, he also created Mazinger Z and the idea of pilots inside giant robots. Basically, he was a forerunner in mecha and super robots too.

Devilman crybaby is available now on Netflix.
Prefer something a little more beautiful and bittersweet? You may like Violet Evergarden instead.

Ade thinks there's nothing quite like a good game and a snug headcrab. He grew up with HIDEO KOJIMA's Metal Gear Solid, lives for RPGs, and is waiting for light guns to make their comeback.
Previous post Singapore-made Deck Casters out now on Steam
Next post Nintendo Direct Mini reveals 11 titles coming to the Switch this year